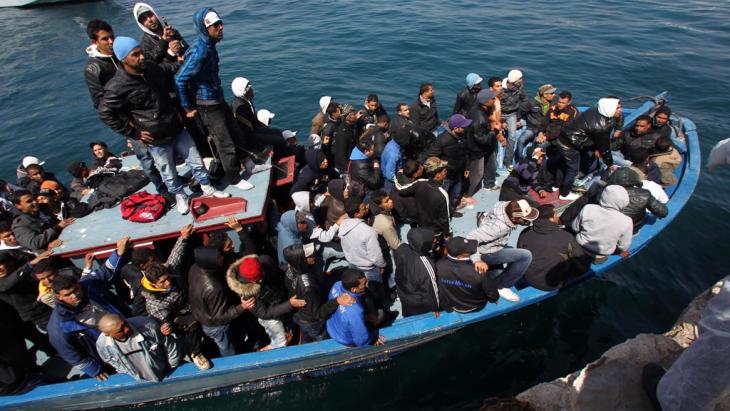 The EU's interior ministers have discussed refugee policy following the catastrophe off Lampedusa - without any result. They've failed to use a good opportunity for a new, more humane policy, says Ute Schaeffer

Politics and reality sometimes don't have much to do with each other - and that's the case with the refugee catastrophe off the coast of the Italian island Lampedusa. It is an intolerable contradiction: while the number of refugees drowning off the coast of Europe keeps increasing - with more than 270 victims' bodies being pulled from just one boat that caught fire and sank last Thursday (03.10.2013) - politicians sit in air-conditioned conference rooms in Brussels and don't take any action. It's cowardly, it's immoral and it's short-sighted.

Just over 100 kilometers of ocean separate Africa from Lampedusa. That means tomorrow we could wake up to the next catastrophe - and Europe knows it.

Let's remember that the poverty people are trying to flee is neither self-made nor chosen. It is created by corruption, war and terror. And it is caused by the trade barriers Europe puts up, by our customs duties and our consumption. 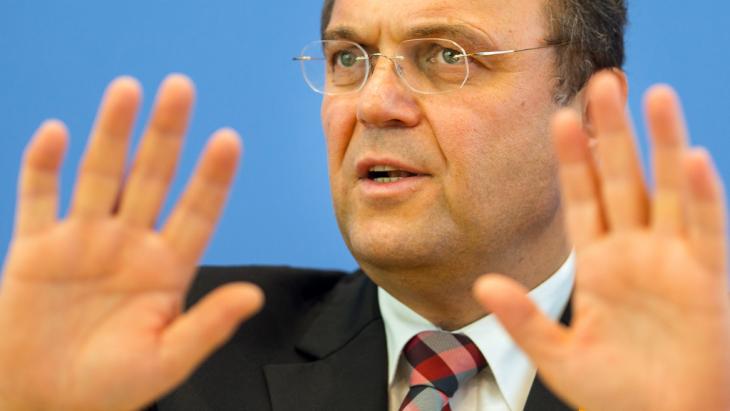 "But nobody dares to push for a new, more responsible and humanitarian EU refugee policy." - Rather than making concrete recommendations, Germany and Germany's Interior Minister Hans-Peter Friedrichsent up a smoke bomb to distract attention from the real issue, Ute Schaeffer writes

Anyone who has spent time with the Nigerians or Senegalese who later find themselves stranded as "illegals" in Morocco or Libya knows that all they want is to get a foot onto European soil. "Do you think that a single one of us would leave if we saw any kind of perspective for our families at home?" a reporter from Germany was asked. No, hardly anyone would risk the trip.

Looking out for one's own

That's where the discussion has to begin. It's seems almost cynical that the only decision EU ministers were able to make at their meeting was to have the European Union's border agency, Frontex, send its patrol boats further out - and thus well beyond Italian waters. We are behaving as if we need to protect ourselves from criminals or pirates.

We owe these people a conscientious review of our asylum and refugee policies. But no one - not in Italy or Germany - wants a serious discussion about the consequences of this tragedy. German Interior Minister Hans-Peter Friedrich, at least, suggested taking stronger action against the traffickers and improving the situation in African countries. But rather than making concrete recommendations, Germany sent up a smoke bomb to distract attention from the real issue. While dinghies and fishing boats are sinking in the Mediterranean, Friedrich talks about the migration of poverty-stricken people from the EU's poorest member states to countries like Germany. That's the signal that Friedrich wants to send: look at the burden that Germany has to shoulder - we can't take any more! 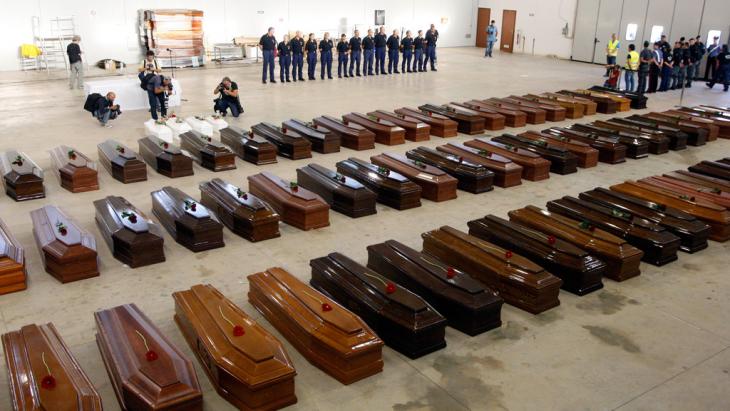 Intolerable contradiction: "While the number of refugees drowning off the coast of Europe keeps increasing - with more than 270 victims' bodies being pulled from just one boat that caught fire and sank last Thursday (03.10.2013) - politicians sit in air-conditioned conference rooms in Brussels and don't take any action," Schaeffer writes

A declaration of moral bankruptcy

As the EU's largest country, Germany hosted more than 70,000 asylum seeker last year, and thus more than many others. But compared to its population of 80 million, Germany's contribution is only average. Sweden, for example, shoulders its responsibility more boldly, more humanely, more decisively: with 4,625 asylum seekers per million population it leads the field. Meanwhile, Germany, which resists any change to European asylum law, manages just 945 refugees per million. And Italy, which is complaining about its burden right now, hosts just 260 per million.

But nobody dares to push for a new, more responsible and humanitarian EU refugee policy. Faced with the latest catastrophes in Italy or Syria, Germany - the country with the largest economy and the lowest youth unemployment - doesn't even have the generosity of spirit to take in more refugees as a one-off gesture. What an indictment of a wealthy nation!

Home
Print
Newsletter
More on this topic
The EU's Migration and Asylum Policy: Not in Line with European ValuesInterview with William Spindler: "Europe Has a Legal Duty to Help"EU Migration Policy: EU Makes Africa Its Deputy Sheriff
Related Topics
European Union (EU), Integration in Germany, Migration in Germany, Policy on refugees and migration
All Topics

Recent efforts to rehabilitate Assad are setting a damaging precedent for accountability, just as the international community is expressing the need to hold Russia to account for ... END_OF_DOCUMENT_TOKEN_TO_BE_REPLACED

Nouara may be 65, but she is ready to join thousands of others who burn their ID and pay traffickers for the chance of a new life in Europe. Zineb Bettayeb reports END_OF_DOCUMENT_TOKEN_TO_BE_REPLACED

Education for girls and women is still possible in Afghanistan, says Reinhard Eroes of the Kinderhilfe Afghanistan initiative. In interview with Elisa Rheinheimer, he talks about ... END_OF_DOCUMENT_TOKEN_TO_BE_REPLACED

Locals in the Middle East have said European critics are showing bias and hypocrisy when they condemn Qatar. Observers agree that Qatar has had to deal with more criticism than ... END_OF_DOCUMENT_TOKEN_TO_BE_REPLACED

In Doha, Arabs from Morocco, Tunisia, Egypt and Algeria are gathering to celebrate the first ever FIFA World Cup to be held on Arab soil. The criticism from Europe? Over the top, ... END_OF_DOCUMENT_TOKEN_TO_BE_REPLACED
Author:
Ute Schaeffer
Date:
Mail:
Send via mail

END_OF_DOCUMENT_TOKEN_TO_BE_REPLACED
Social media
and networks
Subscribe to our
newsletter