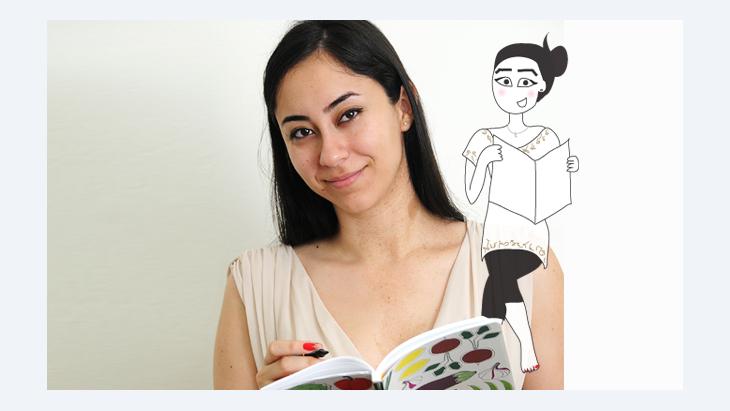 Illustrations against Ignorance and Oblivion

The young Lebanese graphic designer Maya Zankoul projects a differentiated picture of her home country in her humorous cartoons – rejecting media stereotypes of bombs, war and terror. An interview by Juliane Metzker

Ms Zankoul you were born in Lebanon but grew up in Saudi Arabia. Why did you return to your country of birth?

Maya Zankoul: Because I am Lebanese. My father used to work in Saudi Arabia so we all grew up there until I was 18. Then I came back to Lebanon to study graphic design. For me it was always my dream to return to my home country. Since I lived in Saudi Arabia, I had a really romantic view of Lebanon. For me it was the country of family holidays and freedom.

And do you still have this romantic view?

Zankoul: (laughing) Of course not. I had a kind of culture shock when I arrived. Vacations here were really fun. But when you live and work in Lebanon you start to notice that things are more difficult to handle. For example there is a major lack of infrastructure – no public transport, power cuts, water problems and political tensions. And I felt: We have a lot of work to do. 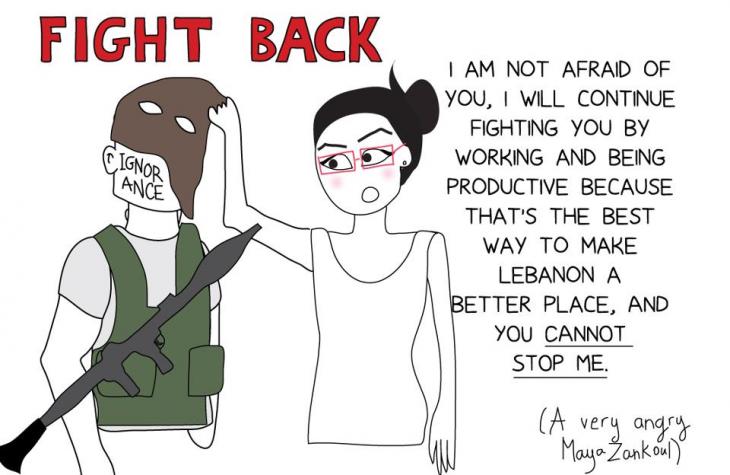 Fighting back by unmasking ignorance: "After all that Lebanon has been through, people who fight in the streets are just ignorant," Maya Zankoul says

You illustrate yourself as a kind of 2-D " Maya Zankoul " who is always in the midst of the action. Where did the idea for your cartoons come from?

Zankoul: I did my first drawing when I travelled with my sister and brother to Spain. It made them laugh. This made me happy so I started to draw about things that happened to me every day – really simple illustrations about the traffic and electricity problems. I shared them with my friends and their reactions were really positive. The images illustrate everyday situations but seeing them in a cartoon was new. This is why I am having fun in stating my opinion.

Why do you publish most of your cartoons in English not in Arabic?

Zankoul: At university and at work we only speak English. Actually I am not very good at Arabic. It was natural for me to use English for my comics. Plus I was able to reach a wider audience and show a different image of Lebanon than the one that is broadcast in the international media.

Your illustration "Lebanese Reactions after an Explosion" shows six different characters reacting to a terrorist attack in Lebanon. Their behaviour ranges from shocked to bored to patriotic. You created the image after the suicide bombings in front of the Iranian embassy in Beirut in November. It was very popular on Twitter and Facebook. Are these typical Lebanese characters?

Zankoul: Of course they are. Since I moved back to Lebanon in 2005 there have been something like 100 explosions. So we reached the point where it has become a kind of routine for us. On the day of the bombings I logged onto Facebook and observed how people were commenting on the bombings. And I found so many conflicting reactions. Some were sad and others were just bored, like: "Oh, another explosion...". I thought, ok, let's put this into a cartoon and see how people react. It got shared a lot proving that people could identify with it. I don't know if this is good or bad. People who are used to explosions are definitely not a good thing, but it's reality. 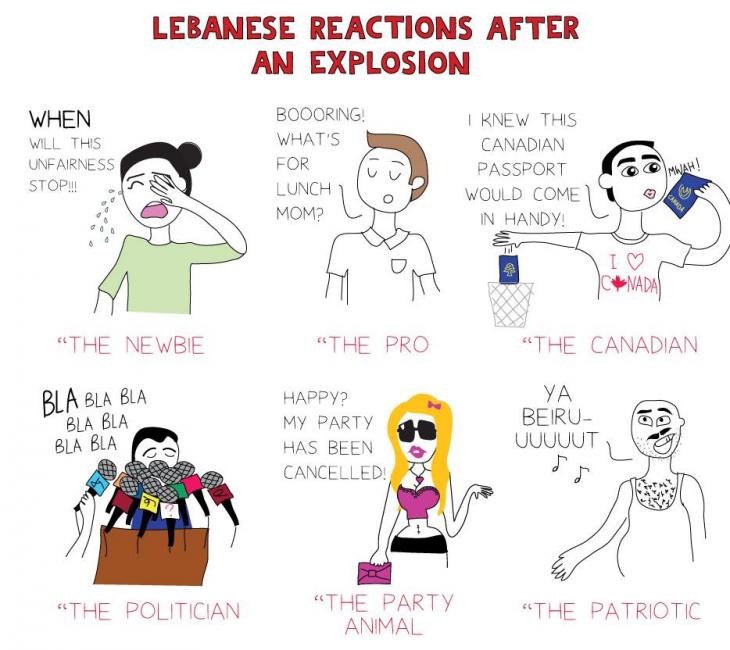 Yet another explosion? - "Since I moved back to Lebanon in 2005 there have been something like 100 explosions. So we reached the point where it has become a kind of routine for us," Maya Zankoul explains

"Fight Back" is one of your more serious illustrations. It shows you pulling down the black mask of a militia fighter, and where his face should be the word "Ignorance" appears. The image is signed by "A very angry Maya Zankoul". What exactly is the idea behind this cartoon?

Zankoul: In October 2012, after the attack in the middle of Beirut even civilians picked up weapons and took to the streets, burning tires and shooting. I was very angry. Everyone was afraid and stayed home. I thought by doing this we are just confirming these people in their cause. So this is why I created the cartoon. It was my way of saying we should fight back and not hide at home. We should go out and continue our lives normally. My point is: After all that Lebanon has been through, people who fight in the streets are just ignorant.

How do people react to your art?

Zankoul: I have received a lot of positive feedback over the years. People tell me that the drawings make them feel better. The cartoons have actually affected them. Sometimes when people are walking in the streets they think of my images and are reminded that some "normal" situations are actually unacceptable. We cannot continue like this. Surprisingly I haven't received any major negative comments. 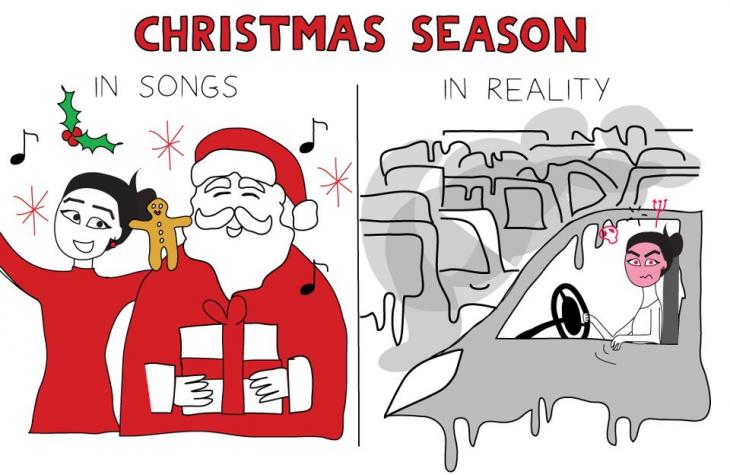 Merry Christmas? - "When you live and work in Lebanon you start to notice that things are more difficult to handle. For example there is a major lack of infrastructure – no public transport, power cuts, water problems and political tensions. And I felt: We have a lot of work to do."

You host a show on Lebanese television about computers, the Internet and social media.

Zankoul: I have a weekly show on local TV called "B Wa2ta" teaching women who stay at home how to use social media to promote their work. Because a lot of Lebanese women in their 40s or 50s don't use the Internet. Before the show my mother didn't even have an email address. Now she is even on Facebook. I feel this has made her even more emancipated.

Are you concerned about women's rights in Lebanon?

Zankoul: I would almost consider myself to be a feminist. I think we have a long way to go with women's rights in Lebanon. These rights are basically not available. Imagine: A Lebanese woman who marries a foreigner does not have the right to pass her nationality on to their children. The treatment of women in the workplace, domestic violence and equality are important topics to me.

Compared to other countries in the Middle East, Lebanon is widely seen as enjoying a certain freedom of expression. However, have you ever hesitated to publish a cartoon because of possible negative reactions?

Zankoul: No. The cartoons are a platform for me to say whatever I want. Unlike in other countries, in Lebanon bloggers are not arrested and tortured. Occasionally someone is questioned by the police but released the same day. I would never publish something disrespectful. I just state my opinion in a civilized way and that shouldn't be a reason to get arrested.

The rollout of coronavirus vaccines in the Middle East and North Africa is already taking place on a massive scale, with the United Arab Emirates leading the way. Nevertheless, ... END_OF_DOCUMENT_TOKEN_TO_BE_REPLACED

A childhood and youth in Beirut, a life lived between Lebanon, Switzerland and Germany, and a unique voice in Arabic-language literature: "Beirut für wilde Mädchen" sees Lebanese ... END_OF_DOCUMENT_TOKEN_TO_BE_REPLACED

Surging coronavirus cases in many parts of the world have overshadowed the start of this year's Muslim holy month of Ramadan, with festivities once again curtailed by contagion ... END_OF_DOCUMENT_TOKEN_TO_BE_REPLACED

German Middle East analyst Guido Steinberg and television journalist Ulrich Tilgner have both published new books on the conflicts in the Middle East. Their analyses and their ... END_OF_DOCUMENT_TOKEN_TO_BE_REPLACED

The famous temples of Baalbek, the ancient Heliopolis in Lebanon, are one of the largest Roman religious sites in the world and a World Heritage Site. The app "Baalbek Reborn: ... END_OF_DOCUMENT_TOKEN_TO_BE_REPLACED

The Syrian war has moved through many phases and included a number of changing actors. But one aspect has remained constant throughout: the Assad regime is using the conflict to ... END_OF_DOCUMENT_TOKEN_TO_BE_REPLACED
Author:
Juliane Metzker
Date:
Mail:
Send via mail

END_OF_DOCUMENT_TOKEN_TO_BE_REPLACED
Social media
and networks
Subscribe to our
newsletter