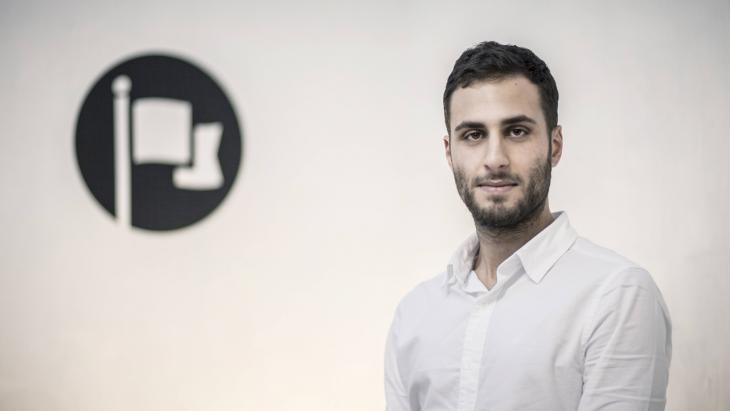 The Lebanese magazine "The Outpost"

Road map to an uncensored world

The pan-Arab magazine "The Outpost" is produced on a quarterly basis in Beirut. Only one year after its establishment, it is already attracting international attention. Astrid Kaminski took a closer look at the magazine and spoke to its editor-in-chief, Ibrahim Nehme, about its success

The story of Gustave Courbet's 1866 painting "L'origine du monde" (The Origin of the World) could fill an entire adventure novel. It leads from the villa of an Ottoman diplomat, to a Hungarian vault, to the country house of the psychoanalyst Jacques Lacan, and finally to the Musée d'Orsay in Paris. To this day, the image, which focuses on a vulva, is often censored when it appears as an illustration.

How strange, therefore, that its title – albeit without the image – has served as inspiration for a children's book of all things. "L'origine du monde" was the name of the lovingly illustrated story that was included with the first edition of the Beirut magazine "The Outpost, a magazine of possibilities".

In the story, author Raafat Majzoub sends little Gamal on a journey to discover everything that cannot be learned back home at school. Flying, for example, or how to make notebooks out of "paper soup" or even how two women can start a family.

Gamal's wonderful story is available to multipliers for free download. The clear message here is that people are the origin of the world. It is also the engine that powers the entire "magazine of possibilities". 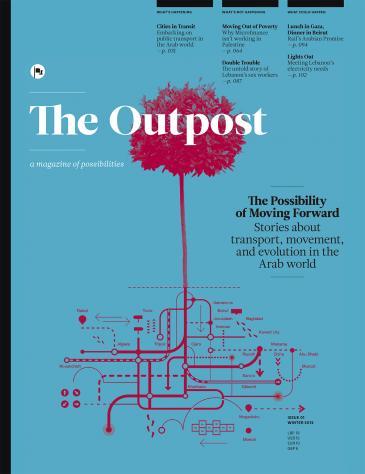 "The Outpost": the self-named, Beirut-based "magazine of possibilities" that targets "World Makers" and wants to change the Arab world

Children are not actually the "The Outpost's" target demographic; instead, this educational tale symbolises the makers' idealistic desire to change things. They want to restructure the Arab world from the ground up, tear down walls, create new perspectives and cultural values, and stake a claim for functionality. "We are expected to become experts at waiting, like our parents were. But we have waited long enough ..." This is one of the many sentiments expressed in the current issue.

This magazine is hard to ignore. The main reason for this is its appearance. It looks as though it was created in some sort of hip graphics lab; a model magazine that is too good to be true. Immediately following the first issue, "The Outpost" was nominated in the categories "Best Magazine" and "Best Design" by the worldwide magazine platform Magpile.

Markus Peichl, chairman of the LeadAwards for media design, which are presented each year in the German city of Hamburg, has been an "Outpost" reader from the start: "It's been a long time since I've held a publication in my hands that immediately made me think: something's happening here! And this one certainly did."

Germany is the largest market for the English-language magazine outside the Arab world. It is already being sold at five different outlets in Berlin. In the Arab region, Lebanon and Dubai are the biggest markets so far.

The makers wanted to create an "artistic artefact", something designed to enhance the quality of life with its content and character. Pleasure here comes from an adept mixture of creative journalism and design, which is executed in Spain. Santos Henarejos and Gema Navarro have developed a playful infogram style, a combination of diagrams and pictograms that used to navigate, illustrate and also narrate.

The choice of language is surprising, considering the quarterly magazine's pan-Arab focus. It targets "World Makers", as they are referred to in the editorial, who are ready to build a new, democratic Arab world and willing to follow an "uncensored road map to the world of our dreams".

Editor-in-chief Ibrahim Nehme explains who these "World Makers" are: "First of all, we are targeting a young audience that consumes most of its media in English anyway, as this allows them access to better, more independent journalism. Additionally, readers in countries outside the Arab world are also a factor. Insofar as our finances permit it, we hope to make Arabic translations of the texts available in a next step."

"The Outpost's" pan-Arab content is based on a negative appraisal of the present situation: stagnating politics, religious fanaticism, the destruction wrought by war, as well as the total collapse of justice and morality are all factors cited by Nehme in his editorial in the third issue. Such a "hostile place to live" is an odd basis on which to found a "magazine of possibilities", he writes, but it is, of course, what makes such a move necessary in the first place.

Overview of the political theatre scene 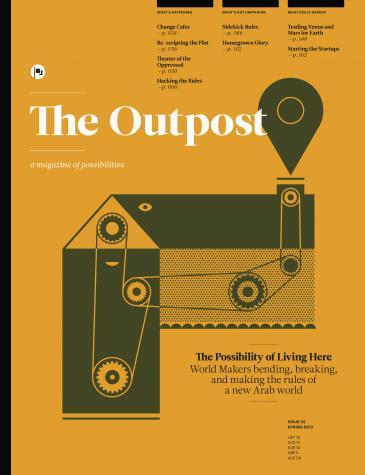 Unconventional and expressive: "This magazine is hard to ignore. The main reason for this is its appearance. It looks as though it was created in some sort of hip graphics lab; a model magazine that is too good to be true," writes Astrid Kaminski

"The Outpost" does not yet possess a political media license, and that could potentially become a problem. Anyone setting out to change society quickly ends up in the field of politics.

The magazine covers studies on laicism and freedom of religion and an overview of the current political theatre scene in the same detail as concrete opportunities for the temporary occupation of buildings, a hacker space in Baghdad, a crisis centre for Syrian artists and the life of a transgender individual in the Arab Emirates.

Difficulties arise when the focus turns to the Israeli–Palestinian conflict. "The Outpost" adopts a decidedly pro-Palestinian stance, which goes as far as to include maps that define the entire disputed territory as Palestine.

The intention here is to counter the Israeli narrative that is so often unquestioningly accepted by Western media, explains Nehme. In his opinion, the quest for a Palestinian viewpoint must come before a dialogue that is weighed down by preconditions.

But might this provocative approach entail the risk of formulating a pan-Arab perspective that is based more on common resentment than common necessities? This is not at all the objective of "The Outpost", and so it remains to be seen what direction the empathetic and progressive texts will take.

Lifestyle topics also feature in the magazine. In the first issue, utopian cities were built using the best areas of a number of Arab cities. In the third issue, step-by-step guides to the art of Oriental brick buildings as well as an explanation of the Jordanian peace machine (an ecological roof installation) bring joy to the hearts of DIY enthusiasts, just as the wellness factor of "Change Cafés" will make the eyes of media artists and those in the creative field sparkle.

For the magazine's first birthday, the editor-in-chief received the best present a romantic could imagine. In a stack of old books by the side of the road, he found a cheque from the "Banque of Happiness & Peace", conferring on the recipient 365 days of happiness. The cheque dates from 1974, the year of the outbreak of the Lebanese civil war. This talisman – a witness to all the events in the intervening period – now graces the cover of the current issue.

* This article was amended on 25 March 2014 following clarification of the last sentence by the author.

Home
Print
Newsletter
More on this topic
The Lebanese satirical magazine "Ad-Dabbour": Hornets' nest in BeirutEgypt in Turmoil: Against the Tide of HatredThe Art Magazine "Bidoun": Publishing Art from Three Corners of the World
Related Topics
Arabic literature, Dialogue of Cultures | Intercultural Dialogue, Media in the Arab World, Places of Dialogue
All Topics

Insults directed against Egyptian President Abdul Fattah al-Sisi have been particularly prominent among the hundreds of chants by Arab protestors in Algeria, Sudan, Iraq and ... END_OF_DOCUMENT_TOKEN_TO_BE_REPLACED

Michael Frey has written a fascinating book about the contemporary political thinker Nassif Nassar. Since 1967, Nassar has devoted his life’s work to the question of a fair social ... END_OF_DOCUMENT_TOKEN_TO_BE_REPLACED

Today's in-fighting over the composition of the country's next cabinet is part of a larger battle for a new political settlement. The financial crisis poses a mortal danger to the ... END_OF_DOCUMENT_TOKEN_TO_BE_REPLACED

The upheavals of the past year in the MENA region are arguably as momentous as those of the Arab Spring in 2011. Yet perhaps the biggest difference is that our interest seems to ... END_OF_DOCUMENT_TOKEN_TO_BE_REPLACED

Beirut usually sparkles and dazzles at Christmas time. This year, marked by major protests, however, everything has been turned on its head: there is a distinct lack of Christmas ... END_OF_DOCUMENT_TOKEN_TO_BE_REPLACED

In the heart of Beirut's manicured downtown, something is stirring in a bullet-pocked concrete shell of a building known as "the Egg": the visually unappealing Egg has advanced to ... END_OF_DOCUMENT_TOKEN_TO_BE_REPLACED
Author:
Astrid Kaminski
Date:
Mail:
Send via mail

END_OF_DOCUMENT_TOKEN_TO_BE_REPLACED
Social media
and networks
Subscribe to our
newsletter