The Libyan Opposition against Gaddafi
All Power to the Tribes

The opposition movement that emerged from Benghazi has entirely changed the role and appearance of the opposition. The exile opposition, which once spoke for the Libyan people in the cities of the world and set the tone, has become insignificant overnight. An analysis by Hanspeter Mattes

​​ Since the "February 17 Revolution" the Libyan opposition has gone through drastic changes, both in its weighting between domestic and exile activists and also in its composition. What has remained the same is the lowest common denominator: the end of the Gaddafi regime and the strong fragmentation of the opposition. Its spectrum ranges from monarchists to pan-Arabists to Islamists, human rights activists and adherents of Western political models.

The "September revolution" led by Muammar al-Gaddafi deposed the Sanusi monarchy on 1 September 1969, with the official aim of righting injustices and developing Libya. Gaddafi and his confidants set the course for this development in his speeches, his "Green Book" as an ideological instruction manual and other documents. The Revolutionary Command Council passed a "law for the protection of the revolution" as early as December of 1969, defining resistance against its measures as counter-revolutionary, to be punished under certain circumstances with the death penalty.

There were numerous executions in Libya, particularly in the early 1980s. However, even those who fled the country at that time were not safe in exile, persecuted and murdered by revolutionary committees in Rome, London, Bonn and elsewhere. There are more than thirty political murders on file.

It is no coincidence, then, that many opposition groups were founded by Libyans in exile – mainly in the USA and UK – in the years of the militant revolution from the late 1970s on. Their goal was simply to put an end to the revolutionary regime. Examples include the Libyan Democratic National Movement (1979), the Islamic Group (1979), the Democratic National Libyan Front (1980), the National Front for the Salvation of Libya/NFSL (1981) and the Libyan National Struggle Movement (1985).

​​ Not all of the total of more than twenty-five exile organisations, however, were significant. They have also been prone to in-fighting and only managed to hold two national conferences (London 2005 and 2008). The most significant of the groups was the NFSL under its Secretary General of the time, Ibrahim Sahd, and the Constitutional Union under Mohamed Ben Ghalbun. The latter has a monarchist agenda and is active in eastern Libya, with the support of the Sanusi crown prince Mohamed ibn Sayyid Hasan al-Sanusi. The flag of the Sanusi monarchy has now even become a symbol of the opposition movement.

Significance of the Islamist opposition

Within Libya itself, the most active opposition to the regime since the 1990s came from the ranks of the military and the Islamist groups. Following revolts in the armed forces over pay and deployment issues in 1977 and 1980, military men from the Warfalla tribe began a rebellion in March 1993, aiming to topple Gaddafi and above all to place Warfalla men in high military posts and political offices.

The six leaders around Colonel Gharum were executed in 1997. In March 1997 Gaddafi also had parliament pass a "code of honour", imposing the collective withdrawal of state services upon tribes that fail to prevent opposition activities by their members.

A far more significant threat to the regime, however, was the Islamist groupings such as the "Libyan Islamic Fighting Group" and the "Islamic Martyrs Movement", which formed in the early 1990s around a core mujahideen who had returned from Afghanistan. They fought an offensive armed struggle for the establishment of an Islamic state and the deposal of the "heretic" Gaddafi, in the end falling victim to the machinery of repression and either killed or arrested.

It was only Saif al-Islam al-Gaddafi who succeeded in freeing the imprisoned Islamists in the course of his national reconciliation policy, with the last 113 prisoners released at the beginning of 2011.

The opposition since the February 17 Revolution

Persistently revolting against the odious repression of Gadaffi's regime: It was mainly Libya's young generation from the tribes and major families who were involved in organising the protests

​​ The opposition movement emerging from Benghazi has entirely altered the role and the appearance of the opposition. The fact is that the exile opposition, which spoke on behalf of the Libyan people in the cities of the world and set the tone in the past, has become insignificant almost overnight. The only exception is the monarchist exile group. In most European capitals, the members of this opposition movement are now leading the anti-Gaddafi protests and have taken control over a number of embassies.

The opposition has changed its profile within the country as well. Seeing as the entirety of eastern Libya has been liberated from the Gaddafi regime in the space of two weeks, the remnants of the old regime now make up the opposition there. The victorious uprising movement is now organised and institutionalised in local committees in every locality and in a National Transition Council on a regional level as of 27 February. This movement is dominated by tribes strongly anchored in local society: the Zuwaya, Ubaidat, Awlad Ali, Awaqir and many more. 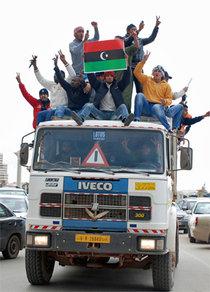 Inevitable instability: Although the uprising movement in eastern Libya has been successful in overcoming Gadaffi's reign, the country's opposition is highly fragmented

​​ It was mainly Libya's young generation from the tribes and major families who were involved in organising the protests, along with the Benghazi lawyers' association. Yet the decisions in the new councils are being made by the tribal sheikhs or their delegates. The same applies to the newly arising military committees, in which the defected officers from the dominant tribes have the say – this time in the service of the February 17 Revolution.

In the west of Libya, the opposition movement has taken on a similar form, be it that the majority of tribes have disassociated themselves from the Gaddafi regime since 20 February, or that independent groups have formed such as the "Youth of the February 17 Uprising" in Tripoli.

Yet although the uprising movement in eastern Libya has been successful, it has so far achieved only the lowest common denominator for the Cyrenaica region – the end of the Gaddafi regime.

The actual debate over the future of the country – apart from the end of the Gaddafi regime – is yet to come in western Libya: will the country become a monarchy or remain a republic? Will there be a presidential system or a parliamentary democracy? How strong a role will religion play in the state? Will the centralised state concede power to decentralised units? What will be the relationship of state economy and market economy? And what rights will be granted to women and minorities? All this has yet to be decided, making a period of instability inevitable.

The Maghreb expert Dr. Hanspeter Mattes is Deputy Director of the GIGA Institute of Middle East Studies in Hamburg. His research areas include the development of political institutions and transformation processes in Libya and other Maghreb states.

The EU and Libya
Europe Should Take a Stand against the Gaddafi Regime
After the successful uprisings in Egypt and Tunisia, the people of Libya are now also trying to free themselves from totalitarian rule. Ute Schaeffer considers how Europe should respond to this movement

The term "Tuareg" refers to tribes and nomads who speak dialects of Tuareg and live in Targa, an area in south-west Libya recently renamed Wadi Al-Hayat but previously known as ... END_OF_DOCUMENT_TOKEN_TO_BE_REPLACED

The Islamic Republic has been unable to quell the civil unrest that erupted three months ago, after Mahsa Amini died after being detained for violating hijab rules. Now the ... END_OF_DOCUMENT_TOKEN_TO_BE_REPLACED

Cries of "Benghazi!" still resonate across the USA ten years after a deadly terrorist attack in Libya killed the U.S. ambassador and three other Americans. Ethan Chorin re-tells ... END_OF_DOCUMENT_TOKEN_TO_BE_REPLACED

After a two-year hiatus, the Arab League re-convened at the beginning of November in Algiers against a backdrop of uncertainty and discord. By Pierre Boussel END_OF_DOCUMENT_TOKEN_TO_BE_REPLACED

In the run-up to the COP27 global climate summit, hosted by Egypt in November, it is worth noting that little rainfall, aggressive heatwaves and worsening drought make the Middle ... END_OF_DOCUMENT_TOKEN_TO_BE_REPLACED

The southern shores of the Mediterranean Sea are losing sand faster than almost anywhere else. The ecological and economic damage is immense. The good news is, there are ways to ... END_OF_DOCUMENT_TOKEN_TO_BE_REPLACED
Date:
Mail:
Send via mail

END_OF_DOCUMENT_TOKEN_TO_BE_REPLACED
Social media
and networks
Subscribe to our
newsletter