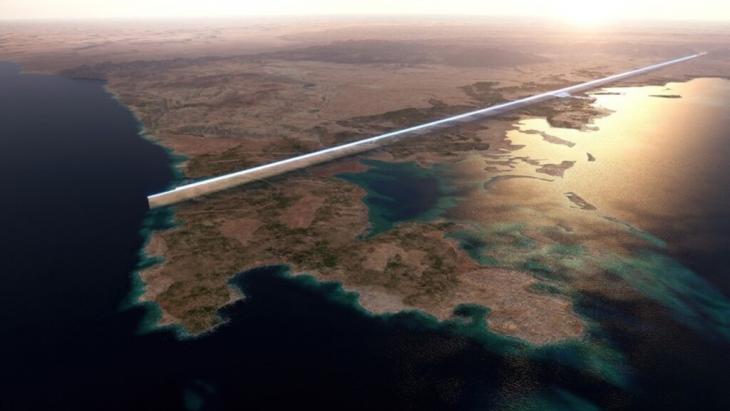 One vociferous sceptic of this superlativistic urban planning utopia – branded absurd and crazy on the one hand (say the cantankerous sceptics), but also grandiose and futuristic (say the euphoric devotees) – is a certain Mahavir Bhakta. In "The Line", the concept of utopia is currently experiencing an ecstatic, but potentially merely mind-bending update. Social media and various design platforms are currently in a heightened state of alarm. Bhakta pronounces, rather grouchily, yet also with a refreshing degree of irony: "As a SimCity expert, I’m predicting problems with fire protection." With a smiley to boot.

As a reminder: SimCity is an outmoded computer game in which players build a city according to the Pippi Longstocking principle. With no regard for any constraints, in a playful, whimsical manner – "just the way I like it”. In the case of Neom, Pippi Longstocking is His Royal Highness Mohammed bin Salman al-Saud. Or MbS for short. Incidentally, that’s also the abbreviation for Germany’s Mittelbrandenburgische Sparkasse or Savings Bank of Central Brandenburg. But that’s where the similarity ends. Only one MbS is linked to mountains of cash, an immoderate desire for power, visionary donations and delirious rate-of-return fantasies – as if under the influence of drugs.

As Crown Prince of Saudi Arabia and chief planner of the Saudi smart city "Neom" on the Red Sea, of which "The Line" is the centrepiece, MbS – who, according to the CIA should be correctly addressed, not only as HRH, but also as someone suspected of ordering a contract killing – has just presented the next phases of the project to a still astonished global public. The global public is still astonished because the entity was first branded a futuristic ideal city back in 2017.

And because the key component of the plan – a titanic “Line” (of cocaine?), which could one day appear as though the good Lord had left his ruler in the desert between the city of Tabuk and the Red Sea – is evidently now to be realised as a 170-kilometre long, 200-metre wide and 500-metre tall spatial continuum. For up to nine million residents. 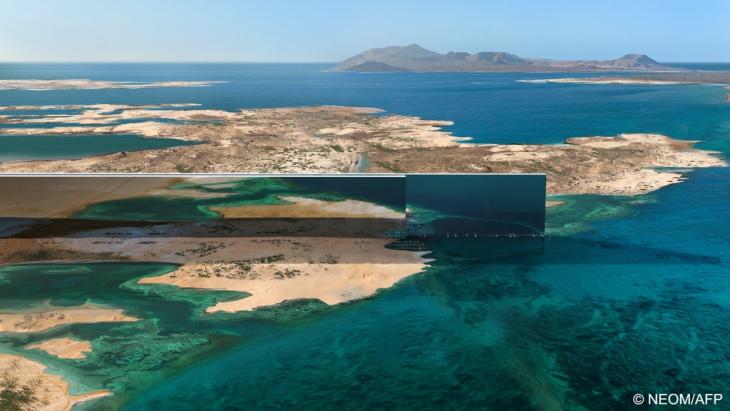 The key component of the plan – a titanic “Line” (of cocaine?), which could one day appear as if the good Lord had left his ruler in the desert between the city of Tabuk and the Red Sea – is evidently now to be realised as a 170-kilometre long, 200-metre wide and 500-metre tall spatial continuum. For up to nine million residents

What was announced last year, at the time still as a series of various spatial centres (analogous to the ribbon-city idea of urban planning history), and now being presented as a single gargantuan building unique even in this crazy world, is one autocrat's febrile dream of a carless eco-city, fed by renewables in the post-petrol future-oriented Orient. The plans for this have only just been concretised.

What is there to say? The project has on the one hand become more realistic, and on the other, even more crazy. But it’s a kind of craziness that’s interesting. It provides the ideal context to pose the crucial question: is the city as we know it facing its foreseeable end as climate killer no. 1? If it cannot reinvent itself: yes.

Online enthusiasts believe the tradition has already reached its demise. A brief summary of their reactions sets the tone: "this is brilliant", "amazing", "go for it MbS!", "wow", "great", "this is the future". Is it? Do Neom – and "The Line" encompassed within it – mark the future of urban planning in the post-democratic, terribly draining and time-consuming participatory era of climate change?

A city as large as Belgium

As a word invented by urban planning marketeers, Neom is a sum of the parts "neo" and "m". One is borrowed from Ancient Greek and represents the new, the other draws on Arabic and means the future (mustaqbal). So, the planned city with adjoining technology park and airport in the northwest of the country, situated not far from the Gulf of Aqaba on an area the size of Belgium, is – after all, more is more is more – obligated to the new, indeed the newest future of all. Yet it remains very reminiscent of the gigantomaniacal planned cities of yesteryear.

The project is expected to cost hundreds of billions, potentially even trillions, though it shouldn’t matter whether the currency is dollars, euros or Saudi riyals. For this kind of investment, which no can currently put a serious figure on, the Saudi royal family is looking for a first-class ticket to the future of the urbanised world, designated as an economic zone all of its own. That the new future is either green, or green-tinted, goes without saying. 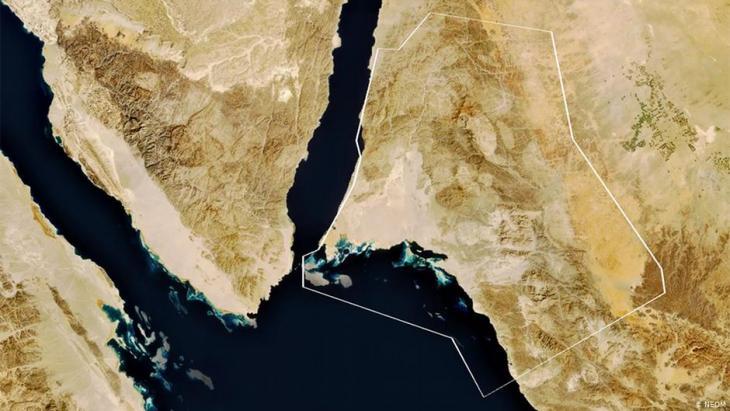 Neom, the city planned for Saudi Arabia's northwest: designed as a megacity, the project is to cover an area the size of Belgium (see map above). It envisions an ultra-modern high-tech urban habitat and a green city powered by renewable energy and green hydrogen. The project's official website advertises that Neom will accelerate the "progress of humanity"

It is claimed that Neom’s energy needs will be met exclusively by wind and solar power. As the Crown Prince announced last week, this makes Neom a "civilisational revolution" that puts "people at the heart of urban planning". Finally. Last year MbS was already saying: "After the industrial revolution, cities prioritised machines, cars and factories over people." What arose, and here His Royal Highness is absolutely right, were environmentally destructive concrete jungles hostile to life. In Neom on the other hand, everything will be different.

The "infrastructure footprint" (subterranean) is to be limited to an absolute minimum, there’ll be no individual motorised transport; also underground, there’ll be a high-speed train running from one end to the other. In just 20 minutes, apparently.

But actually, a transport system should be superfluous: parks, cultural venues, educational establishments, sports and leisure spaces, workplaces ... for residents of Neom / The Line – all that is supposed to be reachable "in five minutes" on foot. Just like in a medieval city. Well, almost. But nevertheless, the futurism is palpable; that’s why services are "100 percent automated", in other words, carried out by AI.

Under a single roof. The Line can be imagined as a 170-kilometre tall skyscraper that, possibly rather exhausted by its own ambition, decided to take a nap. MbS, according to MbS, is tackling "the challenges facing humanity in urban life today".

Urban planning utopias are booming – partly thanks to Putin

The aim is to "shine a light on alternative ways to live". All planned by a one-stop shop and soon to become reality. We can all stop worrying. All kinds of ideas for eco-super-cities have been doing the rounds for years. And although there’s nowhere to realise these ideas so easily (and so inhumanely) as in autocracies: they’re still just ideas. When the past has served you so well for so long, for example with energy sources such as oil, you’ll grasp futurism as you would a lifejacket.

In this respect it’s also no wonder that the current plans are now being passed around so excitedly: Putin is tightening the gas tap like a vice, trapping the inhabitants of the fossil age. At every turn, the call for alternative ways of life and self-sufficient cities grows louder.

Doubtless bolder action could have been taken sooner to reconfigure cities in response to climate change – in Europe and elsewhere. Cities are genuine climate killers. And perhaps this is the genuine lesson to be learned from the impressive, visionary and above all intriguing futurisms that are being conceived in the desert sands far from our worn-out cities: If we don’t square up to the future, others will.

The autocrats, enthusiastic because they recognise the potential for a new business model (and of course, because their acts of graciousness will save the world), have been ready and waiting for some time.  A 170-kilometre long, 200-metre wide and 500-metre high spatial continuum raised – or rather elongated – from nothing, which presumably will be made from reinforced concrete and not mud and jute, is definitely not the future. It’s a nice utopia.

What would be even more utopian is if we were to stop idealising the millennia-old invention of the city and finally begin modifying it in a way that does justice to people and the environment. For real.

How is one to convey the history of Islamic images of Muhammad freed from today’s polarised politics? What are the challenges and pinch points of this particular academic ... END_OF_DOCUMENT_TOKEN_TO_BE_REPLACED

The devaluation of the Egyptian pound combined with rising food prices is taking its toll on Egypt. More and more people are slipping into poverty. Karim El-Gawhary reports from ... END_OF_DOCUMENT_TOKEN_TO_BE_REPLACED

Chinese President Xi Jinping's visit to Saudi Arabia in December 2022 may have rattled Washington, but it simply highlighted the Arabs’ desire to diversify their foreign relations ... END_OF_DOCUMENT_TOKEN_TO_BE_REPLACED

Lebanon was long viewed as the Switzerland of the Middle East. Until relatively recently, billions were deposited in its banks. Gulf states were among the foremost investors in ... END_OF_DOCUMENT_TOKEN_TO_BE_REPLACED

Protests by Western activists at the FIFA World Cup may have backfired and sparked a backlash against gay, lesbian and queer communities in Qatar, critics say. By Cathrin Schaer END_OF_DOCUMENT_TOKEN_TO_BE_REPLACED

According to a recent survey, half of all Iranians say that they have left Islam as a religion, while two-thirds believe Islamic law should be excluded from their legal system. In ... END_OF_DOCUMENT_TOKEN_TO_BE_REPLACED
Author:
Gerhard Matzig
Date:
Mail:
Send via mail

END_OF_DOCUMENT_TOKEN_TO_BE_REPLACED
Social media
and networks
Subscribe to our
newsletter