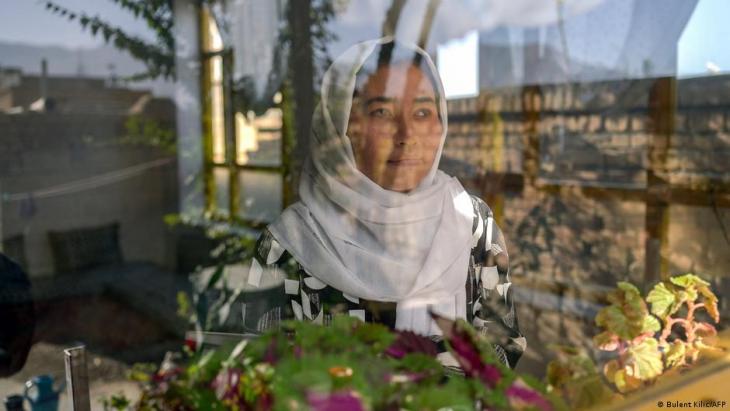 "The Lionesses of Afghanistan"
No more 'white saviours', please

Journalist Waslat Hasrat-Nazimi was forced to flee Afghanistan with her family as a child and grew up in Germany. To mark the publication of her book "The Lionesses of Afghanistan", she spoke to Qantara.de about growing up between two cultures, her focus on Afghan women and the media's distorted view of the country. Interview by Schayan Riaz

Ms Hasrat-Nazimi, you say at the beginning of your book that you didn't choose to write it. On the contrary, it chose you. What do you mean by that?

Hasrat-Nazimi: From an early age I wanted nothing more than to fit in. But German society has always given me the feeling that I don't belong. That I am not a native German. It's something that has been with me my entire life, and part of it is that people see me as an expert on my country of origin, on the country of my parents. I'm sure many children from migrant families can relate.

After 11 September 2001, when people were finally able to associate something with Afghanistan, I was frequently expected to comment on what was happening in Afghanistan, what was going on with Islam, and why the women there look the way they do. At some point, I decided that I had to face this head on; that it was not enough just to adopt the views of my parents.

So I went and learnt a lot, about the history of the country, about marginalised people in Afghanistan, and I'm still learning. I began studying the political issues affecting Afghanistan and decided to make that my journalistic focus. I have been covering and reporting from Afghanistan now for over a decade.

A few weeks after the Taliban seized power in August 2021, the publishing house Rowohlt approached me and asked if I would like to write a book on Afghanistan. Even though it didn't fit my schedule at all, I felt it would be a good opportunity to have my say. 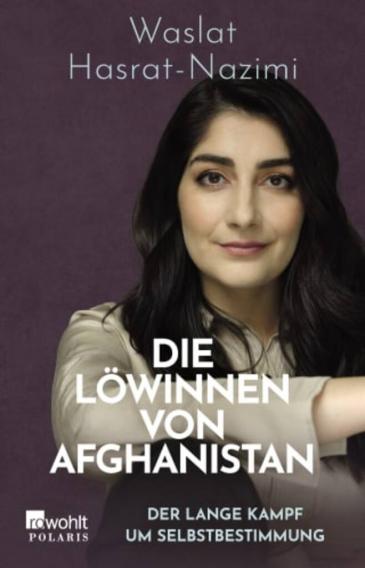 Waslat Hasrat-Nazimi conducted numerous interviews with Afghan women in Germany and Afghanistan for her book. Together with her own family history, she gives an insight into the struggle of Afghan women against systematic oppression. She tells of their hopes and fears, of courage, despair and strength

Growing up between two cultures

You write about growing up between two cultures. Has writing this book helped you come to terms with your identity issues?

Hasrat-Nazimi: The book has definitely helped me to see the bigger picture. I was able to look back at everything in my life: in a way writing the book was therapy.

I struggled to find my identity for a very long time. Was I Afghan or German? Yet even before I started writing, I had decided to see myself as Afghan.

The book enabled me to come to terms with all these aspects. What was much harder to deal with, however, was the Taliban's takeover of power a year ago, which I found very traumatic. It echoed my own trauma, forcing me once again to confront my own flight from Afghanistan.

You call the Afghan women "lionesses". What do you mean by that?

Hasrat-Nazimi: I had major reservations about the title at first. It seemed too romantic. Was this just another attempt to exoticise women? In the first chapter, however, I explain what the term means, what it means to the collective consciousness of Afghans when they call themselves "lions" and what the symbolism is behind it.

Former Afghan president Hamid Karzai once said in a speech that we are indeed "lions". "We lions can do anything": statements like that touch a nerve with many people in Afghanistan. At the same time, however, such phrases always take the masculine form. Women get called "sher", although the correct term is actually "sher zan". In the German, I wanted to redress the balance with "Loewinnen" (lionesses), to make the book exclusively about women.

What surprised you most when writing about the "lionesses" of Afghanistan?

Hasrat-Nazimi: For a start, the research was harder than you might think, because there are so many different women, women of different ethnicities, religions, social backgrounds and with different lifestyles. I also wanted to portray women with whom I disagreed.

What surprised me was the misogyny among women. I didn't anticipate the scale. For example, I once asked a woman if she had children. She said she didn't, because all her sons had died and she didn't count her daughters. For her, girls didn't count at all. Such misogynistic attitudes run through the entire country. Often women aren't even seen as people.

Girls' education – controversial under the Taliban

It surprises me that even though the Taliban have regained power, some women are still able to work without any restrictions. How is that possible?

Hasrat-Nazimi: There are regions and cities where women can still go to work and attend school. Private schools also exist for girls after grade 6. Whether girls are allowed to go to school or not depends on which Taliban faction is in power locally. This shows the wide-ranging differences among the Taliban themselves. By the time I finished my manuscript, it was already foreseeable that the Taliban would prove incapable of pursuing a common line. Since then it has become obvious that there are considerable internal power struggles. 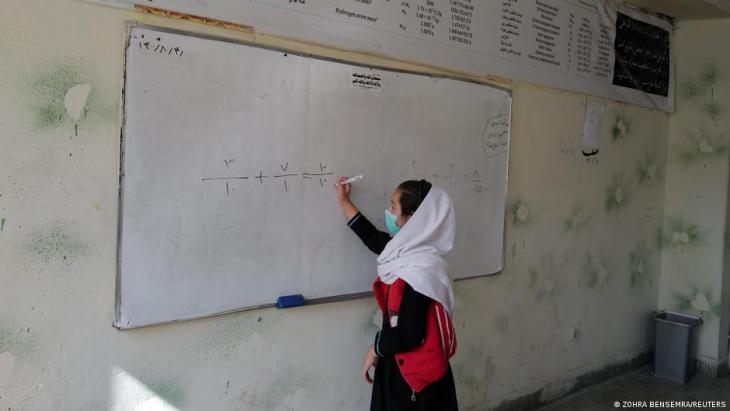 I expect the infighting to increase. The Taliban are not united on the issue of schooling for girls after grade 6. Some Taliban think education after grade 6 is good, others are against it. In principle, scholars in Afghan society are in favour of girls' education, but the Taliban disagree among themselves. However, girls' education is not the only issue on which the Taliban cannot agree. If this continues, something is bound to give at some point.

You are head of the Afghanistan desk at Deutsche Welle. A number of your colleagues also had to be evacuated from Afghanistan last year after the Taliban took power. How are they doing today?

Hasrat-Nazimi: The families and former correspondents have now settled in Germany. Their children can speak the language, with some even coming top of their class, which is fantastic. But of course, it is not easy. As correspondents, they had a completely different working environment. Here at the Deutsche Welle headquarters, they sit at their desks from 9 a.m. to 5 p.m.; in Afghanistan, they were constantly on the road. That has been a difficult adjustment to make. For many of them, the loss of status is also not easy to cope with.

You write specifically about the way the German media report on Afghanistan, who has the sovereignty of interpretation and that only a few Afghan voices are heard. Has this improved since the Taliban regained power last year?

Hasrat-Nazimi: The way Afghanistan is reported in the media is still degrading. Politicians say something, and the media picks up on it; the one determines the other. Of course, it is easier not to think about who is responsible. But the fact remains that Germany and the West are partly to blame for the fact that the Taliban are back in power today. Still, everyone now seems resigned to the status quo. 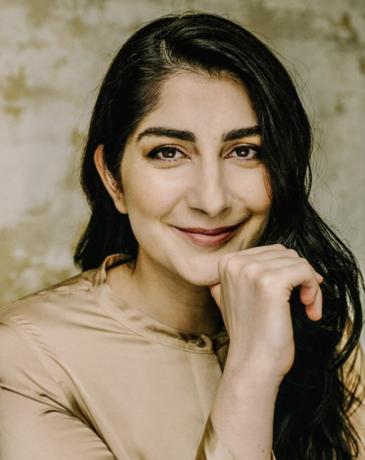 The people of Afghanistan are being used as pawns. The West, for example, views the Taliban in terms of what is politically expedient at any given moment. "I wonder whether people even realise that human lives are at stake," asks Waslat Hasrat-Nazimi. "The majority of the population is starving, 95 percent of Afghans don't have enough to eat. Yet that seems to leave us cold here in Germany." Those interested in the fate of Afghanistan should first examine their own cliches about the country, she says

After 2001, when the Bonn Process began, the Afghans demanded that the Taliban also be included in the negotiations. George Bush refused at the time on the grounds that he would not talk to terrorists. Oddly enough, it is precisely these terrorists who are now in power in Kabul. This is neo-colonialism: one day the Taliban are evil and you have to fight them, and the next they are not.

How the Taliban are to be judged is decided from the outside. Ultimately, however, it is the people on the ground who suffer as a result. They are being used as pawns. I wonder whether people even realise that human lives are at stake. The majority of the population is starving, 95 percent of Afghans don't have enough to eat. Yet that seems to leave us cold here in Germany.

So what can people do specifically to help Afghanistan?

Hasrat-Nazimi: First of all, inform yourself. Question your own narrative, the cliches in your head and your own racism. What image of these people do I have in my head and why do I care so little about what happens to them?

Anyone calling themselves a feminist should be outraged by what is happening in Afghanistan. Because what is happening there could also happen here. I'm not at all a fan of the term "Talibanisation" because it distorts reality, but Afghanistan has shown us how quickly women's rights can be rolled back.

That's why I can't understand why people pretend Afghanistan is so far away. Let's not fool ourselves, the country will once again become a haven for terrorists and then we in Europe will scratch our heads and ask how it could have come to this.

We have to support Afghanistan now and meet the people on an equal footing. And can we please do away with the white saviour complex? Unfortunately, that’s something I see very often among white people. Don't expect to be thanked for helping. Helping is simply the most humane thing you can do.

Waslat Hasrat-Nazimi is head of the Afghanistan desk at Deutsche Welle. She is the author of "Die Loewinnen von Afghanistan", published in German by Rowohlt (2022).

Home
Print
Newsletter
More on this topic
Afghanistan under the Taliban: Back to the pastTaliban Afghanistan: Afghan girls attend "secret school"The West's failure in Afghanistan: In denial to the bitter end
Related Topics
'Islamic State' | IS, 9/11, Al-Qaida, Integration in Germany, Media dialogue, Muslim women, Refugees, Sexism and violence against women, Taliban, Women in the Islamic world
All Topics

Cries of "Benghazi!" still resonate across the USA ten years after a deadly terrorist attack in Libya killed the U.S. ambassador and three other Americans. Ethan Chorin re-tells ... END_OF_DOCUMENT_TOKEN_TO_BE_REPLACED

Sufism has fluid boundaries. Just like Islam, Sufism is inconceivable without its late antique roots. Then again, it has also exerted an influence on Hinduism. Moreover, the Sufic ... END_OF_DOCUMENT_TOKEN_TO_BE_REPLACED

Just as the Islamic Revolution fundamentally changed Iran 43 years ago and had an impact far beyond the country's borders, the current wave of protests sweeping the country is set ... END_OF_DOCUMENT_TOKEN_TO_BE_REPLACED

One year ago the Taliban returned to power, seizing Kabul; the U.S. and its allies made a panicked exit from the country. Of all the books written on the subject, four stand out ... END_OF_DOCUMENT_TOKEN_TO_BE_REPLACED

Jonas Poher Rasmussen's Oscar-nominated animated documentary “Flee” focuses on the life of a refugee from Afghanistan. Based on a true story, it centres around the question: when ... END_OF_DOCUMENT_TOKEN_TO_BE_REPLACED

The Biden administration could have used Pakistan’s economic crisis to compel the country to sever its longstanding ties to terrorist groups. Instead, the U.S. protects and ... END_OF_DOCUMENT_TOKEN_TO_BE_REPLACED
Author:
Schayan Riaz
Date:
Mail:
Send via mail

END_OF_DOCUMENT_TOKEN_TO_BE_REPLACED
Social media
and networks
Subscribe to our
newsletter