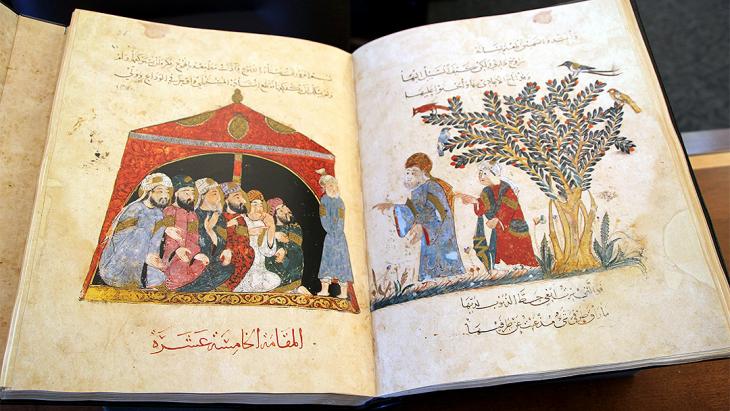 The "maqama", a classical Arabic form of prose-poetry, is still almost unknown in Germany – as is the name of the 11th-century Baghdad poet Ibn Naqiya. A new translation has the potential to change all that. By Gerrit Wustmann

11th-century Baghdad: a prosperous metropolis, and a place where theologians, philosophers, merchants and artists congregated. In their midst was the wealthy merchant Ibn Naqiya (1020 - 1092), whose life we know very little about. What we do know is that he was also a poet. Some of his work has survived – and at its centre are the "Ten Transformations", the maqamas about the subversive rogue Al-Yashkuri. A crafty bon vivant, Al-Yashkuri’s greatest pleasure lies in exposing all the imposters and hypocrites of his age and purloining the masks of opportunists whose piety is all a pretence – often by drawing on the Koran.

The Islamic studies scholar Stefan Wild, who is based in Bonn, has unearthed and translated this treasure into German. Entitled "Moscheen, Wein und boese Geister" (Mosques, wine and evil spirits), it is now available as part of the publisher C.H. Beck’s Neue Orientalische Bibliothek series.

The maqama, a piece of rhyming picaresque prose, is a classical Arabic literary form, attributed to Al-Hamadhani (968 – 1007), and made famous in Germany by Friedrich Ruckert. "At its heart," writes Stefan Wild in his detailed introduction, "there is most often a cunning, eloquent, roguish hero, who might just as easily be described as an anti-hero."

Disguised as an itinerant beggar, preacher or scholar

With the help of his polished wit, his deviousness and his constant transformations, he makes his way in an inhospitable world. He roams the country disguised as a beggar or a preacher, a pious visitor to mosques, a scholar or a prophet.

Each maqama, however, is told from the perspective of one of Al-Yashkuri’s "victims", someone the rogue encounters in one of his many disguises; it is only when his rhetoric has won an argument or he has snared the object of his desire that he is recognised as Al-Yashkuri. 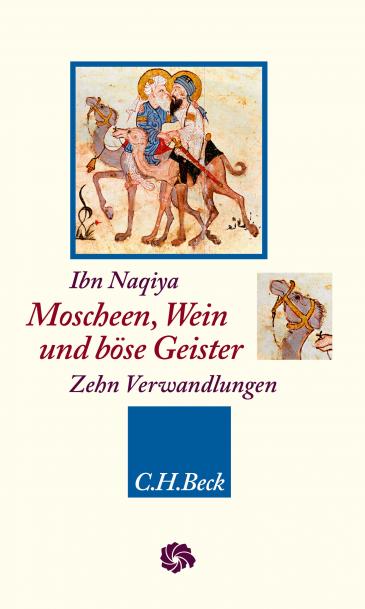 If you can’t imagine that reading a nine-hundred-year-old poet could be a great pleasure, your mind will certainly be changed by these "Ten Transformations". These verses are a gem, not merely for literary and Islamic-studies scholars, but for all contemporary readers

While, as a rule, the literature of the time presents a fictional, exaggerated pseudo-reality, oriented towards religious and moral principles and praising both rulers and priests, maqamas turn the tables; like the German niedere Minne, which focussed on the lower classes, they are interested in representing the world and the people in it as they are. And this frequently means throwing all religious and moral imperatives out of the window, or exposing them as false.

It goes without saying that these efforts were not universally applauded. According to Stefan Wild, in the margin of the original manuscript one scribbled remark from an anonymous author reads: "The writer has mentioned nothing that might be regarded as philology or genteel education. He thus reveals only the absence of true education." This was probably far from being the only piece of hostile criticism that Ibn Naqiya received, even during his lifetime.

The tricks and escapades, the cunning and stories of Al-Yashkuri are in fact surprisingly modern, thanks not least to Stefan Wild’s translation. Wild has said himself that his style is oriented towards Rueckert and Robert Gernhardt. And when Al-Yashkuri appears in the "poet maqama" as a dreadful, doggerel-writing would-be poet, blowing open a sophisticated society, you can’t help but be reminded of Axel Kutsch's work. In this maqama:

(Then he continued, coming out with doggerel / and stumbling through the measures. / The long poem’s metre was bungled, / the rhymes a torturous embarrassment to the ears.)

In the "Baghdad maqama", he passes himself off as a blind beggar to another sophisticated society, pleading for entry and alms by citing verses from the Koran, and finally succeeding. By the time those he has fooled realise that Al-Yashkuri is by no means blind or poor, it’s much too late: his belly and his pockets are already full.

(Then I cried: "You cursed liar! / You tried to make us believe / that God had taken your eyesight. / But you came here in the best of health. / There is nothing wrong with you, / or with your vision!" / At that he laughed and swiftly said: / "Be content that I am blind only in my heart / and that my backside never finds a resting place.")

Insights into the time of Ibn Naqiya

Whether it’s the enjoyment of wine and the ban on drinking it, or miserliness and greed, or art, power, religion, pederasty or music, there is no subject from which Ibn Naqiya shies away. It is fair to assume that in some of today’s religious fundamentalist circles, these texts would be rejected with no less vehemence than they were in their author’s day (something else that testifies to their continuing relevance). And so these thematically wide-ranging, highly artistic and, not least, incredibly funny prose poems afford us insight into Ibn Naqiya’s time, the society and the conditions in which he lived, in a way that many other verses or drawings from 11th-century Baghdad are scarcely able to.

If you can’t imagine that reading a nine-hundred-year-old poet could be a great pleasure, your mind will certainly be changed by these "Ten Transformations". These verses are a gem, not merely for literary and Islamic-studies scholars, but for all contemporary readers. And this discovery suggests that the treasure trove of classical Arabic poetry may well contain much else to be found and translated for us.

Home
Print
Newsletter
More on this topic
Book review: Stefan Weidner's ʺ1001 Books. The Literatures of the Orientʺ: The Middle East – a rich vein of world literatureThe Book of Exposition: An archaeology of eroticaArabic-to-English literary translation: Raising the profile
Related Topics
Arabic literature, Book reviews, History of Islam, History of the Near and Middle East, Literature, Middle Eastern studies
All Topics

The clashes in Baghdad between supporters of Muqtada al-Sadr and pro-Iranian militias show that an intra-Shia power struggle is in full swing. An analysis from Cairo by Karim El- ... END_OF_DOCUMENT_TOKEN_TO_BE_REPLACED

Bachtyar Ali sends the hero of his latest novel – "Mein Onkel den der Wind mitnahm" – literally flying. Jamshid is so thin after his years as a political prisoner that a gust of ... END_OF_DOCUMENT_TOKEN_TO_BE_REPLACED

In this essay, renowned Lebanese journalist and writer Hazem Saghieh asks whether the Arab Levant, which stretches from Iraq in the east to Egypt in the west, will remain an ... END_OF_DOCUMENT_TOKEN_TO_BE_REPLACED

Climate change is taking its toll on communities in Iraq. Younes Ajil turns on the tap in his home but nothing comes out. Villages in the south of the drought-hit country are ... END_OF_DOCUMENT_TOKEN_TO_BE_REPLACED

END_OF_DOCUMENT_TOKEN_TO_BE_REPLACED
Social media
and networks
Subscribe to our
newsletter