Scarcely any other band in the Muslim world can boast a musical culture so deeply imbued with tradition, as can the Moroccan "Master Musicians of Joujouka." But the original character of this once living ritual music is endangered, writes Arian Fariborz 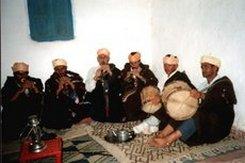 ​​Joujouka is a small insignificant village of 500 people on the edge of the Rif Mountains in northern Morocco: its whitewashed houses have blue painted doors and window frames. A stony path lined with luxuriantly overgrown cactuses and sheer rock leads over a hill to the village mosque and the school.

But this isn't an ordinary village. Joujouka is the home of a musical elite whose ancestors came from Persia in the ninth and tenth centuries and who are still renowned for the magic and healing effects of the sounds they make.

The Legend of Sidi Ahmed Sheikh

There are many myths and legends which surround the inhabitants of the village. Many of them are about Sidi Ahmed Sheikh, a saint who founded the village in the thirteenth century and brought Islam to Joujouka. Not only that: Sidi Ahmed Sheikh was a great philosopher and a talented poet. It was he who discovered the music, both for his poetry and for his village.

In the seventeenth century the ritual musicians of Joujouka served in the court of the sultans of the Alawi dynasty. They lived in the palaces of the Muslim rulers, played on festive occasions and performed regularly on Fridays before the sultans went to the mosque to pray.

The art of these Master Musicians is linked both to Sufi mysticism and to paganism. They play on Tebel and Tariyya (drums), Ghaita (woodwind instrument), Lira (flute) and Gimbri (stringed instrument). Over a ritual sequence of several hours, the music develops a hypnotic attraction which puts musicians and public alike into a trance-like state. Villagers and outsiders both claim that the music has magical and healing properties.

The healing effect of the music became known in the surrounding villages: the crippled, the mentally ill, the sterile—they all made the pilgrimage to Joujouka. They hoped that the mystical sounds and the "Baraka" of Sidi Ahmed Sheikh would bring them a rapid recovery.

But it's not just the spiritual and healing sounds which are typical of Joujouka's music. The Master Musicians are also deeply involved in heathen, rural customs and dance spectacles.

A key figure here is the goat-god Boujeloud—also known as the Father of Fear. Boujeloud is in fact none other than the antique goat-god Pan, who acts as a kind of source of fertility for the villagers. Women are said to become pregnant when Boujeloud touches them with his stick as he dances.

Once a year, at the end of the Muslim fasting month of Ramadan, a celebratory fire is lit on the village square in honour of Boujeloud. The Master Musicians of Joujouka begin to play and everyone waits excitedly for the arrival of the goat-god.

And suddenly he's there: a terrifying creature covered in fresh goatskin, wearing a straw hat and with his face painted black. Boujeloud carries two olivewood sticks in his hands, swings them through the air as he begins to sway in time to the music.

Encounter with the Beat Generation

The music of the Master Musicians of Joujouka has influenced many western musicians, especially Americans, in past decades. The list of those who have come to Joujouka in search of musical and spiritual inspiration is a who's who of students of pop culture, writers and wanderers between the worlds: from the Tangier-based Beat poets Brion Gysin, William S. Burroughs and Paul Bowles, to the Rolling Stones guitarist Brian Jones and the free jazz pioneer Ornette Coleman.

In the forties it was the then mentor of the Master Musicians, the famous Moroccan painter Mohammed Hamri, who was the key figure in bringing the west and Joujouka together. He was the only Moroccan artist who could deal with Burroughs and Gysin as an equal.

From his childhood onwards, Hamri had spent much time in the village in which his mother was born. The magic of the music seized the boy, who worked for the whole of his life to support the musicians and the villagers of Joujouka.

During the famines which raged in Joujouka and the surrounding villages in the Rif mountains during the forties, it was Hamri's suggestion to make the fascinating music of the region available to a wider public, to play in public places in larger towns and to earn money to put an end to the poverty in the village.

Shortly afterwards Hamri met Paul Bowles and Brion Gysin in Tangier. They recognised and promoted his extraordinary talent as a painter. In 1950, he took them both for the first time to Joujouka where they experienced the Master Musicians. Brion Gysin was overwhelmed by them; he said it was the music he wanted to hear for the rest of his life. As Hamri had done earlier, Gysin took on the role of mentor to the musicians.

Now he too did whatever he could to promote the musicians and to help fight the effects of famine in the village. As part of his efforts, in 1952 he and Hamri opened a restaurant in the Tangier Kasbah called 1001 Nights.

The music journalist Joe Ambrose reports that Hamri was responsible for the kitchen and the gastronomy while Gysin was responsible for attracting high-class custom: Bohemians, embassy staff, diplomats—he made sure the ambience was right. Small groups of musicians from Joujouka rotated six at a time. They came for a week, went back with their money and sent the next group. The women of Joujouka worked in the kitchen and did the cleaning.

As well as prominent local figures and members of the demi-monde, the guests of 1001 Nights included members of the western sub-culture like Timothy Leary or the Beat writer William Burroughs, who so admired the Master Musicians that he once described them as a 4,000-year-old rock band.

The visit of Brian Jones to the Master Musicians in the sixties marks the start of a series of pilgrimages by western musicians to Joujouka which is still continuing. The Master Musicians put on a special musical spectacle for Jones in 1968 and the recordings became the album "Brian Jones meets the Pipes of Pan at Joujouka," which was one of the first world music albums.

The free jazz pioneer Ornette Coleman followed in January 1973. He was attracted to Morocco by the reports of the music journalist Robert Palmer, who'd already visited Joujouka. While Brian Jones just recorded the music of the Master Musicians, Coleman wanted to join them in performance. But the combination of the two musical worlds turned out to be more difficult than expected.

The ritually fixed musical structures of the Master Musicians couldn't easily be mixed with Coleman's individualistic improvisation. But eventually, it's said, Coleman developed a music which was fair to both sides. The music remained unpublished—shortly before his Joujouka album was ready, Coleman was fired by his record company.

But his experience in Joujouka had a long-term influence on Ornette Coleman's music. Based on what he'd heard there he developed the sound of his guitar ensemble Prime Time, which remained typical for him for many years. And the trip to Morocco also left a deep spiritual impression on Coleman.

The transcendental powers of the ritual music were proof for him of the existence of magic. Previously he had only believed magic was possible, now he knew. And after his visit to Joujouka, Ornette Coleman found himself finally able to free himself from the restrictions of western musical culture.

Meanwhile, over the last twenty years, the situation of the Master Musicians of Joujouka has changed dramatically. Economic pressures have made a life dedicated to music no longer feasible. Traditional ways of life are eroding in Joujouka as elsewhere. Many musicians leave the village, looking for a more modern world and for better ways of making money.

But it's not just social change which has had an influence: the death in 1982 of the former leader of the Musicians, Hadj Abdessalam Attar, was a decisive influence on the change in their traditional performance culture. On his death, his son, Bachir Attar, claimed the leadership of the group.

According to the music journalist Joe Ambrose, Bachir Attar went to the Master Musicians in the village and said that, as his father had been their leader, this was now his privilege. They should start to introduce electronic instruments into the music, to make it more commercial.

"He was very young at the time," says Ambrose. "I think he was in his early twenties. The other musicians, many of whom had played on the Brian Jones album and had been with the group since then, simply laughed at him and said: 'You can perhaps become leader when the time is right, but you're not that far yet. You don't get the leadership just because your father was leader. And anyway this stuff with the modern instruments is simply rubbish.'"

Nevertheless Bachir Attar retained his ambition to link his name with that of the music of Joujouka and to bring it out into the world. He cooperated with top ranking western pop stars, but he made such big concessions that little was left of the original form of the music of the Master Musicians.

And, unlike Hamri, Bachir Attar never did anything for the good of the village and its inhabitants with the considerable income he gained from the commercial marketing of the Joujouka brand. He began to recruit people who had nothing to do with Joujouka – commercial musicians from the nearby town of Ksar El-Kebir or Tangier.

"The Music of Joujouka featuring Bachir Attar", recorded a few years ago together with the Indian DJ Talvin Singh is Attar's latest album. It lacks any trace of the fascinating musical content of the traditional Master Musicians.

Attar has also cooperated with the funk saxophonist Maceo Parker and with the Rolling Stones in world music crossover projects which have little to do with the musical culture of Joujouka.

But not all the musicians of Joujouka are happy with the way in which Bachir Attar has been exploiting the religious and ritual music of their village for commercial purposes. Many of them do not want to follow the self-appointed leader of the Master Musicians on his way through the international music business.

Attar's opponents make up a group which still feels itself bound up with the spirit with which Hamri made the Master Musicians famous. They play the music in a way which certainly sounds different from the sound of twenty years ago, but which doesn't compromise with the stars of the music scene or with commercial producers.

Today there are two factions, both performing as the Master Musicians, but neither wanting to have anything to do with the other. The continuous tension between the two camps is not good for the life of the village, especially since the division often runs between brothers and cousins.

The split of the Master Musicians of Joujouka is a tragic development. It's an example of what can happen when music from a developing country gets pulled into the influence of the music industry.

All the same, Joujouka still maintains a highly organised musical culture, which remains unique in many ways. It's a music which has repeatedly attracted artistic visionaries and wanderers between the cultures, looking to find experiment and liberation within its ancient magical powers.

END_OF_DOCUMENT_TOKEN_TO_BE_REPLACED
Social media
and networks
Subscribe to our
newsletter