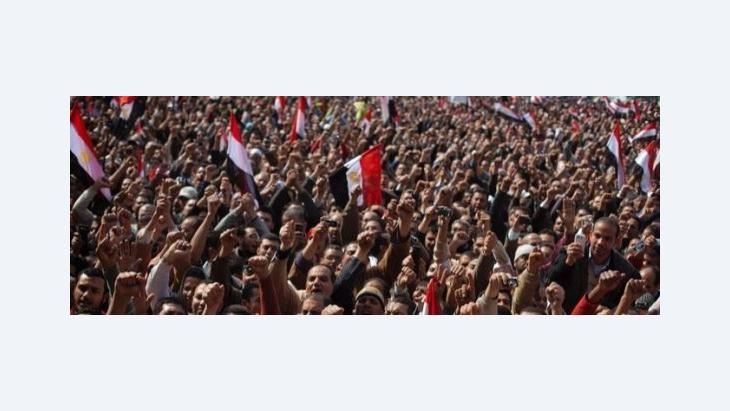 The Merit Publishing House in Cairo

A Mecca for Intellectuals, a Centre of the Revolution

﻿The Merit publishing house was only founded in 1998, but quickly assumed a key role in the country's political opinion making. Samir Grees visited the Merit offices and spoke to founder Muhammad Hashim

There's nothing special about building no. 6, Kasr el Nil Street. It's a normal, dilapidated house clearly bearing the scars of time, just like most of the houses in this street. In the heart of Cairo, it's a district that in the early 20th century used to be an elegant neighbourhood with a European flavour. The world-famous Tahrir Square is just a few steps away.

A small sign in the entrance bears the name of the publishing house based on the first floor. It's difficult to believe that this small, unassuming apartment is the headquarters of the "Merit" publishing house, the foundation of which triggered a small earthquake on the Egyptian book market in 1998. Many now-famous names published their debut work through Merit – bestselling author Alaa al-Aswani, for example, successful writer Miral al-Tahawi and the novelist Hamdy Abou Juleil. Merit focused on young, sophisticated literature right from the outset, and quickly became a good outlet for this kind of genre.

Achieve something, or commit suicide 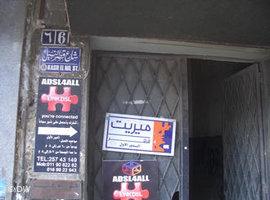 Don't judge a book by its cover. Neither a publishing house: Entrance to Merit, one of Egypt's most influential publishers

​​The motor behind the publishing house is founder and director Muhammad Hashim. He looks almost like a small, meagre civil servant – thin, as though he's suffering from anaemia. Chaotic, restless, hyperactive. Many writers complain about him bitterly, calling him unreliable, accusing him of making promises that he doesn't keep. But as soon as they have a new manuscript in their hands, they run to him and want him to publish it more than anything else.

Muhammad Hashim is a revolutionary and political publisher through and through. His publishing house is the scene of debates more heated than any taking place in the offices of Egyptian political parties. He is a die-hard opposition figure, against the government, the president and the corruption that blights the nation. A vehement advocate of civil society and secularism in Egypt.

"When I founded the publishing house in 1998," says Muhammad Hashim, "I decided that either I achieve something, or I commit suicide." Previously, in the 1970s under Sadat, Hashim was politically active and was persecuted and detained "for Communism, an attempt to topple the regime and insulting the president," he says. Following his release, he worked in various professions in Egypt and Jordan before beginning a 12-year stint at the "Masr al-Mahrussa" publishing house. Then he decided to found his own. He named it after the beautiful Pharaoh's daughter princess Merit.

From "Kifayya" through to the "January 25th Revolution" 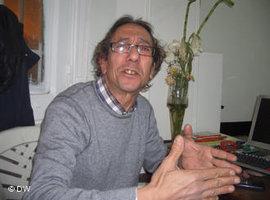 Many writers complain about him bitterly – but as soon as they have a new manuscript in their hands, they run to him: Muhammad Hashim, founder of Merit Books

​​"The first time we demonstrated against Mubarak it was 4 December 2004," Hashim recalls the birth of the movement "Kifayya" (Enough!), which spoke out then against the re-election of Mubarak. Some 300 people gathered on that day, among them famous writers, artists and activists such as Bahaa Taher and Alaa al-Aswani, to tell Mubarak that enough was enough. "This was the first time ever that Egyptians were shouting 'down with Hosni Mubarak'," says Hashim, thinking back.

The Kifayya movement spawned another called "writers and artists for change", which later lobbied Mohammed el-Baradei, the former head of the UN's nuclear watchdog in Vienna, when he returned to Egypt in early 2010. "Since Kifayya," says Hashim not without a touch of pride, "we resisted Mubarak's regime, which tried through its minister for culture Farouk Husni to tame intellectuals with well-paid positions and prizes for literature and art. Kifayya broke through the wall of fear, then the wall imploded entirely."

A Kaaba for intellectuals in the heart of Cairo

Without all these movements, says the publisher, without the broad-based workers' protests in the Nile Delta and the April 6 Youth Movement of 2008, the January 25th revolution would never have been possible. Since the very first day, the Merit publishing house has been something akin to a supreme command centre for the revolution, as some writers say with a grin. "There were many contributing factors, but my individual persona didn't play a role," says Hashim modestly. 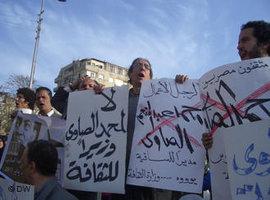 The office's proximity to Tahrir Square is certainly a key factor. Another is that over the past few years, the publishing house has been an important gathering place for many writers and artists from all manner of disciplines. During the revolution, the office resembled a political activism camp: young and old demonstrators came and went, some ate, many came to seek refuge from the batons of the police and squads of thugs loyal to the government, others spent the night in the small office because it was late and they could no longer get home.

It was around this time that Merit also became an address for donations for the revolutionaries occupying Tahrir Square: Hashim received blankets, money, food and drinks every day, from a wide variety of people. "Apart from businesspeople and writers, we also received donations from a Jesuit monk, and an ex police general whose only request was that I didn't mention his name," Hashim recalls.

The resignation of Mubarak on 11 February 2011 has not signalled an end to Merit's political role. The office is still overrun with activists, intellectuals and political scientists who conduct lively discussions on the future of Egypt. When he's not joining in with the heated debates, Hashim signs the odd new contract with a writer, answers the telephone and prepares the next political campaign.

Samir Grees studied German in Cairo and translation in Mainz, Germany. He works as a freelance journalist and translator. He has translated many works of German literature into Arabic, including "A Loving Man" by Martin Walser, "The Piano Teacher" by Elfriede Jelinek and "Simple Storys" by Ingo Schulze.

Social media make many things possible – including the unwanted circulation of intimate private photos. This has given rise to new forms of crime and sexual blackmail. An ... END_OF_DOCUMENT_TOKEN_TO_BE_REPLACED

The change in U.S. president is also having an impact on the conflict between Turkey and Greece. Since the USA has started to play the Greek card, the strategic situation in the ... END_OF_DOCUMENT_TOKEN_TO_BE_REPLACED

Arab women played a leading role in the protest movement of 2011. Since then, ongoing social transformation has had a considerable impact on their lives. What is their assessment ... END_OF_DOCUMENT_TOKEN_TO_BE_REPLACED

They’ve already got the Louvre; they’ll soon have a Guggenheim Museum as well – and now the Emirates have added literature to their quest for cultural supremacy in the Arab world ... END_OF_DOCUMENT_TOKEN_TO_BE_REPLACED

Years in the making, Sisi's elite New Administrative Capital will isolate most Egyptians from their centres of government in an effort to fortify the regime against any social ... END_OF_DOCUMENT_TOKEN_TO_BE_REPLACED

Professor Timothy Brennan's "Places of Mind: A Life of Edward Said" is a detailed biography of one of the most important intellectuals of the twentieth century, taking us on a ... END_OF_DOCUMENT_TOKEN_TO_BE_REPLACED
Author:
Samir Grees
Date:
Mail:
Send via mail

END_OF_DOCUMENT_TOKEN_TO_BE_REPLACED
Social media
and networks
Subscribe to our
newsletter