In a jointly written history textbook, Israelis and Palestinians attempt to understand 60 years of hostility. Arnfrid Schenk reports on a unique project of reconciliation

​​Sami Adwan has a story to tell that has a surprising twist. It is his own story. The short version goes like this:

Born in 1954 in a village near Hebron on the West Bank, he spends his childhood under Israeli occupation. He works hard and makes it into the university in Jordan. For a long time he thinks of the Israelis the same way everyone in Palestine thinks of them: "They are the reason for all my misery, for all my suffering." Adwan is still thinking this way when he goes to the USA to study education – he avoids lectures and seminars where he knows he will encounter Jewish students.

At that point, he has never spoken to an Israeli; he doesn't know them at all as civilians, but only as soldiers at the checkpoints. He doesn't want to know them.

A few years later, Adwan is co-director of an Israeli-Palestinian peace research institute and is working together with Jewish teachers and historians on writing an Israeli-Palestinian history book on the Middle East conflict. He is one of the people we like to call a bridge-builder. But how did he get there?

Unexpected helpfulness of an Israeli

Sami Adwan, professor of education at the University of Bethlehem, continues recounting his story, talking fast now. It is a late spring evening in Braunschweig, Germany, and he has had a long day at a conference at the Georg Eckert Institute for International Textbook Research, which has been advising and supporting the book project from the start. He is tired, but there is still so much to tell. 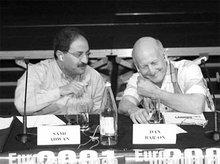 Together, Sami Adwan (left) and Dan Bar-On founded the 'Peace Research Institute in the Middle East' and began work on their concept for an Israeli-Palestinian history textbook

​​He returned from the USA in the late 1980s, taught at Hebron University, became a member of Fatah and was swiftly arrested by the Israelis. At that time, Fatah was still considered a terrorist organisation. During his first week in prison, he didn't know what he was charged with. His image of the enemy was confirmed.

But then the helpfulness of an Israeli made Adwan think again.

Something happened that didn't jibe with his worldview. He overheard two Israeli soldiers getting into an argument over him. It was about a document that Adwan was supposed to sign. We can't force him to sign something he can't read, said the one. Adwan understood just enough Hebrew to realise that a Jew was standing up for his rights, for the rights of a Palestinian. Later he saw an Israeli soldier bringing the prisoners water, although his superior had forbidden it.

A time when peace seemed possible

"These experiences changed my life." It became clear to him that not everyone was the same. He wanted to find out more about the Israelis. He wanted to talk to them. When after six months Sami Adwan was released from prison, in 1993, he did everything he could to launch a dialogue. The Oslo talks between Israel and the Palestinians had begun; it was a time when peace seemed possible.

He met with Israeli academics, got to know the psychologist Dan Bar-On from Ben Gurion University. Bar-On had caused a worldwide sensation by setting up meetings between Holocaust victims and children of Nazi criminals. Together, Bar-On and Adwan founded the Peace Research Institute in the Middle East (PRIME) and began work on their concept for an Israeli-Palestinian history textbook.

"What is taught in the schools can either foment conflict or contribute to finding a solution", says Adwan. The hope is that this history book will help to break down prejudices on both sides.

Bar-On and Adwan were not so presumptuous as to try to find a mutual interpretation of the Middle East conflict. They merely wanted to place the Palestinian point of view next to that of Israel. This would help to open the eyes of the other side. The texts were to be written not only by scholars, but also by teachers – after all, they are the ones who have to present the material to the pupils.

Two ways of looking at the facts

The three volumes now look like this: on the left side is the Israeli view of things and on the right side the Palestinian standpoint. In the middle there is space for notes, room for the pupils' own thoughts. This is how the book treats 20th-century Israeli-Palestinian history. This includes for example the Balfour Declaration of 1917, which promised the Jews their own nation, the period of uprisings against the occupiers known as the Intifada, and the wars of 1948 and 1967.

​​The facts are the same, but there are two ways of looking at them. The year 1948 for example means for the Israelis the war of independence and the founding of their state, but for the Palestinians a year of catastrophe, the nakba, or expulsion from their homeland.

It was not difficult to agree on the dates, but it was hard to accept the others' interpretation of them. "One person's terrorist is another person's hero", comments Adwan. Dan Bar-On, who died in autumn 2008, was interested in the "disarming of history".

The fact that this disarming must begin at school is something Adwan is more convinced of than ever after his analyses of Palestinian and Israeli history textbooks. He notes that:

"There is no acknowledgement in these books of what the others have suffered. No recognition of their rights, their history, their culture. The Holocaust hardly appears at all in the Palestinian books, while the Israelis ignore the expulsion of the Palestinians. In the maps the cities and villages of the other side are nowhere to be seen." No one knows anything about the others. "Schooling is therefore part of the problem", says Adwan, "and not part of the solution."

"Learning each other's historical narrative": this is the title of the new textbook, designed for upper school pupils. A dozen teachers in Israel and a dozen more on the West Bank are now working with the texts at selected schools. But not during regular classroom instruction, as the history book is not part of the official curricula. The respective ministries ignore it but tolerate it. The project is being funded by American foundations, the EU, the German Foreign Office and others.

It wasn't easy to arrange meetings between the writers – one never knew if all participants would make it through the checkpoints in time. The Georg Eckert Institute in Braunschweig finally offered neutral ground on which the Palestinian and Israeli teachers and scholars could regularly meet for seminars stretching over several days.

Before work on the content began, the teachers spoke with each other about their everyday lives. Some told of their fear of suicide attacks, others about the humiliations of occupation.

What motivated the teachers to take part in the project? For example, Maysoon Husseini al Tal, who wears a white headscarf with black ornaments. She teaches history at a girls' school in East Jerusalem. When a colleague asked her if she would like to work on the project, she realised that she had never before spoken with an Israeli.

She hesitated for a long time, she says. Her feelings told her no, you can't do it. But her head said: this is one way to speak with the Israelis, to set something in motion, to change things – go ahead and do it. She joined in, although her husband has a hard time accepting it. 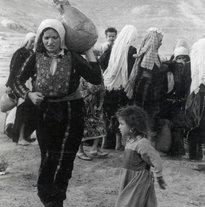 The year 1948 means for the Israelis the war of independence and the founding of their state, but for the Palestinians a year of catastrophe, the nakba, or expulsion from their homeland

​​Yiftach Ron, who teaches at an Israeli school, says he has a problem with how Israeli society treats Palestinians. He thought that working on the project was the best way for him to solve this problem. Some of the Palestinian teachers received threats from parents when they found out what their children were learning at school. Friendships have grown between some of the participants, such as between Adwan and Bar-On, but some have had to withdraw because they could no longer bear the emotional strain.

Like the teacher whose blind cousin earns his living with a kiosk. Israeli soldiers bulldozed the kiosk into the ground. The teacher said: "I can't work with you all anymore; otherwise I won't be able to look him in the eye." Another reports that one of his pupils was shot.

During the latest war in Gaza people on both sides were speechless. All work was suspended, meetings cancelled and conferences postponed. In the meantime, the participants have pulled themselves together again.

A more cautious assessment of the "others"

And what about the pupils? Maysoon Husseini and Yiftach Ron have for the most part had good experiences in their classrooms. Others report that the pupils in Israel often find the Palestinian interpretation of history in the book too emotional, verging on propaganda. Many Palestinian pupils say that, even if they do develop more understanding for the Israeli view of history, it will hardly change anything about their situation.

The evaluation is still in progress, and at the end of July the project is to be presented at an international conference. Adwan remarks that most of the pupils are now less sweeping in their judgements, more cautious in their assessments of the "others". It's a start. "All we can do is hope", he says.

Until there is a political solution to the conflict, the project will not be able to emerge from its niche. But the mere fact that the joint project was able to get underway and be successfully concluded, despite escalations in the conflict, is already a promising sign. And it's setting a precedent: Skopje University in Macedonia has published an Albanian-Macedonian history book based on the same principle.

Asked if he thinks the history textbook will ever be part of the regular curriculum, Eyal Naveh, history professor at the University of Tel Aviv, replies: "Not in my lifetime." But that doesn't stop him from pushing for it to happen.

How long the road ahead might still be is demonstrated by the difficulties encountered in trying to find the right location for the final project conference. Some of the people interested in the book were nonetheless not prepared to sit in the same room with Palestinians, respectively with Israelis, Adwan remarks.

And many would perhaps not be able to pass the checkpoints in time. The organisers therefore decided that the conference should be held simultaneously in two places: Ramallah and Tel Aviv, connected by means of videoconferencing.

Joint Palestinian and Israeli Curriculum Project
Learning Each Other's Historical Narrative
In 1998, the Palestinian educationalist Sami Adwan and the Israeli psychologist Dan Bar-On founded the Peace Research Institute in the Middle East. Now, they have developed an unusual history textbook for the school system. By Joseph Croitoru

END_OF_DOCUMENT_TOKEN_TO_BE_REPLACED
Social media
and networks
Subscribe to our
newsletter