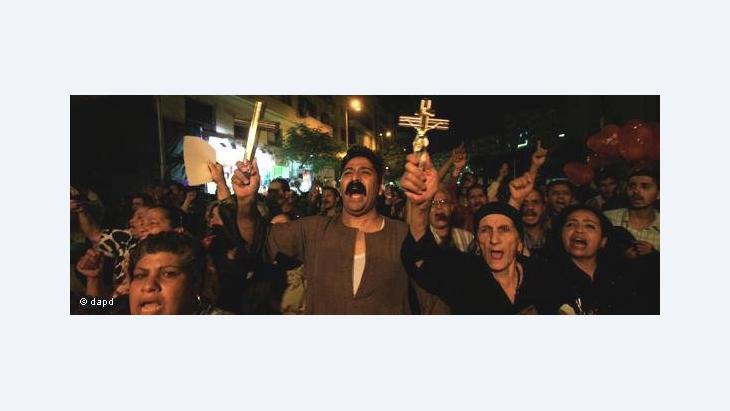 The Military's Attack on Egypt's Copts

A Call for Civil War

﻿What began as a peaceful demonstration by thousands of Coptic Christians quickly escalated into a widespread attack by the military against the protesters. What we witnessed on Sunday evening in the streets of downtown Cairo was state-sponsored violence and murder. A commentary by Joseph Mayton

Sectarianism, long stifled through the former regime's ability to appease different groups has been fomenting for years. On Sunday, the Supreme Council of the Armed Forces (SCAF) used a sinister media game to deliver false accusations against the Coptic protesters, telling the country they had attacked the army and were using children as human shields.

Then, hours after the first bodies had been seen, bloodied and limp, State television again played on sectarianism, imploring Egyptians to "take to the streets to protect the armed forces".

The result was that ultra-conservative Muslims converged on downtown Cairo, armed with guns, sticks and rocks, meeting the protesters, who by late in the evening had become a cross-section of Egyptian society angry at the military, with violence. The result was death on a scale not seen since Mubarak's "thugs" killed nearly 1,000 during the January revolution.

Violence inspired by the military 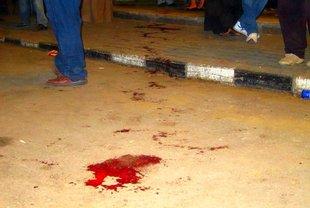 Bloody Sunday: The military was at fault on Sunday for inspiring violence, killing its own citizens and delivering what could be a knockout blow to any potential reconciliation between the Coptic community and the Muslim majority, Mayton writes

​​By calling on Egyptians to take up arms against the Coptic population, the military was in essence telling its citizens to begin a civil war. One only they would be able to end, thus solidifying Egypt's need for a military presence at the top. It is a dangerous game being played and one that if not countered immediately and through concerted efforts could spiral into chaos that will bring only more violence.

The military was at fault on Sunday for inspiring violence, killing its own citizens and delivering what could be a knockout blow to any potential reconciliation between the Coptic community and the Muslim majority. Now the military has more "evidence" that they are needed, that the draconian emergency laws are vital to the stability of Egypt's future. The game could only have been played better by Mubarak, who is currently on trial for ordering the killing of protesters in January.

There is also another important facet of Sunday's violence: Muslims seemed all too ready to take up arms against their Coptic brethren. The comments heard throughout the evening by bystanders and others were shocking, saddening and scary. Some called for Copts to be killed, others insulted Coptic Pope Shenouda, while still others showed their anger toward the Christians through violence.

Looking forward, Egypt and its people must understand what occurred on Sunday. Already, this is happening, showing that despite the state violence meted out against its own citizens, there is a glimmer of hope through the death and destruction. 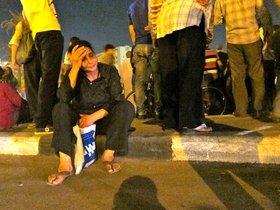 "Let us not kill each other." - Because of Egyptian sensibility and solidarity, there is a glimmer of hope through the death and destruction, Mayton says

​​As one activist, a Muslim man, who's shirt was soaked in blood and a bandage wrapped around his forehead said eloquently late on Sunday evening: "Mubarak killed us, the military is killing us, but let us not kill each other." He added that despite the violence, "Egypt can be a country where we all live together because we all want the same things."

The problem, however, is that Sunday showed there is long-held antagonism between the two religious groups, which over the years has seen a number of clashes and violence between Muslims and Christians across the country.

The military understands this, latched on to the hatred that often permeates the more conservative sections of both communities, and has created what could be the final rift in the unity that so tenuously has existed since February 11, when Mubarak made his final curtain call.

Right now, 24 hours since one of the bloodiest days in Egyptian history, there is little hope, much frustration and massive anger online and among the Christian community. What happens next could very much determine the future of Egyptian society and the revolution itself.

Most importantly, the military has joined the Mubaraks, the Gaddafis, the Salehs and the Assads of the region in killing its own people. The question on Monday, as thousands of Christians begin to gather in the early evening hours is simple: what happens next?

﻿Joseph Mayton is an American journalist based in Cairo, Egypt, writing for, among others, the english daily 'The Guardian'. He is currently working on a book about the Muslim Brotherhood and is founder and editor of the website Bikya Masr.

Home
Print
Newsletter
More on this topic
Egypt before the First Post-Mubarak Parliamentary Election: Organised UncertaintyRelations between Christians and Muslims in Egypt: Civil Society Instead of Confessionalism
Related Topics
All Topics
Date:
Mail:
Send via mail

END_OF_DOCUMENT_TOKEN_TO_BE_REPLACED
Social media
and networks
Subscribe to our
newsletter