Trump himself has emphasised repeatedly that his Iran policy is designed to bring the Iranian leadership to the negotiating table. As unlikely as this scenario may be, Trump is looking for a new deal, a summit and photo-op with the Iranians, not least because the Iranian regime’s domestic repression and human-rights violations do not concern the U.S. president much.

Although Trump’s military reluctance has barely changed the belief of many European policymakers and analysts that Washington continues to pursue regime change in Iran, neo-conservative ideologues are no longer in positions of power, unlike during the presidency of George W. Bush. The U.S. has lost its appetite for costly interventions in order to purportedly democratise the Middle East, a region in which Iran has been able to extend its power and influence considerably, not least because of the 2003 U.S.-led Iraq War and more recently by the power vacuum left by Washington’s relative retreat from the region.

Khamenei and his circle strive to maintain the narrative of enmity between America and Iran, precisely because of the offer of talks from Washington.

Iran’s Supreme Leader had reportedly already warned then-President Mohammad Khatami that the Islamic Republic needed the enmity against the U.S. to stay in power. The rationale behind this is both ideological and political. Ideologically, the worldview of the octogenarian is marked by intense anti-Americanism. Politically, Khamenei is reluctant to let Iranian president Hassan Rouhani reap the benefits of a potential arrangement with Washington, which would give the president more clout in the midst of an ongoing power struggle for Khamenei’s succession. 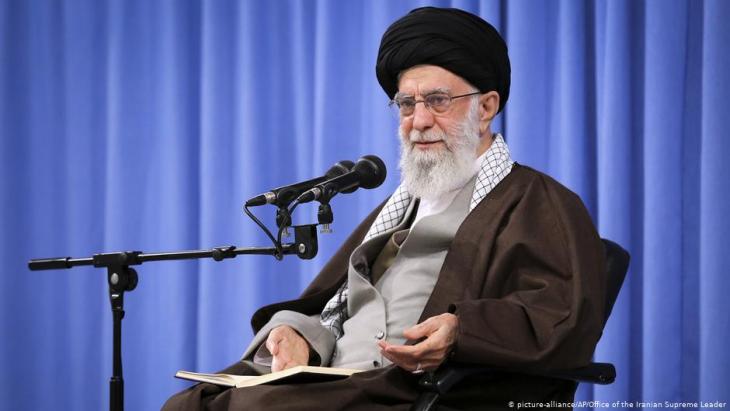 Clinging to the image of "The Great Satan": Khamenei had reportedly already warned the then-President Mohammad Khatami that the Islamic Republic needed the enmity against the U.S. to stay in power. The rationale behind this is both ideological and political. Ideologically, since the octogenarian's world view is marked by anti-Americanism

In this vein, Rouhani said on November 12 that during the UN General Assembly in mid-September there were "some good proposals" tabled to end U.S. sanctions, yet "Iran decided not to accept" them – implicit criticism of Khamenei’s red light attitude to engaging with Washington.

All this does not mean that, as on the eve of the negotiation process leading to the JCPOA, Khamenei and his circle would be categorically opposed to secret talks with the U.S. if those served the survival of the regime. But as long as opening up to the West threatens the economic dominance of the hardliners around Khamenei and the Revolutionary Guards, at the same time strengthening their domestic opponents in a complex domestic power struggle, Khamenei continues to nourish the image of the U.S. as the "Great Satan".

Meanwhile, anti-American rhetoric does not stick easily in Iranian society. Many Iranians wonder why the regime rejects negotiations with the U.S., even though they are essential for improving their living conditions.

"The enemy is right here at home"

A spectacular example is a slogan that has been heard over and over again in recent protests: "They (the rulers) always say it’s America, but the enemy is right here at home." The most recent protests after the fuel price rise support the impression that the Iranian people blame their own leadership for their hardship rather than ‘foreign enemies’.

To be sure, the wars in Iraq and Afghanistan as well as U.S. support for Iran’s regional foes, notably Saudi Arabia and Israel, have created a great deal of scepticism in Tehran about Washington’s intentions. However, a sober analysis shows that Trump has no regime change ambitions and little interest in democratising Iran.

Talks with the Iranian regime in the current climate remain unlikely, not least because of Khamenei’s fixation on clinging to power by keeping alive the narrative of American hostility. Recognising this would be a first step for the transatlantic community to craft a much-needed common Iran strategy beyond the increasingly obsolete JCPOA.

Dr. Ali Fathollah-Nejad has been a visiting fellow at the Brookings Institution in Doha since fall 2017. Prior to that, he was the Iran expert for the German Council on Foreign Relations (DGAP) and a postdoctoral associate with the Harvard Kennedy School’s Iran Project.

Turkey's parliamentary and presidential elections are scheduled for June 2023. But they are already casting a shadow. While the opposition is calling for early elections, ... END_OF_DOCUMENT_TOKEN_TO_BE_REPLACED

Despite promises to the contrary, the social and economic situation in Iran deteriorated under President Rouhani, prompting two nationwide revolts in recent years. Yet the social ... END_OF_DOCUMENT_TOKEN_TO_BE_REPLACED

Starting 29 May, the "Epic Iran" show at London's Victoria & Albert Museum delves into 5,000 years of art, design and culture of the country. ... END_OF_DOCUMENT_TOKEN_TO_BE_REPLACED

By stage-managing his re-election in a poll widely dismissed as a farce, Syria's President Bashar al-Assad has killed two birds with one stone: he has forced his compatriots to ... END_OF_DOCUMENT_TOKEN_TO_BE_REPLACED

On the face of it, the Iran of 2021 still bears considerable resemblance to the Islamic theocracy that was established following the overthrow of the Shah in 1979. Yet, although ... END_OF_DOCUMENT_TOKEN_TO_BE_REPLACED

Among the authors writing in German who are not native speakers of the language, SAID, who was born in 1947, was among the most successful and the most unconventional. Highly ... END_OF_DOCUMENT_TOKEN_TO_BE_REPLACED
Author:
Payam Ghalehdar & Ali Fathollah-Nejad
Date:
Mail:
Send via mail

END_OF_DOCUMENT_TOKEN_TO_BE_REPLACED
Social media
and networks
Subscribe to our
newsletter