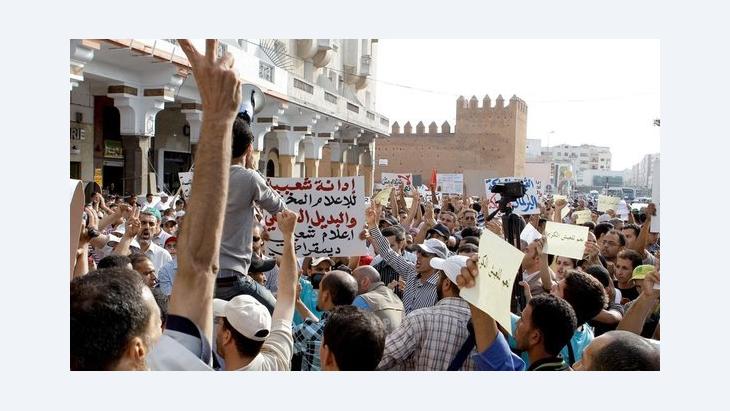 The Moroccan Pro-Democracy Movement
Down, But Not Out

﻿The Moroccan protest movement has lost much of its initial momentum. A clever strategy on the part of the palace, that has combined political concessions with repression, a lack of allies, the international economy and the fate of the uprisings in other Arab countries have all severely weakened the movement. But the Kingdom of Morocco has not seen the last of protests and uprisings. By Beat Stauffer

﻿In Sidi Youssef Ben Ali, a simple suburb of Marrakech, on December 28, violent demonstrations broke out. Around three thousand people took to the streets to protest over a sudden increase in electricity and water prices. For members of the pro-democracy 20 February protest movement, many of whom also belong to the independent human rights organisation AMDH, or to small left-wing parties, it was proof that reports of their demise in the media were premature and that their movement is still very much alive and kicking.

Protests that took place in several cities in late November over the enormous palace budget – around 230 million euros a year – which were put down with great severity, are also seen by members as evidence of the movement's surviving courage and creativity and its consistency in tackling the important issues. 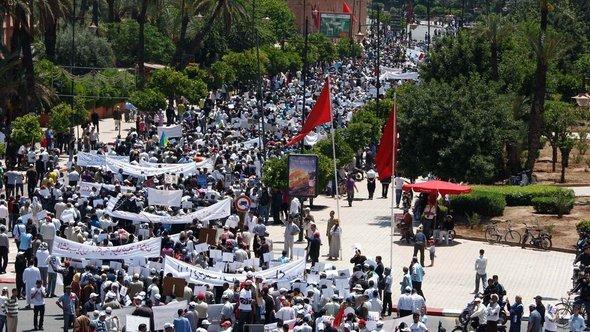 Fading dynamism of the uprising: Morocco's protest movement, which, in spring 2011, succeeded in bringing hundreds of thousands of people in over 50 cities onto the streets, which was backed by celebrities and succeeded in putting the palace under severe pressure, is currently very much weakened

​​It can hardly be denied, however, that the movement, which, in spring 2011, succeeded in bringing hundreds of thousands of people in over 50 cities onto the streets, which was backed by celebrities and succeeded in putting the palace under severe pressure, is very much weakened. "In March 2011 it was the king who was on the defensive, today it is the 20 February movement," says Mohamed Madani, of the University of Rabat. The movement, he believes, has lost much of its former momentum, with many local groups ceasing their activities altogether.

The lack of powerful allies

How has it come to pass that this once so powerful and spontaneous movement, so strongly supported by middle class youth, has faltered? Madani identifies three main reasons. From the outset, the 20 February movement has lacked powerful allies. None of the major parties has been willing to address M20 concerns and the trades unions have remained extremely reticent. The banned "Justice and Charity" movement, which definitively withdrew from the M20 in December 2012, was never able to take on this role on account of its illegality.

Madani sees a second important reason in the fact that the palace has moved to address, at least partly, some of the important M20 demands – the demand for a new constitution, for example, or for early elections. The pro-democracy movement may not be happy with the result, but getting this across to the general public is much more difficult. "It is much easier to demand a new constitution than it is to criticise it afterwards," says Madani.

Ultimately, the repression to which the M20 movement was subjected has also played a significant role. It has not been of the unadulterated brutal variety characteristic of other Arab countries. The Moroccan regime's handling of the protest movement has alternated between accommodating leniency and uncompromising severity, a tactic that has increased feelings of uncertainty among potential protest participants. 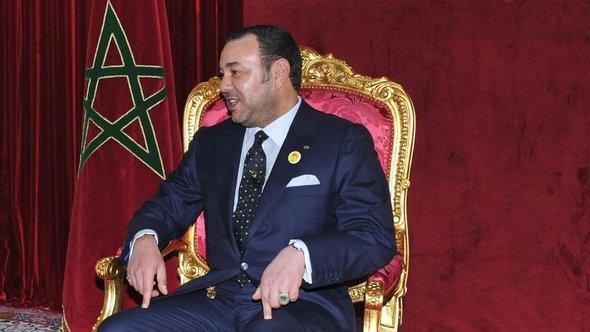 Divide and rule: "In March 2011 it was the king who was on the defensive, today it is the 20 February movement"

​​At the same time, the palace has subtly disseminated fear among school pupils and university students by making it clear that any person participating in the demonstrations – in particular in any demonstrations directed against the palace itself – would also be participating in the destruction of their own career prospects. As one activist told Qantara, this has been sufficient to dissuade many completely from taking any further part in the monthly protests.

The direction taken by some of the Arab uprisings has also been an important factor. "The people are afraid of the kind of chaos that happened in Libya, or even of a Syrian-style civil war," one person told us. And the regime systematically fuels such fears by giving a great deal of press coverage to reports of the turmoil caused by revolution.

On the other hand, the significant learning processes on the road to democratisation – the Tunisian Constitutional Council, for example – are not mentioned.

The Islamist government of Abdelilah Benkirane, which has always distanced itself from the protest movement, has a very mixed record after one year in office. For entrepreneur Karim Tazi, who became famous in the country for his support of M20, the government's performance has been poor. "One year on and there are only losers in Morocco," he told Qantara.

People are losing any hope that elections are going to change anything in Morocco, and the Islamist government, he feels, are going to fail in the task that they have set themselves. But Tazi also sees the palace as among the potential losers. It risks losing its "a which currently only the PJD Islamist party – wedged between a frustrated population and the political institutions, in particular the palace – represents.

Not all observers see things so negatively however. According to one university lecturer from Marrakech, the PJD still enjoys a great deal of trust. Mohamed Madani, too, believes that the vast majority of the middle class are continuing to give their support to the Benkirane government. They are aware that at the present time the government has little room for manoeuvre. 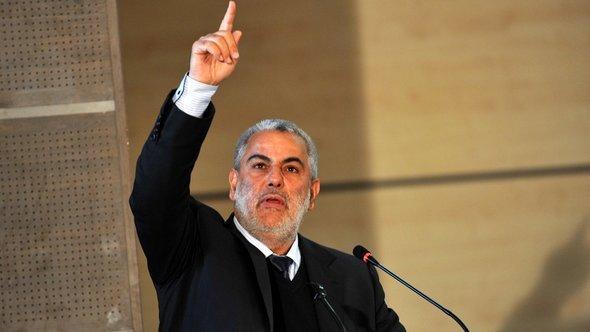 The King's "emergency backup": The Islamist government of Abdelilah Benkirane, which has always distanced itself from the protest movement, has a very mixed record after one year in office. But the vast majority of the middle class are aware that at the present time the government has little room for manoeuvre

​​He also points out that Benikrane had managed what amounted to a minor miracle by somehow making a significant rise in fuel prices palatable to the population without incurring a national revolt.

Will Morocca continue to be spared the future storms of the Arab Spring? Observers believe this is unlikely. The character of the protests has changed in recent months, Madani says; it is no longer in the hands of the educated middle classes in the major cities. Now it is much more the lower social classes, those living on the brink of poverty, who are increasingly taking to the streets to protest against the rising cost of living.

Most of these protests were now in the impoverished and disaffected provincial towns, such as Sefrou, Sidi Ifni or Safi. For those malcontents who hardly understand what constitutional reform is, life since the outbreak of the Arab uprisings has also become much more difficult.

According to Madani, the regional protests and uprisings thus far have been poorly coordinated. If this should change, however, and the local groups should succeed in linking up into a national network, then things may become rather uncomfortable for the Benkirane government and the palace. "These new uprisings, and those behind them," Madani is convinced, "are likely to be much more difficult to control."

Algeria‘s regime is again cracking down on anti-fracking activists and the unemployed in the country‘s south. Yet EU countries remain keen to scale up their energy cooperation ... END_OF_DOCUMENT_TOKEN_TO_BE_REPLACED

Algeria's decision to unilaterally sever diplomatic ties with Morocco in August 2021 – days after the presidency announced in a statement their relations would be reviewed – was ... END_OF_DOCUMENT_TOKEN_TO_BE_REPLACED

Madrid's about-face on the Western Sahara conflict has enraged Algeria. Trade relations have been frozen unilaterally and a cut in gas supplies to Europe could be in the pipeline ... END_OF_DOCUMENT_TOKEN_TO_BE_REPLACED

Sultana Khaya, 41, has been peacefully resisting the Moroccan occupation of Western Sahara for many years. Because of her campaign to assert the self-determination of the Sahrawi ... END_OF_DOCUMENT_TOKEN_TO_BE_REPLACED

Since Spain abandoned its traditional neutrality towards the conflict in Western Sahara, Morocco has announced a "new phase" in relations between the two countries. But what is ... END_OF_DOCUMENT_TOKEN_TO_BE_REPLACED

Russia's ranking on the World Press Freedom Index has fallen again over the Kremlin's wartime censorship of the Ukraine conflict. From Myanmar to Mexico, journalists continue to ... END_OF_DOCUMENT_TOKEN_TO_BE_REPLACED

Comments for this article: Down, But Not Out

Here is another observer for you, and this one sees no "uprising" whatsoever going on. I think it's insulting and incredibly arrogant to belittle Moroccan citizens' intelligence, stating that "they don't understand what a constitution is". And even if that was the case, Moroccans ave complete and extensive coverage of what happens in Tunisia, Libya, Egypt and Syria, through multiple satellite Tv channels and do understand what's happening around them. That's why the 20Fev movement did falter, it only attracted a small, but vocal group, and even those supporters are nowhere to be seen now.
I guess only time will tell, but I wouldn't bet on any "uprising" in Morocco if I were you.
Regards.

END_OF_DOCUMENT_TOKEN_TO_BE_REPLACED
Social media
and networks
Subscribe to our
newsletter