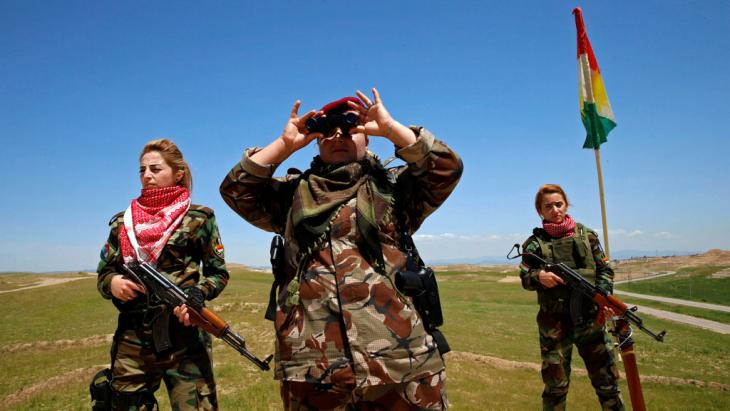 The Mosul offensive
In enemy heartland

Progress is slow in the battle for control of Mosul, with IS jihadists using booby traps and suicide commandos against the liberators. Karim El-Gawhary spoke to Kurdish fighters and refugees in some of the villages recaptured by the peshmerga

Bartella, the first town recaptured close to Mosul, a town where most of the residents are Christians, is a ghost town – for good reason. The inhabitants fled two years ago when IS jihadists took over the place. None of them are able to return at the moment because of all the IS booby traps.

Our guides from the elite Iraqi army anti-terror unit, who stormed and captured the town the previous day, continuously remind us to stick to the paths already cleared and secured by the army. On no account should anyone enter any of the houses, they warn.

Some buildings have the words "Property of Islamic State" stencilled on them in paint. In the Caliphate too, there is evidently bureaucratic order. The inside of the local Internet cafe is totally demolished – just like most of the shops in the village. The words "Seized by Islamic State" are written on the door. Many shops in Bartella have been cleared out. Inside the tailor's shop, there's still a wedding dress hanging on a rail, it now looks more beige than white. The bride obviously didn't have enough time to collect it.

Despite the fighting, most of the houses in Bartella have remained intact. The obvious signs of battle are on the edges of town. Several buildings, among them a warehouse and a shopping arcade, look as though they have been bombed from the air by the anti-IS coalition.

The capture by ground troops apparently happened very swiftly, reports the Iraqi soldier Rassul Ali, who climbs out of his armoured military jeep and points to some writing on the wall of a house: "The Mosul Battalion was here" it reads. Ali then writes the date that he entered the town alongside it: "21/10/2016". It appears as though all conquerors of this place initially feel compelled to leave their mark on houses. 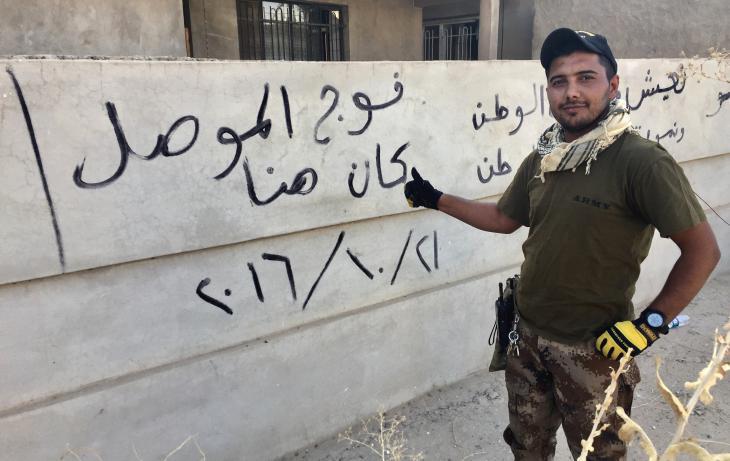 It appears as though all conquerors of this place initially feel compelled to leave their mark on houses: Iraqi soldier Rassul Ali points to some writing on the wall of a house: "The Mosul Battalion was here" it reads. Ali then writes the date that he entered the town alongside it: "21/10/2016"

Apart from some devious traps, there was hardly any resistance, says the soldier, describing his arrival in the town. "We were confronted with many cars that were loaded up with explosives. We had to make 21 vehicles safe in total. We also found many booby traps. Some IS people were holed up here. We killed them all," he says.

The church, which has been ransacked, symbolises IS rule over the majority Christian town. From outside the building is still standing and it was clearly used by IS fighters, as some walls also bear the usual black-and-white IS signature. The altar looks like a battle field. The electronic church organ has been totally smashed up, with broken shards lying around the pulpit. Anything that wasn't nailed down has been taken away. As though in defiance, the church bells ring on the first day following the liberation from the IS terror militia.

About an hour by car from Bartella is "Umm al-Nour" – the "Mother of Light" – a church in the Kurdish provincial capital Erbil. It is here that the refugee community from Bartella celebrates Sunday service. Majida Thoma is one of those praising the liberation of her town in the church of God. "I could hardly believe my good fortune, when I heard the news of the liberation of our town, which is something I always believed would happen," she says, after the service. "I even saw our house on television and it hasn't been damaged," she says. "It's the green one, right at the top of the street," she reports enthusiastically.

Father Saady Jakoub, the priest of the congregation exiled from Bartella, is visibly happy, even though the church interior has been completely destroyed. In response to enquiries about the many former members of his congregation who fled to Europe and who have started new lives there, the priest answers that he is optimistic that many of them will return. "After all, our roots lie in our town, our ancestors are buried there," he says.

Excellent co-operation with the Iraqi army

A change of location to another place on the front, this time 18 kilometres north of Mosul, near to the village of Nawara – there, where Kurdish pershmerga are fighting IS and where Halgord Hikmet, a spokesman for the armed forces of the autonomous region of Kurdistan is waiting for us. "We are currently attacking on three axes, although we are only making slow progress because of the booby traps and snipers and we have to proceed with great care," he describes the situation. 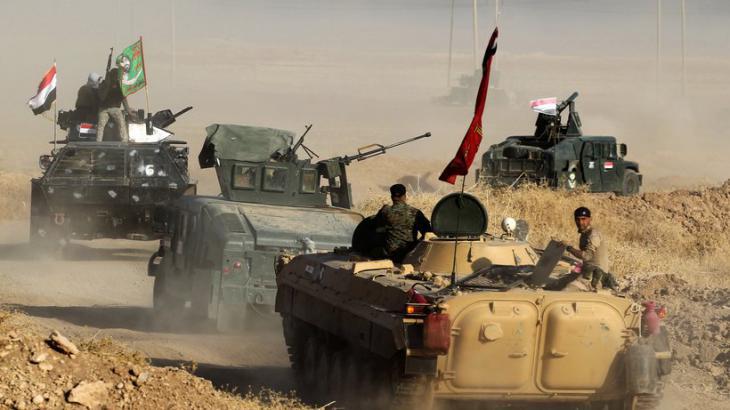 A tense regional alliance: Turkey is insisting on being involved in the offensive to wrest control of Mosul from IS. The Iraqi government in Baghdad, on the other hand, is against any participation by Turkish forces and is fundamentally opposed to their presence on Iraqi soil. The Iraqi army is being supported by both pershmerga units and Shia militias. The anti-IS coalition is providing back-up in the form of airstrikes. There are currently more than 4,800 US soldiers in Iraq. More than one hundred of them are advising the Iraqi armed forces and the Kurdish pershmerga on the Mosul offensive

American air support is also key in the battle against IS, he says. The pershmerga spokesman also praises the excellent co-operation with the Iraqi army, which is operating further to the east and south. "Never before in Iraqi history have Kurds and Arabs been so well co-ordinated as they are now against IS," he says. It is as though he is hoping for the birth of a new Iraq – despite all the merchants of doom who repeatedly warn that following the capture of Mosul, the differences between Kurds and Arabs, as well as those between Sunnis and Shias, will immediately resurface.

We can repeatedly hear and see rocket attacks, whenever anti-IS coalition fighter jets bomb suspected jihadist positions. The villages directly ahead of us are actually regarded as safe, but here, you should only drive on in a military vehicle that's been equipped with a chip identifying it as an "allied vehicle" to the fighter jets. But even that doesn't always provide protection.

In the village directly up ahead of us, suddenly a booby trap is triggered that has been left behind by IS – not far from the house where the pershmerga have hoisted their Kurdish flag. The actual plan had been for us to accompany the Kurdish fighters the day before to another captured village two kilometres away. But a few hours ago, an IS fighter holed up in a tunnel blew himself up in front of a group of pershmergas. Six of them were killed, including five members of the same family. Danger lurks everywhere. You can sense it at every turn.

A few kilometres along the road to the north, the situation is more peaceful. Here we find the Nargazliya reception and registration camp. It is open for those civilians, most of them Sunnis, who held out in the villages and are now able to escape the clutches of IS. Today, the first 80 refugees have arrived from the nearby village of Dayraga.

Their new lives begin with a medical examination. Tired and exhausted, the women and children sit in one of the large tents waiting patiently for the process to continue. The men are separated from their families and questioned by pershmerga intelligence officers who prevent us from approaching the refugees for the moment. This is to ensure that no IS fighters have slipped into the camp, we are told by the military. We are nevertheless able to talk to one of the men briefly.

"The IS fighters took up positions right in the midst of our houses and shot at the pershmerga," says Salah Ibrahim, who came here with his family and nothing else but the clothes on his back. "The pershmerga then attacked our village with grenades. That went on from early yesterday until this morning. Then the fighting subsided, because the IS fighters fell one after the other. Eventually we came out of the houses with white flags and we were received by the pershmerga."

Life in the so-called "Islamic State" had been terrible, reports Salah Ibrahim. Women had to cover themselves completely. The school was closed. "We just vegetated. We were not allowed to own anything – no mobile phones, no televisions. We were not even allowed to shave. And we were forced to attend the mosque regularly. If you didn't show up for prayers, you had to pay the equivalent of 40 euros or you got a beating," he says. Then the conversation is interrupted. A pershmerga officer sends the journalists away. The new arrivals are to be taken to a different camp today, he says.

For the Sunnis Salah and his family, the first day without IS rule begins – a harsh life, in some tent camp set up in recent weeks by the Kurdish government and the UN Refugee Agency. Just how long the Mosul offensive will go on and when they can return to their villages, no one can say for sure at present. After a life in the hell of the IS Caliphate, they are now embarking on a new life in distressing uncertainty.

The clashes in Baghdad between supporters of Muqtada al-Sadr and pro-Iranian militias show that an intra-Shia power struggle is in full swing. An analysis from Cairo by Karim El- ... END_OF_DOCUMENT_TOKEN_TO_BE_REPLACED

Bachtyar Ali sends the hero of his latest novel – "Mein Onkel den der Wind mitnahm" – literally flying. Jamshid is so thin after his years as a political prisoner that a gust of ... END_OF_DOCUMENT_TOKEN_TO_BE_REPLACED

In this essay, renowned Lebanese journalist and writer Hazem Saghieh asks whether the Arab Levant, which stretches from Iraq in the east to Egypt in the west, will remain an ... END_OF_DOCUMENT_TOKEN_TO_BE_REPLACED

Climate change is taking its toll on communities in Iraq. Younes Ajil turns on the tap in his home but nothing comes out. Villages in the south of the drought-hit country are ... END_OF_DOCUMENT_TOKEN_TO_BE_REPLACED

END_OF_DOCUMENT_TOKEN_TO_BE_REPLACED
Social media
and networks
Subscribe to our
newsletter