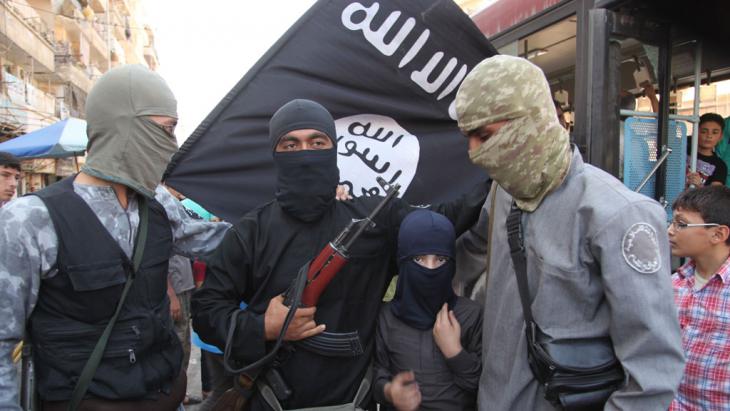 The Mosul offensive
The Caliphate's cubs

In the battle for the Iraqi city of Mosul, Islamic State jihadists are fighting with their backs to the wall. In their desperation, they are increasingly deploying child suicide bombers. Judit Neurink reports from Irbil

His fear is almost palpable. The 15-year old who was caught wearing an explosives belt outside a Shia mosque in Iraq's oil city of Kirkuk is crying silently while two policemen hold his arms out wide to prevent him from yet igniting the explosives.

In August, IS sent him to Kirkuk, just like another boy of his age, who did manage to blow himself up minutes earlier in another Shia mosque.

The group has lately stepped up the use of children as suicide bombers. Days after the boy in Kirkuk was caught, four teenagers carried out an attack in the Iraqi Shia town of Karbala. In March another boy did the same at a youth football match in southern Iraq.

Teenagers were recently also allegedly used in propaganda footage showing the execution of five Kurds captured in Syria; clad in uniform fatigues, a young Kurd and four sons of foreign IS fighters – a Brit, an Egyptian, a Tunisian and an Uzbek – shoot the captives with their pistols.

IS training videos involving kids have surfaced before. Thousands of boys – the sons of its fighters and local Iraqi and Syrian sympathisers, as well as kidnapped boys of the Yazidi minority – have been put through their paces at IS training camps in the past two years, moulding them as "cubs of the Caliphate." 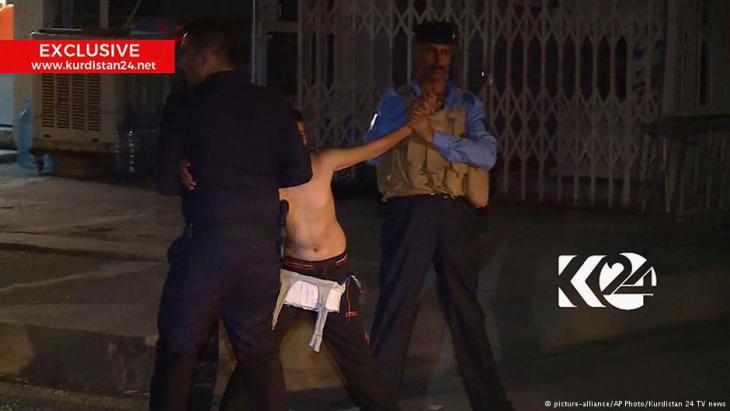 Minors as walking bombs: panic flares up in the eyes of this boy, apprehended on the street by police in the northern Iraqi city of Kirkuk. He looks young, barely more than a child – yet he has two kilos of explosives wrapped around his body under his t-shirt. Thanks to his arrest on August 24, the Iraqi police were able to prevent a suicide bombing. The day before, 52 people died in similar circumstances as they attended a Kurdish wedding in the Turkish town of Gaziantep

How the group works to turn kids into lethal weapons is a story that centres mainly around fear, as four boys who were able to escape testify.

Ahmed and Amir Amin (16 and 15) said they spent three months in the IS training circuit after they were kidnapped from the Yazidi region of Sinjar. Even though it's been a year since they escaped and though they now live with relatives in a camp in the Kurdistan Region of Iraq, they still suffer from nightmares.

They were first instructed to learn the Koran by heart and taught how to pray. "If you made mistakes, they beat you with cables," Ahmed says. The cables were used for all punishment: when he was betrayed by other boys for the phone he was hiding to call his family, he received 250 lashes. "My back and chest were open and swollen," he reports.

Adel Jalal (13), who was with his brother Asse (11) for nine months in a group of younger boys, says IS fighters threatened to kill them. He remembers how some boys who had made mistakes were taken out, "and then we heard shots. We were so scared. We did not see them after that."

At the same time, the kids were taught that violence was something very normal. Every morning they were shown videos of beheadings with knives and killings. "The first times I saw them I was so scared," Amir says, while Ahmed "wondered how I could kill someone like that. They told us we had to kill Yazidis and unbelievers that way."

The boys say they eventually grew used to the videos, although Ahmed says he often did not sleep as he kept seeing the images before his closed eyes. For IS fighters, killing people is normal. "They said, You have to learn it, for we will take you to another Arab country and you will have to cut off heads. As a Muslim, you have to kill unbelievers." 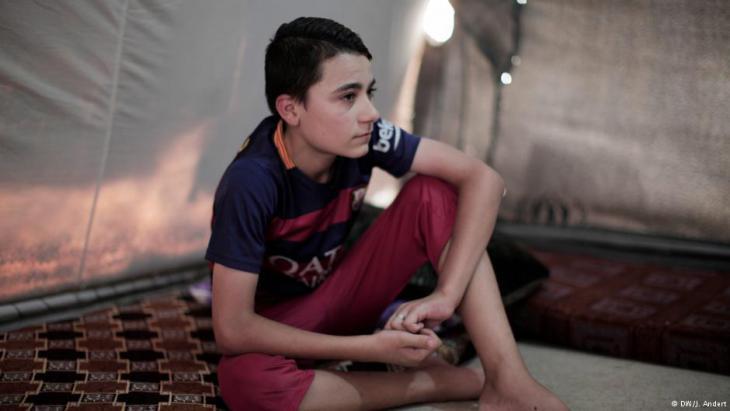 The clutches of IS: Adel Jalal (13), who was with his brother Asse (11) for nine months in a group of younger boys, says IS fighters threatened to kill them. He remembers how some boys who had made mistakes were taken out, "and then we heard shots. We were so scared. We did not see them after that," says Adel

According to Ayad Ajaj, who leads the Mithra NGO for aid to Yazidis in the Kurdish town of Duhok, these videos were only the first phase in the process to get kids to commit violence themselves. He talked to 16 Yazidi boys who escaped from the training camps and they told him that after the videos, they were given a doll to practice beheadings. A picture of such a doll in an orange jumpsuit was posted on the Internet by a worried father over a year ago.

Yet the four boys do not confirm this practice, nor the next phase that Ajaj illustrates with another picture: It shows a group of boys; one is holding a severed head by its hair. "At least five boys told me that they had to watch while someone was beheaded before their eyes," Ajaj says.

All have been instructed on wearing a bomb vest that had the explosives sewn into white cloth and was worn around the waist. "They told us how to use it and how to blow ourselves up," Adel says. "They put it on and took us in a car somewhere where we walked in the streets."

It was clear from the beginning they could not refuse, the boys say. "Perhaps they would kill me and take another boy," says Adel.

For older recruits, the 72 virgins in paradise are an important incentive. For younger boys, other promises had to be invented. "One boy told me that Daesh had said to him that if he killed the Kurdistan President Massoud Barzani, or the religious leader of the Yazidis, the Babasheik, he would be given a palace of gold and would go to heaven. They told him earth is nothing, but he would be happy in paradise," says Ajaj.

The boys say they were given drugs to expedite the process. The police chief of Kirkuk, Sarhad Qadir, says the boy who was caught with the bomb vest seemed "drugged and reacted strangely." A number of Yazidi boys who escaped told the German magazine Der Spiegel that they were given pills that were making it easier to bear the violence.

Repetition is an important part of the indoctrination process. Time and again they were told that unbelievers have to be killed. For Adel and Asse, the effects of nine months of living in fear is still present. Asse, who was nine when he was kidnapped, has suppressed much of it, but Adel admits that he had become quite intoxicated: "They said I was Muslim and would remain so forever. They emptied my memory, so I would only know of Daesh and would not remember the Yazidis. And I did not remember it anymore."

Ahmed kept a habit that he hates. "When I am alone, I recite the Koran. I try to forget it, but it does not work. I really want to forget it."

The increased appearance of child suicide bombers seems to coincide with IS losing more and more territory and fighters. American military sources say that the group lost 45,000 fighters in two years and has only some 15,000 left. The operation for the liberation of the IS' capitals of Mosul and Raqqa is underway and over 50 percent of IS-held territories in Iraq have been liberated.

To mask the defeat, IS has increased its bomb attacks using trucks. Pictures posted afterwards of the drivers show that many of them are teenagers. Sources say that as many as 60 percent of the IS fighters are under 18. Kirkuk police chief Sarhad Qadir thinks IS is playing its last card. "They know they will be defeated," he says.

Historically Iraq's Yazidi community was isolated, under-resourced and very conservative. Seven years after the "Islamic State" tragedy, the community is more open to the world – ... END_OF_DOCUMENT_TOKEN_TO_BE_REPLACED

Asef Bayat, professor of Sociology at the University of Illinois, Urbana-Champaign, has been studying revolutions and how they affect people since 1979. In his recent book, " ... END_OF_DOCUMENT_TOKEN_TO_BE_REPLACED

Young people in northern Iraq are so disillusioned that many are trying to leave the country any way they can. Some fear widespread discontent could push people toward potentially ... END_OF_DOCUMENT_TOKEN_TO_BE_REPLACED

In this new bilingual edition, translated by Humphrey Davies, al-Jawbari, one of the thirteenth century's leading experts in skullduggery reveals all there is to know about the ... END_OF_DOCUMENT_TOKEN_TO_BE_REPLACED

In Iraq, returning families of IS fighters have to turn to local initiatives for help, as there is no official path home. Judit Neurink met with families on the ground END_OF_DOCUMENT_TOKEN_TO_BE_REPLACED
Author:
Judit Neurink
Date:
Mail:
Send via mail

END_OF_DOCUMENT_TOKEN_TO_BE_REPLACED
Social media
and networks
Subscribe to our
newsletter