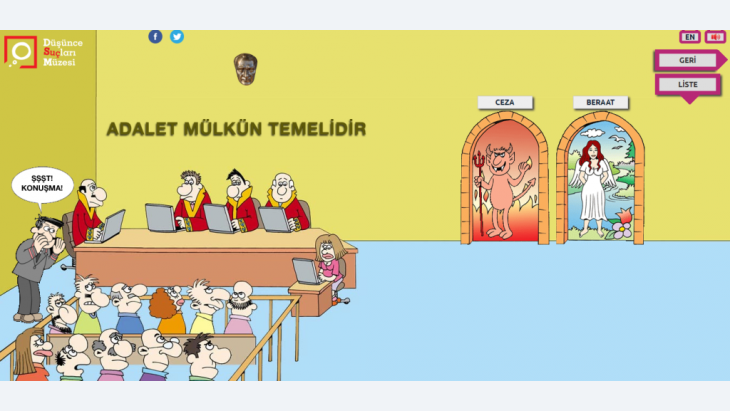 The "Museum of Crimes of Thought"

Novel weapon in the fight for freedom of expression

The people behind the recently launched online "Museum of Thought Crimes" hope to raise awareness of the suppression of freedom of speech and the persecution of intellectuals in Turkey and beyond. Ceyda Nurtsch talked to one of the project's initiators, Sanar Yurdatapan

When you enter www.dusuncesuclarimuzesi.net in your browser, a cartoon image of a street with a pink-brick building with two large windows displaying a rotating choice of photos pops up on your screen. Against a backdrop of initially military then cheery music, a car zooms past the building.

This is the homepage of the "Museum of Crimes of Thought", the first virtual museum of its kind in Turkey. The site contains information on writers, artists, journalists and actors who have committed so-called "thought crimes" and have, as a result of their professional activities, received prison sentences, been tortured or gone into exile. At the click of a mouse, visitors can take a Turkish- or an English-language tour of the museum.

The idea for the project is fairly old, as the composer and human rights activist Sanar Yurdatapan, one of the project's initiators, explains. It goes back to 1995, when the writer Yasar Kemal published an article in Germany's "Spiegel" magazine describing Turkish military atrocities against the Kurds. "Out of solidarity, over 1,000 intellectuals contributed to a book of writings that was subsequently published and banned. In doing so, they were denouncing themselves," says Yurdatapan.

"That was when the idea came about, particularly on the initiative of Ali Nesin, the son of the writer Aziz Nesin. The plan was to exhibit banned works in part of the press museum run by the journalists' society in the Istanbul district of Cagaloglu." But the idea was never put into practice. A similar exhibition organised by lawyers in 1997 had to close soon after it opened for financial reasons.

A maze of prison cells, cemeteries and courtrooms 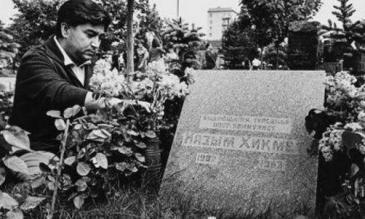 Humorous, critical, and a man who asked awkward questions: the renowned writer Aziz Nesin (1915–1995) wrote over 100 books, many of which were translated into 40 languages. Because of his critical attitude, he was in court on political charges over 200 times

About 15 years on, visitors can now follow the signs in the museum's virtual entrance area to the various sections: prison, exile and cemetery on the right, public prosecutor's office, cover-up and court on the left. Going straight ahead takes you to the rooms on literature, press and publications, visual and performing arts, faith and discrimination, science and social science, the library and a private room. There's also a guide to show visitors around. Next to the virtual elevator, you'll also find information on the Turkish constitution and legal system.

The project is still at a very early stage of its development. "The museum isn't nearly finished yet," says Yurdatapan. "That would take over 50 years." The idea is for it to grow through the involvement of the public, who are encouraged to submit documents to be archived in the virtual museum and made generally accessible.

"We've prepared the storeys and the corridors and symbolically opened a few rooms on every floor," explains Yurdatapan. "We invite everyone to send in documents that are worth exhibiting so that we can fill the museum together." The aim is to use a joint project to create a collective memory.

Yurdatapan feels that the Internet is a good platform for the project; the advantage of being on the web is that it is protected from vandalism. He's not afraid of the site being blocked or closed down by the state; experience has shown that there are ways of getting around that. Nor does he anticipate legal consequences. "We're used to cases like that anyway. If we were sentenced to a fine, we'd get double or three times the sum back through the European Court. We trust in our rights," says Yurdatapan.

Humour as a weapon against oppression

He is convinced that the museum not only provides important information, but also makes an emotional appeal to its visitors. The design of the rooms and the depiction of the people – for example those in the prison cells – have been kept in the tradition of Turkish comics and graphic novels. That's a deliberate choice.

"The abuses the museum documents are bad enough," says Yurdatapan, "so at least the outward appearance of the website ought to make a cheerful impression." Moreover, he adds, past experience has shown that humour is the best weapon against oppression. The fictional character Nasreddin Hoca has survived for centuries, he points out, because he once used his sense of humour against the ruler Timur. The writer Aziz Nesin was also made immortal by his humorous stories, says Yurdatapan, and the Gezi protests of summer 2013 used humour as a convincing weapon against police violence.

The project doesn't have a particular target group, he explains. "So-called 'thought crimes' aren't restricted to a certain age, gender, nation, religion or language." Yurdatapan is convinced that everyone will discover an alleged crime that they find particularly moving.

In the "absurd room" next to the elevator, for instance, is the story of a cow by the name of Gulsum. She unintentionally destroyed a bust of the founder of the Turkish republic, Mustafa Kemal Ataturk, in a village schoolyard in the province of Malatya. The Education Ministry carried out interrogations to find the culprit. Fearing punishment by the state prosecutors, the cow's owner sent her "into exile" to acquaintances in the next village. This true story, which visitors can read all about in the museum, was later made into a film.

According to composer and human rights activist Sanar Yurdatapan, one of the initiator's of the project, past experience has shown that humour is the best weapon against oppression

The project's long-term goal is to link the museum with others of its kind around the world, so that visitors can go from the room on the poet Nazim Hikmet, for example, to similar museums in Greece, Chile or France.

For well-informed visitors, the information currently available on the website is still rather sparse, yet it does provide a good overview of the lives and work of the alleged thought criminals. Let us hope that the project will benefit from the opportunities provided by the Internet and will in future be able to provide interested visitors with more, previously unavailable video and audio material.

Although the site's design is certainly a matter of taste, the virtual "Museum of Thought Crimes" is a long overdue project – also with a view to discussions in Turkey on the museumisationification of prisons and the Madimak Hotel in Sivas, where 37 mainly Alevi intellectuals died in an arson attack in 1993 – and an important step towards reflecting on recent Turkish history.

The Turkish government is hoping to split the opposition and put off voters by cracking down on pro-Kurdish politicians. But critics say the strategy won't work this time. By ... END_OF_DOCUMENT_TOKEN_TO_BE_REPLACED

Recently, Twitter has become something of a people's court for Turks seeking justice. Particularly in cases of violence against women and animal rights, social media is regarded ... END_OF_DOCUMENT_TOKEN_TO_BE_REPLACED

Now that he has converted Hagia Sophia back into a mosque, Turkey's president, Recep Tayyip Erdoğan is setting his sights on the Al-Aqsa Mosque in Jerusalem. Joseph Croitoru ... END_OF_DOCUMENT_TOKEN_TO_BE_REPLACED

Ronya Othmann's novel "Die Sommer" (The Summers) tells the story of Leyla – the daughter of a German and a Yazidi Kurd – who visits her grandparents' Yazidi village in northern ... END_OF_DOCUMENT_TOKEN_TO_BE_REPLACED

In the aftermath of the devastating explosions in Beirut, French President Emmanuel Macron is styling himself as Lebanon's saviour. Ultimately, however, the success of his efforts ... END_OF_DOCUMENT_TOKEN_TO_BE_REPLACED

Lacking support from Arab countries for its stance on the Kashmir dispute, Pakistan is looking for new alliances under China's leadership. How practical is it for Islamabad to ... END_OF_DOCUMENT_TOKEN_TO_BE_REPLACED
Author:
Ceyda Nurtsch
Date:
Mail:
Send via mail

END_OF_DOCUMENT_TOKEN_TO_BE_REPLACED
Social media
and networks
Subscribe to our
newsletter