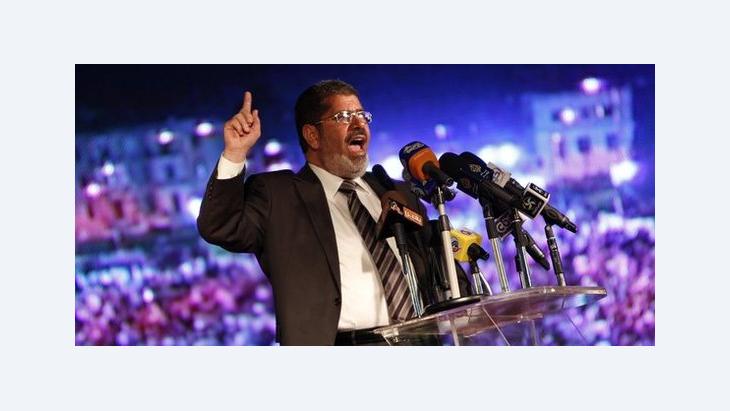 ﻿Mohammed Morsi is becoming Egypt's first democratically elected president under enormously difficult circumstances. He will have to find a way to cooperate with all political powers, says Loay Mudhoon

﻿There is no question that Mohammed Morsi's election – in spite of the many disputes along the way – represents a historic moment. For the first time in Egypt's modern history, a relatively democratic process led to the election of Morsi, a candidate of the Islamist and conservative Muslim Brotherhood party. As leader of the country of 80 million along the Nile, he becomes the first civilian to serve as president in a post-colonial Arab republic.

But this break with the past does not mean Morsi can expect a smooth transition to power. After 16 months of revolutionary dynamics in Egypt, the heart of the Arab world, deep divisions have emerged.

In with the new? 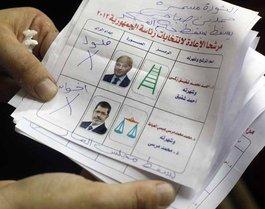 "There are a number of signs that the generals only allowed the Islamist Morsi to assume the presidency because of their fear of what might have happened in the streets if they issued a clearly manipulated run-off result," says Loay Mudhoon

​​The protestors' war of attrition and the legal interference by the military council in charge of the country led many everyday Egyptians to tire of the demonstrations and the country's instability.

That explains the surprisingly large amount of support for Ahmed Shafiq, a corrupt representative of the old regime whom Morsi beat by a small margin in the run-off.

Most Egyptians, and especially those who took part in revolutionary protests, got behind Morsi in recent weeks – but not out of support for the intransparent and ideologically driven Muslim Brotherhood. Instead, they sought a final break with the Mubarak system of entrenched state leadership.

At the military's mercy

Morsi's election was supposed to usher in the end of 60 years of the military's dominance in Egyptian politics. However, the future president will hardly have any power left after the generals pulled off a constitutional coup in which parliament was dissolved, and the generals appointed themselves budgetary and executive authority over the military as well as legislative control of the country generally.

It is an open secret that the ruling military council would have preferred Shafiq as president. With the former air force general, the privileged class around Field Marshal Tantawi would have been able to secure its social position much more easily.

Fear of the streets 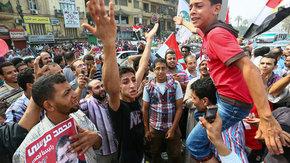 Mohammed Morsi must legitimate himself to the Tahrir Square movement if he wants to survive the showdown with the imperious military, says Loay Mudhoon

​​There are a number of signs that the generals only allowed the Islamist Morsi to assume the presidency because of their fear of what might have happened in the streets if they issued a clearly manipulated run-off result. They could have faced an immense and uncontrollable wave of riots. In recent days, many influential individuals and forces have made it clear to the authoritarian generals that the situation in the Arab world's most populous country is very serious.

Morsi, whose suitability for and approach to his country's highest office both merit some doubt, is now damned to cooperation with other political powers. In particular, he must legitimate himself to the Tahrir Square movement if he wants to survive the showdown with the imperious military. Overcoming the long-standing power struggle between the military and the Islamists will be of decisive importance for Egypt's future.

More importantly, Egyptians do not expect an "Islamist renaissance" from their democratically elected president. They are also not seeking glib solutions rooted in religion for Egypt's pressing social and economic problems. Instead, they want to see pragmatism.

The question about how to organize Egyptian society will determine the future of the country's democratic transformation.

Home
Print
Newsletter
More on this topic
The Parallel World of the Egyptian Military: An End to the Oasis for the PrivilegedEgypt after the Presidential Election: The Military Hands over Power ... to ItselfInterview with Bouthaina Kamel: ''The Revolution Is Not Over as Long as the Military Rules''
Related Topics
Arab Spring, Arabellion, Egypt Revolution 2011, Egypt's army, Mohammed Morsi, Muslim Brotherhood, Power struggle in Egypt
All Topics

Germany's foreign policy is explicitly values-based. But what happens, Ralf Bosen asks, when democracy, the rule of law and human rights collide with the logic of trade and ... END_OF_DOCUMENT_TOKEN_TO_BE_REPLACED

"The people aren’t ready for democracy" has been the constitutional basis for Arab tyranny, its favourite slogan and its sacred narrative for more than a century. Yet, asks Khaled ... END_OF_DOCUMENT_TOKEN_TO_BE_REPLACED

A new global database shows a significant gap in reported COVID-related deaths, suggesting the actual worldwide death toll is short by at least 1 million. That's due in part to ... END_OF_DOCUMENT_TOKEN_TO_BE_REPLACED

Two decades after the attacks of 11 September 2001, the West faces the shattered debris of its failure – not only in Afghanistan, but also in Iraq, Syria, Libya and Yemen. What ... END_OF_DOCUMENT_TOKEN_TO_BE_REPLACED

The coronavirus pandemic has turned lives upside down all over the world. In the Middle Ages, however, people lived with epidemics all the time. The best and most famous ... END_OF_DOCUMENT_TOKEN_TO_BE_REPLACED

In Ancient Egypt, the pharaohs had "solar boats" built to take them into the afterlife. One of these boats was discovered in 1954. It has now been moved to the Grand Egyptian ... END_OF_DOCUMENT_TOKEN_TO_BE_REPLACED
Author:
Loay Mudhoon
Date:
Mail:
Send via mail

END_OF_DOCUMENT_TOKEN_TO_BE_REPLACED
Social media
and networks
Subscribe to our
newsletter