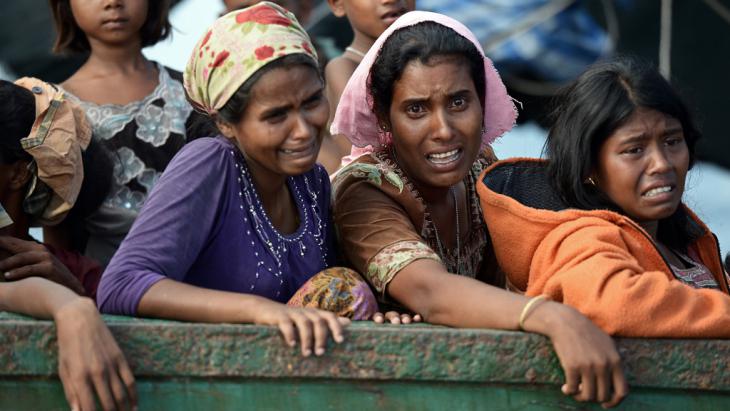 Mass graves in Thailand and overcrowded boats full of refugees in the Gulf of Bengal highlight the dramatic situation facing the Muslim Rohingya minority. According to Rodion Ebbighausen, this stream of refugees is not about to run dry any time soon

The refugee crisis in South-East Asia continues to worsen. Following the discovery of 30 graves with the corpses of suspected refugees in southern Thailand, Prime Minister Prayuth Chan-ocha has declared war on the human traffickers. He issued a statement pledging that tighter controls would be imposed on refugees' usual routes. The refugees, who belong to the group of Muslim Rohingyas, come from Bangladesh and Myanmar.

Tens of thousands of them regularly risk their lives making the dangerous sea crossing to southern Thailand. The destination of this busy refugee sea route is Malaysia, from where many aim to reach other places even further afield. Following the blockade of the trafficking route in Thailand, the smugglers are no longer able to bring refugees ashore there. This means the boats are forced to hold out on the high seas.

The International Organisation for Migration (IOM) in Bangkok believes that 8,000 people are currently out at sea in the Gulf of Bengal, some of them in unseaworthy vessels and without sufficient food and drinking water. The organisation says there is no rescue operation in the offing. Thailand, Malaysia and Indonesia are refusing to take on further refugees. A spokesman for the Malaysian government said on 12 May that help would only be provided if the boats were threatening to sink. More than 1,000 refugees have arrived in Malaysia since 10 May. They were so weak they needed medical attention. But because they are viewed as illegal immigrants, just as they are in the countries they travelled from, they were taken directly to an internment camp. 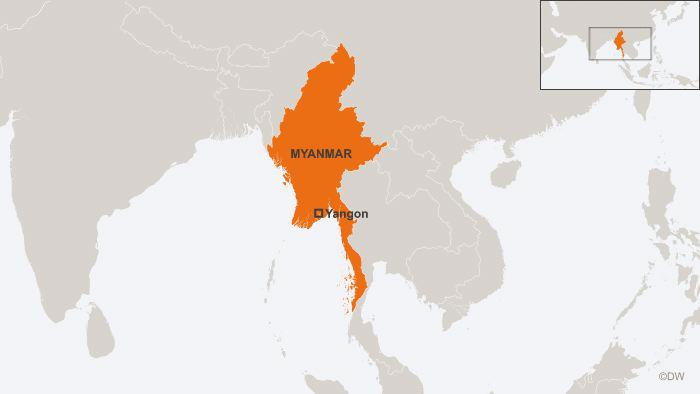 "The Rohingya are a Muslim minority in Buddhist Myanmar in South-East Asia. The group is thought to number around 810,000. British colonial rulers brought their ancestors from what is now Bangladesh more than 150 years ago. They settled in what is now the western state of Rakhine (also Rakhaing) on the Gulf of Bengal. The Myanmar authorities refuse to give them citizenship," writes Rodion Ebbighausen

Escape as the only way out

The latest events are just the tip of the iceberg. The Rohingya have been fleeing from Bangladesh and Myanmar for years. The UN High Commission for Refugees (UNHCR) says that in the year 2014, this group numbered at least 25,000 – a figure that has already doubled in the first three months of 2015.

The Rohingya are a Muslim minority in Buddhist Myanmar in South-East Asia. They are thought to number around 810,000. British colonial rulers brought their ancestors from what is today Bangladesh more than 150 years ago. They settled in what is now the western state of Rakhine (also Rakhaing) on the Gulf of Bengal. The Myanmar authorities refuse to give them citizenship.

In 2012, fierce clashes between Buddhists and Rohingya left almost 200 people dead; tens of thousands were displaced. To this day, the UNHCR says 140,000 Rohingya are living in camps. These are run by international aid organisations, but conditions are poor. There is a lack of basic supplies and amenities such as clean drinking water, sanitary facilities and appropriate accommodation. For many, escape is clearly the only way out.

To this day, the status of the Rohingya people remains an unresolved issue. For most of the population of Myanmar, the designation is a taboo. It is more usual to hear them referred to as "Bengalis" – an indication that members of this immigrant group originally came from neighbouring Bangladesh. The government of Myanmar does not recognise them as an ethnic minority. Bangladesh, on the other hand, points out that the Rohingya people have been living in Myanmar for generations, and says it is not obliged to act. Both countries are passing the buck from one side to the other.

This is having far-reaching consequences: the Rohingya are not allowed to vote in Myanmar, they only have limited access to the country’s health and education systems and they are not free to travel. The United Nations describes them as one of the most persecuted groups in the world. 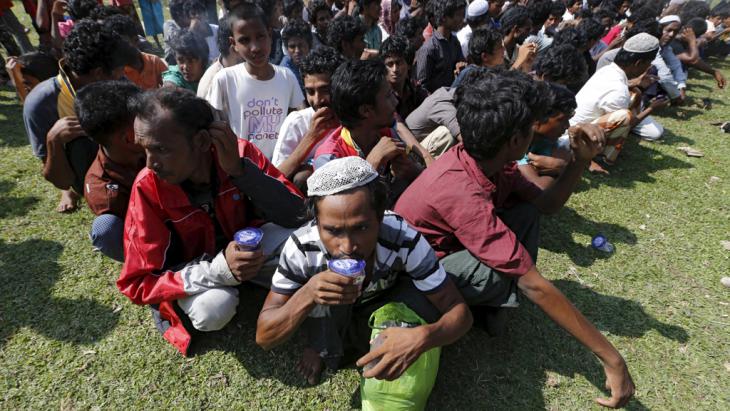 Rohingya migrants who arrived by boat, queue up for identification at a temporary shelter in the port of Julok village in Kuta Binje, Indonesia's Aceh Province, 20 May 2015. According to an Indonesian search and rescue official, hundreds of Rohingya and Bangladeshi migrants landed in Indonesia's north-western Aceh province early on 20 May

In 2012, the President of Myanmar Thein Sein set up a commission of enquiry into the unrest in Rakhine State. The commission's extensive report of April 2013 reaches the conclusion that conflict parties are neither ready nor willing to co-exist peacefully. To date, nothing has changed.

Radical nationalist monks from Myanmar such as Wimala and Wirathu, who was described by  "The Economist" as a "notorious chauvinist", write defamatory anti-Muslim pamphlets. They call for a boycott of Muslim shops and businesses and say interfaith marriage should be banned. In January 2015, Wirathu insulted the UN's Special Rapporteur on Myanmar, Yanghee Lee, sent to build a picture of the situation of Muslims among other things, as a "whore".

The government and opposition led by Aung San Suu Kyi are sidestepping the issue, in particular during the run-up to parliamentary elections scheduled for November 2015. The political world knows only too well that most voters in Myanmar are against the Rohingya.

Positions remain entrenched. An imminent appeasement of the situation is unlikely, as the historian and UN adviser Jacques Leider says: "It will remain a chronic problem for many years." As far as this refugee crisis is concerned, there would appear to be no end in sight.

Indonesia has become a primary battleground between democratic and autocratic visions of Islam in the 21st century, with Nahdlatul Ulama pitted against Abdullah bin Bayyah, a ... END_OF_DOCUMENT_TOKEN_TO_BE_REPLACED

Research project "The Global Qur'an", brainchild of Professor of Islamic Studies Johanna Pink and sponsored by the European Research Council, analyses the history and ... END_OF_DOCUMENT_TOKEN_TO_BE_REPLACED

At a time when even some rich democracies are electing con men as their political leaders, the success of Indonesian President Joko Widodo deserves wider acclaim and appreciation ... END_OF_DOCUMENT_TOKEN_TO_BE_REPLACED

On the Indonesian island of Java, one librarian has started a mobile library, lending books to children in exchange for plastic rubbish. The idea is that they will learn to take ... END_OF_DOCUMENT_TOKEN_TO_BE_REPLACED

END_OF_DOCUMENT_TOKEN_TO_BE_REPLACED
Social media
and networks
Subscribe to our
newsletter