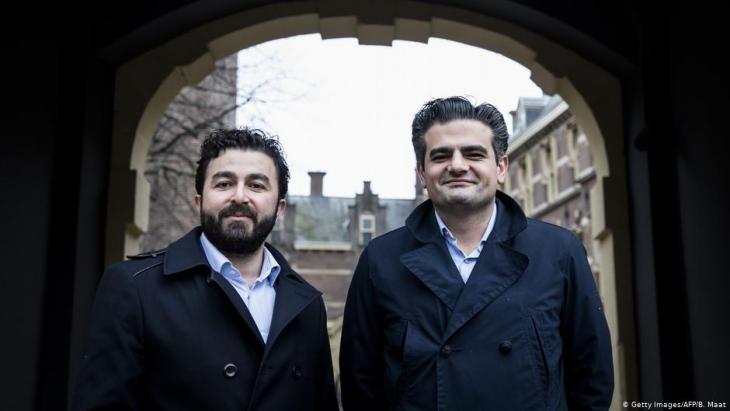 On the other hand, Kuzu and Ozturk, both born in Turkey, were aware of the huge potential of the "migrant vote" during this time of turmoil – Wilders was making massive gains, Mark Rutteʹs liberal VVD was embracing anti-migrant rhetoric, while other left-wing parties abandoned internationalism to focus on mainstream Dutch voters.

Instead of resigning from the Tweede Kamer, the Dutch lower house, the two MPs founded their own party, naming it "Denk"– a word that means "think" in Dutch and "equal" in Turkish – to mark its roots in the migrant community. They cast their movement as anti-racist, multi-ethnic, and anti-colonial, presenting a programme with a strong left-leaning stance, outspoken against "white privilege" and institutionalised racism in the Netherlands.

Many academics, such as Floris Vermeulen of the University of Amsterdam and an expert on the "migrant parties" phenomenon, see Denk as a direct consequence of the crisis of the traditional parties and the rise of populists movements such as Wildersʹ Partij voor de Vrijheid (Party for Freedom) and Baudetʹs FvD.

At the March 2017 general elections, Denk became the first migrant party in Europe ever to see representatives elected to a national parliament. Kuzu and Ozturk were returned as MPs and were joined by Farid Karzan, born in Morocco. Denkʹs three MPs have since piqued the national and even international interest. The reaction of mainstream politics and the national press has been, in general, negative.

Wilders has accused the party of being "agents" of Turkish President Erdogan because of rumours that the party receives active support from the Diyanet, a powerful Turkish state agency responsible for administering Turkish-Muslim religious communities in Europe. The Telegraaf, the main national paper, has labelled Denk a "product of failed integration".

Yet the Netherlandsʹ so-called "Turkish party" does not merely appeal to "Nederturks" (and, indeed, is rejected by Dutch-Kurds and anti-Erdogan Dutch-Turkish). It has also attracted support from a large share of the Dutch-Moroccan community and many native Dutch disaffected with mainstream politics. But it also underlines the radical transformation that the Netherlands – once considered a global example of diversity and cultural cohabitation – has undergone.

Now in its fifth year, Denk is one of the most successful examples of a "migranten partij", with a permanent national structure and elected representatives in several provinces and every city with a substantial minority population. But it is not the only one in the Netherlands to represent Dutch citizens with a migrant background. Big cities such as Amsterdam, Rotterdam and Den Haag all have local minority parties, mostly representing the fragmented and complex Muslim communities.

In Rotterdam, a former Green-left (Groenlinks) councilman with Egyptian roots, Nourdin El Ouali, founded "Nida", which in Arabic means "vote" and "unity". The party, a Muslim-inspired movement with a progressive stance on social issues and LGBTIQ-friendly positions, has been represented in the local council since 2014. This unusual combination has seen Nida gain much support among younger generations with a migrant background; Nida has also seen a representative elected to the Den Haag City Council.

In the "city of peace and justice", as the de facto capital has labelled itself because of the international tribunals it hosts, political fragmentation is so far advanced that three parties with an agenda for Muslim voters are competing: Nida, the Party of Unity (Partij van de Eenheid) and the Muslim Democrats (Islam Democraten). The three each hold a seat in the council and often represent the interests of different mosques and Islamic cultural centres.

In Amsterdam, where Denk attracts virtually all Muslim votes, yet another "migrants party" has appeared on the scene, this one representing the black community. Bij1, an explicitly feminist party, gained one seat at the last municipal elections. It was founded by Sylvana Simons, a Dutch-Surinamese TV actor, with a programme focused on de-colonisation and the rights of the black community, especially women.

For many, the rise of the "migrantenpartijen" is a worrying signal. As non-western minorities represent 13% of the population in The Netherlands, the main risk is that a relevant part of the country will become more marginalised from mainstream society. Nevertheless, by relying on activism and identity, the migrant parties have managed to mobilise people who have never been involved in politics before. They have directly challenged the concept of "integration" – calling it out as a neo-colonial tool of the native-born to force assimilation – and replaced it with the idea of "acceptance".

Denk is the trailblazer. If its position in recent opinion polls holds up, it seems likely to fulfil its ambition of becoming the first migrant party ever to gain a seat in the European parliament.

Research project "The Global Qur'an", brainchild of Professor of Islamic Studies Johanna Pink and sponsored by the European Research Council, analyses the history and ... END_OF_DOCUMENT_TOKEN_TO_BE_REPLACED

As the Western world emerges from a holiday season made less festive by COVID-19, millions of children in Afghanistan are starting 2022 facing the prospect of famine, illness, and ... END_OF_DOCUMENT_TOKEN_TO_BE_REPLACED

A wedding extravaganza of bright colours, flowers, feasting and dancing, yet the bride, Nefie Eminkova, who comes from Bulgaria's Pomak – Muslim – minority, can see none of it. ... END_OF_DOCUMENT_TOKEN_TO_BE_REPLACED

Every year in December, the team at Qantara.de takes a look back at the articles that proved most popular with our readers. This year is no different. Here is a run-down of the ... END_OF_DOCUMENT_TOKEN_TO_BE_REPLACED

Jesus – Issa in Arabic – doesn’t merely enjoy the highest place among the prophets in the Koran. He is also revered in Islam’s mystical tradition for his message of love and mercy ... END_OF_DOCUMENT_TOKEN_TO_BE_REPLACED

The military in Sudan has never waged war against a neighbour, but it has already staged 17 coups. Tens of thousands of people are risking their lives to oust the military by ... END_OF_DOCUMENT_TOKEN_TO_BE_REPLACED
Author:
Massimiliano Sfregola
Date:
Mail:
Send via mail

END_OF_DOCUMENT_TOKEN_TO_BE_REPLACED
Social media
and networks
Subscribe to our
newsletter