Skip to main content
The Nuclear Conflict with Iran

In the mounting dispute with the West over its nuclear program, Iranian foreign policy has taken some confusing and contradictory twists and turns. Bahman Nirumand takes a look behind the scenes

Ali Larijani has a reputation as a hardliner and one of the most radical proponents of the Iranian nuclear program, yet he came across as surprisingly moderate. "You have nothing to worry about," he reassured leading representatives of countries from around the world at the event.

Larijani said that Iran was threatening neither Israel nor Europe, and his country did not support terrorists. He maintained that any doubts about Iran's peaceful intentions were totally unfounded.

Larijani assured that Tehran was prepared to cooperate with the UN Security Council. "We need negotiations and mutual respect," he said. And he declared that Tehran would accept limits to its uranium enrichment program, the first time ever that an official representative of the Islamic Republic made such a statement.

For the sake of world peace

One day before Larijani's appearance in Munich, Tehran had installed additional surveillance cameras in the controversial Natanz uranium enrichment facility. According to a statement released by the Iranian nuclear agency, all cameras required by the International Atomic Energy Agency (IAEA) have now been installed. This will allow the IAEA to continually monitor the facility.

Larijani referred to this move and explained that Iran would resolve all disagreements with the Vienna-based nuclear watchdog within the next three weeks. IAEA Director General Mohamed ElBaradei said there were no indications that Iran intended to build a nuclear bomb, but he criticized the government in Tehran for concealing parts of its program and not answering all questions.

A "humiliation" for the Islamic Republic

While Larijani was making his speech in Munich, a distinctly different message could be heard in Tehran. At a rally commemorating the 28th anniversary of the Islamic Revolution, Iranian President Mahmoud Ahmadinejad again rejected UN Security Council demands to suspend its uranium enrichment activities. 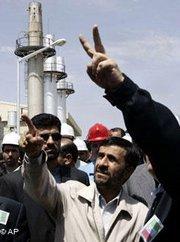 ​​The president said that suspending nuclear activities would be a "humiliation" for the Islamic Republic of Iran. While the crowd chanted "death to America" and "nuclear power is our right", Ahmadinejad told his audience that the Iranian nation was determined "to continue its nuclear activities within the agreements and regulations of the International Atomic Energy Agency."

He said that his country was prepared to negotiate at any time, but rejected all preconditions. Ahmadinejad said that Iran would stand "like a rock" and insist on its right to peacefully use nuclear power and not allow itself to be intimidated by sanctions passed by the UN Security Council or threats from the USA.

Notwithstanding the military activities of the USA in the Persian Gulf, which many observers interpret as a sign of imminent attacks on Iran's nuclear facilities and military bases, Ahmadinejad announced a new stage of uranium enrichment.

The president said that a declaration to this effect would be made on April 9th. On April 9th last year, he announced the "joyful news" to the Iranian people that the uranium enrichment program had reached a new stage, which allowed Iran to join the exclusive club of nuclear powers. It is anticipated that he will announce that the number of centrifuges at Natanz will be increased from the current 165 to 3,000.

To add to the confusion, a day after Ahmadinejad's speech, a spokesman for the Iranian Foreign Ministry told the press: "Iran is prepared to negotiate on everything, including the suspension of uranium enrichment."

These contradictions among high-level Iranian leaders have sparked widespread speculation. It is a well-known fact that Ahmadinejad's radical foreign policies, his uncompromising stance in the nuclear dispute, his attacks on the USA and Israel, and his policies with regard to Iraq, Lebanon and Palestine are not only rejected by reformers, but also highly controversial among moderate conservatives.

​​In this political climate of mounting tensions between various opposing factions, fueled in part by the domestic political failures of the government and its inability to keep election promises, the position taken by Iran's supreme leader, Ayatollah Ali Khamenei, plays a decisive role.

Khamenei has so far verbally tried to back Ahmadinejad. However, recently he appears to be distancing himself from the president. The fact alone that he did not consult with the government before sending his foreign policy advisor, former Foreign Minister Ali Akbar Velayati, to conduct nuclear negotiations with the Russians in Moscow, shows that he wants to rein in the head of the government.

Khamenei is under pressure from experienced and now more pragmatic politicians, like former President Hashemi Rafsanjani, who warn of outside dangers and call for a more cautious approach to foreign policy. Also the fact that Larijani, who has toned down his rhetoric, was allowed to travel to Munich after all, indicates that Khamenei has yielded to pressure from the Grey Eminences.

Larijani had first accepted the invitation to take part in the security conference, and then cancelled, allegedly due to health problems. This back-and-forth could also be interpreted as a continuation of the same old game of cat and mouse that the cunning mullahs have been playing for some time now with their European negotiating partners.

This might explain why EU foreign ministers decided at their meeting, one day after the Munich security conference, to strictly implement the UN Security Council sanctions against Iran that were passed on December 23rd. At the same time, to avoid offending Tehran, they stressed that the EU will continue to pursue a diplomatic solution, and Europe remains ready to negotiate with the Iranians. German Foreign Minister Frank-Walter Steinmeier said that it was up to Iran to make it possible to return to the negotiating table.

An embarrassment was recently added to this two-pronged, carrot-and-stick policy with Iran. Following the meeting of the foreign ministers, an internal report by EU foreign policy chief Javier Solana was made public. In this document, published by the German edition of the Financial Times, Solana writes: "We have to assume that Iran will one day be capable of enriching uranium to the grade required for an arms program."

Solana states that the problem with Iran cannot be solved through economic sanctions alone. He maintains that technical difficulties alone have delayed the Iranian nuclear program – and not measures such as the resolutions of the UN Security Council or the International Atomic Energy Agency.

Hardliners will view this document as proof that Iran has nothing to fear and can pursue its nuclear program without making concessions, while moderates will see this as an indication that the USA and the EU will indeed make use of military options.

On February 23rd, the deadline set by the UN Security Council will expire. Until then, we will see which fraction in Iran has its way, the hardliners or the moderates.

Dispute over Iran's Nuclear Programme
Compromise-Free Politics
Sanctions or military intervention would achieve exactly the opposite of what they are allegedly being used to achieve. Instead of isolating the regime, Iranian civil society would be split right down the middle, writes Bahman Nirumand

Commentary Navid Kermani
"This Rogue Is No Rogue – Because He's My Rogue"
It would be a disaster for Iran if Europe's policy of reconciliation with Tehran were to succeed, according to German-Iranian journalist and Islam expert Navid Kermani

END_OF_DOCUMENT_TOKEN_TO_BE_REPLACED
Social media
and networks
Subscribe to our
newsletter