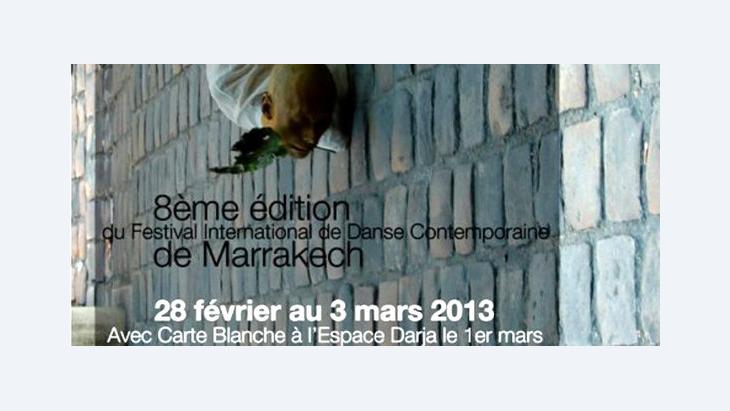 The ''On Marche'' Festival in Marrakesh

The Ethic of Dance Is a Shock for Many

﻿The eighth contemporary dance festival "On Marche" is taking place in Marrakesh this year. In spite of the fact that there is still considerable resistance to the idea of dance, the festival still manages to turn public places into open stages which are enthusiastically received by the public. By Astrid Kaminski

In front of Bab Doukala, one of the nine city gates of the Marrakesh medina, a young woman is drawing a heart of chalk with slow concentration on the old cobble-stones. Bits of old food, broken bottles, donkey shit, urine and motor oil have all left their mark on the square which leads from the city gate to the bus station. Half out of their minds, glue sniffers hang out around a palm tree, while their dealer unashamedly mixes his wares in two big plastic bottles. There are subway stations in Berlin which look a bit like this, and it doesn't seem like a place which might be chosen by anyone who had anywhere else to go.

But the people of Marrakesh have a good sense of where something interesting is about to happen. It takes only a few moments for a crowd to form around the young woman who is bringing some heart to the square. It's the beginning of an open-air performance of the Belgian collective IN EXTREMIS and it marks the start of the eighth "On Marche" festival.

It's the only Moroccan festival of contemporary dance, and the festival makes Marrakesh one of the most important places in the so-called Arab world for the dance scene, along with Beirut and Tunis. 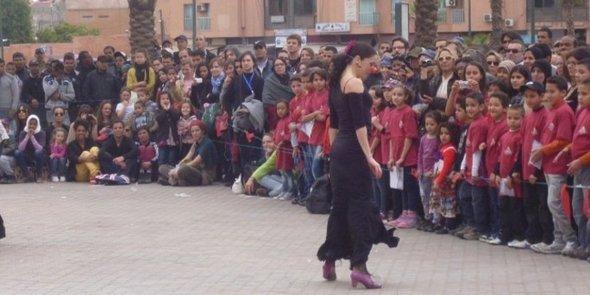 Dynamism and utopia: In the Marche performance, the artists form a kind of elastic band of bodies as they take an hour to cross the square in a slowly intensifying forward movement

The revolutions have not made it easier for this art form in conservative Muslim cultures. Someone sitting beside me in the plane – a student of engineering – confirms the usual prejudices: "A professional male dancer is probably gay, and a women dancer is anyway probably not a woman of honour."

In other words, only little by little can one negotiate between the ethics of dance and the ethics of religion. That's evident in the discussions which take place at the festival: as well as criticism of the cosmopolitanism and institutional freedom of dance, there are also attacks from a religious point of view.

When he started his training, the people in his neighbourhood attacked the Tunisian dancer Hafiz Dhaou with belts for being "queer". Meryam Jazouli, who runs a dance workshop in Casablanca, says he has to put a lot of effort into winning over the families of girls who are interested in dancing.

That problem is reflected in the small number of women performing among the dancers from the region – there are only two altogether. Their solos are all the more insistent: in the small space they have, their performances vary between intimate whispering and loud singing, which reaches beyond the space with the volume typical of a muezzin. The references to folk-dance, which paradoxically still has a high status in Morocco, are immediately understood by the public.

So it's a good move by the head of the festival, Taoufiq Izeddiou, to link dance to the small space it possesses within the religious tradition.

The centre of the four-day festival is the annual "Marche" in which all the artists involved take part, together with traditional Dakka l'Marakchia musicians. It takes place on a square with normally few pedestrians, off the busy Rue Mohamed V. But here too, a huge crowd gathers as soon as the event gets under way.

The festival's title, "On Marche", exploits the ambiguity between "We Move", "We Stride", and "We Progress". In the Marche, the artists form a kind of elastic band of bodies as they take an hour to cross the square in a slowly intensifying forward movement. At one particularly beautiful moment, Izeddiou lifts his colleague from Casablanca in a magical slow-motion movement, as if she were weightless in the changing winter sky. It's a little utopia which remains in the mind as an image long after he has let her down again.

﻿The audience's attention and stamina

But, in spite of such immediate impressions, the event cannot be taken in with a quick glance; it requires attention and stamina from its audience. And in Marrakesh, the rule seems to be: anyone who stops to look, stays. Even if the protest movement of the 20th February – as the Moroccan branch of the Arab Spring is known – can't be compared with those of other countries, one can get an impression of that movement's dynamism from the readiness of passers-by to join in.

All the same, the people of Marrakesh are a particularly experienced and hard-nosed public: the city boasts the world-famous storytellers' market-place, the central Djemaa el Fna square, which is surrounded by legend and has been a UNESCO Masterpiece of the Oral and Intangible Heritage of Humanity since 2001. Their experience of listening and looking gives them a great advantage when it comes to the development of their own abilities.

There's evidence of that among the children of a normal primary school – after a week of rehearsals with the French choreographer Bernardo Montet and the musician Dgiz, they are ready to show a curious public their witty and dynamic capabilities.

﻿No support from the Moroccan side

The evening events in the stylish Institut Français and in the even more stylish film school – both attractive modern buildings with traditional elements – are, like everything, free to the public, mainly thanks to French and Belgian partners and co-sponsors. Even after eight years, there is still no support from the Moroccan side.

But it would anyway be more interesting if the festival could manage to make itself independent of state financing, so that it could give up the anachronistic model of an illusory artistic freedom. It is of course legitimate to take advantage of European tax money and post-colonial guilt feelings, but that doesn't justify our somewhat primitive economic structures with their questionable consequences for human rights and their aggressive export policies.

Decades after the first French nuclear test in Algeria, thousands of victims are still waiting for compensation. To date only 51 claims have been filed under French legislation ... END_OF_DOCUMENT_TOKEN_TO_BE_REPLACED

Many predominantly Muslim countries have penal laws against "blasphemy", "defamation of religion" and "apostasy". In practice they serve as highly effective weapons to settle ... END_OF_DOCUMENT_TOKEN_TO_BE_REPLACED

Few would have thought that Algeria's Hirak protest movement would still be mobilising the masses 12 months on from its first peaceful demonstration. According to Isabelle ... END_OF_DOCUMENT_TOKEN_TO_BE_REPLACED

Having seen a sharp decline in its influence in Tunisia and Algeria, France is eyeing China and Spain’s growing economic presence in Morocco with concern. Is Paris about to lose ... END_OF_DOCUMENT_TOKEN_TO_BE_REPLACED

At the suggestion of his Arab students, Israeli psychologist Ofer Grosbard created the project "Quranet", which uses texts from the Koran to solve educational problems in schools ... END_OF_DOCUMENT_TOKEN_TO_BE_REPLACED

Libyans have mixed feelings about the EU. On the one hand, they admire what Europeans have achieved, but on the other, they feel let down. Moutaz and Walid Ali report from Tripoli END_OF_DOCUMENT_TOKEN_TO_BE_REPLACED
Author:
Astrid Kaminski
Date:
Mail:
Send via mail

END_OF_DOCUMENT_TOKEN_TO_BE_REPLACED
Social media
and networks
Subscribe to our
newsletter