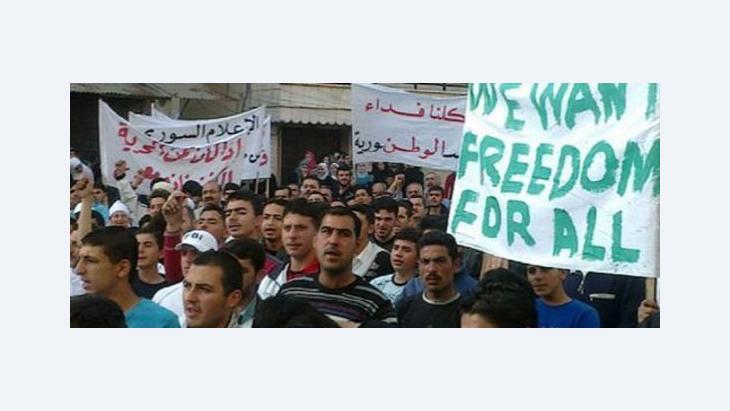 A Multitude of Uprisings

As the protests and demonstrations against the Assad regime in Syria continue to grow, the question of who it is that is behind them is one that is becoming more pressing. Radwan Ziadeh, founder and director of the "Damascus Center for Human Rights Studies" and "Damascus Spring" activist, provides some answers

First of all, it needs to be understood that what we are witnessing is Syria is a popular uprising. There is no single leadership at its head, nor is there any particular ideology behind it. In this respect, it is a situation that has more in common with what happened in Tunisia than with events in Egypt, where youth movements such as the April 6th Movement or the "We are all Khaled Said" group played a central role in deciding the day on which demonstrations against President Mubarak began – the Police Day national holiday on January 25th.

In Syria, on the other hand, the stranglehold that the security forces had on the country made it impossible to have any kind of success in organising a popular movement, even in secret. That is why we witnessed such a spontaneous uprising almost everywhere, with people going out onto the streets of the cities without anything having been organised or prepared. The choice of slogans was also spontaneous, even if the emphasis was on freedom and dignity, as these are undoubtedly the most important central issues of the Syrian revolution given the contemptuous way that the Syrian police state treats its citizens.

As the protests increased and the demonstrations grew in strength week by week, the demands and slogans became increasingly bolder, until they finally coalesced under the slogan that has swept across the Arab world from Tunisia to Egypt and helped bring about the overthrow of two of its most repressive regimes. After that, it was only natural that local leaders with the ability to organise the demonstrations, as well as their accompanying slogans, would emerge from the individual cities.

These local leaders played a central role in the intensification of the protests and although they have largely remained local and not yet succeeded in turning themselves into a nationally organised group, something that will require time after all, the demonstrations that are now being organised on a national level suggest that some coordination is beginning to emerge. 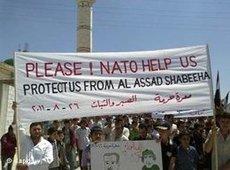 S.O.S to the international community: Supporters of the Syrian protest movement are openly demanding an end to the violence perpetrated by the brutal, pro-Assad, Shabeeha militia and calling for military intervention by the West

​​There is no doubt that the mosques, particularly those in the centres of the major cities, played a crucial role in events. The Syrian emergency laws, which have now been in place for more than 47 years, not only ended demonstrations and gatherings, but also the tradition which required the young to take to the streets and demonstrate for their rights. We are thus dealing with exactly the same sort of situation as that with which we are familiar from Latin America where the Church took on a key role in leading the protests against the military regimes, a phenomenon known as 'liberation theology'.

It is a fact that none of the local leaders is a member of any of the traditional political-ideological parties. It may well be the case that they are even anxious not to belong to such parties or even to discuss with the leaders of such parties the kind of things that they and their movements no longer find attractive.

There are three main divisions or groups within the current Syrian opposition all of whom have had a major influence on the development of the present protests.

Firstly, the traditional opposition consists of the traditional parties which have either turned their backs on the ruling National Progressive Front, formed in 1972, or did not join it in the first place. Formed in 1983 as the National Democratic Rally, it includes the Socialist Union Party, the Democratic People's Party, the Revolutionary Workers' Party and the Socialist Arab Baath Party. 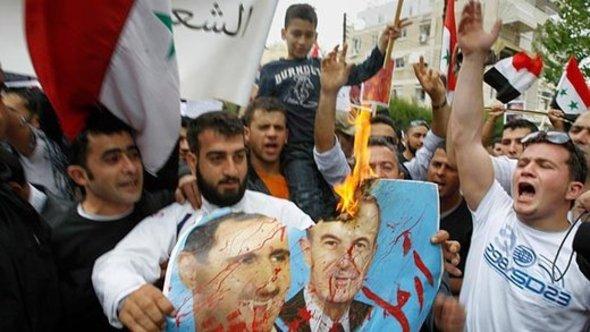 'Chaos advantage': "It is precisely due to the lack of an established leadership that the regime has not been able to suppress the protest movement through the arrest of its leaders," writes Radwan Ziadeh

​​It is striking that it is the nationalist and left-wing tendencies that dominate in all the political parties united in this movement.

Then there is the Muslim Brotherhood; it is also part of the traditional opposition. In the 1980s it engaged in armed struggle with the Syrian authorities, a conflict that cost the lives of tens of thousands and led to more than 100,000 arrests in the 1980s and 90s as the protests were being put down. At least 17 people are still missing to this day and their relatives have no idea what happened to them. The Syrian authorities answer was to pass Law 49 making membership of the Muslim Brotherhood a capital offence.

The Brotherhood is no longer an active force in Syria, though it does enjoy a certain amount of sympathy due to the massive oppression and persecution to which it was subjected. The Muslim Brotherhood’s influence on current events is minimal, a situation that their decision to support the protests in Syria has not changed.

After 2005 the Syrian opposition succeeded in taking a further step towards integration, in that year becoming signatories to the Damascus Declaration for Democratic National Change, a document which has brought together various opposition groups and a number of independent figures. Even the Syrian Muslim Brotherhood declared their support for the document from outside the country and became signatories to it. 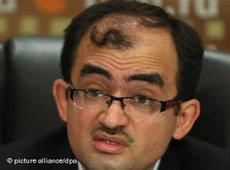 Radwan Ziadeh has lectured in Harvard, Columbia and Stanford University, among others, he is a also frequent political commentator on international media outlets such as Al-Jazeera, Al-Arabiya, and the B.B.C. Ziadeh also writes a bi-monthly op-ed for the leading Arab daily, Al-Hayat

​​But all of these traditional opposition prties played only a secondary role, not only among those who led the demonstrations, but also in the preparation of propaganda. The traditional opposition parties did not provide the leadership necessary to direct the demonstrations and increase the pressure on the regime in order to bring about its collapse and make the transition to democracy possible, as all their policy documents of recent decades have demanded.

It should, in fairness, be pointed out that some of the opposition leaders have, albeit belatedly, taken over a leading role at local level in the directing of the demonstrations. The Socialist Union Party, for example, put its weight behind the demonstrations in Douma near Damascus and contributed to achieving a turnout of over 50,000 demonstrators.

In this connection it must also be acknowledged that, thanks to their long years of political experience, the members of the traditional opposition do possess the necessary political tools to equip them to negotiate any upcoming transition. This may be one of the reasons why the Syrian security forces arrested the entire opposition leadership, in spite of the fact that they were very well aware of the limited role they had played in the demonstrations. What they wanted was to ensure that these people would not be successful in their search for a reasonable and appropriate alternative.

For the regime it is crucial that it continues to hold onto the reins of power even as it issues dire warnings of the chaos that will ensue, they maintain, as the only alternative to their rule.

The second opposition group are the local leaders, a new breed of leader that has emerged during the course of these demonstrations. They command the respect of the people in their towns and cities and have already demonstrated their leadership skills in organising and direction the demonstrations. At the same time, in spite of the difficult conditions under which they live, they have been able to resolutely stand up to the regime and by doing so have attracted many more people to join them. 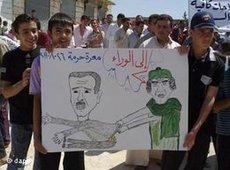 Just a drop in the ocean? The EU has threatened to impose an oil embargo on the Syrian regime as well as further tightening sanctions. It is doubtful whether this is enough to really help the Syrian opposition in the country

​​These local leaders are all members of the highly educated middle class, but most have been either arrested or forced into hiding for fear of arrest, something which complicates their task. As I said, however, it is precisely due to this lack of an established leadership that the regime has not been able to suppress the protest movement through the arrest of its leaders. New leaders emerge on an almost daily basis, ready to rally the people and to lead the demonstrations.

The third type of opposition group to distinguish itself during the unrest is that of the human rights and Internet activists with their excellent and rare skills in recognising and exposing human rights violations and passing their information on to the international human rights organisations.

Last but not least, there is the part played by the Syrian opposition abroad. The rise of the insurgency has brought them closer to the situation in the country where they have now taken over the crucial task of giving the Syrians a voice via the foreign media. This move is absolutely crucial, since no journalists are permitted to enter any of the country’s cities at the present time.

This branch of the opposition is increasing the international pressure on the regime through political channels. They have also been able to gain information on the plight of members of the opposition still in the country, with the majority of their leaders either in custody or subject to a travel ban. What will become of all the efforts of the various opposition movements remains to be seen.

Radwan Ziadeh is founder and director of the Damascus Center for Human Rights Studies. In 2001, he was one of the activists of the “Damascus Spring” who demanded an end to one-party rule. He has been a lecturer and researcher in political science in Washington since 2007. Currently he is unable to return to Syria where there is a warrant out for his arrest.

Lebanese cartoonist Bernard Hage has made a name for himself in a very short space of time, both at home and abroad. Now he sees no future for himself in Lebanon, and is about to ... END_OF_DOCUMENT_TOKEN_TO_BE_REPLACED

A new survey by Arab Barometer adds numbers to the narrative that COVID has led to a harsher reality for women in the Middle East and North Africa. By Jennifer Holleis and Razan ... END_OF_DOCUMENT_TOKEN_TO_BE_REPLACED

The young activists from the Minteshreen movement want to provide an alternative to the political corruption of the elites. For them, the state is more important than religion. By ... END_OF_DOCUMENT_TOKEN_TO_BE_REPLACED

They’ve already got the Louvre; they’ll soon have a Guggenheim Museum as well – and now the Emirates have added literature to their quest for cultural supremacy in the Arab world ... END_OF_DOCUMENT_TOKEN_TO_BE_REPLACED

The rollout of coronavirus vaccines in the Middle East and North Africa is already taking place on a massive scale, with the United Arab Emirates leading the way. Nevertheless, ... END_OF_DOCUMENT_TOKEN_TO_BE_REPLACED
Author:
Radwan Ziadeh
Date:
Mail:
Send via mail

END_OF_DOCUMENT_TOKEN_TO_BE_REPLACED
Social media
and networks
Subscribe to our
newsletter