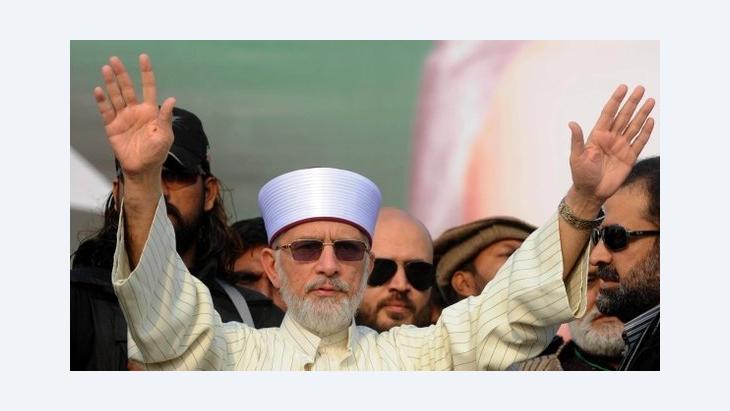 ﻿His call for a "million man march" in favour of reforms and against corruption has propelled cleric Tahir ul-Qadri to the status of champion of Pakistan's middle classes. Although the protest in Islamabad apparently achieved little, it casts a spotlight on the population's growing displeasure and its dwindling faith in Pakistan's mainstream political parties. By Marcus Michaelsen

﻿Was that it then? This will be question on the lips of those who took defied the cold to take part in a protest lasting several days in mid-January in the Pakistani capital, to demonstrate against corruption and to call for the government to be dissolved. Tens of thousands of people followed a call by religious cleric Tahir ul-Qadri who, in an allusion to the Egyptian revolution, had promised them their very own Tahrir Square.

But many more Pakistanis will be asking themselves a different question, namely: What was that? Having just recently returned to Pakistan from abroad, Qadri launched a huge media campaign and succeeded in mobilising a considerable following. It is still not known who exactly was pulling the strings, or how these activities were being financed. And as quickly as he convened the protest, Qadri ended it with an agreement with the government that appeared to fall well short of his original demands.

A fatwa against terrorism

The 61-year-old cleric represents a branch of Sunni Islam widespread in Pakistan and influenced by Sufism. It stands in contrast to the rigorous interpretation of Islam propagated by Saudi Arabia that often determines the headlines at home and reports about Pakistan in foreign media. He has been living in Canada since 2006, and heads an organisation for interfaith dialogue and education. Qadri also came to attention of western media in March 2010, when he issued a fatwa against terrorism. 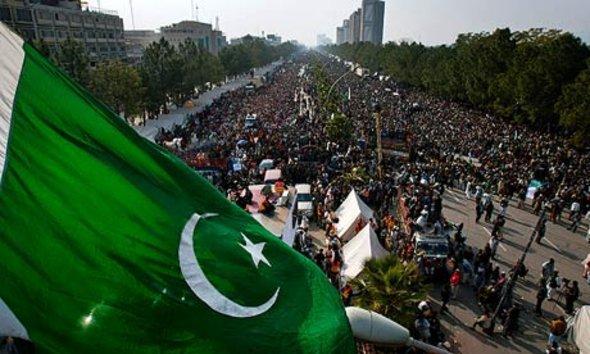 Rebellion against Pakistan's authoritarian rulers or staged "revolution"? – Although ul-Qadri failed to draw a million demonstrators out onto the streets as promised, this was one of the largest rallies to be held in Islamabad for decades

​​In his political campaign, the talented orator attacked what he described as rampant corruption and tax evasion among Pakistan's politicians. Qadri demanded immediate new elections as well as strict vetting of all candidates ahead of any poll. His demands were well-received: A demonstration in Lahore on 23 December brought several hundred thousand people out onto the streets. Although a million people did not come to Islamabad as promised, this was the largest rally to be convened in the capital for decades.

The population holds the current government of President Asif Zardari primarily responsible for the nation's desolate situation: inflation, rising food prices, daily power cuts and gas shortages. Not to mention violence against religious and ethnic minorities as well as the ongoing campaign of militant Islamists in the Afghan-Pakistani border region. According to a survey conducted in May 2012 by the Washington-based Pew Research Centre, only 24 percent of those Pakistanis polled delivered a positive assessment of the government's role.

The problematic aspect of Qadri's key demand was that elections are in any case due to be held this year. Once the exact date as been set, the constitution demands that the government must be dissolved in advance of the poll and a transitional government formed that is acceptable to all sides. Despite its poor track record, Zardari's government, which was elected in 2008, would be the first in Pakistan's 65-year history to end its term with a regular poll.

The nation's powerful military has repeatedly either directly ousted civilian governments from office, or used stooges to replace them. This would explain the alarm triggered by Qadri's declaration that only two institutions in Pakistan were worthy of respect: the army and the judiciary – both opponents of the government. His statement gave rise to fears that the military was behind this highly organised protest, and that it was now grooming its own people to form an interim administration.

When the judiciary issued a warrant for the arrest of Prime Minister Raja Pervez Ashraf on suspicion of corruption, it appeared to be a fix. The move was made public just as Qadri was giving the government a dressing down in front of his supporters. The country's most senior judge is conducting a bitter proxy war against President Zardari. Last year, the Prime Minister at the time Yousaf Raza Gilani was forced to step down after the Supreme Court found him guilty of contempt of court.

It was the attitude of political parties that essentially ended the protest rally. All representatives across the political spectrum unanimously insisted that the elections be conducted in an orderly fashion. At the same time, they also criticised Qadri's actions as undemocratic. Eventually, government representatives met with Qadri and agreed on a common declaration, probably to offer the cleric a dignified way out and to peacefully break up the mass rallies.

All just a fix?

The negotiated five points were less than revolutionary. The dissolution of parliament will now take place by 16 March at the latest, to enable the poll to take place in early May. The only point that could be seen as a success for the newly nominated opposition leader, who is not even represented in parliament, is an agreement that the caretaker government will only be appointed under consultation with all parties, including Qadri.

This sudden harmony between the government and the cleric unleashed an immediate flurry of speculation in Pakistan's media: Had it all perhaps been agreed in advance? That the government would emerge unscathed from the staged "revolution" and co-opt a man who ostensibly represented the will of the people? Within Pakistan's opaque power structures, no intrigue appears too absurd. 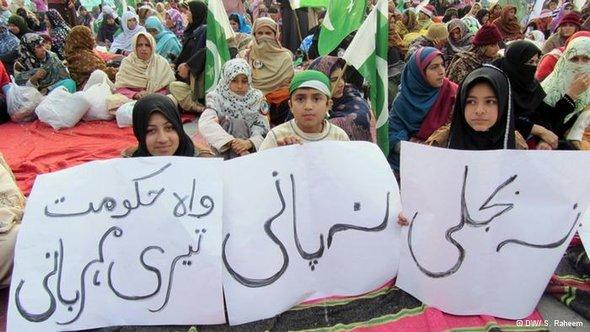 Protest against inflation, rising food prices and poverty: "Thanks to the government, we have neither power nor water" – say these demonstrators in Islamabad

​​All this makes clear, however, is the high levels of disaffection felt by the population. Many of the protesters appeared to be members of the lower middle class from provincial towns. These people have worked hard to raise their living standards, and the crisis is undermining their efforts. They are kept abreast of the nation's problems by incessant daily reports by a dozen private television channels. Furthermore, US drone attacks on suspected terrorist positions in the border region, which are tolerated by the government and the military, are perceived by many Pakistanis as a violation of national sovereignty.

A saviour operating outside the political class

Political frustration, a lack of perspectives and wounded national pride go to make up an explosive cocktail that is easy to exploit. This is not only evident from the enraged mobs that took to the streets in protest at the Mohammed film last September. The success of figures such as Qadri, who present themselves as saviours operating outside the political class, can also be attributed to this sense of frustration.

Former star cricketer Imran Khan also aims to fight corruption at the helm of his "Justice Movement", and likes to strike nationalistic undertones. This is an organisation Khan has built up over several years, and he has become a noteworthy challenger of Pakistan's mainstream parties. With a campaign waged via social media and pop concert-style public appearances, he is focusing on an aspect that could well make a difference in the next election: Pakistani youth.

Almost half of all 85 million registered voters are younger than 35 years old, and many are voting for the first time. Will they break with ubiquitous structures of political loyalty, which are for most part based on clientelism and patronage? Beyond populism and back-room politics, the legitimacy of the future government – and therefore the progress of Pakistan's democratic development – primarily depends on whether parties and politicians can credibly address the hopes and concerns of young voters.

Many predominantly Muslim countries have penal laws against "blasphemy", "defamation of religion" and "apostasy". In practice they serve as highly effective weapons to settle ... END_OF_DOCUMENT_TOKEN_TO_BE_REPLACED

Modi’s Citizenship Amendment Act grants the Indian citizenship to members of persecuted minorities from neighbouring countries, yet excludes Muslims. This has sparked waves of ... END_OF_DOCUMENT_TOKEN_TO_BE_REPLACED

Calls for a free Kashmir are becoming louder on both sides of the divided region. Can the German reunification model be applied to the India- and Pakistan-ruled Kashmirs? And what ... END_OF_DOCUMENT_TOKEN_TO_BE_REPLACED

Indiaʹs constitution prohibits discrimination on the basis of religion, but the government of Prime Minister Narendra Modi does not care. Run by Hindu-supremacists, it is ... END_OF_DOCUMENT_TOKEN_TO_BE_REPLACED

Using a combination of poetry and narrative, Pakistani poet Yusra Amjad talks about her compatriots' perception of the institution of marriage. END_OF_DOCUMENT_TOKEN_TO_BE_REPLACED

Abu Dhabi and Riyadh see a natural partnership with Modi’s government, a co-operation that could change the dynamics of the South Asian-Gulf nexus. By Jean-Loup Samaan END_OF_DOCUMENT_TOKEN_TO_BE_REPLACED

His members all across the world, specifically gave funds for this revolution. The world cannot understand why or how this happens because no organisation nor leader can produce people who want to promote true peaceful ethics and want to promote that.

Everything was done openly and everthing Dr Qadri wanted all were accepted in letter and spirit. Therefore, the 180 million poor suffering dying Pakistanis won!

After the revolution, it has been proven that no one was behind him, even the journalists who are corrupted have said this too. There is no doubt that the only people were behind was the 180 million Pakistanis.

END_OF_DOCUMENT_TOKEN_TO_BE_REPLACED
Social media
and networks
Subscribe to our
newsletter