Marwan Abado was forced to leave his native city of Beirut as a result of the country's civil war. His life path shows that exile does not necessarily mean leading the life of an outsider. Suleman Taufiq met the cheerful oud player in his adopted city of Vienna 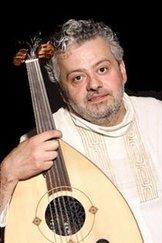 ​​Marwan Abado had already shown his first interest in music during his childhood in Beirut, where he was born in 1967 into a family of refugees. They had been driven out of Palestine in 1948. This was city of contrasts, where numerous influences from East and West came together and cross-pollinated. Beirut was home to a generation of young musicians, who eagerly absorbed and digested all the new musical trends.

The career of Marwan Abado began in this stimulating atmosphere. When asked where he got his love of singing, he says, "From my grandfather. He was always singing."

The new and unknown universe of art

In 1975, civil war broke out in Lebanon. The eight-year-old Abado had to abandon the refugee camp of Dbaya in the north of Beirut. The family then moved to an apartment in the west of the city. They lived in an eleven-story building that also housed an art academy. There he took music lessons and came into contact with new musical forms, theatre, and speech song.

​​The young Abado was spellbound by this new and fascinating world. Here, a completely unknown universe of visual and performing arts was revealed to him and held him forever enthralled. With his savings, he bought his first Arabic lute, an oud. In 1983, he became a member of a band with which he performed for two years.

He could no longer, however, remain in Beirut. The civil war was raging in Lebanon and it was becoming increasingly dangerous, especially for Palestinians. Abado decided to go to Europe. He had no fixed destination, but just wanted to find a place where he could stay. Vienna was pure chance. There, he continued his studies in Oriental and European music.

"I have met so many people and musicians from different cultures and musical identities in Vienna, and I believe that I wouldn't have found anything similar in Lebanon. These encounters don't merely mean shaking hands and saying "great" and "fantastic," but also that profound musical and social debates can arise."

Abado saw in Vienna the "gateway to the world," the ideal location to further develop musically. His first album, "Kreise," clearly shows that he has been inspired by Western music. "Kreise" consists predominantly of instrumental music for oud, double bass, soprano saxophone, and percussion.

An abundance of images

​​In addition to such instrumental albums, Marwan Abado constantly returns to his great love, poetry. For example, "Kabila" highlights texts by modern Arabic authors as well as his own poetry. In these efforts, he frequently collaborates with young Arabic poets. "My main concern is to break the rhetoric in language. This is why I love modern Arabic poetry, which expresses of an abundance of images."

"My music is a part of my life. It has an origin, stemming from a particular biography, and also arises out of a life in exquisite exile, here in Vienna. For me, exile is a place of encounters, of development. These encounters are also part of the compositions."

In praise of boredom

​​One of the most important influences on his music has been jazz. Improvisation is the magic word that connects both jazz and oriental music styles. The great variety of improvisation is a typical characteristic of oriental music. It is remarkable, however, that jazz is not employed to spice up Arabic music.

In an age of "World Music," where the frequent trend is towards a musical synthesis or perhaps rather a colourful tonal soup, Abado counters with a style of music in which the individual musical worlds sound and remain clearly differentiated.

Abado's music cannot be appreciated in isolation from the situation in Palestine. Many of his songs touch on the Palestinian reality, as in this song:

New Arabic Oud Music
From Meditative to Tempestuous
Contemporary oud players are trying out completely new approaches to their instrument. While still relying on its tranquil tone, they do not hesitate to play with loud electronic amplification. Kersten Knipp offers an overview.

END_OF_DOCUMENT_TOKEN_TO_BE_REPLACED
Social media
and networks
Subscribe to our
newsletter