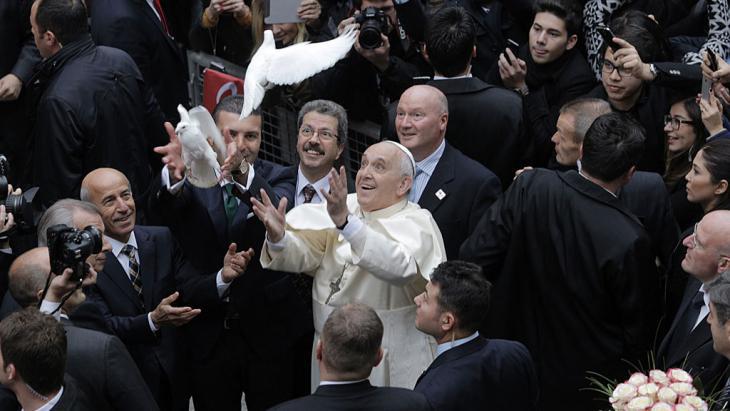 The papal visit to Turkey
A message of peace and dialogue

Pope Francis' three-day visit to Turkey was the first papal visit to that country in eight years. The pontiff made a lasting impression on the Turkish people. By Luise Sammann in Istanbul

Does the car at least have electric windows? Or only ones you can crank open? No matter: luckily, it's winter in Turkey; nobody will want to open a window. What's more, seeing as he is hardly likely to get behind the wheel himself, the power steering and horse-power of his rental car is hardly likely to be of great importance to the pope.

And yet the small French car used by Pope Francis during his first visit to the Bosporus was the number one topic in many Turkish media the following day. A nippy little car like that costs around 30,000 Turkish Lira, as hair-splitting journalists immediately found out. At most, just under € 10,000. Some columnists could hardly believe it.

Their excitement is understandable when one considers that the Turkish president's current limousine is worth a hefty 1 million Lira. That's thirty-three times as much as the pope's bargain car. What a difference!

In fact, the two men, who met in Ankara at the weekend, could not be more different in a number of other respects. On the one side, the gentle man of the cloth from Rome, who has made modesty his trademark and asks to be booked into simple guesthouses. And on the other, the blustering "Sultan of the Bosporus", who has just had a presidential palace built containing – believe it or not – a thousand rooms. Pope Francis, of all people, had the honour of being his first guest there.

Like everything in Turkey these days, even the papal visit was not least a question of pro or contra Erdogan. His supporters were proud that their president was receiving his guest in such a palace. His political opponents found it embarrassing. A group of activists even called on the Vatican to boycott the visit to the palace shortly before the visit. It was impossible, they said, for Pope Francis to be received in this magnificent building, paid for by Turkish taxpayers. But they – and everyone else who had secretly been hoping for a sensation – were disappointed. Francis had not come to the Bosporus in order to haul Mr Erdogan over the coals. 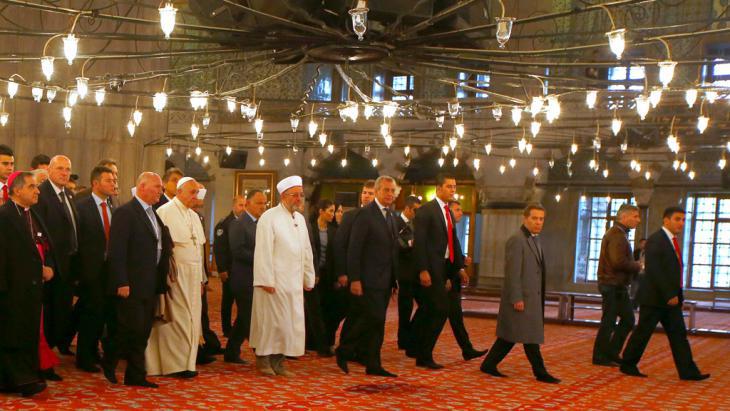 A symbolic gesture for dialogue between the religions: during a visit to the Blue Mosque in Istanbul with Rahmi Yaran, the mufti of Istanbul (centre), on 29 November 2014, Pope Francis spent a number of minutes in silent contemplation and bowed in the direction of Mecca, just like his predecessor, Benedict XVI, did during his visit in 2006

The Koran is a book of peace

This visit was not intended to be about conflict, but about dialogue and harmony ‒ not only with the Orthodox Christians, whose leader, Bartholomew I, Pope Francis met in Istanbul, but also, of course, with the Muslims. The pope emphasised that the Koran is a work of peace and made a highly symbolic bow towards Mecca in the Blue Mosque.

With gestures of this kind, he quickly won over the Turkish people, who had not previously been known as fans of the pope. They remember Pope Francis' predecessor, Benedict XVI, above all as a man who was hostile to Islam, following his famous Regensburg address.

With all this need for harmony, not even the famously complex situation of religious minorities in Turkey got the kind of attention it really deserved. "Freedom of religion and freedom of expression, when truly guaranteed to each person, will help friendship to flourish and thus become an eloquent sign of peace," said the pope. Well, that's all well and good, but was this criticism? An expression of hope? Praise?

Perhaps the aim was that everyone should simply take this in whatever sense he sees fit. Western observers will be delighted by the mention of the keywords "freedom of religion and expression"; and with this level of diplomacy, Turkish politicians will see no reason to feel attacked. Moreover, the pope's statement that "it is essential that all citizens – Muslim, Jewish and Christian – both in the provision and practice of the law, enjoy the same rights and respect the same duties," can hardly have given Mr Erdogan any sleepless nights.

But let's be honest: what could have been expected? What could Pope Francis have achieved? After all, anyone who looks at this issue a little more closely knows that the decades-old problem relating to minorities in Turkey is not something that can be got rid of at a stroke with the right choice of words.

"In the past few years, Turkey has done a great deal for the rights of minorities," President Erdogan hurried to inform his visitor. And that is true; nobody can deny that the conservative AKP government has made concessions to the non-Muslim population. For example, foundation assets that were expropriated without compensation in the past can now be reclaimed.

It is now possible to hold religious services at symbolic places like the Church of the Holy Cross in the South-East of the country, at least on special occasions, and there has been some progress in the long-running conflict over the estates of the Syriac Orthodox monastery of Mor Gabriel. 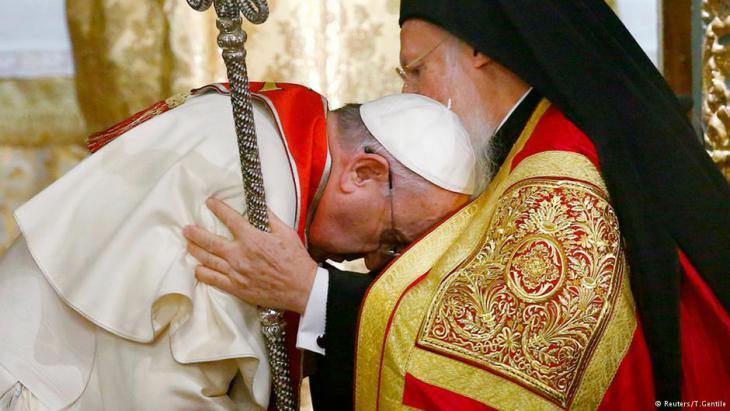 Pope Francis receives a blessing from Bartholomew I, the spiritual leader of the world's Orthodox Christians on 29 November 2014. In a strong show of Christian unity, they called for an end to the persecution of religious minorities in Syria and Iraq and called for dialogue with Muslims

But in any case, the real problem facing minorities in Turkey is not just long-standing regulations such as the discriminatory practice of declaring a Turkish person's religion on his/her ID card, or the prohibition on Churches and religious communities buying land, building churches or training young priests. The real problem lies in the minds of the people, who for the past 91 years have lived in a republic where all non-Sunnis – regardless of whether they are Orthodox Christians, Catholics, Jews or Alawites – are seen as a potential threat to the unity of the Turkish state.

"Non-Muslims often don't count as real citizens in Turkey," says Arus Yumul, an Armenian-Turkish sociologist at Istanbul’s Bilgi University. She knows: "In this country, it's still seen as almost a crime to have an Armenian in the family. So calling somebody an Armenian is an insult that can land people in court and get them penalised."

This culture cannot be got rid of by changes in legislation and official rulings ‒ and certainly not by a visitor from Rome, however venerable he may be. For this reason it would have been presumptuous to expect more from Pope Francis than a few words of warning.

No matter how revolutionary this pope's behaviour has been since he took office, in the end, he is not a Gezi demonstrator, but a man of the cloth, which is why it is not at all remarkable that ultimately, the most exciting thing about his visit for many Turks was the little car he was driven around in and not necessarily the words he spoke.

Just as the Islamic Revolution fundamentally changed Iran 43 years ago and had an impact far beyond the country's borders, the current wave of protests sweeping the country is set ... END_OF_DOCUMENT_TOKEN_TO_BE_REPLACED

Fariduddin Attar’s "The Conference of the Birds", one of the seminal works of Islamic mysticism, has recently been published in sumptuously illustrated German translation. It ... END_OF_DOCUMENT_TOKEN_TO_BE_REPLACED

Like Christianity, Europe's history is one of migration. Both have strong roots in the Orient and in cultures thousands of years old. Cultural historian Bernhard Braun invites us ... END_OF_DOCUMENT_TOKEN_TO_BE_REPLACED

When she ascended the throne, millions of Muslims still lived under British rule. Later, Elizabeth II appealed for tolerance in a multi-religious society. She was the first ... END_OF_DOCUMENT_TOKEN_TO_BE_REPLACED

Bachtyar Ali sends the hero of his latest novel – "Mein Onkel den der Wind mitnahm" – literally flying. Jamshid is so thin after his years as a political prisoner that a gust of ... END_OF_DOCUMENT_TOKEN_TO_BE_REPLACED

Comments for this article: A message of peace and dialogue

Peace and dialogue needs of the time

Hon Pope recent visit to Turkey is very important development toward peace, understanding and coexistence between Muslims and Christians in the globe. If Abraham paths get together, think and act for peace then I am
sure Peaceful atmosphere will be seen every where, but world powers make sure justice in the society, peace
will be every where, there is no justice then no peace. I appeal to world religions, cultures and faiths please stop
campaign against Islam and Muslims. Islam is religion of peace, stability and tolerance and Qantara is playing very signified valuable role on it.

END_OF_DOCUMENT_TOKEN_TO_BE_REPLACED
Social media
and networks
Subscribe to our
newsletter