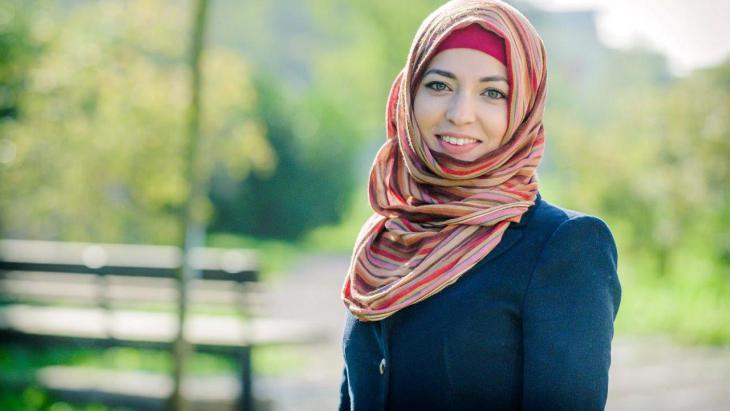 The perception of Islam as the enemy

When fear creeps in

The sudden rise of the Pegida movement in Germany has shown that many people here obviously have a deep-seated fear of Islam. Khola Maryam Hubsch wonders what it is that makes people fear a threat that doesn't actually exist

There are only four minarets in Switzerland, and yet there is a national debate about whether to ban them. There are a few hundred burqa-wearers in Germany, and yet across the country, people are discussing whether they should be banned. Foreigners account for 2.2 per cent of the population of Dresden, and yet 10,000 people there are demonstrating against the Islamisation of the West. What is it that makes people fear a threat that doesn't actually exist?

History shows us that linking social problems to a supposed threat from a religious minority is a frequently used construct. Fuelled by political rhetoric, it is first and foremost a product of ignorance and fantasy, as the philosopher Martha Nussbaum puts it. But fear has a biological function; without fear, we would all be dead already.

Someone who is prepared for the sudden appearance of an attacker is more likely to survive. For this reason, the fear that somebody might creep up on us from behind makes sense. Moreover, the knowledge of potential danger also conveys a sense of superiority: while all the others fail to see through an evil force that has hidden its true face, the person who recognises the danger early on can turn out to be the community's saviour. This feeling flatters the ego. It is also currently leading to irrational reactions. Fear is one of the most primitive emotions; fear needs no developed thought; fear suppresses rational insights.

Picture the scene: Group A is repeatedly portrayed as backward, misogynistic and given to violence. But in reality, there are hardly any perceptible differences between Group A and Group B. So how can this cognitive dissonance between reality and construction be overcome? By alleging that Group A is acting in secret, preparing an ambush. This is why people are warning of creeping Islamisation in Germany, just as there were warnings about Roman Catholic immigration to the United States at the end of the nineteenth century. 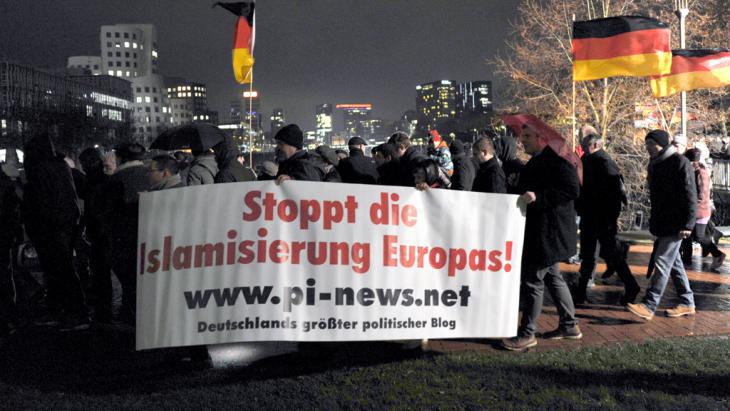 A Pegida march in Dusseldorf. "The flames of fear that the Pegida movement is fanning are nothing new. The movement draws on the arguments of the "Eurabia" activists, who have been warning for years that the fertility of Muslim women will erode Europe and lead to a Muslim majority that will introduce Sharia law," writes Khola Maryam Hubsch

The same rhetoric of fear, then as now

The rhetoric of fear has not changed since then: Catholics were seen as a profound threat to democracy, equality and secular values. Feminists, who had fought for women's right to vote, feared that Catholic immigration would hinder the fight for equal rights for women. Catholic women were seen as oppressed, and the nun's veil as proof of a religious extremism that subjugated women. The high birth rate among Catholic women, who refused to use birth control, would very soon lead to a Catholic majority that would push through its strictly religious ideas.

Terrorist attacks and the rise of fascism in the Catholic part of Europe seemed to substantiate these fears. As soon as they were in power, Catholics would introduce radically religious laws and make the United States a "Catholic republic". In short, Catholic immigration was regarded as a serious threat to liberalism.

The flames of fear that the Pegida movement is fanning are nothing new. The movement draws on the arguments of the "Eurabia" activists, who have been warning for years that the fertility of Muslim women will erode Europe and lead to a Muslim majority that will introduce Sharia law.

The facts tell a very different story: as urbanisation and levels of education rise, the birth rate worldwide drops. In Europe too, these factors led to a drastic fall in the birth rate among Muslim immigrants over a very short period. Studies show that at current immigration levels and birth rate trends, Muslims will still make up less than 10 per cent of the total population of the EU in the coming decades. Right now, less than 15 per cent of immigrants to Germany are Muslims. Nevertheless, some people's identity seems to be called into question when Muslims make their religion visible.

Why do we keep on discussing a burqa ban? One of the central arguments of the burqa opponents is that veiling the face stands for the oppression of women, degrading and objectifying them. But how exactly do they know that? I know a lot of women who veil their faces, and I know that for the most part they live a normal, self-determined life.

Can you really read oppression in a piece of clothing? The World Health Organisation speaks of violence against women reaching "epidemic proportions" worldwide. In Europe too, one in three women has had some experience of sexual or physical violence – without wearing a burqa.

There are no studies about women who wear burqas. And even if a connection between the burqas and oppression were to be statistically proven, wouldn't we then logically have to ban alcohol as well? The close connection between alcohol consumption and assault or violence against women has been known for a long time. Another glaring inconsistency in this argument is that our whole society is riddled with things that degrade and objectify women. "Sex magazines, pornography, [...] tight jeans, transparent or revealing clothing — all of these products, arguably, treat women as objects, as do many aspects of our media culture," as Martha Nussbaum, professor of law and ethics at the University of Chicago, rightly objects. 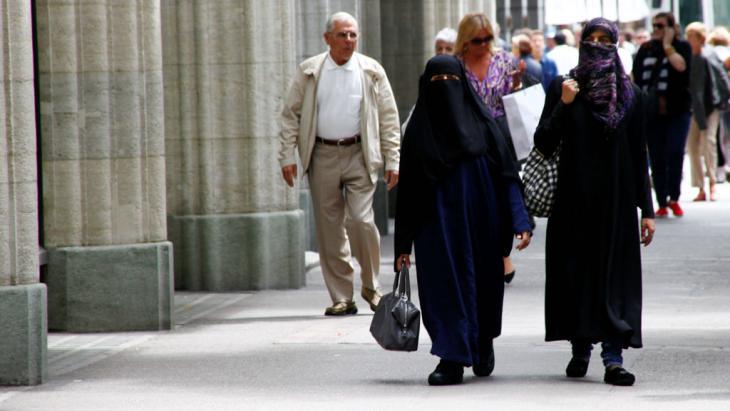 Women wearing burqas in Zurich. "The alleged connection between veiling and oppression sometimes exposes the fact that people are unburdening themselves of their own 'defect' by projecting it onto Muslim women," writes Khola Maryam Hubsch

Sigmund Freud's observation that the uncanny, which makes us fearful, is our own repressed impulses, seems to apply here. A culture's unconscious is revealed precisely through its gender order. A few years ago, near-identical arguments led to a ban on female teachers wearing headscarves. The headscarf was encoded as a clear symbol of oppression, although empirical data shows that over 90 per cent of women in Germany who wear one do so for religious reasons. The alleged connection between veiling and oppression sometimes exposes the fact that people are unburdening themselves of their own "defect" by projecting it onto Muslim women.

In Christianity, veiling is actually described in the Letters to the Corinthians as a sign of the subordination of women. By contrast, no such explanation of veiling is to be found in the Koran. Muslim women are therefore serving as a negative foil by which we can idealise ourselves, affirm our own progressiveness and block out the lack of gender equality in our own country.

The foreign as an imagined threat

Concentrating on an entirely imagined threat from what is foreign ultimately leads to really important issues not being addressed. In times of necessary immigration, a more important goal should be to strengthen social cohesion. However, such cohesion is not created by a culture of mistrust and prohibition.

We have to recognise that our religio-political order must change in light of the pluralisation in our country, and that the principles of justice that are manifested in our fundamental rights are the foundation. In a political community such as this, the aim cannot be to implement the ideas of the majority through prohibitions and demonstrations. It must be to respect minorities as equals, and, at the same time, to allow them to be different. Only then will they become a natural part of society – one that is no longer the source of irrational fears.

Khola Maryam Hubsch
© Qantara.de 2014
Khola Maryam Hubsch was born in 1980. She lives in Frankfurt am Main and works as a freelance journalist and author. Her most recent book is titled: "Unter dem Schleier die Freiheit – Was der Islam zu einem wirklich emanzipierten Frauenbild beitragen kann" (Freedom under the veil – what Islam can contribute to a really emancipated image of women), Patmos, 2014.

Home
Print
Newsletter
More on this topic
The sudden rise of Germany's Islamophobic Pegida movement: "The product of a nervous society"Right-wing extremism and Islamophobia in Germany: Sending out a political signalIslamophobia: Evidence does not support fears of Islam in the WestMuslims in Germany: Blocked integration
Related Topics
Burka, Integration in Germany, Islamophobia, Muslim women, Muslims in the West, Pegida, The Headscarf Controversy
All Topics

On 24 November 2019, the International Consortium of Investigative Journalists (ICIJ) – along with 17 media partners from 14 countries around the world – published the "China ... END_OF_DOCUMENT_TOKEN_TO_BE_REPLACED

The refugee crisis on Turkey's borders can only be resolved with a new EU deal. It should build on the current plan, but avoid its flaws, writes Ozgur Unluhisarcikli of the German ... END_OF_DOCUMENT_TOKEN_TO_BE_REPLACED

Children’s books shape the way we see the world as we grow up. In recent years calls have been growing for European publishers to reflect the increasing diversity. By Sonja ... END_OF_DOCUMENT_TOKEN_TO_BE_REPLACED

Germany and other member states of the European Union are for the first time making use of the so-called INSTEX mechanism to circumvent the sanctions imposed on Iran by the United ... END_OF_DOCUMENT_TOKEN_TO_BE_REPLACED

The coronavirus pandemic has disrupted social and economic life across the globe. But in the Middle East, authorities have coupled religious edicts with public health advice to ... END_OF_DOCUMENT_TOKEN_TO_BE_REPLACED

In the face of COVID-19, we need to admit the political mistakes of recent years and adjust our trajectory according to the compass of reality. People around the world – ... END_OF_DOCUMENT_TOKEN_TO_BE_REPLACED

Comments for this article: When fear creeps in

The author makes a cartoon of the fears from many, and then tries to convince us that those who have fears are just idiots who don't know islam. However, she neglects many ofthe main reasons of those fears. The burqa is just a symbol, feared by a few.But the very clear message of expansion and agression from the islamists, that is feared by many. Islamist are those who insist that their religious rules should have priorityu above secular rules.

That's just one example. An analysis that censors most, of not all, main reasons of fears, can never calm those fears.

END_OF_DOCUMENT_TOKEN_TO_BE_REPLACED
Social media
and networks
Subscribe to our
newsletter