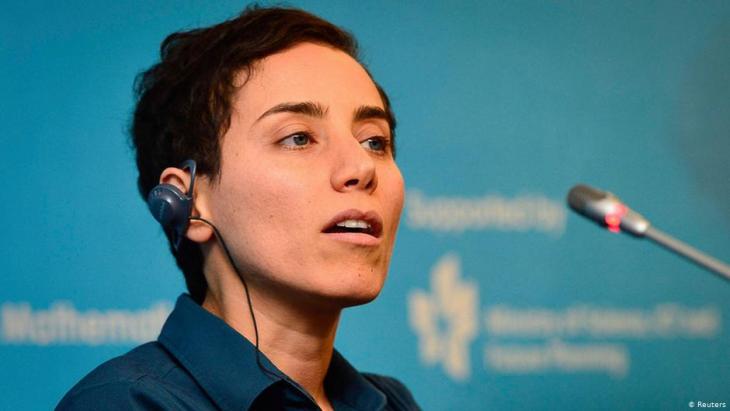 "The Iranian mathematician Maryam Mirzakhani, who died on 14 July 2017, at the age of forty, was known to her colleagues as a virtuoso in the dynamics and geometry of complex surfaces – 'science-fiction mathematics', one admirer called it – and to her young daughter, Anahita, as something of an artist."

Siobhan Roberts’ words in the New Yorker sums up in simplest terms the sudden sense of loss and quiet mourning millions of Iranians around the world and, with them, the world of science at large felt at the tragic ending of a beautiful mind so early in its blooming.

She travelled to the United States for her graduate studies, earning her PhD from Harvard University in 2004. She was awarded the Fields Medal in 2014 for her "outstanding contributions to the dynamics and geometry of Riemann surfaces and their moduli spaces". Her death left her immediate family, her friends and colleagues, and with them her nation, at a loss for words.

Complicating the global image of a nation
Many of the reactions to Mirzakhani's death were both normal and predictable. The Iranian President Hassan Rouhani and the President of Stanford University Marc Tessier-Lavigne both issued solemn statements of condolence. The Iranian media competed in showering her with accolades. The Iranian oppositional venues in the United States and Europe began to use and abuse the occasion to denounce the Islamic Republic for its various policies, especially for the conditions conducive to "brain drain".
Maryam Mirzakhani left Iran to pursue her advanced mathematical studies in the United States. Had she been born a thousand years ago, she would have gone to Baghdad to do so – and she would have probably gone to Beijing were she to have been born just a couple of decades from now.
The question of "brain drain" is, of course, a serious malady in Iran and many other similar countries. But Maryam Mirzakhani was no "brain drain". Hers was a superior intelligence and she travelled where she could nourish it best – and that travelling did not suddenly turn her into this strange thing called "Iran-born", instead of just plain "Iranian".
But something else, something quite simple and significant, was also happening, just like Maryam Mirzakhani herself, gently and quietly.
Both upon their global recognitions and – perforce – upon their early and tragic passing, markedly brilliant minds and beautiful souls like Maryam Mirzakhani become a symbol, a sign, a citation far beyond who they are, and what they have achieved in their professional calling. From the time that she achieved her coveted Fields Medal, Maryam Mirzakhani began to complicate the global image of her homeland, against the backdrop of the pervasive demonisation of Iran by one brand of warmongering or another.

Dalia Hatuqa is an experienced journalist who has reported on the Israeli-Palestinian conflict from Ramallah, Washington DC and Amman. A writer for Time Magazine, Foreign Affairs ... END_OF_DOCUMENT_TOKEN_TO_BE_REPLACED

Since President Abdul Fattah al-Sisi seized power in Egypt in 2013, he has ruled the country with an iron fist. Civil society, opposition and free press struggle to survive. Tens ... END_OF_DOCUMENT_TOKEN_TO_BE_REPLACED

Very different Western reactions to the suffering in Ukraine and the Arab world show that there is a profound rift among cultures. Essay by Michael Young END_OF_DOCUMENT_TOKEN_TO_BE_REPLACED

Many Turks are dissatisfied with the international status of their country. At the same time, opinion polls reveal great scepticism among the Turkish population towards the USA. ... END_OF_DOCUMENT_TOKEN_TO_BE_REPLACED

Since Spain abandoned its traditional neutrality towards the conflict in Western Sahara, Morocco has announced a "new phase" in relations between the two countries. But what is ... END_OF_DOCUMENT_TOKEN_TO_BE_REPLACED
Author:
Hamid Dabashi
Date:
Mail:
Send via mail

END_OF_DOCUMENT_TOKEN_TO_BE_REPLACED
Social media
and networks
Subscribe to our
newsletter