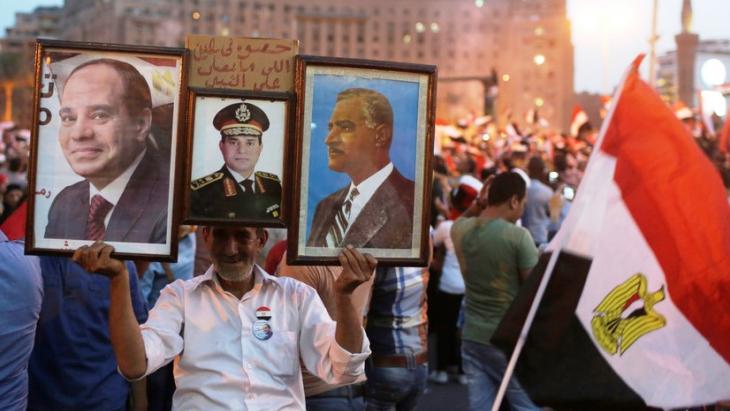 The personality cult of Egypt's former president
Nasser is everywhere

Hagiography on the Nile: the cult of Gamal Abdel Nasser continues to spread, in part because it serves the purposes of Egypt's incumbent president. By Joseph Croitoru

It is well known that Egyptian President Abdul Fattah al-Sisi considers himself a great reformer and a significant number of Egyptians even regard him as a bringer of salvation. This image, which is in part a result of the government's increasingly stringent control of the media, is further amplified by the comparison commonly drawn between Sisi and the legendary Egyptian President Gamal Abdel Nasser: like the famous leader of the pan-Arab movement, his present successor is striving for a comprehensive modernisation of the country. And like Nasser did at the time, the current President takes an uncompromising attitude towards shutting down the Islamist Muslim Brotherhood – something Nasser did not succeed in, despite severe repression.

It is arguably thanks to the consolidation of the personality cult around current Egyptian President al-Sisi that his role model has also gradually become the subject of national glorification. Already in 2016, the first Egyptian museum for the commemoration of Nasser was opened in his former residence in the east of Cairo – by Sisi personally.

The institution's official name is the "Museum of the Leader Gamal Abdel Nasser", which likewise evokes associations with Sisi, whose admirers like to call him "Great Leader" (Arabic: za'im). The museum's exhibits, which also include the living and work spaces of the famous statesman, support the popular image of a charismatic politician and portray Nasser as a determined revolutionary and passionate speaker who knows how to inspire the masses.

Included in the display, of course, is a photo of the Arab socialist making his pilgrimage to Mecca – Sisi for his part, who sees himself as Nasser's political and spiritual heir, is known for his piety. In the central exhibition hall there are photographs showing the various stages of Nasser's military and political career, as well as several personal items, official gifts, busts and state files. 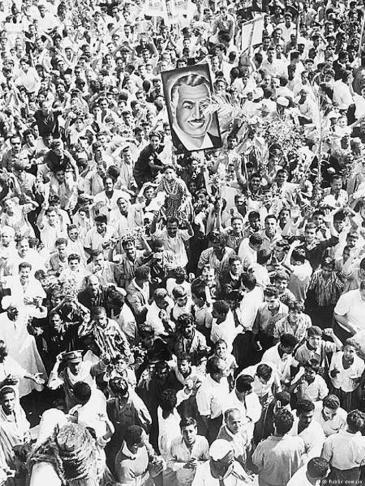 Undying popularity: for many Egyptians, Abdel Nasser was a charismatic personality who represented a pan-Arab ideology and opposed imperialism. To this day, the veneration of his person and his political activities continues in large sections of the population, which is why the leadership in Cairo is keen to uphold the Nasser myth

Another room is dedicated to the "history of the people" and features mainly film clips remembering Nasser's work as an Egyptian politician and leader of the pan-Arab revolution.

It was not until President Sisi came to power that anyone took an interest in Nasser's former residence, even though it had already been handed over to the government by Nasser's sons after the death of their mother in 1992. His descendants play a central role today in the public tribute to Gamal Abdel Nasser and help to maintain the cult around al-Sisi by declaring him to be Nasser's only true successor.

And they are courted by the state in return.

On the dates of Nasser's birth and death (15 January and 28 September), which have become important occasions for the Egyptian press and public, his descendants are guests of honour at memorial ceremonies at the Nasser Museum as well as at his tomb in the mosque named after him in Cairo.

The Nasser cult is everywhere

The number of such state rituals continues to grow in part due to an increasing number of cultural facilities that are contributing to the spread of the cult around Nasser.

In 2018, for example, to mark what would have been his hundredth birthday, two more institutions named after him were opened: a small museum with a library in Nasser's birth house in Alexandria and a house of culture in the village of Bani Mar near the city of Asyut in central Egypt.

The latter is only related indirectly to the former president, however; it is the birthplace of his father. This is only logical, though, when now even Nasser's grandson Gamal Khaled Abdel is basking in the limelight of the Egyptian public.

For the anniversary of his grandfather's death last September, he published a book of the Egyptian president's most important writings, including his memoirs from the Arab-Israeli War of 1948 and his revolutionary manifesto from 1954.

Rediscovery of the would-be literary figure

With the publication of this book, which Gamal Khaled wrote the introduction for and has been promoting on reading tours around Egypt and other Arab countries for several months, the grandson has joined the ranks of Egyptian publicists and journalists practicing a sort of Nasser hagiography.

This also includes his re-discovery as a would-be writer. An essay has been dug up entitled "On the Road to Freedom", written by Nasser when he was in secondary school, in which he talks about the Battle of Rashid in 1807, when the Egyptians tried to fight off a British invasion.

While the man who would one day be president never finished his essay, his court propagandists liked to draw on this story when they tried after the Suez War in 1956 to present the president as the victor over Israel and its British and French allies. 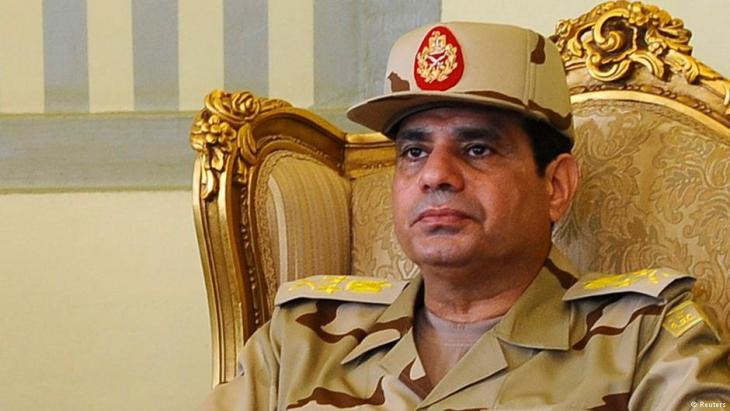 The glory of bygone days: "Egyptian President Abdul Fattah al-Sisi considers himself a great reformer and a significant number of Egyptians even regard him as a bringer of salvation. This image, which is in part a result of the government's increasingly stringent control of the media, is further amplified by the comparison commonly drawn between Sisi and the legendary Egyptian President Gamal Abdel Nasser," writes Joseph Croitoru

In 1958, the Egyptian Ministry of Culture announced a competition for writers to finish Nasser's essay. Three authors close to the regime were honoured for their submitted works. After Nasser's death in the early seventies, one of these works even became part of the national school syllabus.

The decline of pan-Arabism and the rise of Islamism

It is somewhat ironic that prominent defectors from the Islamist Muslim Brotherhood who have now joined the choir of those singing Nasser's praises castigate the Brotherhood for remaining hostile towards him. After all, Nasser's power fantasies are known to be partially responsible for Egypt's devastating defeat in the 1967 war against Israel, which marked the decline of pan-Arabism and heralded the rise of Islamism.

Such correlations, however, are glossed over by today's Nasser cult, which also means that whenever his mythology is challenged in Egypt, the Muslim Brotherhood is blamed. For example, the Mauritanian government's recent decision to rename Nasser Street in the capital Nouakchott the "Street of National Unity" caused an uproar in Egypt.

Prior to this, the renaming of a Nasser School in the Libyan capital of Tripoli after an Islamist militia active there had already led to such fervent protest in the Arab media that the Libyan Minister of Education was forced to reverse the decision.

With authoritarianism once more gaining ground in the Middle East and North Africa, the European Council on Foreign Relations explores how European diplomats can be more effective ... END_OF_DOCUMENT_TOKEN_TO_BE_REPLACED

Abdul Fattah al-Sisi's National Human Rights Strategy smacks of the containment and sabotage tactics adopted by counter-revolutionaries during Egypt's 2011 revolution and its ... END_OF_DOCUMENT_TOKEN_TO_BE_REPLACED

Sudan is the exception to the rule in the United Arab Emirates’ counter-revolutionary playbook, writes James M. Dorsey. In contrast to Egypt or Yemen, where it went out of its way ... END_OF_DOCUMENT_TOKEN_TO_BE_REPLACED

Racism exists in the Arab world. People with dark skin are discriminated against and often see their rights curtailed. Activists have had enough of such treatment and are starting ... END_OF_DOCUMENT_TOKEN_TO_BE_REPLACED

General Abdel Fattah Al-Burhan has declared a state of emergency in Sudan and dissolved the Sovereign Council, which was made up of military personnel and civilians. What will now ... END_OF_DOCUMENT_TOKEN_TO_BE_REPLACED

Sex education – taboo in the Middle East. Or is it? Thanks to social media, millions these days are daring to ask everything about "it". Jennifer Holleis has the details END_OF_DOCUMENT_TOKEN_TO_BE_REPLACED
Author:
Joseph Croitoru
Date:
Mail:
Send via mail

END_OF_DOCUMENT_TOKEN_TO_BE_REPLACED
Social media
and networks
Subscribe to our
newsletter