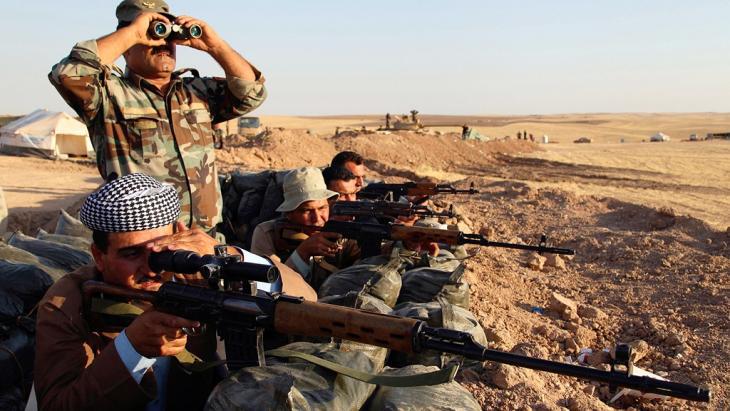 The Peshmerga fight against IS militia

The Kurdish Peshmerga have limited tools in hand for their fight against the IS terror militia: they are for the most part poorly equipped, military co-ordination with the Americans is sluggish and US air strikes have thus far had little impact. By Karim El-Gawhary in Iraq

No binoculars are needed to make out the spot where the supposed holy warriors have taken cover. The fighters of the IS, the Islamic State group, are lurking in a verdant strip of land only three kilometres away. Just behind it lies the town of Jalula, which the Iraqi army was compelled to cede without a fight two months ago.

The Kurdish Peshmerga are positioned on a dusty hill. The air shimmers in the heat. The wind hits your face like a hot-air dryer. It feels like over 50 degrees in the sun. A dozen Kurdish fighters squeeze together in front of a container in the only bit of shadow available. Three of them stand guard, their eyes fixed on the grass verge down on the plain.

The scene is like something out of Karl May's novel "Through Wild Kurdistan": some of them are wearing traditional wide trousers cinched with a broad belt, their scarves wrapped around their heads like turbans. Others are wearing uniforms, and still others a mix of both. With Kalashnikovs slung over their shoulders, they all have an air of the daring adventurer about them.

But this is no fantasy folklore event; it is a real war. And the enemy on the plain should not be underestimated. "Those are not wild warriors down there, but a highly disciplined, dynamic force. They are not to be underestimated; they are really good," begins the Kurdish Peshmerga Colonel Adel Nuri, describing his enemy. "They are excellently trained, and their actions show logistical intelligence," he says. 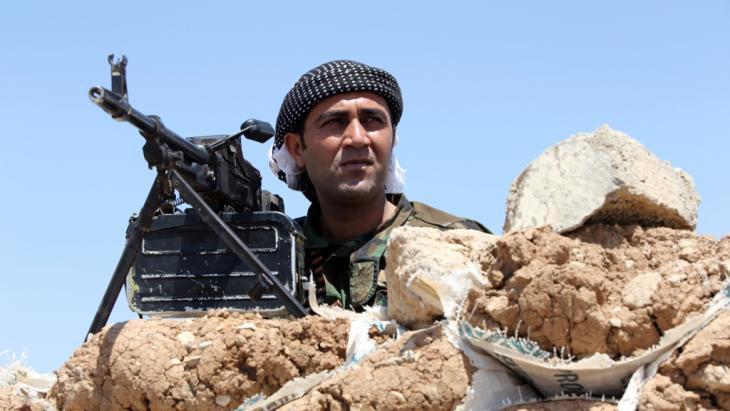 A Peshmerga fighter near Mosul: in comparison to the modern equipment stolen by the Islamic State fighters after the fall of Mosul, "the Kurds' old Kalashnikovs and other heavier ammunition, which comes mostly from 20-year-old Iraqi army stocks, look more like museum pieces," writes Karim El-Gawhary

"They never miss their target"

The commanders of the IS in Jalula are a mix of foreigners and former Iraqi officers from Saddam's army, continues Colonel Nuri. The group down on the plain is led by a Chechen. There are also Afghans and Pakistanis as well as fighters from other Arab countries such as Saudi Arabia and Syria. "They have incredible combat experience," says the colonel, who adds that the former officers from Saddam's army also know how to tactically deploy a modern army.

Colonel Nuri is particularly in awe of their snipers. "We once held up a broomstick and they hit it. They never miss their target," he remarks. This is also incidentally the reason why the colonel has no rank insignia on his shoulder, so that the IS snipers don't immediately single him out as a Peshmerga officer.

What's more, the opponent is also extremely well equipped. "They have state-of-the-art weapons that they looted from the armouries of the Iraqi army," explains Colonel Nuri. In Mosul alone, the IS captured an abandoned arsenal of modern weapons for outfitting 70,000 soldiers. "The Peshmerga can only dream of such a thing," the colonel says, adding that the enemy possesses everything the military heart could desire: "from tanks to missile launchers to armoured off-road vehicles that no anti-tank weaponry can penetrate."

In comparison, the Kurds' old Kalashnikovs and other heavier ammunition, which comes mostly from 20-year-old Iraqi army stocks, look more like museum pieces. One of the two light machine guns at their post doesn't even work anymore. One of the Peshmerga proudly holds up a newer-model American assault rifle. "We bought it on the black market for 3,000 dollars. The IS guys should just try to come get me. I'll use it to defend my homeland," he shouts. 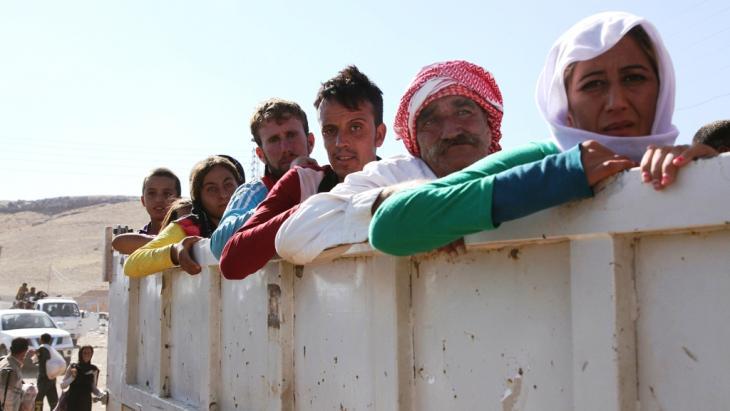 Fleeing the IS jihadists: most of the Yazidis who have fled their homes in recent weeks have crossed into northern Syria at Fishkhabour. This picture shows some of them arriving in the border town. Many, however, have since returned to the Kurdish regions of northern Iraq

A few days ago, the Peshmerga captured an IS fighter here, a Syrian. Colonel Nuri recounted the Syrian's astonishment at how the Peshmerga had held these positions with their old weapons for two months, while the official Iraqi army with their modern weaponry simply ran away from the IS fighters.

"We heard that new weapons from the USA and France have arrived in Erbil. We're supposed to be getting a delivery in the next few days, and we can hardly wait. That will really change things here," he says.

Colonel Nuri tells us that on the other side of the battle lines there are three Peshmerga corpses. He would like to exchange them for three fallen IS fighters who are still in the hospital morgue at Khanaken. But this is a war in which there are no negotiations.

The area where Colonel Nuri's post is located is of great strategic importance. This is the site of the only corridor linking the Kurdish areas in northern Iraq with Baghdad and the regular army there. And it is only 15 kilometres wide. Otherwise, the southern part of the country and the northern territories of the Kurds are separated by a swathe of land under IS control.

Military co-ordination between the Kurds and Baghdad is very rudimentary. A joint emergency task force involving Baghdad, the Kurds and the Americans was set up a week ago, says Nuri. But here in the field, there is as yet no proper co-ordination. "Everyone defends his own territory," he explains. Reading between the lines of his account, it is evident how little the Kurds think of the regular Iraqi army. They abandoned not only Mosul but also the town of Jalula to the IS without firing a single shot, the colonel remarks drily.

In the Kurdish provincial capital of Erbil, which is a six-hour drive away, Helgurt Ali, the spokesman for the Kurdish Peshmerga, explains Iraq's current military situation. He enumerates all the fronts where fighting is currently taking place. And there are many. "Our forces are still assisting with the liberation of the Yazidi refugees in Sinjar. And in Jalula, we are still trying to keep the corridor open," he notes. Then he continues his list of place names: "Sumar, Rabia, Makhmur, Khaseh, Karkush, Kirkuk..." War is raging all over the Kurdish territories of northern Iraq.

Ali too pays tribute to the combat forces of the IS, frankly admitting that the Peshmerga are only able to hold their positions with difficulty. The past few days saw a balanced outcome. The Peshmerga recaptured locations while on the same day, the IS took new ones. "It's fairly even at the moment," says Ali, adding that one thing is certain at the moment: "This will not be a short war; it will go on for a long time." 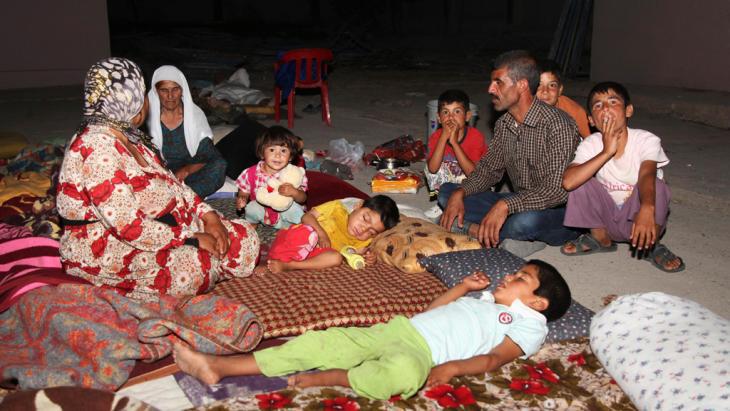 According to the UN, there are currently about 350,000 Iraqi and 220,000 Syrian refugees living in the autonomous Kurdish territories in northern Iraq. Pictured here: Yazidi refugees in Dohuk province

From war on a broad front to partisan tactics

Although the American air strikes might have weakened the advance of the IS for the time being, the tide of this war has not yet turned. Ali maintains that the effect of the air attacks was limited, partly because the IS has recently changed its strategy. "Whereas the IS began by attacking on a broad front, they changed their tactics once the air strikes began. Now they undertake a surprise advance in one location and withdraw overnight from another. These are partisan tactics that make things more difficult and unpredictable for us," he explains.

And there is something else that is worrying the Kurdish military. Once the IS seizes an area, only a portion of the local population remains there. "The population of Sinjar, for example, was not just 60 per cent Yazidis, who have now flown, it was also 40 per cent Arab Sunnis, who have stayed behind," he says. Many areas display the same ethnic mix. There have been numerous reports that local Sunni populations have been involved on the front lines in the ethnic cleansing and the killings, pillaging and looting of the religious and ethnic minorities in the villages. Neighbours have allegedly murdered neighbours.

"Some of them have certainly co-operated with the IS, maybe even the majority," believes Helgurt Ali. However, he also cautions against jumping to conclusions: "Who knows whether this was done because they genuinely sympathise with the IS or because these people were in reality afraid? A simple Sunni citizen cannot stand up to the IS fighters and deny them his support." That would be his death sentence.

Ali points out that the air strikes could mean that many civilians will be hit, which could in turn end up strengthening the bond between the local inhabitants and the IS. Instead of driving a wedge between the self-proclaimed holy warriors of the Islamic State and the local Sunni population, the opposite could then happen: the two sides might end up coming closer together as they both run for cover.

Home
Print
Newsletter
More on this topic
The Middle East policies of Europe and the US: Mistakes must not be repeatedPersecution of the Yazidis in Iraq: Don't abandon us! ISIS leader in Iraq: The new face of jihad?ISIS' cultural vandalism: A trail of destruction
Related Topics
'Islamic State' | IS, Jihadism | Jihadists, Kurds, U.S. policy in the Middle East
All Topics

Twenty years after 9/11, the world is faced with the dual challenge of Islamophobia and anti-Westernism. Ahmet Kuru argues that Muslims in the West, well versed in both Western ... END_OF_DOCUMENT_TOKEN_TO_BE_REPLACED

Two decades after the attacks of 11 September 2001, the West faces the shattered debris of its failure – not only in Afghanistan, but also in Iraq, Syria, Libya and Yemen. What ... END_OF_DOCUMENT_TOKEN_TO_BE_REPLACED

Twenty years after 9/11, the United States is recalibrating its war policy. However, its assertions that the era of endless wars is over are a myth, writes Maha Hilal END_OF_DOCUMENT_TOKEN_TO_BE_REPLACED

The coronavirus pandemic has turned lives upside down all over the world. In the Middle Ages, however, people lived with epidemics all the time. The best and most famous ... END_OF_DOCUMENT_TOKEN_TO_BE_REPLACED

While agreeing last week to a withdrawal of US combat troops from Iraq, neither Iraqi nor US leaders can admit publicly how much they need each other. By Cathrin Schaer END_OF_DOCUMENT_TOKEN_TO_BE_REPLACED

Reading Hassan Blasim's God 99 is an immersive experience of grief and exaltation, anger and disgust, writes Marcia Lynx Qualey. We join the Iraqi narrator as he sits around in ... END_OF_DOCUMENT_TOKEN_TO_BE_REPLACED
Author:
Karim El-Gawhary
Date:
Mail:
Send via mail

END_OF_DOCUMENT_TOKEN_TO_BE_REPLACED
Social media
and networks
Subscribe to our
newsletter