The famous mystic Ibn Arabi’s 61 poems have been translated into German for the first time by Stefan Weidner. But are the poems really all that easy to understand? By Marian Brehmer

Muhyiddin Ibn Arabi is one of the most profound and interesting personalities whose legacy has come down to us through Islamic culture. Ibn Arabi's work is staggering in its scope and difficult for laymen to understand; at least, so the commentaries on his Sufi tracts by both Eastern and Western scholars have said for centuries. It is this depth of meaning that lies behind the fact that Ibn Arabi’s works have seldom been translated into German – despite their author’s historic stature.

Stefan Weidner, an expert on Islam from Cologne and editor in chief of the cultural magazine "Fikrun wa Fann", takes a different view. At least when it comes to Ibn Arabi’s famous poetry collection, the "Tarjuman al-Ashwaq" (Interpreter of Desires). Weidner, who has been recognised for his translations from Arabic by the German Academy for Language and Literature, has translated Ibn Arabi's complete collection of poems into German for the first time.

The verses, as Weidner explains, have a modern, liberal character and can speak to us directly, without demanding any special prior knowledge from the reader. Guided by this conviction, he has produced an interesting translation: linguistically modern and freed from the literary rulebook, all in lower case and unpunctuated. Thus the reader is given the maximum space for his own interpretation, even if the reading experience requires a little getting used to – and, actually, some prior knowledge. 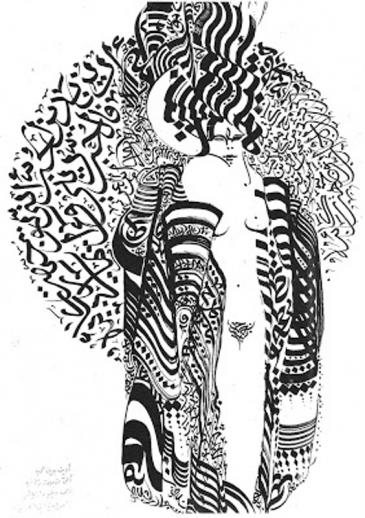 Ibn Arabi was a leading mystic and writer of the Islamic mediaeval period, on a par with Hafiz, Rumi und Omar Khayyam. Born in Andalusia, he travelled the length and breadth of the Arab world, as well as completing the hajj to Mecca. Over the centuries, his grave in Damascus has become a place of pilgrimage. His magnum opus, entitled ″The Interpreter of Desires″, has now been translated into German in full for the first time

Weidner advocates reading the poems as poems and letting them speak for themselves. He is critical of the approach taken by many translators of Ibn Arabi's verses, who he says interpret them according to a personal Sufi disposition.

This tendency has made the poems appear largely in the light of Islamic spirituality, he argues. But how far is it possible to "demystify" someone like Ibn Arabi, whose biography means that he stands for the spiritual heights of Islamic experiential mysticism like no one else?

Anyone familiar with Arabi’s world knows that all his writing is directed towards the recognition of the divine essence. Ibn Arabi was able to unite the contradictory phenomena of the world into a whole, in which every experience became a manifestation of the divine.

In Ibn Arabi’s own commentary on the poems – a reaction to outraged criticism from the orthodoxy – he explains: my verses deal in spiritual truths, even if they are clothed in the metaphors of profane love. Is this simply an exculpatory retraction from a writer forced into a corner? It hardly seems likely.

Not to be reduced to the romantic

The reinterpretation of theological themes and the way Ibn Arabi mixes them with worldly vocabulary, as addressed by Weidner, is not to be taken in the first instance as an act of literary provocation. It can only be understood in the context of the mystic’s experience of unity, which he expresses as a release from orthodox structures and contrasts.

Sufi poetry as the contemplation of God

For the Sufis, poetry has always been first and foremost the expression of an intense contemplation of God, even for poets like Hafez or Omar Khayyam, who take the game of seemingly profane metaphors (such as the famous references to wine and drunkenness) to extremes. In the Islamic tradition, poetry was always read aloud. This often happened in a fusion of poetry and hypnotic music, a practice that Sufis still use today in the search for transcendence.

For Ibn Arabi, the young Nizam is therefore on a more profound level an image of love itself and not, as the superficial interpretation suggests, just a person he adores. As the great French scholar of mysticism, Henri Corbin wrote, Nizam embodies God’s need to be recognised by His creation; the "hidden treasure" of the divine made manifest, as a famous Sufi hadith puts it.

Thus, while the uninformed reader of these translations catches at best a tiny glimmer of Ibn Arabi’s essence, he nevertheless has ample opportunity to construct his own way into the poems. This alone is a good thing, since any cultural counterweight to today’s ludicrous debates about Islam is welcome.

Giessen, Eichsfeld, Kusel, Berlin – cars bearing old German number plates are the latest trend on the streets of Cairo. Many Egyptians regard the discarded plates as chic. What ... END_OF_DOCUMENT_TOKEN_TO_BE_REPLACED

Tunisia has been going through a severe economic and political crisis in recent years. More than one in three young people there are unemployed. For many skilled, qualified and ... END_OF_DOCUMENT_TOKEN_TO_BE_REPLACED

German imams have publicly expressed their solidarity with the women of Afghanistan. In a letter of protest, the clerics say that the Taliban regime's decree barring women from ... END_OF_DOCUMENT_TOKEN_TO_BE_REPLACED

At the end of every year, the team at Qantara.de gives you a run-down of the ten most-read articles on the site over the past 12 months. Here is a quick overview of the stories ... END_OF_DOCUMENT_TOKEN_TO_BE_REPLACED

Social engagement is often motivated by religious factors. A new book explores the background to these community efforts and appraises how effective they are in helping to ... END_OF_DOCUMENT_TOKEN_TO_BE_REPLACED

The government in the Netherlands, one of the last European nations to abolish slavery, has made an historic apology. But some feel that there is still a long way to go. By Ella ... END_OF_DOCUMENT_TOKEN_TO_BE_REPLACED

Comments for this article: Interpreting desire

Is Weidner's translation of "Interpreter of Desires" available in print? Is it a book? What is the title? When will it be available? Thank you.

Ed: "Ibn Arabi - Der Übersetzer der Sehnsüchte" by Stefan Weidner is published by Jung und Jung - at this time unfortunately only in German!

END_OF_DOCUMENT_TOKEN_TO_BE_REPLACED
Social media
and networks
Subscribe to our
newsletter