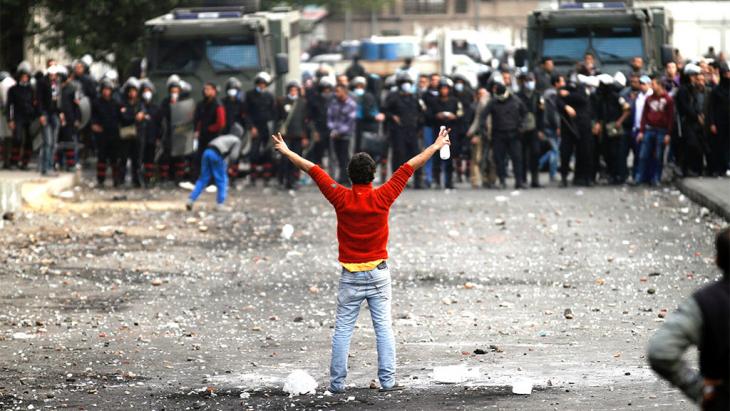 Civil war in Syria, a military regime in Egypt ... at first glance, it seems as if the Arab Spring has gone off the rails. But the battle is not over yet: 2014 will be a decisive year for change in the Arab world. An essay by Karim El-Gawhary

Three years ago, a joke did the rounds on Cairo's Tahrir Square. "Somebody told Mubarak that the people wanted to say goodbye to him. And Mubarak asked: Why? Where are they going?" It was of course Egypt's President Mubarak who eventually took his leave; the people stayed, initially brimming with hope, which has in the meantime been replaced by a heavy dose of disappointment.

In the West too, word soon got out that the Arab Spring had degenerated into an Ice Age. We in Europe often feel more than a little malice when we consider our neighbours on the southern and eastern shores of the Mediterranean, and we often like to pass judgment on what is happening there: "once again, the Arabs and Muslims couldn't get their act together; they are simply incapable of democracy".

Apparently, everything went wrong. A civil war is raging in Syria; a war that neither Bashar al-Assad nor the rebels are winning. Politically polarised, Egypt has reached a dead end, where the military hopes to at least impose a graveyard peace.

In Libya, obscure militias are setting the tone instead of the government. Even Tunisia has gone through a turbulent year, with the murder of opposition politicians and the desperate attempt to conjure up a kind of national unity. Only in the Gulf are things still quiet, but only because everything there is still under autocratic rule. 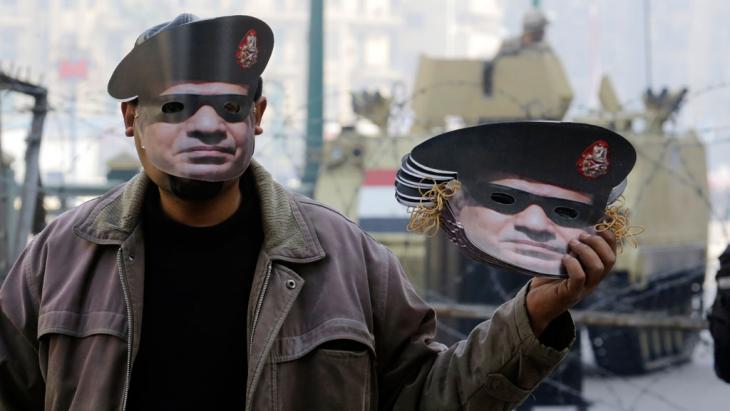 The mask of the field marshal: since President Morsi and the Muslim Brotherhood were ousted from power last summer, the leadership in Cairo under Field Marshal Abdul Fattah al-Sisi has become ever more authoritarian, arresting members of the Muslim Brotherhood, democracy activists and representatives of the media in the country

The belief that political and social processes follow the logic of the seasons is a myth. The Arab world is in the midst of a sea change. It all revolves around two major lines of political conflict: for one, the dispute between Islamists and liberals over the role of religion in politics. For decades, dictatorial regimes violently suppressed this debate. With their overthrow, the battle has now erupted in full force, as it arguably had to, because it is long overdue.

Arab societies need to negotiate what role religion should play in the state, in politics and in the law. Nowhere is there a social consensus on this issue, instead only two polarised camps that ultimately have to find a compromise. Whether this will happen with or without a bloody intermezzo remains to be seen.

The Tunisians have made the most progress in negotiating this conflict. They have not only formed a government of national unity, but have also managed the feat of agreeing on a constitution that can be considered progressive for the region.

In contrast, Egypt seems like a hopeless case, with the Muslim Brotherhood first using their electoral victory to single-handedly write a constitution while completely excluding the other side. Now, the other side is trying to do the same with the help of tanks.

After years of dictatorship, change in the Arab world has largely been hampered by political inexperience. Each side believes it can outsmart the other. There is no tradition of democratically negotiated compromise here.

Between revolution and restoration

The second political fault line in the Arab world runs between revolution and restoration. The old regimes consisted not only of a dictator, but also of an entire system that put down deep roots in the body politic and the security apparatus. 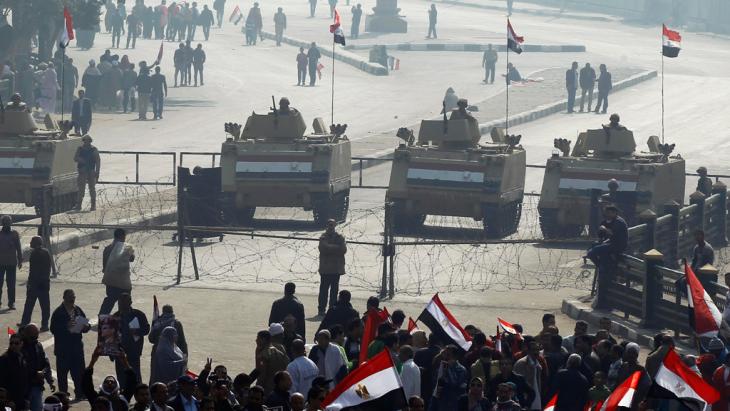 With the help of tanks and heavy armed vehicles, the army and Field Marshal Abdul Fattah al-Sisi are securing their grip on power and silencing any opposition in the country

The forces of restoration are once again at work everywhere. Their prime sponsors are the Gulf States and above all Saudi Arabia, which has no interest in a democratic experiment in North Africa and whose worst nightmare is an Islamist movement such as the Muslim Brotherhood that is legitimated by elections. Nothing poses a greater challenge to Saudi Arabia's autocratic system.

These two political fronts – liberal versus Islamist and restoration versus revolution – overlap to a certain extent in Egypt. So far, the marketing strategy for restoration and the security apparatus has worked relatively well, even though the supposed defender of freedom has taken away the people's freedom once again. But here too, a time bomb is ticking for the restoration side.

This is because the people expect the military and the security apparatus to find a solution to their economic problems and to open up the prospect of more fairness. The new principle of accountability will catch up with the restored regimes sooner or later.

The fact of the matter is that the old restrictive regimes were built on fear, and people today are no longer afraid. However, the same applies to the regimes, which in the case of Syria and Egypt are becoming increasingly ruthless and no longer care what the world thinks of them. They too are no longer afraid.

This in turn means that the West is left to watch and wait as a passive bystander while the Arab upheaval unfolds. Western powers don't seem to be able to make up their minds. Should they support the Islamists, now legitimated through elections, or the liberals, whose values are closer to their own, but who need an army to gain enough political weight? Is it better to support the legitimated but ousted leaders or the liberals in their tanks? 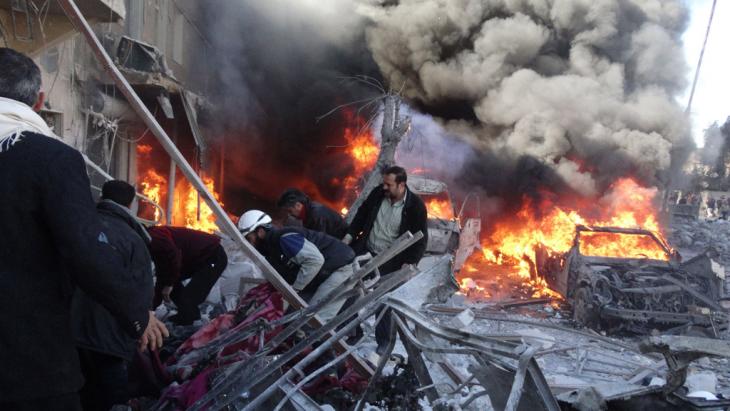 A merciless war against civilians: the US has condemned the use of barrel bombs in the Syrian civil war, with the US Secretary of State saying that their use was the "latest barbaric act of the Syrian regime". Such bombs, which consist of barrels filled with high explosives, have been dropped on the city of Aleppo in recent weeks by forces loyal to President Assad

Restoration governments and liberals have in the meantime become so closely intertwined that they are not really a suitable, positive counterbalance to the Islamists. And so the West continues to manoeuvre, trying to keep all doors open.

The new players these days are the regional powers Iran, Turkey and Saudi Arabia. The latter two, ostensibly Western allies, are pursuing their own agendas and have, for example, turned the conflict in Syria into a regional proxy war. If there is a solution to this problem, then the key is not to be found in Washington, Moscow or Europe, but rather in Tehran, Ankara and Riyadh.

The end of colonialism?

Perhaps the powerlessness of the West in the face of this period of radical change in the Arab world has finally ushered in the end of colonialism, the essence of which has always been to carve up the region into spheres of influence.

2014 will be a difficult but decisive year for these Arab upheavals. It will be turbulent and in all likelihood bloody too. The Tunisians will continue to work on their national unity, not least in view of the chilling example of polarisation in Egypt. For their part, the Egyptians are horrified by what is happening in Syria and will do everything in their power to make sure that polarisation in their country does not culminate in a civil war.

And the Syrians? They currently represent the end of the deterrence chain, certain of having reached the nadir, but facing the possibility that they might be stuck there for a long time. The United Nations announced this month that it can no longer count the number of people who have been killed in Syria. Up to now, Syrians have died namelessly; now their deaths don't even have a number.

The sea change taking place in the Arab world is bloody, turbulent and unstable, and the political players are politically inexperienced. The friction between liberals, Islamists, revolution and restoration is intensifying. But it is still a change, and that is the opposite of standstill. There is a saying in Arabic that goes "El Haraka Baraka" (movement is a blessing), which is why this chapter of Arab history cannot yet be closed.

Algeria‘s regime is again cracking down on anti-fracking activists and the unemployed in the country‘s south. Yet EU countries remain keen to scale up their energy cooperation ... END_OF_DOCUMENT_TOKEN_TO_BE_REPLACED

The murder of a female student at Mansoura University in the Nile Delta has sparked a long overdue debate on femicide in Egypt. Karim El-Gawhary reports from Cairo END_OF_DOCUMENT_TOKEN_TO_BE_REPLACED

Syria, Egypt, Saudi Arabia and the UAE are among those countries increasingly misusing cybercrime legislation to silence dissent and curb freedom of speech. Could a new global ... END_OF_DOCUMENT_TOKEN_TO_BE_REPLACED

Egypt hopes to jump-start the action needed to face a warming world when it takes the presidency of major UN climate talks in November, but warns that countries need a "reality ... END_OF_DOCUMENT_TOKEN_TO_BE_REPLACED

A ceasefire has been in effect in Libya for the past year and a half. Yet after Russia's attack on Ukraine, another proxy war looms in Africa's most oil-rich country. Mirco ... END_OF_DOCUMENT_TOKEN_TO_BE_REPLACED

It is the biggest order in the history of the Siemens Group: a 2,000-kilometre railway network for high-speed trains is to be built in Egypt. But the project raises numerous ... END_OF_DOCUMENT_TOKEN_TO_BE_REPLACED

Comments for this article: Some revolts just take longer

About Egypt: It's beyond ideology or political affiliation

The thing the author seems to have missed about the situation in Egypt, is that the fight at the moment is actually a generational fight between people who still believe in conventional politics, conventional parities (albeit Islamists or liberals) conventional mode of governance and the younger generations that want to see a change to all of that

The reason why it will take quite some time to see change here is due to the fact that these older generations still hold power and their positions in the government. It should be a reminder to everyone that the revolution was initially started by young people who mainly have no political affiliation and don't mind experimenting with democracy, politics and want to have greater freedom.

END_OF_DOCUMENT_TOKEN_TO_BE_REPLACED
Social media
and networks
Subscribe to our
newsletter