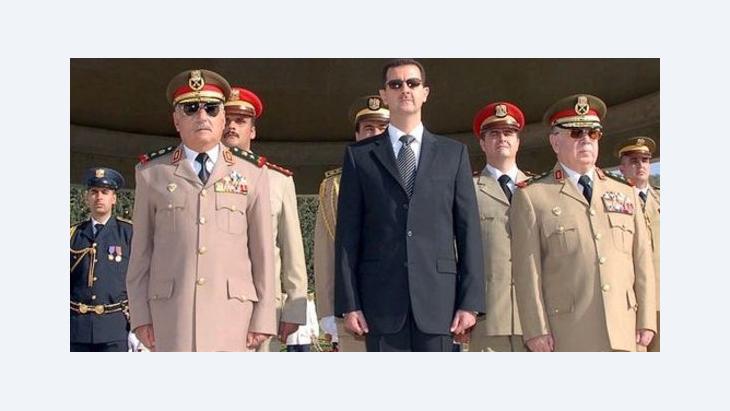 ﻿According to the writer Khaled Hroub, it's the Assad regime which carries the responsibility for the escalation of the violence in Syria: since the start of the initially peaceful revolution in the country, it is the regime which has driven the militarisation of the conflict. The regime has also split society along religious lines and destroyed the national structure of the country

The propaganda machine of the ruler and his sycophants, which uses terms like "firmness" and "resistance" to laud the regime, lists the same crimes, but blames them on the Syrian people and the revolutionaries.

So it's the regime which commits the real crimes, as well as political and moral offences – but it angrily brands the opposition as the criminals. It complains, laments, agitates and proclaims its own innocence. That's not exactly clever; it's a thoroughgoing moral degradation, such as dictatorships learn from one another in a way which calls forth disgust.

Where it is truly clever, however, is in the way it has managed to instrumentalise many players so that they have been led to praise the regime's "unshakable course" and repeat the claim that it has been facing a "strategic plan" aimed at its overthrow. 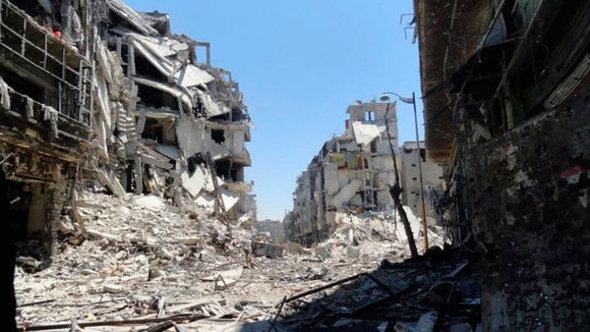 Military violence as a response to peaceful protest: "The whole population knew instinctively that the regime and the security forces were hoping that arms would start to be used, so that they would have the protesters where they wanted them," writes Hroub. Pictured: ravaged street in the city of Homs

Deliberate militarisation of the revolution

The first crime of which the regime is guilty is the militarisation of the Syrian revolution. The regime virtually drove the uprising to take up arms.

No-one with an ounce of decency can deny that, for months, the Syrian revolution remained peaceful both in its public pronouncements as well as in the methods it chose. The Syrians allowed themselves to be inspired by events in Tunisia and Egypt, where two dictatorial regimes were overthrown by peaceful protest and unarmed demonstrators.

Not only the elite but the whole population knew instinctively that, in each of these cases, and especially in Syria, the regime and the security forces were hoping that arms would start to be used, so that they would have the protesters where they wanted them. Wherever even one weapon was used, legions of security forces and tank units would be able to march forward, ready to destroy "armed terrorist gangs", as the Syrian regime and its propagandists call them.

And here too the dictators learnt from each other. They all saw peaceful protest movements as a provocation, since they constrain their brutal security apparatus, and deprive it of the argument that it has to react with an "iron fist". In such cases, they make weapons available for the general public and tempt demonstrators to use them during protests. 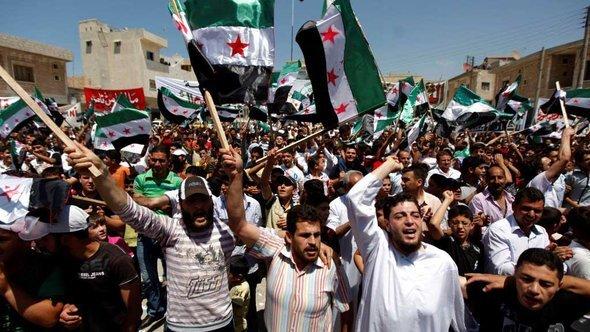 Protest modelled on the non-vioelnt uprisings in Egypt and Tunisia: "While peaceful demonstrations continued for months, the regime murdered and oppressed its opponents and militarised the protests for so long that they really did in the end turn into an armed uprising"

​​If this fails to work, then a couple of security officials are killed here and there, and the killings are blamed on "terrorists" and "infiltrators". After that the peaceful revolution can be put down with the most brutal armed violence. That's exactly the scenario which the Syrian regime has held to. While peaceful demonstrations continued for months, the regime murdered and oppressed its opponents and militarised the protests for so long that they really did in the end turn into an armed uprising.

Since then, Syria and the Syrians have been going through a dark time. The armed struggle can no longer be brought under control – either by the brutal attacks of the state or by the revolutionaries. This crime can be blamed firmly on the Assad regime, which is now complaining loudly that it is being opposed by armed groups, al-Qaeda terrorists, Salafists and Jihadists. But it's only the regime itself which is to blame for this development.

Breaking up the nation state

The second historic crime of the regime of Assad junior was the reintroduction of a criminal policy which his father had already adopted, under which the religious divisions of the country were consolidated and the national structure was destroyed. In this respect too, it will be possible to prove that those who initiated the revolution in its first months strictly rejected any religious slogans.

All observers agree that the Syrian revolution was a revolution of the whole people, as it still is. The revolutionaries still continue consistently to avoid any religious categorisation. But the regime is operating on the principle of "divide and rule", setting every religious and political group against the others, and it has played the entire register of religious agitation, with the aim that every one should take cover behind his own population group.

Initially, in this respect too, the Syrian instinct for reason and prudence and the people's concern for their country ensured that they could not be infected by the political depravity of the regime. But the regime deployed its Shabiha militia, which carried out a policy of murder in towns and villages with ethnically and religiously mixed populations.

That led quickly to divisions on religious lines. It was a natural development, since fundamentalist groups stemming from different parts of the world and different spiritual traditions were rubbing their hands and just waiting for the situation in Syria to tip over in their direction. 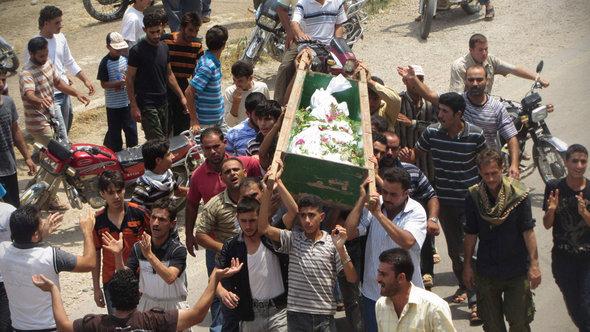 If there is foreign intervention in Syria, this too will be the responsibility of the Assad regime, says Hroub, since it has responded to all the people's demands for freedom with increasing bloodshed. Pictured: burial of a dissident in the city of Houla

​​These groups may have a different religion and a different ideology from that of the regime, but they are intellectually just as degenerate, and they divide people and countries into the same banal religious camps. The Assad regime is historically responsible for this swamp into which it has driven the Syrians. But the regime and its cheerleaders only ever blame the others for the new sectarianism.

Assad will be to blame if there is outside intervention

The third crime committed by the Assad regime is its provocation to the outside world to get involved. The regime has not listened to peaceful protest and has not taken any notice of the political initiatives of the Arab League or the United Nations. It has never looked seriously at the opposition, or seen the millions who stand behind the revolution. It has merely used such terms as "Western collaborators", "terrorists" and the like to describe them.

The regime's only answer to demands for freedom and dignity has been more bloodshed and more massacres, including violence against babies killed in their own homes. Thereby the Syrian regime has taken cover behind another equally inhumane and immoral government – that of Russia.

But the protection which it seeks from there cannot prevent the daily publication of yet more pictures documenting the crimes and massacres which the regime, unmoved, continues to commit. This indifference to the influence of the media is evidence of the stupidity of the fascist Assad regime, which obviously thinks it can avoid the revolution and remain in power in spite of all the blood which has been spilt. It obviously thinks that public opinion in the Arab world and across the globe will say nothing more about these crimes, merely because Russia is protecting it.

But the world is no longer living in the Cold War. In those days, a dictator like Pol Pot could murder a million or two of his own people, and the world looked on helplessly.

Syria is moving towards foreign intervention, and the reason for that will be Assad's crimes and his rejection of any peaceful solution or initiative. His regime will be to blame for that, even if his media and sycophants blame the opposition for the crimes he has himself committed.

The writer and media expert Khaled Hroub is director of the Cambridge Arab Media Project at the University of Cambridge. The second edition of his "Hamas: A Beginner's Guide " was published by Pluto Press in 2010. A new book on "Religious Broadcasting in the Middle East" will appear later this year.

Any reconciliation between Turkey and Syria’s Assad regime would have disastrous consequences for many Syrians, explains Syria expert Kristin Helberg END_OF_DOCUMENT_TOKEN_TO_BE_REPLACED

There are signs of an imminent normalisation of relations between Turkey and Syria. This would allow Erdogan to score political points domestically before the upcoming elections ... END_OF_DOCUMENT_TOKEN_TO_BE_REPLACED

As Syrian camps housing families of Islamic State fighters get more dangerous, there are calls to bring children out, even if the mothers don't want to go. The idea of separating ... END_OF_DOCUMENT_TOKEN_TO_BE_REPLACED

Where are the measures to deal with the looming challenges facing the Arab world? In this commentary, Marwan Muasher warns that the region is in grave danger of falling behind ... END_OF_DOCUMENT_TOKEN_TO_BE_REPLACED

At the end of every year, the team at Qantara.de gives you a run-down of the ten most-read articles on the site over the past 12 months. Here is a quick overview of the stories ... END_OF_DOCUMENT_TOKEN_TO_BE_REPLACED

Social engagement is often motivated by religious factors. A new book explores the background to these community efforts and appraises how effective they are in helping to ... END_OF_DOCUMENT_TOKEN_TO_BE_REPLACED
Author:
Khaled Hroub
Date:
Mail:
Send via mail

END_OF_DOCUMENT_TOKEN_TO_BE_REPLACED
Social media
and networks
Subscribe to our
newsletter