Skip to main content
The politics of the Pope in Iraq

When Pope Francis sets foot in Iraq, he will be breaking historic ground while manoeuvring religious and political minefields. So will his foremost religious counterpart, Grand Ayatollah Ali al-Sistani, one of the Shia Muslim world’s foremost scholars and leaders. By James M. Dorsey

The three-day visit contrasts starkly with past papal trips to the Middle East that included Turkey, Egypt, Morocco, the United Arab Emirates and Azerbaijan, states that, unlike neighbouring Iran, are more accustomed to interfaith interactions because of their Sunni Muslim history and colonial experience or, in the case of Shia-majority Azerbaijan, a modern history of secular and communist rule.

Unlike in Azerbaijan, Pope Francis is venturing in Iraq into a Shia-majority country that has been wracked by sectarian violence, in which neighbouring Iran wields significant religious and political influence, and which is home to religious scholars that compete with their counterparts in the Islamic republic. As a result, Iraqi Shia clerics often walk a tightrope.

Scheduled to last 40 minutes, Ayatollah al-Sistani’s meeting with the pope, a high point of the visit, constitutes a double-edged sword for a 90-year-old religious leader born in Iran who has a complex relationship with the Islamic Republic.

Ayatollah al-Sistani has long opposed Iran’s system of direct rule by clerics. As a result, he has eschewed executive and political authority while playing a key role in reconciling Iraqi Shias and Sunnis, promoting intertribal and ethnic peace, and facilitating the drafting and ratification of a post-U.S. invasion constitution. 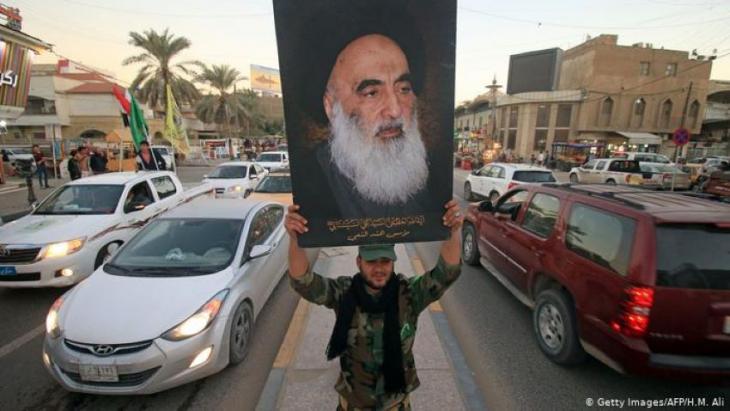 A 'private meeting': "To avoid controversy, Ayatollah al-Sistani is likely to downplay the very aspects of a meeting with the pope that political and religious interlocutors of the head of the Catholic Church usually bask in: the ability to leverage the encounter to enhance their legitimacy and position themselves as moderate and tolerant peacemakers," writes Dorsey

To avoid controversy, Ayatollah al-Sistani is likely to downplay the very aspects of a meeting with the pope that political and religious interlocutors of the head of the Catholic Church usually bask in: the ability to leverage the encounter to enhance their legitimacy and position themselves as moderate and tolerant peacemakers.

With state-controlled media in Iran largely refraining from mentioning the visit and Iranian Spiritual Leader Ayatollah Ali Khamenei claiming the mantle of leadership of the Muslim world, Ayatollah al-Sistani is likely to avoid projecting the encounter as a recognition by the pope that he is Shia Islam’s chief interlocutor, or that the holy Iraqi city of Najaf, rather than Iran’s Qom, is the unrivalled capital of Shia learning.

Sources close to Ayatollah al-Sistani, who rarely receives foreign dignitaries, have described his encounter on Saturday with the pope as a “private meeting”.

“Khamenei will not like it,” said Mehdi Khalaji, an Islamic scholar who studied in Qom and is a senior fellow at The Washington Institute for Near East Policy.

Critics are likely to note that Ayatollah al-Sistani was meeting the pope, but had failed to receive in December Iranian Chief Justice Ebrahim Raisi, who is touted as a potential presidential candidate in elections scheduled for June and/or as the successor to Ayatollah Khamenei. 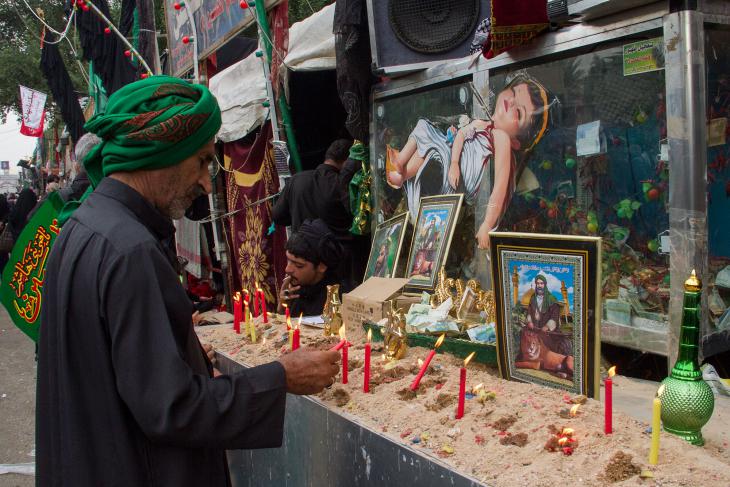 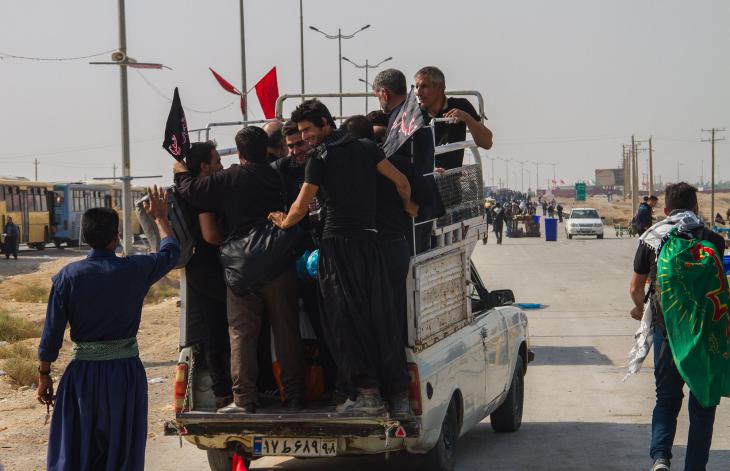 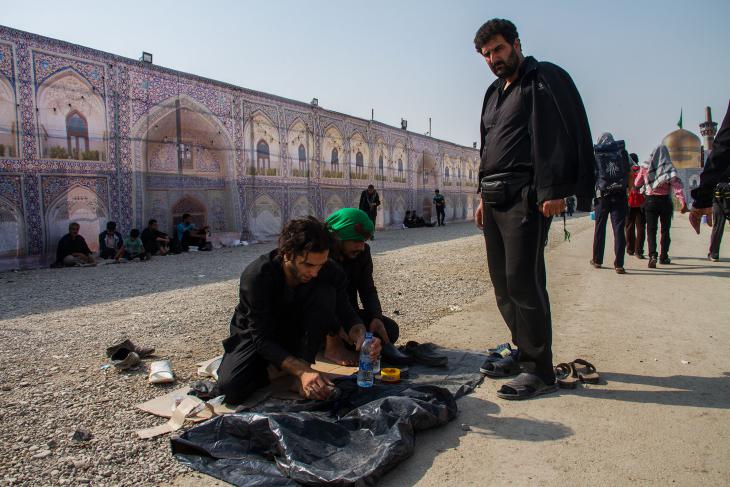 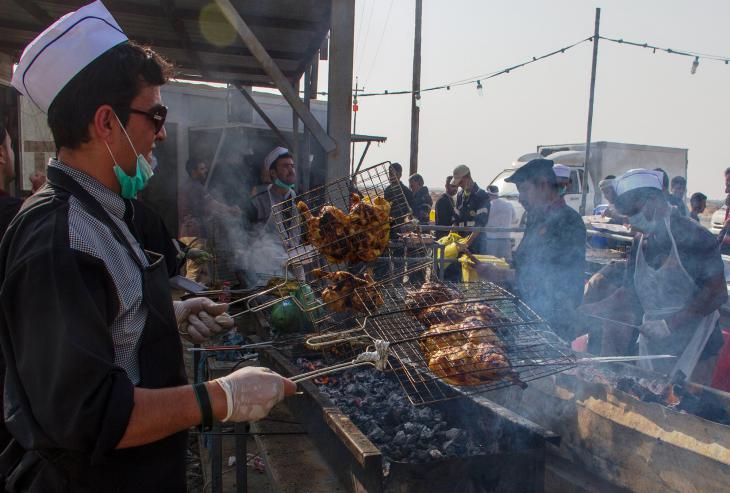 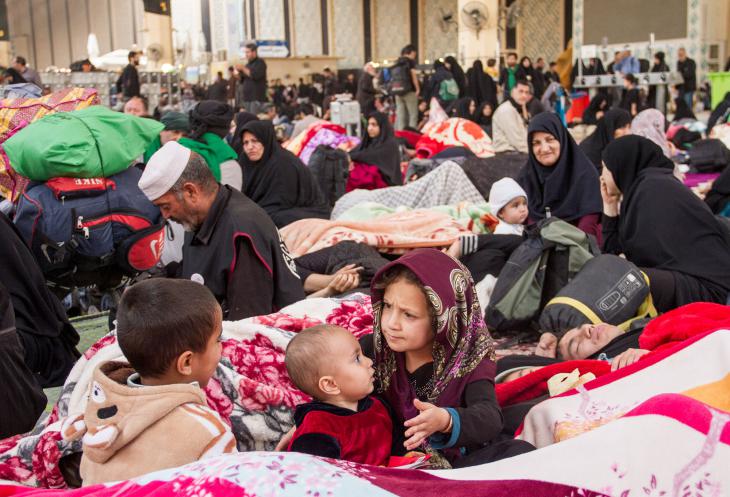 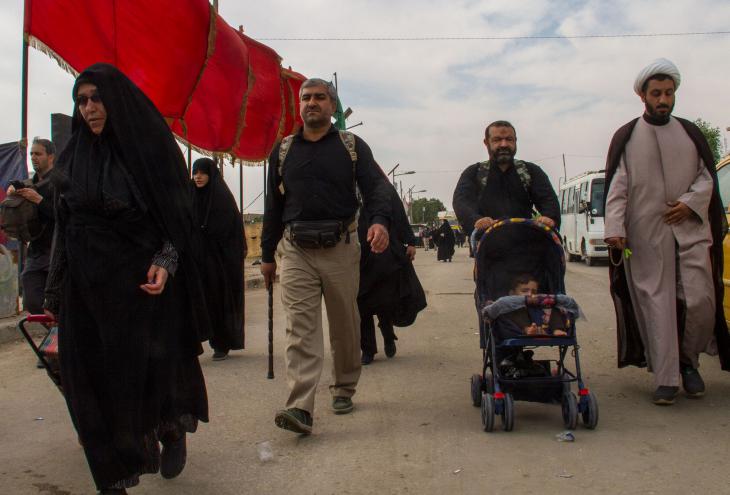 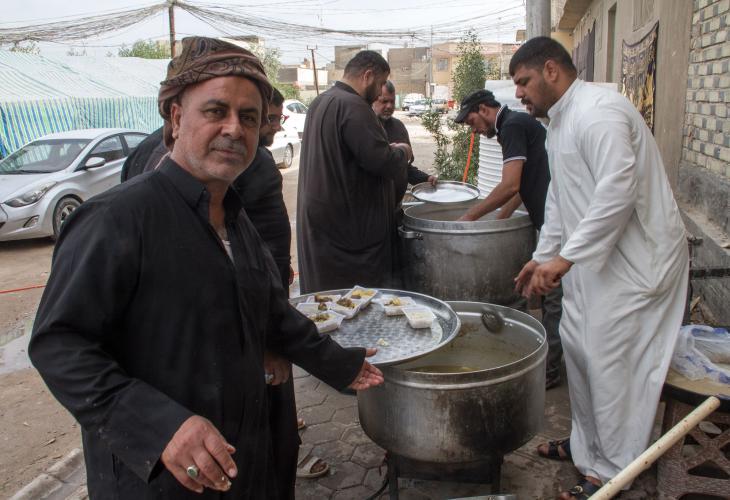 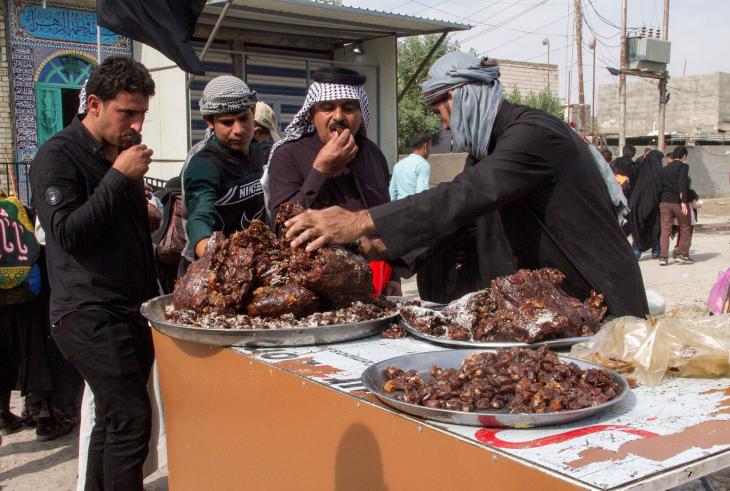 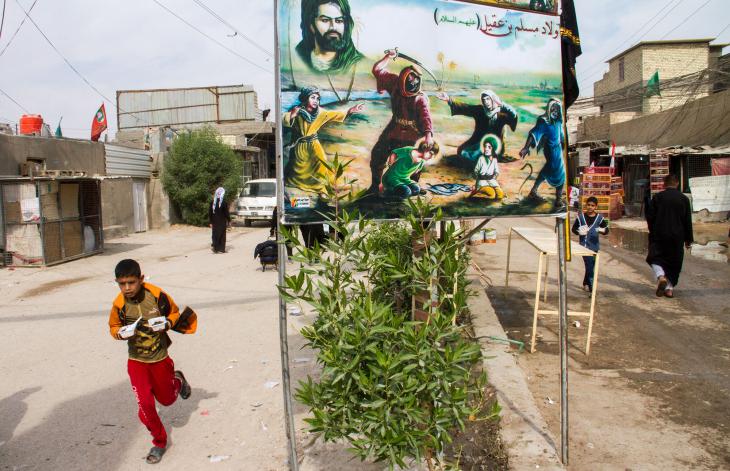 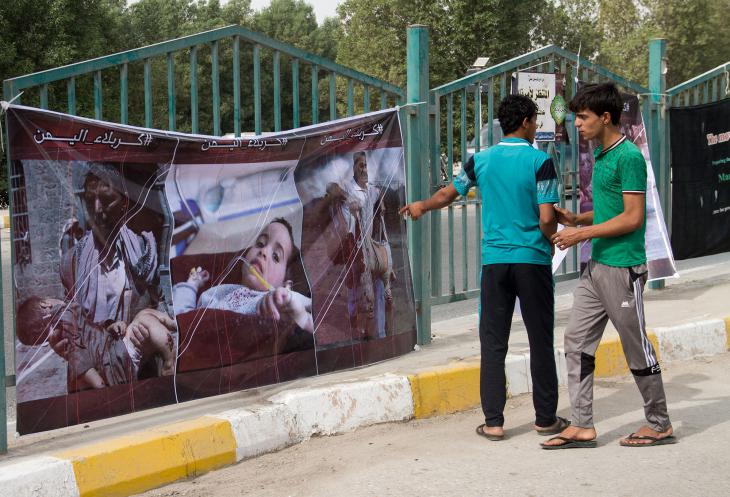 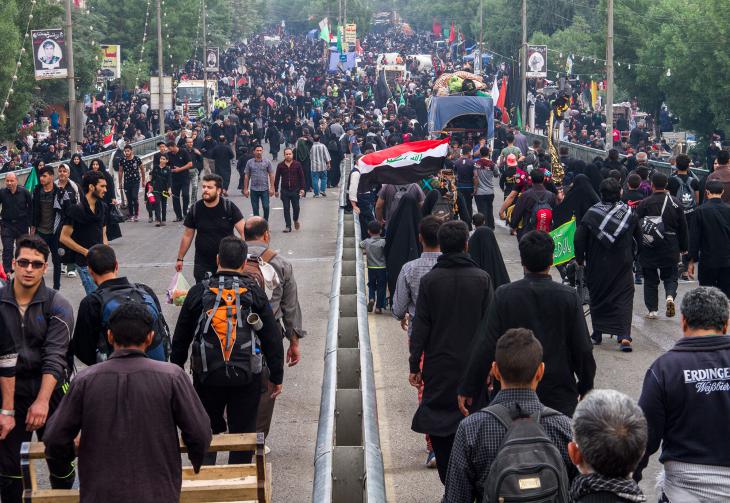 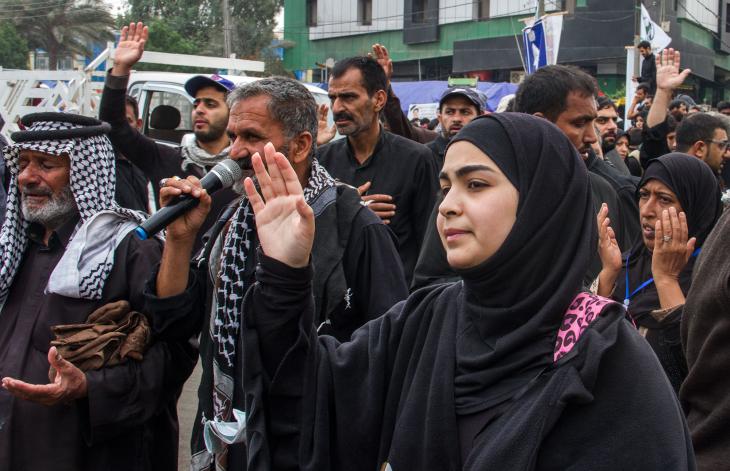 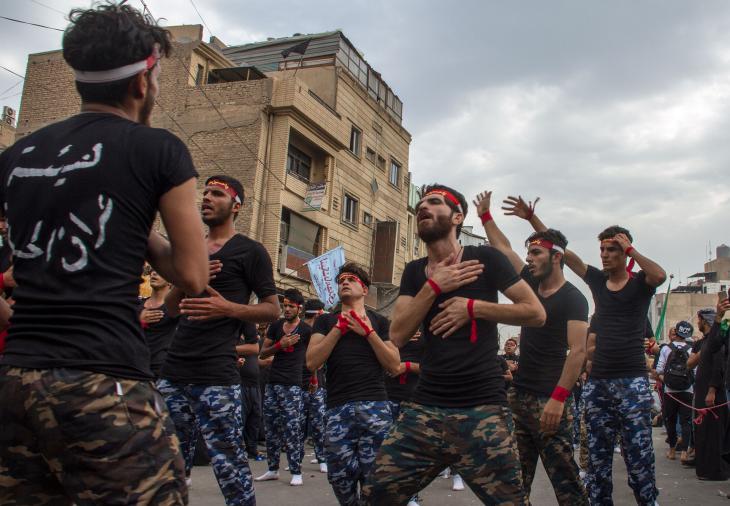 Khalaji noted that Iran has long downplayed Ayatollah al-Sistani’s significance that is boosted by the fact that he maintains a major presence not only in Najaf, but also in Qom where he has a seminary, a library, and a clerical staff.

Shia scholars suggest that is one reason why Pope Francis and Ayatollah al-Sistani are unlikely to issue a Shia-Christian equivalent of the Declaration of Human Fraternity that was signed in Abu Dhabi two years ago by the pontiff and Sheikh Ahmed el-Tayeb, the Grand Imam of Al-Azhar, the Cairo-based historic cathedral of Sunni learning.

“Al-Sistani does not want to provoke Khamenei. There is no theological basis to do so. Muslims cannot be brothers of Christians. Mainstream Islamic theological schools see modern Christianity as inauthentic. They view Jesus as the divine prophet, not as the incarnation of God and his son. In short, for official Islam, today’s Christianity is nothing short of heresy,” Khalaji said, referring to schools of thought predominant in Iran. “Sunnis are a little bit more flexible,” he added.

Khalaji noted further that Shia religious seminaries have no intellectual tradition of debate about interfaith dialogue, nor do any of the offices of religious leaders have departments concerned with interacting with other faith groups. “The whole discourse is absent in Shia Islam,” Khalaji said.

That has not stopped Ayatollah al-Sistani from maintaining discreet contact with the Vatican over the years.

In a bid to popularise the concept of interfaith dialogue, Pope Francis is scheduled to hold a multi-religious prayer meeting in Ur, the presumed birthplace of Abraham, revered as the father of Judaism, Christianity, and Islam.

The plight of Iraq's Christian minority

By the same token, Pope Francis, concerned about the plight of Christians in the Middle East and particularly Iraq that has seen the diverse minority shrink from 1.2 million before the 2003 U.S. invasion to at most 300,000 today, will want to build on the Shia leader’s past calls for protection of the minority faith group from attacks by militants and his condemnation of the “heinous crimes” committed against them.

The pope hopes that a reiteration by Ayatollah al-Sistani of his empathy for the plight of Christians could go a long way in reducing pressure on the community from Iranian-backed militias, which has stopped many from returning to homes they abandoned as they fled areas conquered by Islamic State.

The pope’s visit, little more than a month after a bomb blast in Baghdad killed 32 people and days after rockets hit an airbase housing U.S. troops, has sparked hope among some Iraqis that it will steer the country away from further violence.

That hope was boosted by a pledge by Saraya Awliyat Al-Dam (Custodians of the Blood), the pro-Iranian group believed to have attacked the airbase, to suspend its operations during the pope’ visit “as a sign of respect for Imam al-Sistani”.

Said Middle East scholar Hayder al-Khoei: “There will be no signing of a document, but both (Pope Francis and Ayatollah al-Sistani) are advocates of interfaith dialogue and condemn violence committed in the name of religion. The meeting will undoubtedly strengthen the voices and organisations who still believe in dialogue.”

Dr. James M. Dorsey is an award-winning journalist, a senior fellow at Nanyang Technological University’s S. Rajaratnam School of International Studies in Singapore and the National University of Singapore’s Middle East Institute, and author of the syndicated column and blog, The Turbulent World of Middle East Soccer.

The USA and NATO plan to withdraw from Afghanistan by September. The operation is risky, the outcome uncertain. Many Afghans fear civil war. The quake on the Hindu Kush will also ... END_OF_DOCUMENT_TOKEN_TO_BE_REPLACED

The Prophet Muhammad never executed anyone for apostasy, nor encouraged his followers to do so. Nor is criminalising sacrilege based on Islam’s main sacred text, the Koran. In ... END_OF_DOCUMENT_TOKEN_TO_BE_REPLACED

Surging coronavirus cases in many parts of the world have overshadowed the start of this year's Muslim holy month of Ramadan, with festivities once again curtailed by contagion ... END_OF_DOCUMENT_TOKEN_TO_BE_REPLACED

German Middle East analyst Guido Steinberg and television journalist Ulrich Tilgner have both published new books on the conflicts in the Middle East. Their analyses and their ... END_OF_DOCUMENT_TOKEN_TO_BE_REPLACED

On 27 March, Iran and China signed a 25-year accord intended to foster "strategic co-operation". Despite ongoing uncertainty over the deal's actual scope, content and chances of ... END_OF_DOCUMENT_TOKEN_TO_BE_REPLACED

Researchers agree that climate change alone cannot be blamed for the outbreak of war in Syria in 2011. However, neither can it be ignored as a reason this once blossoming country ... END_OF_DOCUMENT_TOKEN_TO_BE_REPLACED
Author:
James M. Dorsey
Date:
Mail:
Send via mail

END_OF_DOCUMENT_TOKEN_TO_BE_REPLACED
Social media
and networks
Subscribe to our
newsletter