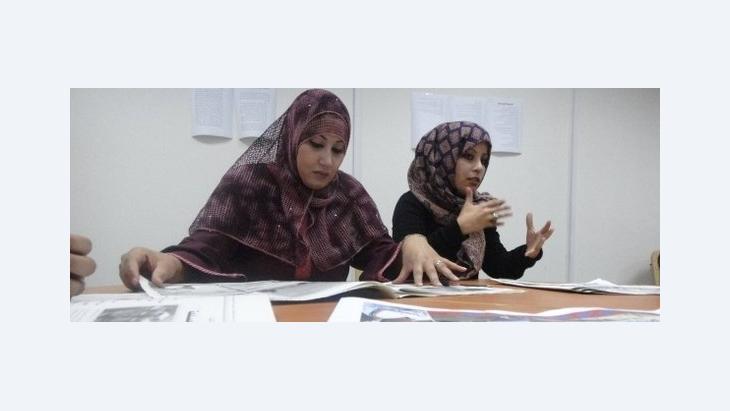 The Post-Gaddafi Era
Teaching and Learning for a New Libya

The state still does not have much of a presence in Tripoli. Instead, respected citizens are ensuring public order. Enthusiasts have set up new newspapers to educate the country's youth. Werner D'Inka reports

Sheikh Ali Al Adiq Asus is an important man in Tripoli. He is actually the most decisive figure in the city's Mansura district, assuming the role of arbitrator in disputes, chief administrator and, in effect, district mayor. It is not that he was elected to carry out these functions, but rather it is because of who he is. The imam is a respected and trusted figure in Mansura, and individuals like him keep public services running in the Libyan capital. There is no state or real administration, but the city still functions.

The police are nowhere to be seen? Instead, militiamen wearing inventive uniforms stand on the streets and wave their arms about. This doesn't improve the situation much, but the city's drivers are serene in their acceptance of the makeshift authorities. The city waste disposal workers have not picked up the rubbish for weeks? Then Sheikh Ali's people get on the job.

Residents of the 17 districts in the capital Tripoli – a city with 1.5 million inhabitants – have been forced to resort to self-help. Walls are plastered with admonitions like "Young people of Libya – respect private and public property!" and "Stop firing into the air! It is dangerous and traumatizes children." Civil society has taken control of the city and, remarkably, much seems to be functioning.

A desire to return to normality 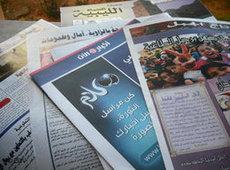 Freedom of opinion and the freedom to express these opinions are a new experience for Libyans: "After 42 years of dictatorship, we can now all have our own opinion," says one Libyan editor

​​Sheikh Ali knows, of course, that self-administration must someday come to an end. "Everyone has a job, a family, some task, and we all desire a return to normality. As soon as the state resumes its function, we will be glad to get back to everyday life," he says.

In the meantime, however, he holds things together in Mansura as best he can. Whoever has a conflict with their neighbour turns to Sheikh Ali. He listens to all sides and everyone accepts his wise judgements. He says that Libya does not need revenge now, but rather trust and reconciliation.

Reconciliation is a word that frequently comes up in the editorial room of the Libya Al Jadeeda (New Libya) newspaper. Editor-in-Chief Mahmud El Misrati sums up the content of the new weekly paper with the words "everything that can help Libya."

People urgently need reliable information on day-to-day matters – from security and food issues to the establishment of political structures. This is all spiced up with revelations about the overthrown dictator Muammar al-Gaddafi. The newspaper is open to all viewpoints except for those with "blood on their hands or who have lined their own pockets." Otherwise, the hope is that offering a public outlet to as many different points of view as possible will help lead to reconciliation.

"After 42 years of dictatorship, we can now all have our own opinion," adds one of the head editors. "We still have to learn to respect the opinions of others." Faisal Swehli, one of the publishers, said that the newspaper has already received offers of financial help from three political groups in exchange for editorial support. Yet, the paper wants to remain independent and serve as a balance to those papers financed by the National Transitional Council.

"We need a culture of reading"

Libya Al Jadeeda was founded by Swehli and Osama Swed in September. Swehli had worked as a representative of foreign companies in Libya, while Swed only returned to Libya from Tunisia at the start of the revolution. The two men knew each other from London, where they had lived for many years as neighbours. 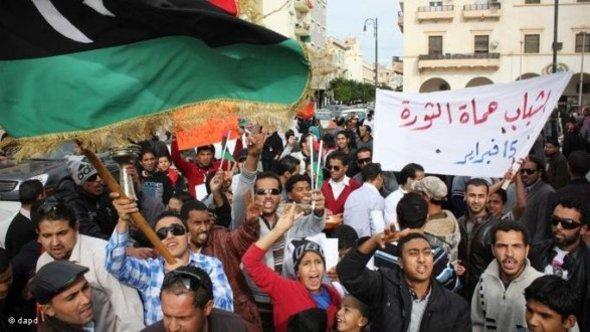 Fear of new clan rivalry and armed feuds between different militias: people in Benghazi took to the streets to demonstrate their support for the 15 February and the National Transitional Council in Libya

​​During the uprising against Gaddafi, they set up the Internet site "New Libya" in Tunisia. They were joined in their efforts by Mahmud El Misrati, a journalist known throughout Libya who was forced to flee the country under Gaddafi's reign. The website was one of the most important sources of information during the revolution, and El Misrati was placed on a death list by the regime.

But why publish a newspaper and not set up an online portal? "We want Libyan teenagers to read newspapers; after all, we need a culture of reading in our country," says Swed. This task, which is difficult everywhere else in the world, seems almost impossible in Libya. During the Gaddafi era, reading the boring state-controlled newspapers was simply a waste of time. As a result, hardly anyone reads newspapers anymore. Swehli and Swed are prepared to subsidize Libya Al Jadeeda until the paper can pay for itself. The first three editions were distributed for free, although now readers have to pay a half a dinar, around 30 cents, a copy.

The newspaper features some advertisements, but there are simply too few to cover the costs. In addition, circulation can't exceed 5,000 copies, because the printer is unable to deliver more. Nonetheless, in early November, the editorial staff was paid for the first time. However, it remains an uphill struggle: it is difficult to find good, trained journalists, there is a lack of printing facilities and no reliable distribution organization.

The only halfway functional newspaper printing house in Tripoli is in the hands the transitional government. According to Fathi Bin Isa, owner and editor-in-chief of the newspaper Arous al Bahr (The Bride of the Sea), it takes the printer two days to print 5,000 copies of his paper. And it is only with great effort that Libya Al Jadeeda manages to get a few hundred copies to Benghazi, Misrata and to the south of the country.

"The faces of the revolution"

He spent three futile years under the former regime trying to obtain a licence to publish a lifestyle magazine. As it seemed to him too frivolous to report on fashion trends during the revolution, he decided to publish a political journal instead. He gathered together about a dozen friends in Tripoli and Benghazi and they have been publishing the magazine on a voluntary basis without pay to this day.

There are already plans for an English-language edition of The Libyan. "Foreigners will soon be returning to Tripoli, and we are preparing an English version for them," says Shebani. He is working flat out to come up with an advertising concept. His editorial team plans themes in advance, which is not a common practice in Libya.

In March, the journal will publish a special edition entitled "Faces of the Revolution" featuring individuals chosen by the readers. The focus will not be on any one single person, instead the magazine will include some 30 or 40 portraits. "No one person made the revolution. It was all of us," says Shebani.

The final outcome of the revolution is still uncertain. There is an omnipresent fear that a "fifth column" of former regime supporters remains hidden and could strike back at any time. After a few relatively quiet weeks, fighting broke out again between militias in Tripoli. Some of these militias took part in the overthrow of Gaddafi, while others arrived in the capital later on – either not to miss out on the allocation of posts or "simply to be here as well," says Faisal Swehli. One of the most urgent tasks faced by the transitional government is to convince these militias to give up their weapons and return home.

"The vast majority of militiamen are young people between the ages of 18 and 25. They have experienced how they can unhinge a whole country with a weapon in their hand. Now they must learn to live a normal life," says Swehli. And to read a newspaper.

Cries of "Benghazi!" still resonate across the USA ten years after a deadly terrorist attack in Libya killed the U.S. ambassador and three other Americans. Ethan Chorin re-tells ... END_OF_DOCUMENT_TOKEN_TO_BE_REPLACED

After a two-year hiatus, the Arab League re-convened at the beginning of November in Algiers against a backdrop of uncertainty and discord. By Pierre Boussel END_OF_DOCUMENT_TOKEN_TO_BE_REPLACED

In the run-up to the COP27 global climate summit, hosted by Egypt in November, it is worth noting that little rainfall, aggressive heatwaves and worsening drought make the Middle ... END_OF_DOCUMENT_TOKEN_TO_BE_REPLACED

The southern shores of the Mediterranean Sea are losing sand faster than almost anywhere else. The ecological and economic damage is immense. The good news is, there are ways to ... END_OF_DOCUMENT_TOKEN_TO_BE_REPLACED

A ceasefire has been in effect in Libya for the past year and a half. Yet after Russia's attack on Ukraine, another proxy war looms in Africa's most oil-rich country. Mirco ... END_OF_DOCUMENT_TOKEN_TO_BE_REPLACED
Author:
Werner D'Inka
Date:
Mail:
Send via mail

END_OF_DOCUMENT_TOKEN_TO_BE_REPLACED
Social media
and networks
Subscribe to our
newsletter