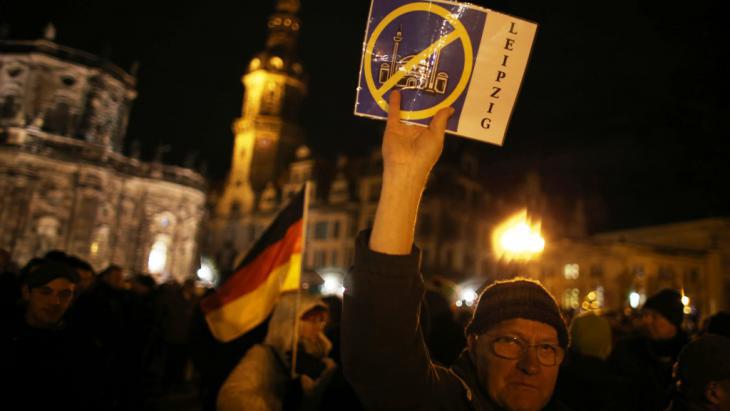 The psychology of Pegida

The craving for an enemy

There are hardly any Muslims in the German state of Saxony. But this is precisely what makes it possible for people there to create an image of Islam as the enemy. The Pegida movement is marching out of fear of something that exists in their imagination. An essay by Byung-Chul Han

There is a song by German superstar singer Helene Fischer called "Fehlerfrei" (Faultless). Translated literally, it goes: "Confused, chaotic, badly styled, that's how I seem to myself sometimes. Unexpected, inhibited, no sense of time, not quite at one with myself. I want to prove myself and I'm threatening to go off the rails, full speed into the wall. Catastrophic."

This song precisely articulates many Germans' state of mind. These days, many are tormented by nebulous fears: fear of failure, fear that they will amount to nothing, fear of falling behind, fear of making a mistake or making the wrong decision. For some time now, we've been living in a society of fear.

Many people are afraid that they won't live up to their own expectations. They find themselves in a state of permanent conflict with themselves. However, they blame only themselves for their failure. They are ashamed of their own inadequacy. This fear is not a fear of the menacing Other, of the enemy or stranger, but a fear for oneself.

In a guest contribution to the "Süddeutsche Zeitung" on 2 September 2014, entitled "Why no revolution is possible today", I wrote that the class war is turning into an internal battle with the self. Those who fail blame themselves and feel ashamed. People see themselves – not society – as the problem, despite the fact that the real problem is one created by politics.

People who blame themselves and are ashamed of their failure cannot form a mass of protesters who would question society, the system. Viewing the Other as the enemy also relieves the burden on the neo-liberal "performance subject" (Leistungsobjekt) that detects the enemy within himself and is battling with himself. 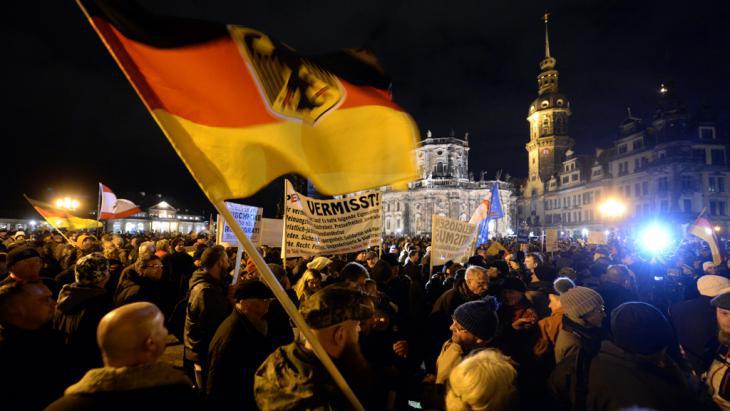 According to Byung-Chul Han, Pegida is using the logic of the scapegoat to allay its own fears and insecurities. Pictured here: a Pegida demonstration in Dresden on 22 December 2014. The organisers invited people to sing Christmas songs together on the square outside the world-famous Semperoper

Today's performance subject wears himself out fighting not external enemies but himself. Constructing an enemy out of the Other externalises this internal conflict, thereby relieving the burden on the psyche. In many places, therefore, people increasingly crave an enemy.

By constructing an imaginary enemy, they free themselves from the crippling fear of being left behind or of no longer belonging. Pegida (Patriotic Europeans against the Islamisation of the West) opens up this kind of imaginary realm in which the fear each individual has for or about himself is externalised and occupied by another object – in this case, Islam.

What is particularly striking about the Pegida participants is that they march in silence. They formulate no goals; they make no concrete demands. They refuse to talk. The reason is obvious: they don't want to allow themselves to be forced out of the imaginary realm.

There is little point in trying to bring them back to reality by pointing out to them that there are hardly any Muslims in Dresden, that Islamisation is simply not an issue. They retreat from reality in order to protect their imaginary realm, which for them is a liberating one. They will therefore aggressively defend themselves against all attempts to bring them back to reality. It is a form of denial that could only be accessed by a psychoanalyst. 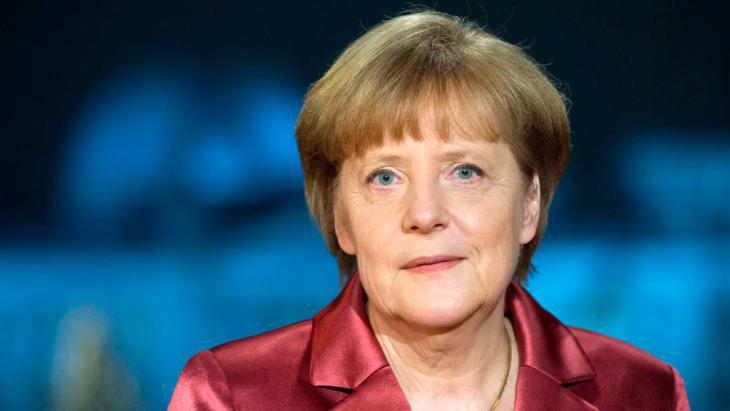 "If Angela Merkel continues to speak only of the 'agitation' against foreigners, she has understood nothing. The real problem is not xenophobia but the growing uncertainty and fear felt by people," writes philosopher Byung-Chul Han

The protesters are externalising their fear by applying it to the imaginary enemy. Again it is the logic of the scapegoat that comes into play here. Once it was the Jews, now it's the Muslims. History is repeating itself. The politicians just look on and content themselves with diagnoses from afar – or they stoke the fear in order to make political capital out of it.

They should really count themselves lucky that the protesters are directing their anger against the imaginary enemy and not against them. Pegida is the distorted image of a society in which politics has failed. People are retreating into the realm of the imaginary to create for themselves the sense of having a place in society again.

If Angela Merkel continues to speak only of the "agitation" against foreigners, she has understood nothing. The real problem is not xenophobia but the growing uncertainty and fear felt by people. The disappearance of trust in society is also cause for alarm. Many feel that they no longer belong.

If these fears are not addressed politically, they break through in the realm of imagination. It is in precisely this imaginary realm that xenophobia flourishes. Above all, Pegida signifies the failure of politics. Angela Merkel is just concealing this when she issues warnings about xenophobia.

The fact that there are hardly any Muslims in Saxony is precisely the reason why Islam can be built up into a bogeyman here – a bogeyman that rallies people from various different groups. In the western part of Berlin this would not be possible, because Muslims are already a reality there – a reality that poses no real threat. The imaginary flourishes where the reality is not present. 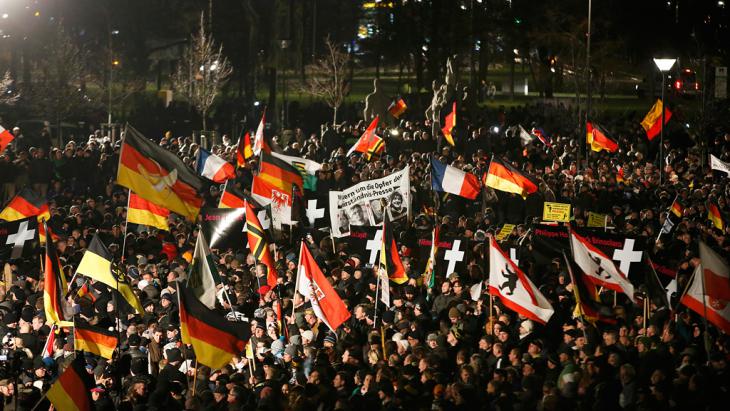 "People are marching against a bogeyman in the realm of imagination": supporters of the Pegida movement demonstrating in Dresden on 12 January 2015. "The fact that there are hardly any Muslims in Saxony is precisely the reason why Islam can be built up into a bogeyman here – a bogeyman that rallies people from various different groups," writes Byung-Chul Han

The enemy is the embodiment of our own issues

Confronting the imaginary enemy is Pegida with its slogan "We are the people". Just like Islam, "the people" in this case are also located in the imaginary realm. People who are unsure of themselves, who feel they no longer belong, experience an identity crisis. They therefore claim "the people" as an authority that provides identity. The construction of an enemy also provides an identity.

This was recognised by the philosopher and political theorist Carl Schmitt: "The enemy is our own question given form. This is why I have to engage with and fight it in order to acquire my own measure, my own limits, my own form." The only problem is that in the case under discussion here, the enemy is located in the imaginary realm. It is not, therefore, possible to "fight" it. There is no path from the imaginary enemy to one's own form, one's own identity.

It is not only in Dresden that people feel insecure and plagued by nebulous fears. In western Germany, however, it isn't easy to build up Islam as an imaginary enemy because reality tells a very different story. If, however, they were also to succeed in creating an imaginary realm, it would be possible to mobilise crowds of protesters here too. So is a revolution possible after all? Probably only in a perverted form. People are marching against a bogeyman in the realm of imagination.

The philosopher Byung-Chul Han teaches at the Universität der Künste in Berlin. His most recent book is the collection of essays "Psychopolitik: Neoliberalismus und die neuen Machttechniken" (Psychopolitics: neoliberalism and the new techniques of power).

Home
Print
Newsletter
More on this topic
The sudden rise of Germany's Islamophobic Pegida movement: "The product of a nervous society"Immigration and the new class divide: Feeding on people's grievancesResistance to Pegida: "Intolerance must not be tolerated"The perception of Islam as the enemy: When fear creeps in
Related Topics
Front National, Islam in Germany, Islamophobia, Migration in Germany, Muslims in the West, Pegida, Xenophobia
All Topics

Mikhal Dekel’s father was part of a contingent of Jewish children who went on an odyssey from Poland to Iran as a result of the Holocaust. Dekel has now written a book exploring ... END_OF_DOCUMENT_TOKEN_TO_BE_REPLACED

The protests against police violence in the USA have triggered a discussion in Germany about discrimination, immigration and the country's image of itself. Why are people who do ... END_OF_DOCUMENT_TOKEN_TO_BE_REPLACED

Journalist Michel Abdollahi was born in Tehran in 1981 and moved to Hamburg in 1986. His big breakthrough came with his television documentaries on social issues such as ... END_OF_DOCUMENT_TOKEN_TO_BE_REPLACED

From Syrian war crimes to U.S. hypocrisy in the Julian Assange case, the global "erosion of human rights standards" is of critical concern, UN Special Rapporteur on Torture Nils ... END_OF_DOCUMENT_TOKEN_TO_BE_REPLACED

Iran’s contemporary poets are less well known in Germany than the old Persian classics. Kurt Scharf has now translated 32 of them into German. Marian Brehmer dipped into the ... END_OF_DOCUMENT_TOKEN_TO_BE_REPLACED

END_OF_DOCUMENT_TOKEN_TO_BE_REPLACED
Social media
and networks
Subscribe to our
newsletter