Skip to main content
The Reception of the Other

Western Painters of the Orient, Orientalists in the East

In two books that cast light on the history of the reception of the Orient and the Occident, the New Yorker Kristian Davies looks at images, while the Egyptian Muhammad Immara studies texts. Wolfgang G. Schwanitz reports 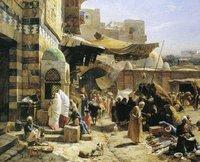 Beauty or fakery? "Market in Jaffa" by Gustav Bauernfeind

​​While the American examines 19th-century Western painters of the Orient, the Egyptian challenges Western attacks on Islam by presenting citations from 32 Western scholars. Muhammad Immara also attempts to show that Islam represents the highest development of monotheistic religion.

In the introduction to his splendid illustrated book, Kristian Davies describes the Orientalist painters’ rare gift of capturing wonderful motifs. These were artists who travelled to the east and preserved a record of the pre-modern era in their work.

Davies found their paintings in 60 institutions in ten countries. It is a pleasure to leaf through the book, especially as the paintings are so perfectly laid out and competently discussed.

The author has selected images of deserts and caravans, streets and markets, warriors and women, places of worship, people at prayer and people taking their pleasure. The title page shows "Pilgrims on their way to Mecca", a masterpiece by the Frenchman Léon Belly, and the book also contains works by – for example – the German Gustav Bauernfeind ("Market in Jaffa") and the American James Fairman ("A View of Jerusalem"). Davies introduces us to the life and work of these and other artists.

Arthur Rimbaud, Jean-Louis Burckhardt, Sir Richard F. Burton, Jean-Léon Gérôme, James Tissot and Jane Digby el-Mezrab also appear in this splendid volume. Davies captures a Golden Age that extended from 1800 to 1900; but, for him, the Orientalist painters are part of the Enlightenment. 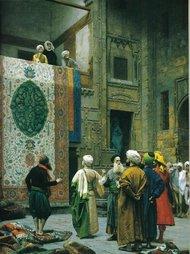 "The Carpet Merchant" by Jean-Léon Gérôme - For Kristian Davies, the Orientalist painters were part of the Enlightenment

​​In the period under study, says Davies, the Orient – which stretched from Morocco to Persia and India – was seen as a place of great and colourful diversity; yet there was also a certain uniformity to this exotic attractiveness. Nonetheless, he maintains, the painters who travelled eastwards were innocent of any intention to warp the truth.

In 1978, Edward Said’s "Orientalism" described the Western conception of the Orient as sheer invention. From linguists to archaeologists, Said argued, Westerners had presented a false and misleading image of the exotic East.

Kristian Davies sums up Said’s argument (somewhat briefly) as the assertion that centuries of Orientalist studies had been nothing more than techniques of espionage and methods of oppression – in short, means of serving the West.

Certainly, Davies admits, Said made some fascinating discoveries in the field of literature; yet he admonishes Said for seeing Western guilt everywhere and for developing an extremely hostile attitude. Davies argues that a younger generation of authors extended Said’s polemical critique to include Orentalist painting of the 19th century, in which they discovered a plethora of untruths.

In these paintings, Linda Nochlin and others believed they could discern sexism, racism, chauvinism and a host of other "isms". Davies argues that these writers had hastened to link the artworks to the process of colonial expansion.

The 80s were the decade of deconstruction, and Orientalist paintings were under attack from all sides. It was argued that the painters were merely a part of the imperialist project: inauthentic, lacking in any higher artistic ambition, and prejudiced against the East before they had even visited it.

There was also widespread adverse criticism of the representation of women. Davies sees the Saidian style as an intellectual defect. He opposes it by defending the high art of the Orientalist painters, insisting that a beautiful painting may also be called beautiful. Kristian Davies wishes to rehabilitate these painters, to rescue them from Said’s disparagement.

The Superiority of Islam

Muhammad Immara wishes to rehabilitate other objects of Said’s criticism: he praises the Orientalist writers of the West, using their texts as examples to support his belief in the superiority of Islam.

"A View of Jerusalem" by James Fairman – an image of sexism, racism and chauvinism?

​​Immara has divided his book into three sections. In the first part, he sketches the "true" Islam; in the second, he castigates the anti-Muslim Crusade carried out by the West since September 11th 2001; in the third, he quotes 32 Western scholars who have written about Islam. These include William Montgomery Watt from Scotland, Arnold Joseph Toynbee from England, Sigrid Hunke from Germany, and Bernard Lewis from the USA.

Some of Immara’s statements about and evaluations of these writers are false or dubious; he has not researched their lives carefully enough. His selection of texts is also problematical, for Toynbee and Hunke were never regarded as Orientalists. It is at times not even clear where certain quotations begin and end.

Immara takes passages that suit him and combines them to create a decidedly rosy picture of Islam. Nonetheless, his work deserves widespread attention. For one thing, he does not slander Orientalists in the Saidian style; he recognises their achievements. This unites him with Davies, whose work is distinguished by its conscientiousness and accuracy. And although Immara hopes his work will drum up support for Islam, widespread discussion will also temper the book’s reception.

Leopold Carl Müller
Sand in the Bristles
European painting took to the Orient in the nineteenth century. Egypt in particular was considered the dreamland of many artists. An exhibition in Vienna is now showing the work of the prodigious painter of the Orient, Leopold Carl Müller. Niklaus Maak took a look at the exhibition

END_OF_DOCUMENT_TOKEN_TO_BE_REPLACED
Social media
and networks
Subscribe to our
newsletter