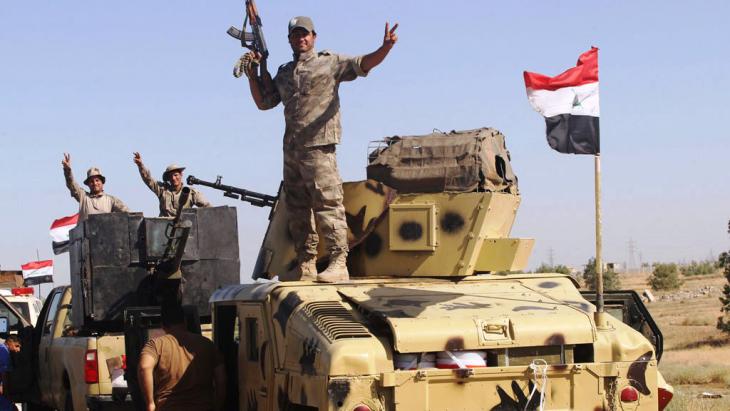 The reconquest of Fallujah
The serpent′s head

Last week Iraq′s prime minister, Haider al-Abadi, announced victory over the "Islamic State" terror militia in Fallujah and the liberation of the city. But following the advance of government forces into the centre of the western Iraqi IS stronghold, the refugee crisis in the region is worsening. The mass exodus from Fallujah continues, with people still leaving in their thousands. By Birgit Svensson

The residents of Fallujah are leaving in panic. They are fleeing the city in their thousands. Scattering in all directions. The word on the street is – just get out. Aid organisations have set up tent camps in the surrounding area, but also further afield. Some refugees are so traumatised that they hurry on, say aid workers – driven on by a perpetual sense of fear that they were followed and might be killed.

A considerable number arrive 40 kilometres away in the city of Ramadi, which has been almost completely destroyed and which was deemed to be wholly free of the IS terror militia just last March. There are increasingly frequent accounts that most of the refugees are malnourished.

The Iraqi army had imposed a siege ring around Fallujah since February, allowing nothing through, not even food. The strategy was to starve them out. The idea was that the residents of Fallujah would themselves revolt against IS. But the tactic did not pay off. The brutal jihadists mowed all those down who stood in their way. The mass grave found by Iraqi soldiers in a suburb of Fallujah is proof of this.

The hunger reached dangerous levels, the first people died of malnutrition. Some report that at the end, all they had were a few dried dates. In April, they counted almost 200 deaths from starvation. Political pressure grew. Iraq's Shia Prime Minister Haider al-Abadi had to field accusations that he was deliberately allowing the majority-Sunni city to starve. He finally issued the order to attack at the end of May. 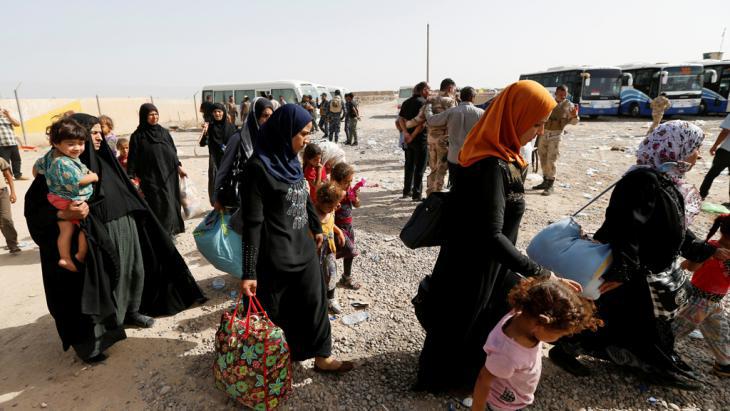 Flight from Fallujah: since the start of the Iraqi army offensive to recapture the IS-controlled city around one month ago, refugee aid agencies say more than 60,000 people have fled Fallujah. It is thought that 30,000 people have fled since last Friday alone. The UNHCR puts the number even higher, saying that up to 84,000 residents have escaped since late May

But it would be almost a month before the army moved in to Fallujah, after arduous positional battles near the largest city in the province of Anbar initially failed to secure any progress. But although army leaders and the prime minister say that 90 percent of Fallujah has now been liberated, people are still fleeing the city in their masses. It's not true, say the Americans. A Pentagon spokesman in Washington says that only a third of Fallujah is in the hands of government troops.

But the controversies surrounding the coefficients of the recapture are not the crucial reason why 65,000 people have now fled Fallujah. The mass exodus following the opening of the gates comes in response to the months of siege. Then there is a profound mistrust, harboured by most of Fallujah's former 350,000 residents against everyone and everything. "Most of us just want to get away," report refugees from Fallujah in Ramadi, "to get out and never return". They estimate that around 30,000 are still in Fallujah.

Many Iraqis refer to Fallujah in symbolic terms as the head of the serpent, because this was the place where the jihadists began their triumphal sweep of Iraq. At the end of January 2014 they patrolled the city, hoisted their black flags on all public buildings and appointed a governor straightaway.

The city of mosques became the first IS stronghold, the first hotbed of Sharia ideology, the heartland of the Caliphate – just 50 kilometres from the capital Baghdad.

When Fallujah fell into the hands of "Daesh", it was another five months before the holy warriors overran Mosul and Tikrit. In Fallujah, suicide bombers were trained and sent to Baghdad and the rest of Iraq, bomb-making workshops were set up and uniforms made for the fighters. Supply routes to Syria were established from Fallujah, from whence the entire province of Anbar was gradually captured. At times, the grim fellows felt so secure that they sent their fighters there after they got married: for a honeymoon in Fallujah.

In previous years, Fallujah was the centre of the Sunni resistance to the post-war order in Iraq. The Sunnis rallied against the systematic discrimination suffered during the administration of the Shia Prime Minister Nuri al-Maliki. They initially regarded the jihadists as their allies. But the Sunnis soon realised that the holy warriors were pursuing quite different goals to those they had suspected at the outset.

To this day it is not possible to say that IS has lost Fallujah in its entirety, even if the liberators have managed to advance right into the centre of the city and the Iraqi flag is again flying on the roof of the main city administration building and the hospital. After all, whether the terror militia will be wholly driven out of the city and whether urban normality can be restored in Fallujah, is not only dependent on the military might of the anti-IS alliance.

Observers of the developments in Iraq agree that without a viable political strategy, a military victory will not be durable. The Shia-dominated government in Baghdad must offer the Sunnis of Fallujah and beyond a perspective that convinces them to return to their cities, reconstruct them and to be equal participants in their nation's political process. Otherwise there is a risk that the people will again fall into the hands of IS, which is in any case presenting itself as the avenger of the Sunnis. 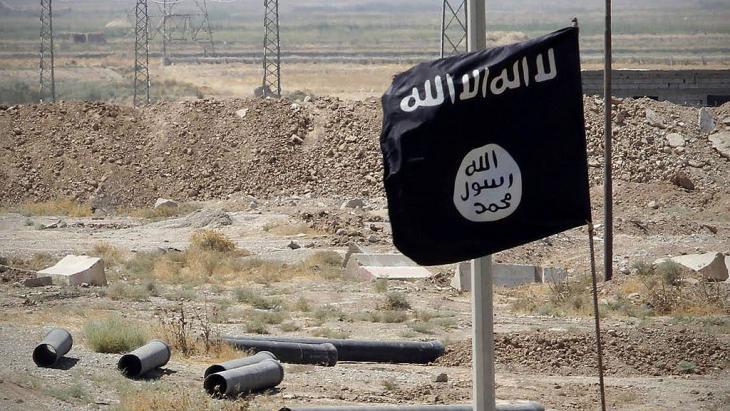 Partial victory over the jihadists: "to this day it is not possible to say that IS has lost Fallujah in its entirety, even if the liberators have managed to advance right into the centre of the city and the Iraqi flag is again flying on the roof of the main city administration building and the hospital. After all, whether the terror militia will be wholly driven out of the city and whether urban normality can be restored in Fallujah, is not only dependent on the military might of the anti-IS alliance," writes Svensson

The liberation of Fallujah is possible, even if it will take longer than predicted by the Iraqi government. The IS military leader Abu Wahib, also known as the Emir of Anbar, is dead along with more than 1,000 other IS fighters. The interplay between Iraqi army, Sunni clan leaders, Shia militia and the Americans has obviously improved considerably. The shared supreme command is working.  But the crucial question will be what the liberators do with the liberated. Will the Shias take revenge on the Sunnis of Anbar, which they all too often pigeonhole as IS sympathisers?

The wounds of the civil war of 2006/07 and 2008, when Shia and Sunni Iraqis killed each other, have not yet healed. The scars are threatening to burst open again. The example of Ramadi has become the horror scenario that is also striking fear into the hearts of the inhabitants of Fallujah.

When the many refugees from the fighting in the provincial capital fled southwards at the beginning of the year and arrived on the border of the province of Kerbela, revenge-hungry Shia militiamen were waiting for them at Razaza, took mostly the men as prisoners, accused them of collusion with IS and demanded a ransom for their release.

Bachtyar Ali sends the hero of his latest novel – "Mein Onkel den der Wind mitnahm" – literally flying. Jamshid is so thin after his years as a political prisoner that a gust of ... END_OF_DOCUMENT_TOKEN_TO_BE_REPLACED

For a century, the Kurds and other minorities in Turkey have been subject to state repression. With his dissertation "The Kurdish Question in Turkey", political analyst Ismail ... END_OF_DOCUMENT_TOKEN_TO_BE_REPLACED

Written by the controversial Kuwaiti Shia preacher, Yasser Habib, the film's plot pursues two threads: one from the Islamic past, the other from the present. The narratives meet ... END_OF_DOCUMENT_TOKEN_TO_BE_REPLACED 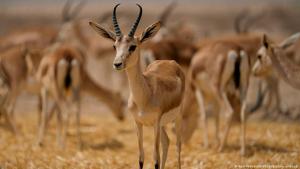 Gazelles at an Iraqi wildlife reserve are dropping dead from hunger, making them the latest victims in a country where climate change is compounding hardships after years of war END_OF_DOCUMENT_TOKEN_TO_BE_REPLACED 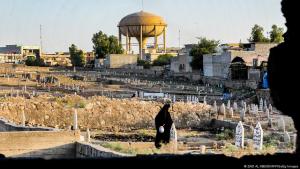 The "Islamic State" group is gone, but many of their Iraqi victims are still missing. They may well be buried in mass graves the extremists left. But critics say exhumations are ... END_OF_DOCUMENT_TOKEN_TO_BE_REPLACED

A law has been passed by the Iraqi parliament that criminalises any contact with Israel. In the midst of heated debates on the subject, one crucial aspect has been forgotten: the ... END_OF_DOCUMENT_TOKEN_TO_BE_REPLACED
Author:
Birgit Svensson
Date:
Mail:
Send via mail

END_OF_DOCUMENT_TOKEN_TO_BE_REPLACED
Social media
and networks
Subscribe to our
newsletter