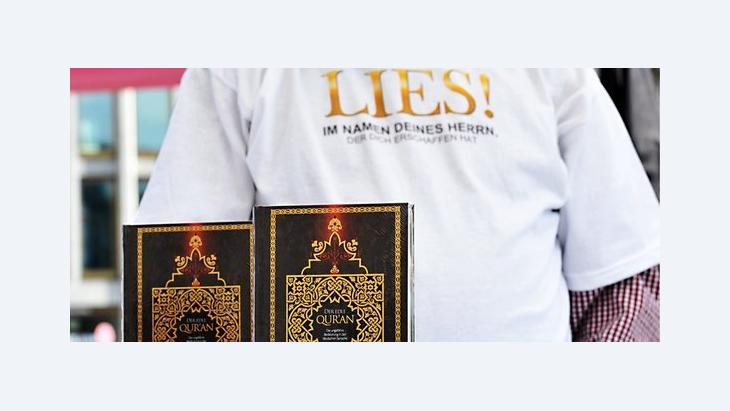 The Response to the Salafist Movement in Germany
Heavy on Populism, Light on Strategic Thinking

﻿Many intelligence officials in Germany are baffled by the political response to the Salafist movement. As far as they are concerned, there is too much populism, not enough strategic thinking, and ineffective communication to boot. Albrecht Metzger reports.

At 6 a.m. on 14 June, a hundred-strong police unit advanced on the Millatu Ibrahim Mosque in Solingen and cleared the house of worship. Just a few hours later, Interior Minister Hans-Peter Friedrich announced a ban on the eponymous association, whose members had expressed open allegiance to al-Qaeda, and had its Internet site removed from the web.

Abu Usama al-Gharib, who until a few months ago was a preacher at the mosque and is now thought to be in Egypt, posted an immediate reaction on his blog: "Until you believe in Allah alone there will clearly only be ENMITY AND HATRED FOREVER between you and us. You can't ban Millatu Ibrahim. Because we carry Millatu Ibrahim in our hearts. Victory or martyrdom."

The Islamic extremists have since fallen silent. But for how long? "The confrontation with Salafism has only just begun," says Guido Steinberg, a specialist in terrorism at the German Institute for International and Security Affairs (SWP) in Berlin. "Millatu Ibrahim has openly issued propaganda for al-Qaeda. Dealing with the Salafists who advocate jihad but don't express this publicly is much more difficult." 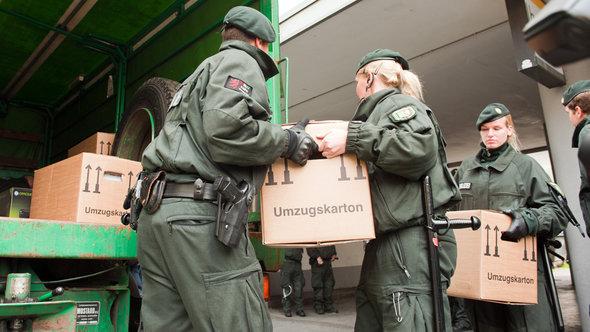 The state homes in: police and the judiciary targeted radical Salafists in a series of large-scale raids across Germany on 14 June, including an operation to clear the Millatu Ibrahim Mosque in Solingen

​​So just how should the Salafists be dealt with? Ever since they began distributing copies of the Koran on German streets a few months ago, consternation surrounding the movement has grown. The intelligence agency warned that Salafism is the ideological "breeding ground of terrorism", and in an interview, the interior minister summed up the position of the security authorities thus: "Not every Salafist is a terrorist, but almost every Islamist terrorist has some kind of link to Salafism."

The situation escalated in early May after the anti-Islamic party PRO NRW, itself under observation by the intelligence agency, set up camps outside mosques to show publicly controversial cartoons of Mohammed. A targeted provocation by extremists on the opposite end of the political spectrum.

The situation remained calm everywhere apart from Bonn and Solingen. Enraged Salafists, among them members of the Millatu Ibrahim Mosque, attacked the police with bars and knives; there were numerous injuries and arrests. Since then, the interior minister has obviously decided to use bans as a way of keeping the Salafists in check. Friedrich described the raids as "extremely successful"; even the Greens applauded the operation. Everyone agreed that religious extremists who advocate violence have no place in Germany.

But if you talk to experts from the police and the intelligence agency who have been concerned with this issue for years, you will encounter less agreement than in political circles and astonishing levels of criticism – self-criticism even. This criticism is not only aimed at the interior minister and the security authorities' analyses, but also at the media. No one has any sympathy for the Salafists, and everyone is looking for ways to curb this anti-democratic movement, which includes elements that advocate violence. 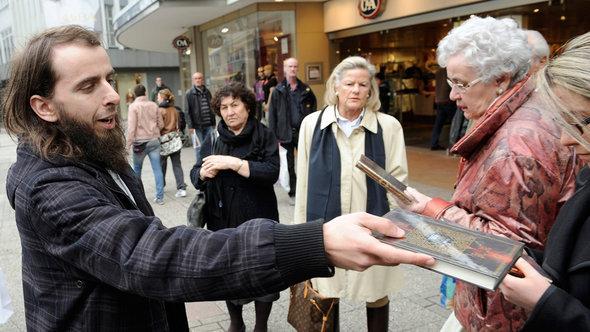 Dangerous combination? Political scientist Sebastian Huhnholz feels that German society has become "Islam-sceptic, if not anti-Islam", while according to Albrecht Metzger, consternation about the Salafist movement in Germany has grown since the group began distributing free copies of the Koran around Germany

​​But many intelligence officials are baffled by the political response to the phenomenon. The main accusation levelled by security experts is that this response is heavy on populism, light on strategic thinking and lacks an effective communication approach.

Salafism is a contentious movement that carries the seeds of discord within it. Various preachers battle it out for the moral high ground, each of them claiming to represent nothing less than the absolute truth. This becomes interesting when dealing with the question of violence because most Salafists reject violence as a means to achieve their aims, whether this be as a result of tactical or ideological deliberations.

In any case, they attack anyone who contradicts them. The best example of this is the Leipzig preacher Hassan Dabbagh, who took Abu Usama al-Gharib from Solingen to task in a video message following the clashes last May. Dabbagh branded al-Gharib an ignoramus, a malicious-tongued man who needs a psychiatrist. "In the name of Allah, I swear in the name of God: he does not represent the truth." Dabbagh went on to say that Germany is a good host country and that in any case, not all unbelievers are enemies of Islam.

The view that Salafism is the "breeding ground of terrorism" whitewashes these differences. Since the distribution of free copies of the Koran, this view has been repeated over and over again like a mantra by politics and the media. "I think it's totally counterproductive," says one Islam expert working with the police. "You have to distinguish between violence and non-violence. That's why you mustn't scandalize the Koran distribution, you mustn't associate it with terrorism. This just plays into the hands of the Salafists; it reinforces their persecution complex. That's the driving force behind the movement."

In view of the escalation, peaceful Salafists could join forces with their brothers who advocate violent struggle, and the divisive element growing within Salafism would lose its impact as a consequence.

Lack of an effective communication strategy 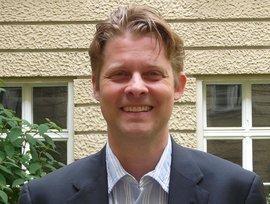 Says Guido Steinberg: " Millatu Ibrahim has openly issued propaganda for al-Qaeda. Dealing with the Salafists who advocate jihad but don't express this publicly is much more difficult."

​​According to this expert, what is lacking is an effective communication strategy. "The interior minister ought to send a two-pronged message to the Salafists," he says. "He ought to say: as interior minister I stand for pluralism and the protection of minorities. I don't like you, we're watching you, but you have the right to operate here like other fundamentalists do. But there's a line that can't be crossed, and that's violence."

But in times like these, what politician wants to allow the Salafists anything? It's not as though they can score any points with voters by doing so. In actual fact, the opposite is the case. "Our society has become Islam-sceptic, if not anti-Islam," says Sebastian Huhnholz, a political scientist at the Geschwister Scholl Institute in Munich. "The public feels unsettled by the Salafists, and the interior minister thinks he has to address these fears."

Other politicians, on the other hand, such as Lower Saxony's interior minister Uwe Schünemann, are evidently exploiting the issue to present themselves as hardliners. They are also not afraid of expressing over-hasty assumptions that then turn out to be inaccurate. For example, Schünemann claimed that the distribution of free copies of the Koran had probably been financed by Saudi Arabia. In view of this, the minister suggested that German arms sales to the kingdom should be halted. "But it wasn't true," says an intelligence official. "The money comes from Germany. It's nothing but populism, and it doesn't help us in our work at all."

But there is broad support in security circles for the ban on Millatu Ibrahim in Solingen, an association that has openly issued al-Qaeda propaganda. The move sends a signal to the pro-jihad elements of the movement: thus far and no further.

But Sebastian Huhnholz favours the Anglo-Saxon model. In England, Islamic extremists are allowed to go much further on a verbal level than in Germany, and there are plenty of preachers there glorifying jihad.

"It would probably be cleverer to grant such extremists platforms that are easier for the security authorities to monitor," says Huhnholz. "Otherwise there's an incentive to abscond into foreign networks. That can't be the solution. Jihad Salafism is more of an ideology than an organization; you can't ban it. Now they will probably make their activities all the more clandestine. And that makes it all the more difficult for the security authorities to monitor them."

Albrecht Metzger is a journalist and scholar of Islam based in Hamburg. His most recent book Der Himmel ist für Gott, der Staat für uns – Islamismus zwischen Gewalt und Demokratie (Heaven is for God, the State for Us – Islamism Treads the Line Between Violence and Democracy) was published by Lamuv-Verlag.

Algeria‘s regime is again cracking down on anti-fracking activists and the unemployed in the country‘s south. Yet EU countries remain keen to scale up their energy cooperation ... END_OF_DOCUMENT_TOKEN_TO_BE_REPLACED

Bachtyar Ali sends the hero of his latest novel – "Mein Onkel den der Wind mitnahm" – literally flying. Jamshid is so thin after his years as a political prisoner that a gust of ... END_OF_DOCUMENT_TOKEN_TO_BE_REPLACED

For a century, the Kurds and other minorities in Turkey have been subject to state repression. With his dissertation "The Kurdish Question in Turkey", political analyst Ismail ... END_OF_DOCUMENT_TOKEN_TO_BE_REPLACED

Anti-Semitic motifs have no place at Germany’s documenta art show or anywhere else in the world, stresses Meron Mendel, director of the Anne Frank Educational Centre in Frankfurt ... END_OF_DOCUMENT_TOKEN_TO_BE_REPLACED

A new exhibition, "Syria – Against Forgetting", at Cologne’s Rautenstrauch-Joest-Museum focuses on Syria's artistic and cultural heritage and pays tribute to the country before ... END_OF_DOCUMENT_TOKEN_TO_BE_REPLACED

Madrid's about-face on the Western Sahara conflict has enraged Algeria. Trade relations have been frozen unilaterally and a cut in gas supplies to Europe could be in the pipeline ... END_OF_DOCUMENT_TOKEN_TO_BE_REPLACED
Author:
Albrecht Metzger
Date:
Mail:
Send via mail

END_OF_DOCUMENT_TOKEN_TO_BE_REPLACED
Social media
and networks
Subscribe to our
newsletter