In total, more than eleven billion dollars in assets passed to the state. These assets are now being managed by the state-run fund TMSF, which has been tasked with selling the companies. The intention is that the proceeds from the sale will flow into the state's coffers. Before this can happen, however, their seizure must be rubber-stamped, which can take some time – even in Turkey's politicised judicial system. While the fund is supposed to sell the companies and property to the highest bidders, there are suspicions that companies and foundations that are closely allied with the ruling AK Party will be given preferential treatment.

Two of the biggest beneficiaries are the Turgev and Tugva foundations, which have considerably extended their network of residential homes and schools since the break-up of the Gulen movement in Turkey. Turgev was founded by Erdogan in 1996, and his son Bilal and daughter Esra are still on its board to this day. Tugva also has close links to the AKP. According to media reports, they have obtained several Gulen residential homes. It is also said that they have purchased land from the state for a very good price.

Other key players in the wrangling for jobs and resources are conservative orders such as the Menzil and the Suleymanci. While the Gulen movement was the most powerful religious fraternity in Turkey, it was certainly not the only one. Indeed, there are a whole range of other cemaats, which, like the Gulen movement, run their own schools, homes and media. Most of them are offshoots of Naqshbandi-Khalidi, a particularly orthodox Sunni Sufi order. 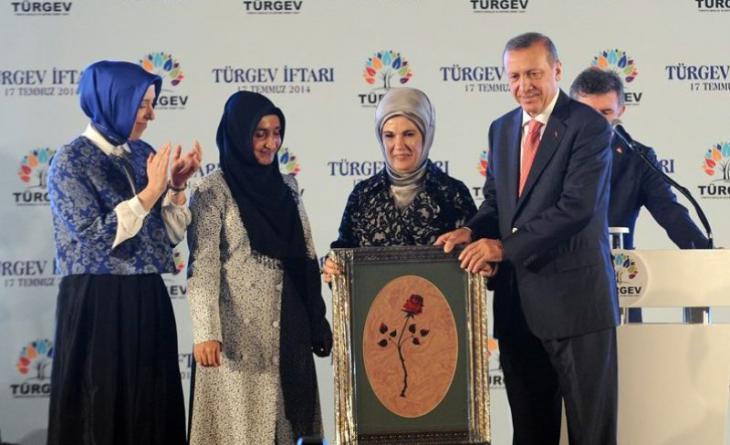 A family affair: founded by Erdogan himself in 1996, the Turgev foundation, which still has two Erdogan family members – Bilal and Esra – on its board is proving to be one of the biggest beneficiaries of the shake-up. According to media reports, the organisation has obtained several Gulen residential homes. Rumours of state land being either donated or sold to Turgev at well below the going rate abound

According to one Istanbul-based sociologist who asked to remain anonymous, the cemaats are the AKP's natural allies. After all, Erdogan and many other AKP politicians started out in the Iskenderpasa lodge, an offshoot of the Naqshbandi order that has considerable political influence. Since breaking with Gulen, Erdogan has relied on Sufi orders such as the Suleymanci or the Ismailaga cemaat to plug the gaps in the education system.

The dream of a ″devout generation″

Erdogan never had enough of his own people to control the state, explains political scientist Svante E. Cornell in Stockholm. This is why, he adds, when he came to power, Erdogan allied himself with Gulen, who had been building up a network of homes, schools and institutes of private tuition since the 1960s. The graduates of these institutes were devout and had a modern education – the ideal people to fill posts in the administration, judiciary and police in Erdogan's Turkey.

Erdogan and Gulen shared the goal of creating a "devout generation". Yet despite their similar outlook on life and objectives, the Gulen movement never merged completely with the AKP. Unlike the AKP, its roots were not in the Naqshbandi, but in the Said Nursi order. Above all, however, Gulen was never willing to subordinate himself to Erdogan, which is why the two men fell out in 2013 and the informal coalition with the Gulen movement collapsed.

Germany’s electorate includes some 7.4 million citizens with international roots, while many more millions of residents from abroad aren’t allowed to vote. Both groups are often ... END_OF_DOCUMENT_TOKEN_TO_BE_REPLACED

International relations are shifting across the Middle East as regional powers adapt to America's retrenchment and China's growing influence. Although the region could become the ... END_OF_DOCUMENT_TOKEN_TO_BE_REPLACED

Germany's foreign policy is explicitly values-based. But what happens, Ralf Bosen asks, when democracy, the rule of law and human rights collide with the logic of trade and ... END_OF_DOCUMENT_TOKEN_TO_BE_REPLACED

A new global database shows a significant gap in reported COVID-related deaths, suggesting the actual worldwide death toll is short by at least 1 million. That's due in part to ... END_OF_DOCUMENT_TOKEN_TO_BE_REPLACED

Ankara's foreign policy apparatus is currently running at top speed. While politicians in the West busy themselves with evacuating Kabul and analysing the chaos, which not even ... END_OF_DOCUMENT_TOKEN_TO_BE_REPLACED
Author:
Ulrich von Schwerin
Date:
Mail:
Send via mail

END_OF_DOCUMENT_TOKEN_TO_BE_REPLACED
Social media
and networks
Subscribe to our
newsletter