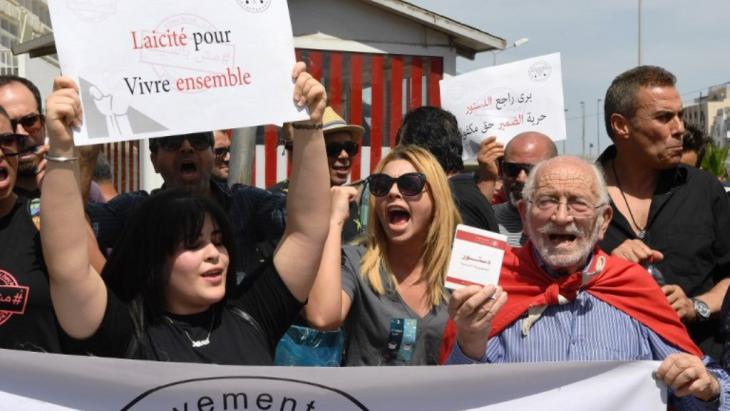 Tunisiaʹs Constitution of 2014 may guarantee freedom of conscience and belief, but the country has not resolved the debate surrounding the non-observance of Ramadan in public. Ismail Dbara reports from Tunis

The fierce debate currently raging in Tunisia about those who openly do not fast during Ramadan reveals that the countryʹs constitution, which may have been drafted in accordance with the "political consensus" does not really reflect any "social consensus". The text guarantees freedom of conscience, but the nature of the guarantee has been left open and is full of contradictions.

While protecting many individual rights, the constitution – which was passed in 2014 – includes other aspects which contradict them in practice. For example, it guarantees "freedom of conscience", whilst also offering to preserve "all things holy" and to protect them from harm.

On Sunday 27 May 2018, Tunisians organised a demonstration in the capital that responded to calls on social networks asking people who werenʹt fasting to defend their right to eat and drink in public during Ramadan. This was in direct response to the archaic edict that the Interior Ministry has this year dusted off and re-implemented, which requires cafes and restaurants to close and penalises those who advocate ignoring the fast in public.

The debate over eating and drinking in public during Ramadan has seen little change since the December 17 uprising, which overthrew Ben Aliʹs dictatorship. It reveals how far Tunisians still have to go to achieve an appropriate balance between individual liberties – as adopted in the new constitution – and the requirements of the public domain, in a country in which conservative forces still exert extensive influence, both politically and socially.

Tunisians are divided into two camps. There are those who call for the phenomenon to be confronted, who claim that eating in public during Ramadan is a provocation. They expect the law against non-fasters to be enforced, arguing that Ramadan "is a time for worship and for observing the ritual of the fast". Then there is the second camp, made up of those who expect the state to protect individual freedoms and to guarantee their rights to practice their beliefs. Both sides cite the same chapters of the constitution to justify their positions!

This split appears to be an honest reflection of the loose formulations that characterise Tunisian law. The debate has been intensified by the Constitutional Courtʹs lack of focus, with jurists ever hopeful that it will dismantle the legacy of laws, which they call "mediaeval" and contrary to the spirit of the new constitution.

Article 6 of the 2014 Constitution declares that "The State is a custodian of religion, a guarantor of freedom of belief and conscience and of the exercise of religious rites and a guarantor of the neutrality of mosques and places of worship against partisan recruitment. The State is committed to promoting the values of moderation and tolerance and to preserving all things holy and protecting them, as it is committed to preventing calls for takfīr and protecting against incitement to hatred, violence and accusations of apostasy." 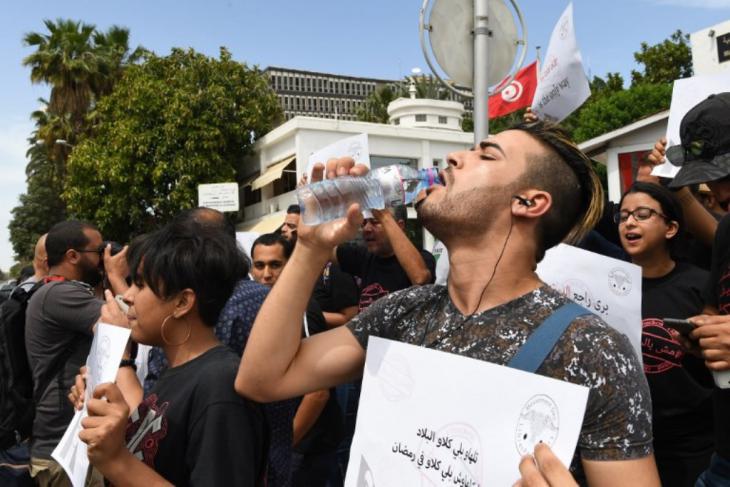 "Freedom of belief" versus "the preservation of all things holy": Tunisia does not have any explicit provisions that criminalise eating and drinking in public in Ramadan. That said, the authorities go to considerable lengths to punish those who do not fast by charging them with "violating public morality". This happened to a number of young people last year and resulted in broad condemnation by legal practitioners

Article 49 stipulates that "the law shall determine the regulations relating to the rights and freedoms guaranteed by the Constitution and shall exercise them in a way that does not compromise them. Such controls shall be established only to meet the needs of a democratic civil state and to protect the rights of others, as well as to safeguard public order, national defence, public health and public morals, whilst respecting the proportionality of such controls and their obligations. The judiciary shall protect the rights and freedoms from any violation".

A Tunisian farmer attaches a machine to a cow's udder and sets the pump whirring, but he only expects to fetch less than half the normal amount of milk amid soaring fodder prices END_OF_DOCUMENT_TOKEN_TO_BE_REPLACED

The book "The Invention of the Maghreb: between Africa and the Middle East" prompts us to review basic terminology. This includes terms that we use almost every day as if they are ... END_OF_DOCUMENT_TOKEN_TO_BE_REPLACED

The term "Tuareg" refers to tribes and nomads who speak dialects of Tuareg and live in Targa, an area in south-west Libya recently renamed Wadi Al-Hayat but previously known as ... END_OF_DOCUMENT_TOKEN_TO_BE_REPLACED

Where are the measures to deal with the looming challenges facing the Arab world? In this commentary, Marwan Muasher warns that the region is in grave danger of falling behind ... END_OF_DOCUMENT_TOKEN_TO_BE_REPLACED

At the end of every year, the team at Qantara.de gives you a run-down of the ten most-read articles on the site over the past 12 months. Here is a quick overview of the stories ... END_OF_DOCUMENT_TOKEN_TO_BE_REPLACED

According to a recent survey, half of all Iranians say that they have left Islam as a religion, while two-thirds believe Islamic law should be excluded from their legal system. In ... END_OF_DOCUMENT_TOKEN_TO_BE_REPLACED
Author:
Ismail Dbara
Date:
Mail:
Send via mail

END_OF_DOCUMENT_TOKEN_TO_BE_REPLACED
Social media
and networks
Subscribe to our
newsletter