A Laboratory City in the Desert

Is Dubai's groundbreaking urban construction project the way of the future - or will it stumble over its own contradictions? Rüdiger Heimlich travelled through the emirate, gathering voices from Western and Arab intellectuals 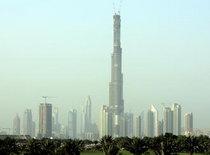 An Arab "Tower of Babel"? – The "Burj Dubai" embodies the emirate's towering ambitions

​​ Superlative skyscrapers: since March 2008 the United Arab Emirates' "Burj Dubai" has been the tallest building in the world. Rumour has it that the regent will provide anyone who manages to put a spire on top of it with an apartment in the Burj Dubai, lifetime residence and free education for their children.

There don't seem to be many daring candidates lining up to fulfil the monarch's wish as yet. And perhaps the worldwide search for a courageous crane driver is only a PR fairytale for the 1001 Nights myth of the desert metropolis of Dubai.

If an undiscovered hero does take the world's fastest lift, catapulting him to the highest point at which a crane has ever mounted a steel tip on a building, and then looks out from the 800-metre residential tower across the desert and the sea, down onto "The Palm" and "The World", the artificial islands for the mega-wealthy, the most expensive hotels and largest shopping malls in the world, the entertainment centres, university campuses and museum landscapes, what could he say into the cameras but: "What a city!"

Yet for Western urban planners, anthropologists and critics, it is far from decided whether this wonderland, seemingly conjured up overnight by a djinn in the burning desert, is a city at all. "It is certainly one of the most exciting experiments of our times," says Eckhard Ribbeck, but he adds that nobody knows how the experiment will end.

Ribbeck, a professor at the University of Stuttgart's Institute of Urban Planning and Design, feels rather torn by this "architectural madhouse". The German academic describes Dubai as "a laboratory", a new type of city where the project of 1950s and 1960s utopian modernism is being realised: the biggest names in architecture and engineering are conquering the desert, sea and airspace. 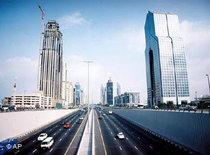 ​​ It is still unclear, according to Ribbeck, whether this metropolis is capable of survival or will stumble over its own contradictions like a modern-day Tower of Babel: its use of resources with no consideration for ecological criteria, its extreme social segregation and the lack of identity of its inhabitants. At this stage, both options are still possible, he says – a future as a glittering Las Vegas or as a desolate investment ghost town.

In air-conditioned shopping malls, veiled ladies stroll from Gucci to Boss, from Armani to Rolex. Next door, the posters for the Dubai Film Festival are being taken down. Hollywood and Bollywood vied for attention, Nicolas Cage and Goldie Hawn were in town. Oliver Stone's film about George W. Bush was shown. Now the Dubai Literature Festival is just being announced, featuring "the world's finest writers".

Emotions were conflicting too among the invited journalists and writers from Egypt, Syria, Lebanon, Palestine, Saudi Arabia and Germany. On the invitation of the foreign relations institute Institut für Auslandsbeziehungen (ifa), financed by the German Foreign Office, prominent figures attended a two-day symposium discussing the effects of Western cultural imports on the inhabitants of the Gulf and the Arab world as a whole.

Museums, opera houses, universities, satellite TV, Western commodities, Western lifestyle, the uninterrupted merry-go-round of imported cultural events – how do the people of the Gulf deal with all this? Will they lend the Gulf cities the same significance that Cairo and Beirut had in the 1950s and 60s? Or are they rejected as symbols of postcolonial Western cultural hegemony?

"Minority in our own country"

A tour through the historical centre of the city on Dubai Creek, through luxury estates and rows of tower blocks leaves the intellectuals confused. 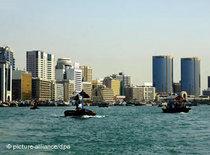 ​​ The "experiment" Dubai questions not only Arab but also Western concepts of aesthetics and identity politics. Is it a city at all, the question arises, where local people are a minority barely visible in public; where not the local language but a business language, not the state religion but a multi-faith mixture dominate; a city financed not by taxes but by profits, populated not by citizens but by temporary employees with vague residence rights; where a million-strong army of service workers maintains an idle elite?

"All the way through the tour I was thinking of Aldous Huxley's Brave New World," says the Palestinian writer Hassan Khaled.

Yes, admits Salem Humaid from Dubai's ministry of culture, investment was initially one-sided, focusing on infrastructure. Now there is a mental problem. "The majority of Emiratis aren't happy about most of the ongoing projects," he says. "We're already suffering from the large number of outsiders, and we feel like a minority in our own country."

Between Bedouin and pop culture

And yet the Emirates are the only successful model in the Arab world, says Humaid. Hareb Dhaheri from the authors' association agrees, but adds that one cannot simply leap from pre-modern conditions to post-modernism without ever having entered modernism. "We can't discriminate against women and expect the West to respect us." 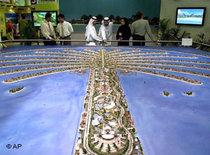 Planning an artificial island world in Dubai: Fear of a "Disney" city and loss of cultural identity?

​​ Dubai's conservative Bedouin society fears for its traditions and social cohesion – but still consumes Nintendo games and Hollywood movies. Western lifestyle, commercialism and art are so concentrated that even occidentals get anxious about the Orient.

For Abdul Majjed Suwailem, a political scientist at the Ramallah Al-Quds University, there is only one either/or: either Dubai is an Arab city or it is a business model. "If Dubai is only a business model, it's very simple: then Western museums, theatres, universities and international architects are imported as brands, to magnetically attract mass tourism as prestige objects and global icons."

No, says Suwaillem, neither Dubai nor Dohar have an Arab identity. If they wanted to be Arab cities, they would first have to establish a balance of Arab and Western culture.

Ali bin Mohammed Zabanout from the information ministry of the emirate of Oman explains that Arab identity and culture are rooted in Islam, Arab nationalism and reverence for the past. But the scope, he says, is getting larger. Arab film, newspaper and book production is growing and illiteracy is being tackled.

A city of astounding sights – but would you live there?

Sayed Mahmud from the Egyptian newspaper Al Ahram is convinced that Western cultural imports have a grave influence on the people of the Arab world. It will only be lasting, he adds, if art has greater freedom in the Orient.

Hareb Al Dhaheri, head of the Emirates' author association, wishes for a balance between "what we take over and what we input ourselves. Imports must not be carried out at the cost of our own cultural identity."

For the German ethnologist Joana Breidenbach, Dubai is already a gain in diversity. The German critical view of the "Disney" city is too negative, she says – Dubai demonstrates that the division between high culture, entertainment and tradition is outdated.

Whereas Western critics have their problems with the cities in the age of migration and globalisation, reactions from tourists in the Gulf are actually euphoric: this conglomerate of superlatives in the middle of a hostile natural environment is so abstruse it has to be seen to be believed. But will they stay on? Not likely.

Education in the Gulf
Knowledge instead of Oil
The Arab Gulf states have discovered education as the raw material of the future. In order to quickly move ahead, they are importing universities from the west. There is still room for many more students – even those from abroad. A report by Arnfrid Schenk

Cultural Politics in the Emirate of Abu Dhabi
Frighteningly Giant Leaps
The new concept of the Abu Dhabi Book Fair is only a part of the new cultural policy in the emirate of Abu Dhabi. Mona Naggar examines the high-flying cultural ambitions of the UAE's richest emirate

END_OF_DOCUMENT_TOKEN_TO_BE_REPLACED
Social media
and networks
Subscribe to our
newsletter