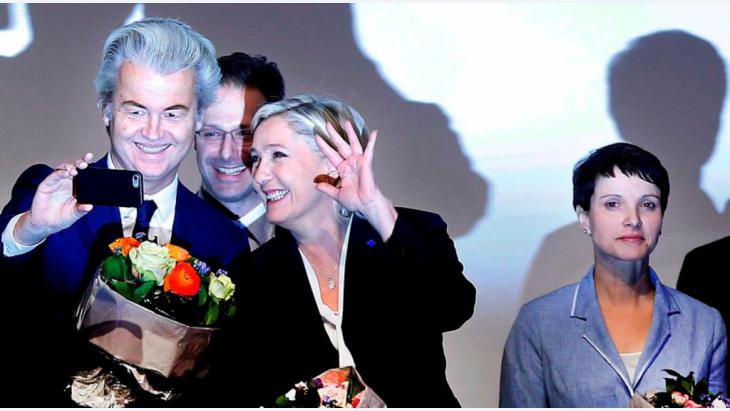 The rise of right-wing populism in Europe
A continent divided

The rise of right-wing populism is throwing Europe off-balance. The impacts on policies concerning migration, inclusion and asylum are already evident. In many European countries, right-wing propaganda is calling into question achievements such as the freedom of religion, free movement for EU citizens and the right of asylum. By Daniel Bax

The election of Donald Trump in the US has emboldened right-wing populists in Europe. Marine Le Pen, head of France's Front National, congratulated Trump after his surprise victory. The Dutch right-wing populist Geert Wilders tweeted: "The Americans are taking their country back." And Nigel Farage, of all people, was the first European politician to pay a personal visit to the American billionaire in Trump Tower in New York following Trump's victory. Farage is prominent for leading the populist United Kingdom Independence Party (UKIP).

Farage supported Trump's campaign, and Trump reciprocated by celebrating Farage as "the man behind the Brexit". UKIP was one of the driving forces of Euroscepticism in Britain, and Trump saw the vote to leave the EU as support for his own course of action. The truth, however, is that the referendum threw the EU and the UK into an existential crisis. No one knows how the split will be carried off after five decades of shared policy, and UKIP bears no responsibility.

Right-wing parties are currently experiencing a resurgence in Europe, the like of which has not been seen since the Second World War. Their rise is a consequence of the uncertainty felt by broad sections of European society, particularly by older people, who feel threatened by globalisation, migration, European integration and the trend towards increasingly diverse, individualised lifestyles. They feel like pawns in a great international game. Even though they live in economically strong democracies, they have the impression that they have lost all control of their lives and their countries' politics.

The response of right-wing nationalists to these fears is simple. They strike a neo-nationalist tone. They criticise not only multilateral agreements but also the EU and its attempts to arrive at a humanitarian refugee policy. They are unified, moreover, in championing more traditional families and believe in a dominant national culture, often marked by Christian values. They call for a tough stance against immigrants, refugees and Muslims or, in Eastern Europe, against the Roma. They demand strict asylum and immigration laws as well as decisive action against the threat of terrorism. They believe the mere presence of Muslims is increasing the risk of attacks. One of their favourite ways to stir up resentment is to point to the supposed "abuse" of social-protection services by immigrants. 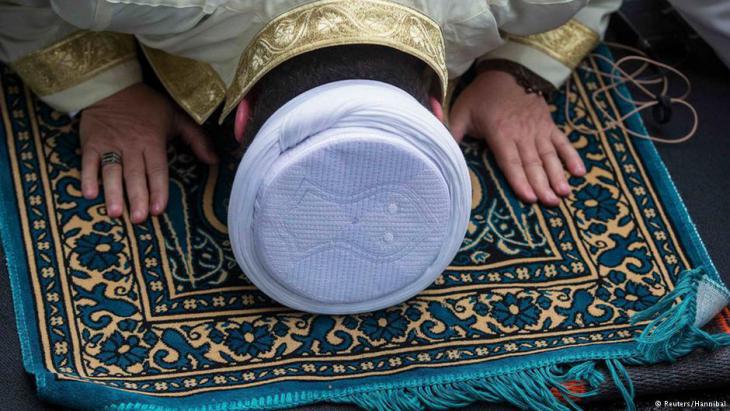 Muslims as scapegoats: Europe's right-wing populists are in favour of strict asylum and immigration laws and decisive action against terrorist threats. In general, they view the very presence of Muslims as a threat. One popular way of fanning the flames of resentment towards immigrants is to highlight their alleged abuse of social security

- they want to reduce – or even reverse – all immigration, but especially that of Muslims.

- They want minorities to become as invisible as possible, for instance, by making headscarves, mosques and anything all too "foreign" disappear from public life.

Both goals stem from the desire to keep things as simple and culturally homogeneous as they supposedly were in a nostalgically imagined past. This illusion is presented as the answer to current challenges.

There are, of course, differences between countries. Whereas right-wing parties in Western Europe are comparatively moderate and speak in general terms about "unbridgeable cultural divides", right-wing populists in Eastern Europe are often unabashedly nationalist and racist. Dutch populists argue that women and homosexuals have to be protected from Muslims' conservative and patriarchal attitudes, and Wilders even voted for same-sex marriage in parliament. However, most European right-wing parties oppose equal rights for homosexuals.

Whereas Le Pen insists that she is defending France's laicism, or separation between church and state, from the supposed threat of "Islamisation", the populist governments of Hungary and Poland claim to be protecting from Islam a Western culture that is somehow based on Christianity. The right-wing, clerically-oriented Polish government sees what it calls a "gender conspiracy" at work. It tried to further restrict the country's already extremely conservative abortion law, but had to withdraw that initiative after vehement protests by Polish women.

Opinions are split on economic matters as well. France's Front National is in favour of economic protectionism and a strong welfare state. Scandinavia's populists similarly promise to protect the traditional welfare state – in particular from immigrants, whom they accuse of taking advantage of social-protection services. In contrast, the Swiss People's Party and Germany's AfD tend to take a more market-radical approach.

What the populists promise

Many parties would like to re-establish border controls or even their own national currencies, but others do not go that far. In any event, Wilders and Le Pen have both raised the prospect of holding referendums on the EU membership of their respective countries.

Such differences do not stop right-wing populists from co-operating, however. In the European Parliament, Wilders' "Party for Freedom", Austria's FPÖ, Italy's Lega Nord and the Front National form a joint parliamentary group. And when Le Pen was officially nominated as a candidate for president, Wilders and Austria's FPÖ leader Heinz-Christian Strache travelled to Lyon to attend the FN convention. Strache took a spin on the dance floor with the woman he called "the future president" of France. 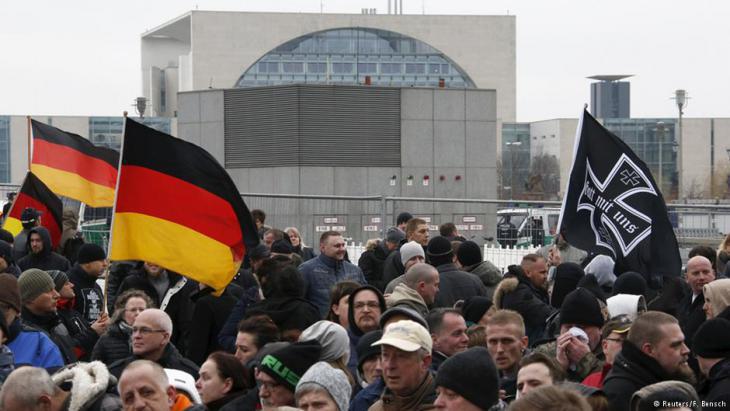 "The rise of right-wing populists has dire consequences for the traditional balance of power in the post-war era," says Daniel Bax. "The emergence of a third strong power threatens to upset this balance. It is shifting the entire political spectrum and may yet tear apart the EU"

In Italy, the established parties are hemmed in on two sides: on one side by the right-wing populist party Lega Nord led by Matteo Salvini, which has its strongholds in wealthy northern Italy, and on the other by the "Five Star Movement" of Beppe Grillo, a comedian by profession. The movement has won the mayoral elections in Rome and Turin. Together with Forza Italia, the party of Silvio Berlusconi, who was long considered the prototype of a European populist, they ensured that the constitutional reform promoted by Matteo Renzi failed in the referendum of December 2016.

In other Southern European EU crisis countries, the difficult economic situation has contributed to the recent success of new left-wing parties. Greece is ruled by the left-wing party Syriza, which however is now forced to implement the strict austerity demanded by the EU. In Spain, the left-wing coalition "Podemos" is making life difficult for the established parties. These new organisations are sometimes called left-wing populist parties. However, their political programmes are pragmatic and feasible compared to those of the right-wing populists. They essentially want to enact Keynesian economic and redistribution policies, which were considered normal across all of Western Europe in the 1960s and 70s.

The rise of right-wing populists has dire consequences for the traditional balance of power in the post-war era. The politics of most Western European countries have been shaped by an interplay between centre-left and centre-right parties and their coalitions. The emergence of a third strong power threatens to upset this balance. It is shifting the entire political spectrum and may yet tear apart the EU.

In many countries, right-wing populists have long stood on an equal footing with, or have even surpassed, the big parties that have traditionally driven policymaking. Many political scientists therefore consider them a third kind of major party, not least, because the populists get support from all sections of the electorate. While a large share of their voters are men with low education levels, many of their supporters are entrepreneurs or "high achievers".

In Sweden, the established parties are still managing to keep the populists at bay; a coalition of Social Democrats and Greens is in power. In Belgium recently, a "cordon sanitaire" of civil- society forces made the "Vlaams Belang", a regional populist party, lose popularity. In the European context, Germany, with its still young and marginal populist movement, seems like an island of stability and liberal principles.

In Doha, Arabs from Morocco, Tunisia, Egypt and Algeria are gathering to celebrate the first ever FIFA World Cup to be held on Arab soil. The criticism from Europe? Over the top, ... END_OF_DOCUMENT_TOKEN_TO_BE_REPLACED

Canan Topcu came from Turkey to Germany as a child. In her essay, she describes how bothered she was by the racism she encountered in her country of origin when she travelled ... END_OF_DOCUMENT_TOKEN_TO_BE_REPLACED

All organisers use major sporting events like this year’s FIFA World Cup in Qatar primarily to advertise their country and promote a slick public image. This is not something we ... END_OF_DOCUMENT_TOKEN_TO_BE_REPLACED

Lamya Kaddor, MP for Germany’s Green Party, visited Qatar with a group of parliamentarians. In interview with Claudia Mende, she advocates a differentiated picture and urges that ... END_OF_DOCUMENT_TOKEN_TO_BE_REPLACED

COP27 in Sharm el-Sheikh is turning into a PR disaster for Egypt’s military regime. Instead of praise for the host, the news is full of solidarity for imprisoned activist Alaa ... END_OF_DOCUMENT_TOKEN_TO_BE_REPLACED
Author:
Daniel Bax
Date:
Mail:
Send via mail

END_OF_DOCUMENT_TOKEN_TO_BE_REPLACED
Social media
and networks
Subscribe to our
newsletter