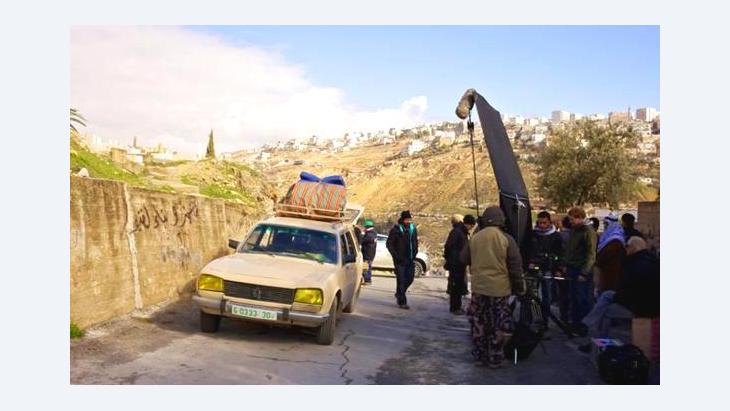 ﻿"Father Is Doing Fine" is a turbulent comedy about the complex relationship between two brothers and the first German movie to be filmed in Jordan. The film's international cast and crew's working language is however English, and this is spoken in many different accents on set. Amira El Ahl watched them at work

Rafik and Jamal can't stand each other. But they are brothers, and when Jamal gets married, Rafik travels back home from Hamburg to celebrate the wedding along with the rest of the family in Jerusalem. Originally planned as a flying visit, the trip suddenly becomes a complicated journey through Israel and into Rafik's past.

This is because their father, the head of the family, dies during the celebrations. Rafik and Jamal are assigned the duty of smuggling their father's body from Jerusalem to Ramallah, with the Israeli police, terrorists and the Russian mafia hot on their heels.

A film about identity

The film script is the work of Gabriel Bodenstein, who has been developing the project together with producer Frank Geiger and the production company Brave New Work over the past three years. 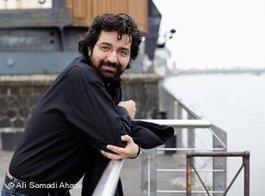 From Jerusalem to Ramallah: German-Iranian director Ali Samadi Ahadi's new film "Father is Doing Fine" is not only a road movie, it's also a film about identity

​​"It's a film about identity, it deals with the questions: ‘Who am I? Where do I come from and where do I live?'" says Frank Geiger. Then there is the road movie element. "We spent a great deal of time in a white van," says Navid Akhavan, describing work on the set – and in that van, anything could happen. The German-Iranian actor plays the good brother Jamal in the German production.

The team from Germany spent two months filming in Jordan, with the final days at the end of February in the Jordanian capital Amman. Producer Frank Geiger says all that's missing now are location shoots of Jerusalem and Hamburg.

In Jordan, most of the filming was done in Salt, Amman and in the desert. "Salt is a very good substitute for Jerusalem," explains producer Frank Geiger. He says that it was difficult to film in original Israeli locations. "The Israelis had issues with our project and in any case, it's considerably cheaper to film in Jordan."

This is the first German film ever to be shot in Jordan. The entire production infrastructure and funding comes from Germany, as well as the crew, the director, editor and most of the actors.

The main roles are played by the German-Iranian actor Navid Akhavan (Jamal), known among other things for his lead role in the German comedy "Salami Aleikum", and Karim Saleh (Rafik). This Lebanese actor has appeared in several Hollywood productions, including Steven Spielberg's "Munich". 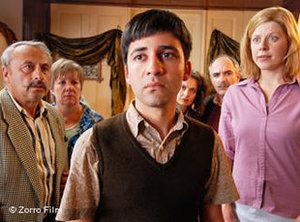 From Jerusalem to Ramallah: Ali Samadi Ahadi's new film "Father is Doing Fine" is not only a road movie, it's also a film about identity

​​The director is German-Iranian Ali Samadi Ahadi, whose documentary film "The Green Wave" scooped the Adolf Grimme Prize in 2011. He's been nominated for the same prize this year, for his debut feature film "Salami Aleikum".

Both lead actors had already worked together on another production before filming began on "Father is Doing Fine". They appeared in "The Hamburg Cell", a British production from 2004. Playing two brothers came very naturally to them. "We get on really well and to a certain extent, we felt like brothers even before we had to play the roles," says Navid Akhavan.

Jordanian film industry about to take off?

Unlike Morocco or Egypt, Jordan does not have a long-established film industry. This makes it all the more surprising that over the past few years, Jordan has become an increasingly popular place to make movies. When co-producer Donall McCusker came to Jordan for the first time six years ago, there was virtually no film production infrastructure in Amman. 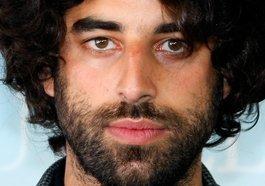 ​​He's produced four films in Jordan since then, among others as co-producer of the war-time drama "The Hurt Locker", which won six Oscars in 2010. "The Jordanian film industry is growing and will soon experience a boom," says Donall McCusker. One reason for this, he adds, is that in comparison to other nations in the region, whether that be Egypt or Lebanon, it is a safe location.

In addition, the Royal Film Commission in Amman gives considerable support to foreign productions, which makes working there much easier than in other countries in the Middle East. "Even the Jordanian army supports film productions, and that's a great help to us," says McCusker.

Work on "Father is Doing Fine" is due to be completed this coming June. Producers then hope it will be premiered at one of the season's major film festivals.

And the movie's international prospects look rosy. After all, "Father is Doing Fine" is being filmed entirely in English, and will be dubbed into German at a later stage – a great advantage for worldwide distribution.

Fifty-five years after Israel began occupying Palestinian lands, it is more difficult than ever to imagine a way out. The seeds of the two-state solution that were planted by ... END_OF_DOCUMENT_TOKEN_TO_BE_REPLACED

Yazan Khalili is spokesman for The Question of Funding, a collective of artists taking part in the leading German contemporary art festival Documenta 15. Here, he responds to ... END_OF_DOCUMENT_TOKEN_TO_BE_REPLACED

When times are tough, the exchange of ideas and perspectives becomes especially important. It takes dialogue. And at Deutsche Welle, we need distributors and cooperative partners ... END_OF_DOCUMENT_TOKEN_TO_BE_REPLACED

Every week, Jewish, Christian and Muslim youths meet to sing together. And they do so in the middle of a city where Israelis and Palestinians are often at loggerheads. Anja Koch ... END_OF_DOCUMENT_TOKEN_TO_BE_REPLACED

What do we mean when we talk about Palestinian literature: an exploration using the example of Adania Shibli’s slender novel "Minor Detail". By Miryam Schellbach END_OF_DOCUMENT_TOKEN_TO_BE_REPLACED

Dalia Hatuqa is an experienced journalist who has reported on the Israeli-Palestinian conflict from Ramallah, Washington DC and Amman. A writer for Time Magazine, Foreign Affairs ... END_OF_DOCUMENT_TOKEN_TO_BE_REPLACED
Author:
Amira El Ahl
Date:
Mail:
Send via mail

END_OF_DOCUMENT_TOKEN_TO_BE_REPLACED
Social media
and networks
Subscribe to our
newsletter