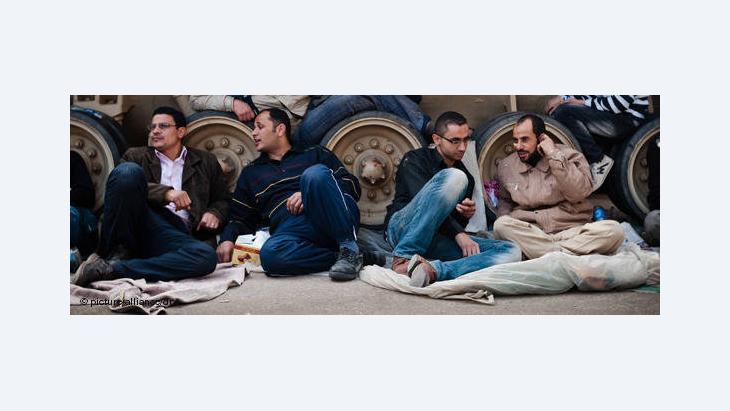 ﻿What happens when a country's biggest stars are despised because they supported a former dictator? Very few of Egypt's illustrious old TV guard are still in front of the camera. Yet two film-makers are already working on an appraisal of the protests in Tahrir Square. Moritz Baumstieger reports

It certainly looks like a carbon copy of Cairo, but something is not quite right. Falafel stand at the corner, check! Juice bar, check! Vegetable seller, check! Business men carrying briefcases and women wearing veils walking past Internet cafés, past old men smoking water pipes outside a tea house, check!

It is the underlying drone of the 17-million-person machine that is Cairo that is missing. An eerie silence hangs over the scene until "Cut!" booms out over a loudspeaker. 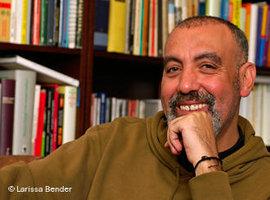 "In the 30 years of Mubarak's rule, we all became little dictators": Film director Khalid el-Hagar is showing his younger colleagues what the future of the Egyptian film industry might look like

​​Although the scene is audibly far removed from Egyptian reality, it is part of a new realism that is currently taking hold of the world of Arab TV series, which up until now was garishly colourful. The voice coming out of the loudspeaker belongs to Khaled el-Hagar, one of the few people in Cairo giving film directions at the moment.

When throngs of people conquered Tahrir Square on 25 January, all filming in Egypt ground two a halt for two reasons. Firstly, the government had imposed a curfew that brought public life to a virtual standstill. Secondly, the studio bosses were suddenly worried that their current stars might not remain stars for long. The actress Samah Anwar, for example, had called for fighter jets and nuclear weapons to be deployed against the demonstrators "because they are destroying Egypt".

Moreover, megastar Tamer Hosny, who is known as the Justin Timberlake of Arabia and plays whatever television roles comes his way, wailed an apology into a camera after he had been driven out of Tahrir Square. The people had not forgotten that he had called Mubarak his "father" only a short time previously and had called on the demonstrators to go home.

Now, whenever Hosny, Anwar and any of their colleagues who were loyal to the regime appear on television, Egyptian viewers switch off. Advertisers and sponsors are withdrawing their financial support and so "it's a wrap" is a phrase not seldom heard these days. This time of year is generally the busiest for Cairo studios, whose films and series dominate the entire Arab market. The month of Ramadan – the television high point of the year when every station wants to win over viewers with their own expensive productions – is due to begin on 1 August.

Leaving reality out of the frame

This year, however, when families sit down in front of the television after breaking their fast, they will have to content themselves with re-runs: filming for most productions was cancelled; only six continued; five of these are going to look as if the revolution never took place. The scripts were ready; the first episodes had been filmed; now the crews are just carrying on filming, leaving reality out of the frame. 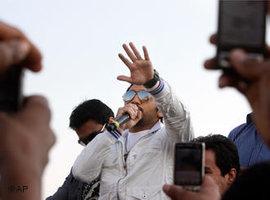 Banished by the revolutionaries in Tahrir Square: music star and actor Tamer Hosny, who is also known as the Justin Timberlake of Arabia, told protesters to "go home"

​​Not so Khaled el-Hagar. At 48, the internationally renowned independent film-maker no longer belongs to the young generation that carried the revolution. Nevertheless, it is el-Hagar who is showing the younger ones what the future of the Egyptian film industry might look like.

Wearing a loose shirt and an army cap, he sits in his director's box in the renowned Masr Studio near the pyramids. He is currently spending 12 hours a day on the set of "Dawaran Shubra", his 14-part serial, which is being coproduced by the BBC. The schedule is tight; time lost due to the revolution has to be made up.

The fact that el-Hagar is in a position to continue filming has to do with the script, which he put his faith in. "Dawaran Shubra" tells the story of an Egyptian Christian who is burdened with debt and falls in love with the wrong girl, an everyday occurrence in a country where young people have no prospects and sexuality is a taboo-ridden minefield.

It is exactly this everyday aspect that is the strength of "Dawaran Shubra": it highlights the very problems that ultimately led to the revolution: corruption, religious conflicts, police violence. Egypt's most important film critic, Sherif Awad, says that viewers are "fed up with all the slapstick comedies they have been pacified with over the decades." The Egyptians who reconquered the political sphere in Tahrir Square, he says, now want more serious material.

Yet even before the revolution, "Dawaran Shubra" was relying on new realism. Moreover, el-Hagar has always been a director who highlighted the taboos in his native country.

He studied directing in Birmingham. In 1994 he filmed A Gulf between us, a love story about an Egyptian Muslim and a Jewish Israeli woman during the first Gulf War. By this time at the latest, he had made a lot of enemies both at the censorship authority and in the Muslim Brotherhood. When he returned to Egypt in 2003, he decided only to film stories written by others "so that the hate is distributed among two heads".

The second "head" in this production is Amr el-Daly. El-Daly looks very thin indeed alongside the bulky, tattooed director. Although aged 29, he could be mistaken for one of the tea boys who stand in for the catering trailers on Arab sets.

El-Daly grew up in Shubra, a district in northern Cairo, the place where the serial is set and that gave the production its name. Shubra is a kind of miniature version of the entire country, explains el-Daly. It is home to Muslims and Christians, rich people and beggars. It's the perfect cross section.

Even before the revolution plunged the country into the modern era, el-Daly wanted to do things differently. He wanted to show the real Egypt, "a backdrop that the viewers will recognise". He succeeded so well in this task that the first script was confiscated by the censors.

This was followed by a death threat from Islamists. But el-Daly had another trick up his sleeve: he made the overall plot more agreeable, but gave individual dialogues more bite – most of the dialogues were not read in detail by the censors. 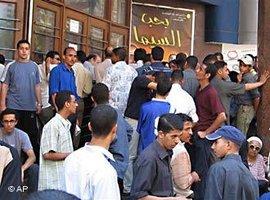 Cinema as the opium for the masses: According to film critics like the Cairo-based Sherif Awad, viewers have had enough of the fluffy, insipid entertainment and slapstick comedy with which they were pacified for decades

​​And so filming began. A month later – on the day that el-Daly joined others in Tahrir Square and camped out there until the dictator was toppled – it looked as if it was all over. His director, el-Hagar, was not at the demonstrations as often as el-Daly was, so he had time to worry about the project: one leading actor was arrested, tough men came and attacked the set, the musician Hani Adly, who played a minor role, wrote "Sout el-Horreya" (Voice of Freedom), the theme song of the revolution, and was occupied elsewhere.

El-Hagar began thinking about how he could make the script more realistic. The revolution could not simply be ignored; nor could it be re-enacted: "The images from Tahrir Square were so powerful that as an artist, you can't possibly match them."

The last battle for Tahrir Square

When el-Daly also returned to his normal life, they came up with a solution: although the focus would not be on political events, they would be alluded to in the dialogues or casually woven into the story. For example, in the background of a farewell scene, police units in riot gear move into position before being sent from the Ministry of the Interior to the last battle for Tahrir Square.

The story of el-Hagar and el-Daly also shows how unused to its new freedom the culture sector still is. The set of "Dawaran Shubra" often resembles a debating society: over and over again, el-Hagar has to intervene when a political fight between two actors threatens to turn violent.

"In the 30 years of Mubarak's rule, we all became little dictators," he says. "We will have to learn how to accept other opinions." It is almost like a therapy session when everyone involved gathers around a portrait of Mubarak and discusses whether they want to have it hanging in the scene after the revolution.

The overthrow of the system has increased the amount of attention being paid to the serial. "The Egyptian film scene will be dealing with the revolution for years to come," explains critic Sherif Awad. "Many projects are at the planning stage, but Khaled will be the first with 'Dawaran Shubra'."

When filming is completed, el-Hagar wants to move on to the next step: el-Daly is writing a cinema film plot, a film in episodes that will trace the path of individual demonstrators to Tahrir Square.

This film will also subscribe to the new realism – in more ways than one, as far as el-Hagar is concerned: one of the protagonists suffers from panic attacks in crowds, which means that the protest becomes for him a battle against himself. El-Hagar knows all about it: he suffers from claustrophobia, which is why he had so much time during the days of the revolution to reflect on how the serial would continue.

In Doha, Arabs from Morocco, Tunisia, Egypt and Algeria are gathering to celebrate the first ever FIFA World Cup to be held on Arab soil. The criticism from Europe? Over the top, ... END_OF_DOCUMENT_TOKEN_TO_BE_REPLACED

November 2022 sees the Arab world firmly in the spotlight with the COP27 in Egypt and the FIFA World Cup in Qatar. Public trust in MENA governments is weak, thanks to their ... END_OF_DOCUMENT_TOKEN_TO_BE_REPLACED

Palme d’Or winner "Boy from Heaven" is a classic crossover film in which cultural elements are mixed together in haphazard and random fashion. Shady Lewis Botros bemoans the ... END_OF_DOCUMENT_TOKEN_TO_BE_REPLACED

COP27 in Sharm el-Sheikh is turning into a PR disaster for Egypt’s military regime. Instead of praise for the host, the news is full of solidarity for imprisoned activist Alaa ... END_OF_DOCUMENT_TOKEN_TO_BE_REPLACED

END_OF_DOCUMENT_TOKEN_TO_BE_REPLACED
Social media
and networks
Subscribe to our
newsletter