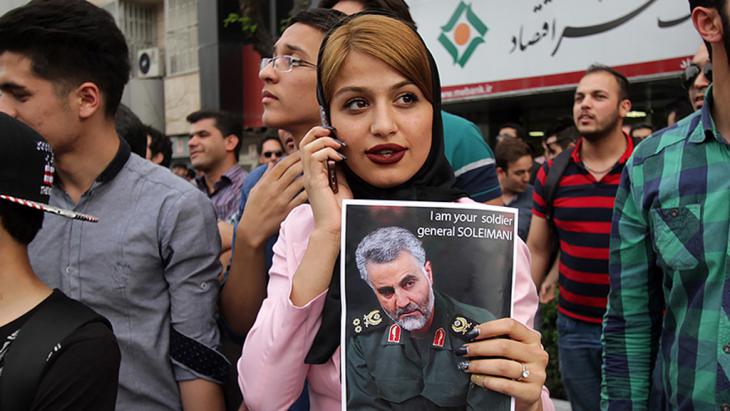 The role of Qassem Soleimani in Iraq

Reining in the lion

Until recently, General Qassem Soleimani, the commander of the Iranian Revolutionary Guards "Quds" Force, was still being hailed as a military hero and man for the future. But more and more details are emerging concerning his destructive role in Iraq. By Ali Sadrzadeh

"A lion in winter": was the sensational headline that appeared in the British magazine "The Economist" on 5 September. The publication is generally regarded as credible and serious.

The lion in question is General Qassem Soleimani, who is leading Iranian military engagement in Syria, Iraq, Yemen and Lebanon. "The Economist" revealed that his solo actions have been such a source of concern for the most powerful man in Iran, the Ayatollah Ali Khamenei, that he plans to place him under closer and more efficient control in the future. The man for the job is Mohsen Rezai. Rezai, who used to head up the Revolutionary Guards himself in his younger years, is today a pensioner who hung up his military uniform 20 years ago. His sudden reappearance in uniform in mid-August left many wondering. Asked why he was suddenly showing himself in both a new and yet familiar guise, Rezai gave an ambiguous answer. "I′m wearing the uniform again upon the request and with the permission of the Supreme Leader," the old man explained.

As was to be expected, the Iranian media ignored the "Economist′s" explosive revelations. But the story was seized upon by those Arab media that openly oppose Iran. Much of this coverage appeared to be initially speculative, with quotes from anonymous sources. It would also be illusory to expect any official or enlightening answers from the Iranian government concerning this affair, especially since a potential hiatus in the career of a powerful man  such as Qassem Soleimani is considered unsuitable material for public discussion.

But in the Internet and satellite television era, and considering the fact that the overwhelming majority of the Iranian population inhabits the virtual world, it is proving impossible to can such rumours completely – particularly as certain Arab media outlets such as "Al-Arabiya" continue to add more details, thus feeding the speculation.

The Iranian media′s silence over the mysterious general is only serving to stoke further gossip and suspicion. Until the beginning of July, Soleimani – who joined the 1979 Islamic Revolution as a village boy without any qualifications – was still being hailed as a legendary hero, a warrior with supernatural powers. Iranian media deemed the smallest detail of his life interesting and worth reporting. The propaganda surrounding him personally was so overwhelming, that many people in Iran started believing that only Soleimani alone could defeat "Islamic State" (IS). The general appeared to be the man of the moment, and even of the future. A film director even wanted to make a heroic epic about the commander of the Revolutionary Guards′ Quds Force, a man who owes all his knowledge and skills to the eight-year war with Iraq. But suddenly work on this project was stopped. 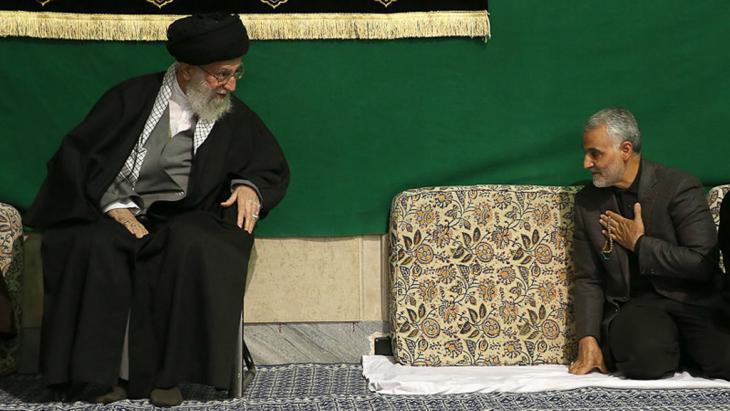 In the military service of Ayatollah Ali: Qassem Soleimani (r.) is head of an elite unit of the Iranian Revolutionary Guards, the Quds Force, which operates in foreign countries. Western governments and Israel accuse the paramilitary "Quds" of supporting militant groups in the Middle East. Soleimani participated in the war against the radical Islamist IS militia in Iraq

Recently the reasons for the sudden quiet surrounding the highly revered general have become clear. On this particular day, the website "Irandiplomacy" published several highly informative details and background on his destructive role in Iraq.

The reports at last provide a semi-official confirmation of the speculation that has been circulating in Arab media since September. This is because "Irandiplomacy" is managed by Sadegh Kharrazi, Iran′s former ambassador to France. Kharrazi is associated not only with the family of the deceased Supreme Leader Ayatollah Ruhollah Khomeini, but also with that of the most powerful man in Iran at the moment, Ali Khamenei – indeed he is viewed as a close associate of the cleric.

The reports not only provide us with details of the scale of Iran′s intervention in Iraq. We also discover how determinedly and imperiously Soleimani has been behaving in the neighbouring nation – and we can thus understand why many Iraqis perceive him as one of the destroyers of their country.

"Irandiplomacy" lists only three events, all of which occurred during the month of August, in other words, at the exact time when Iraqi Prime Minister Haidar al-Abadi was trying to prevent the implosion of his nation. These were days of continually increasing pressure from the streets to step up the battle against corruption, when the war against IS in the provinces of Mosul and Anbar was barely making any progress, and the Americans were repeatedly expressing their dissatisfaction with Al-Abadi′s government.

Al-Abadi saw himself forced to act. In a dramatic television address, he first announced that his government would reform Iraq from scratch, remove all "corrupt elements" from their posts, involve the "Sunni brothers" in the decision-making process and end foreign interference in the country.

As a sign of his resolve, the Prime Minister sacked his predecessor Nouri al-Maliki from his post as vice president; at the same time he issued an order to security forces at Baghdad airport to check all Iranian aircraft landing there with immediate effect. Up to that point, Iranian cargo planes had been arriving in Baghdad on a daily basis and no one had dared to check their contents, writes "Irandiplomacy". The report says the military transporters were in transit on the orders of Soleimani and carrying weapons for Syria and Iraq.

Armaments destined for Syria are often reloaded onto Iraqi planes, the website continues, with the rest distributed among Iraqi groups allied with Iran. A day after Al-Abadi′s order, attempts to check an Iranian aircraft triggered heavy clashes. The situation escalated because on this particular day, in addition to weapons, high-ranking members from the Revolutionary Guards – en route to Syria – had also arrived in Baghdad.

"Irandiplomacy" does not say how the row at Baghdad airport ended, or who eventually prevailed. But the airport is controlled by the Iraqi Transport Minister Hadi al-Ameri, a close friend of Soleimani. Ameri lived in Iran for 30 years and received his military training there with the Revolutionary Guards. In fact, his Iranian wife and his children still live in the Tehran neighbourhood assigned to high-ranking commanders of the elite unit. 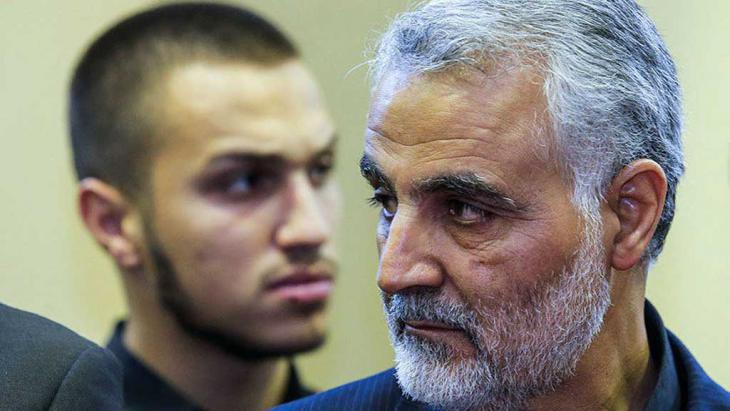 The downfall of the general: "The civil wars in the Middle East continue to rage unabated and produce more refugees by the day, while the Revolutionary Guard who is cloaked in mystery continues to tinker with his plans – but without any identifiable strategy," writes Sadrzadeh

The second event described in great detail by "Irandiplomacy" provides an insight into who has the last word in Iraq, and why Al-Abadi′s attempts at reform have stalled.

"You have no power"

It was 29 August. Prime Minister Al-Abadi had invited several influential leaders of paramilitary Shia groups to lobby their support for his programme of reforms. His predecessor Nouri al-Maliki, who had just returned from a trip to Iran, was also present. A week earlier, the Iraqi parliament had voted in favour of putting Maliki on trial for spiralling corruption and his failure in the fight against IS.

When Al-Abadi entered the meeting room on this day, he was shocked to notice that Soleimani was also present. Iraq’s prime minister and the Iranian general immediately clashed. Soleimani was the first to speak and launched an unusually caustic attack on Al-Abadi. "Your reform plans only serve the enemies of the Shias. Why do you want to disempower Maliki? Why have you not informed your allies of your plans? How do you plan to handle everything alone?! Without us you can′t achieve anything!", the general is quoted by "Irandiplomacy" as saying. The publication adds: "All those present were silent, only Maliki nodded in agreement."

In response to Al-Abadi′s question, regarding for whom Soleimani was actually speaking - "for the Iranian government or for yourself?" – came a telling answer from the Iranian general: "For me, for Iran and for all Shia groups in Iraq involved in the fighting." Soleimani then left the room.

The third event, which also took place at the end of August, is outlined by "Irandiplomacy" in just two sentences: US military advisers in Iraq had again complained bitterly to Al-Abadi because Shia paramilitaries in the IS-controlled province of Anbar had acted chaotically, arbitrarily and therefore counterproductively. The groups in question were regarded as  Soleimani′s allies.

Even for those who are familiar with the situation in Iraq, such details concerning Soleimani′s presence and actions in Iraq are interesting and revealing. It is even more remarkable that these details are coming from an organisation that is very close to the heart of Iranian power.

Does this mean that the "lion′s winter" has indeed begun? This conclusion is probably too hasty. Soleimani once wrote to the US General David Petraeus, that he, Soleimani, alone determined Iranian policies in Iraq, Syria and the entire Middle East.

But these policies are achieving little success. The civil wars in the Middle East continue to rage unabated and produce more refugees by the day, while the Revolutionary Guardsman cloaked in mystery continues to tinker with his plans – but without any identifiable strategy.

Home
Print
Newsletter
More on this topic
Profile: Qassem Soleimani: The man who pulls the stringsIran's role in the Iraq conflict: An ally, but not a puppetProtesting corruption and mismanagement in Iraq: Caught in the spotlight
Related Topics
'Islamic State' | IS, Ayatollah Ali Khamenei, Ayatollah Ruhollah Khomeini, Haider al-Abadi, Media in Iran, Nouri al-Maliki, Sunni-Shia tension
All Topics

International relations are shifting across the Middle East as regional powers adapt to America's retrenchment and China's growing influence. Although the region could become the ... END_OF_DOCUMENT_TOKEN_TO_BE_REPLACED

No other Western poet was arguably so well-versed in the Koran or so fascinated by Islam as Germany's national hero, Goethe. In a new publication that examines all Goethe's ... END_OF_DOCUMENT_TOKEN_TO_BE_REPLACED

A deluge of books, movies, series and cover stories: ever since the events of 9/11, the West has seemed almost manically preoccupied with Islam. Yet this has rarely led to deeper ... END_OF_DOCUMENT_TOKEN_TO_BE_REPLACED

Two decades after the attacks of 11 September 2001, the West faces the shattered debris of its failure – not only in Afghanistan, but also in Iraq, Syria, Libya and Yemen. What ... END_OF_DOCUMENT_TOKEN_TO_BE_REPLACED

Following the Taliban's power grab, members of the Hazara minority fear they will be targeted. Those who can, escape. Others have joined the armed opposition. But for many, there ... END_OF_DOCUMENT_TOKEN_TO_BE_REPLACED
Author:
Ali Sadrzadeh
Date:
Mail:
Send via mail

END_OF_DOCUMENT_TOKEN_TO_BE_REPLACED
Social media
and networks
Subscribe to our
newsletter