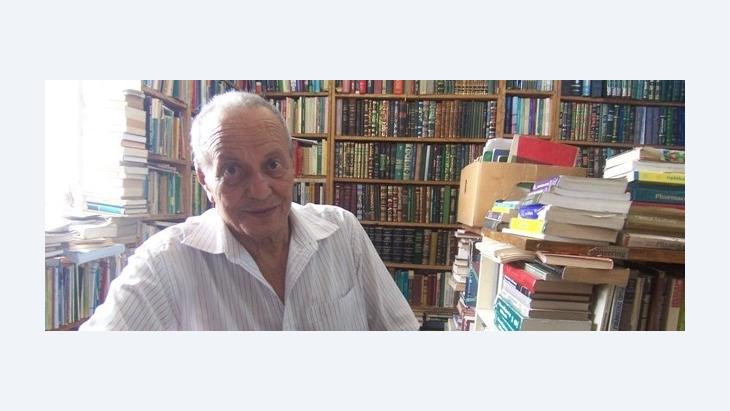 The Sabha Bookshop in Tripoli
Filling the Intellectual Void

The Sabha bookshop in Tripoli has become a meeting place for intellectuals and former army dissidents. The stories they tell paint a heart-rending portrait of how tough life was under Gaddafi and how thorough and comprehensive the repression of Libyans was. Alfred Hackensberger spoke to the shop's owner and some of its regulars

﻿The shelves are old and rickety and stacked with old, dusty books in Arabic, English and French, all of them from a very different era: the Cuban missile crisis, oil embargoes and the glory days of the Soviet Union. Tucked away in a corner beside the entrance is a set of German romance stories from the 1960s and even a copy of the classic German World War Two novel, Der Arzt von Stalingrad (The Doctor of Stalingrad) by Heinz G. Konsalik.

The Sabha bookshop (named after the eponymous city in the southern Sahara) has not been given a clean-up in a long time. "At times of revolution, such things do not matter," says owner Mohammed Bachbachi, who opened the shop 20 years ago. "I wanted to fight the ignorance of the regime," declares the 74-year-old, as he sits smoking a cigarette on the pavement outside his shop.

It is early on a Thursday evening; the weekend has just begun. No one works on Friday, the Muslim day of prayer, so Minzan Street is already crowded with people and cars, all heading for Martyr's Square (formerly Green Square), just around the corner, about 300 yards away. The once familiar sight of armed militia, wildly firing off rounds of ammunition into the air from their Kalashnikovs in the days following the defeat of Gaddafi, has gone. They have been replaced now by armed and uniformed patrols who are checking the bags of the passers by.

Left in peace by the intelligence services 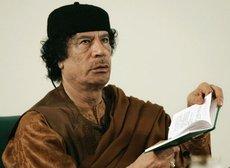 ​​Under Gaddafi, not just anyone could open a bookshop. As a former officer in the Libyan army, however, Bachbachi was able to get a permit. "I was in the army until 1979, and the intelligence services just believed I was one of them. They left me alone," says the elderly man whose broad smile belies the hardships he suffered during the 42 years of Gaddafi's dictatorship.

The Sabha bookshop had to tow the official line by selling Gaddafi's self-penned Green Book, a work the dictator himself held to be of more significance than the Communist Manifesto and Mao Tse Tung's Little Red Book together.

Every Libyan had to study it; there were daily readings on state television; it was part of the school curriculum, and chairs were established to teach it in the universities. The Green Book was published in 1975, two years after Gaddafi's "Cultural Revolution", a time when books that did not find official approval were publicly burned.

"I was selling other books under the table too," says the officer-turned-bookseller. "I wanted to do something against Gaddafi, not with a gun, but with education, to try to fill the intellectual void." It was never really a lucrative business, the 74-year-old admits. "Most people did not read. There was simply no money around to buy books, and no cultural life."

Hoping for a cultural explosion

Bachbachi was able to help and "above all inspire" many young people, he claims. He provided them with books on history, geography and medicine. But the really important books were those he managed to smuggle into the country from abroad: works critical of Gaddafi and of his regime.

"Of course, I told people how things were in the past, about the influence of Egyptian President Abdel Nassr, about the coup of 1 September 1969 that brought an end to the rule of King Idris I in Libya, and about how the revolution was hijacked by the 'Great Leader'."

With the dictator and his regime finally gone, Bachbachi is now hoping for a cultural explosion. Gaddafi suppressed the spirit of several generations, he says. The bookseller believes it will take at least 10 years to overcome the dictator's negative cultural legacy. Foreign language skills are almost non-existent among young Libyans. Only a few of the older generation can still speak English or Italian, the languages of the former European colonial powers.

At the universities, subjects such as sociology and politics were taught according to the Gaddafi method, while others – such as anthropology – did not feature at all. A complete degree programme was, however, dedicated to The Green Book.

The Sabha bookshop sees a constant stream of visitors until late in the evening. It is a place where small talk is welcome, perhaps with a cup of coffee: a macchiato, an espresso with frothy milk. Atja Dibani, however, turns down the offer of a coffee. "I just want to smoke a cigarette in peace," he says. Dibani and the bookseller go back a long way, from the time when they were at military academy together, in Benghazi, way back in 1937.

Dibani, a slim, muscular man with broad shoulders, looks younger than he is. He was once a major and an artillery instructor in the army. Consequently, his hearing is no longer quite what it should be. The story he has to tell shows just how pervasive the repression was through all sectors of society, including the military. 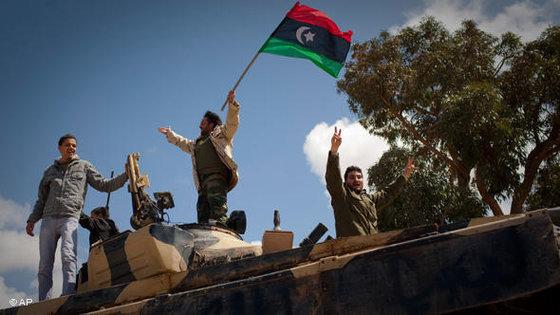 Bookshop owner Mohammed Bachbachi hopes that the Gaddafi era will be followed by a "cultural explosion"; at the same time, he fears that it will take at least a decade to overcome the dictator's negative cultural legacy

The shadow of the past

In 1970, he was dismissed from his post as army major, and along with around 200 other senior officers was simply replaced by a younger model. He went on to work for four years in the Libyan embassy in Malta before taking up a post at the Ministry of Planning. On his way to a Ministry assignment in Czechoslovakia back in 1983, he was arrested at the airport. The two colleagues with him were forced to leave him behind. As it transpired, the arrest was the prelude to a five-year horror of solitary confinement, without so much as a blink of the sun.

Incarcerated in a Libyan secret service prison, he had to occupy a windowless cell. "The toilet was down the corridor," he recalls, his eyes moistening. "Every day the guards permitted us just one minute to answer the call of nature. Before they led us out, they would scatter food to attract rats. These rats were so big and fat they were only able to slip through the hole in the floor that served as our toilet one at a time." With the recollection, words fail the former army man. He can barely muster a mumbled exclamation of "Oh God, Oh God," before the tears begin to flow.

Held without charge or sentence

He was never actually charged with any crime, nor ever even questioned. Some paper was simply pushed in front of him with the instruction "to write down whatever came into his head." Dibani gave them the bare required minimum of information; nothing personal. "Any more, and they would have tried to turn it into a written confession," he says, his eyes filling with tears.

After 15 months he was taken to the special unit of the Soani Prison in Tripoli, where his cell measured only a single square metre. There was no choice but to stand upright in the dark. Thirty minutes, once a week, was all the time he was allowed out for. At one point, he says, a sergeant came to his cell and yelled at him for making too much noise. "You will have to be punished," he was told. The punishment, as it turned out, was physical exercise, and marching up and down the corridor. "It was not a punishment to me," he explains. "Just the opposite, being able to move again was wonderful." The sergeant did him a great favour, he says, laughing. 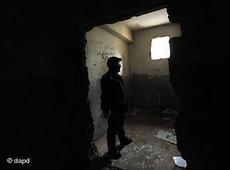 Under the eye of the state: many members of the army were incarcerated without charge or trial for political reasons; some remained in prison for years; others were tortured or even killed

​​The story is interrupted by the arrival at the shop of another customer. Abourazak Bilkeir is pleased to see his old friend once more and gives him an hearty slap on the back. Dibani, he says, "was my instructor at the military academy. Salt of the earth. One of the finest people I have ever known. Unfortunately, he followed me into prison."

Bilkeir, too, was an officer in the Libyan army. He was arrested in 1970 on a charge of attempting a coup. "They could not prove it, but we had been thinking about it," he says, amused. "It was the very first attempt at a coup against Gaddafi, only four months after he had seized power in September 1969." The broadness of the grin that accompanies this admission shows just how proud Bilkeir is of the memory.

It brought him 18 years in prison. He was finally freed during an amnesty in 1988. Another prisoner, released at the same time, was his favourite instructor from the military academy.

"I was lucky," Dibani says, "I had only five years in prison. What happened to me was nothing in comparison to the fate of the many thousands of Libyans; those who never got out, who were tortured and murdered behind bars."

Bilkeir interrupts him, trying to dispel the gloom. "Don't let it get you down," he tells his friend, and gives him another reassuring pat on the back. It is over and done with now, thanks to our brave young fighters. Let's order ourselves a cup of coffee. I don't have much time."

Home
Print
Newsletter
More on this topic
Libyan Writers in Exile: Active in Support of the UprisingLibya's Intellectuals under the Gaddafi Dictatorship: Suppression at Home – Flourishing in ExilePEN Award for the Egyptian Publisher Mohammed Hashim: A Father of the Revolution
Related Topics
Arab Spring, Arabellion, Arabic literature, Democracy and civil society, Education, Libya after Gaddafi
All Topics

Arab youth express their hopes and wishes for the New Year, spanning everything from civil and political rights, to education, to arts and culture. By Rafiah Al Talei END_OF_DOCUMENT_TOKEN_TO_BE_REPLACED

Ankara is seeking to improve its relations with several states in the Middle East – such as the United Arab Emirates, Egypt and Israel. There are several reasons for this. ... END_OF_DOCUMENT_TOKEN_TO_BE_REPLACED

Despite Syria's lengthy civil war, dictator Bashar al-Assad is now being courted by many governments in the Middle East as if nothing ever happened. The reasons for this vary. By ... END_OF_DOCUMENT_TOKEN_TO_BE_REPLACED

Racism exists in the Arab world. People with dark skin are discriminated against and often see their rights curtailed. Activists have had enough of such treatment and are starting ... END_OF_DOCUMENT_TOKEN_TO_BE_REPLACED

Unauthorised immigration to Europe went down at the peak of the pandemic. As EU countries re-open, migrant flows are back up. What does it mean for the EU – and for migrants? By ... END_OF_DOCUMENT_TOKEN_TO_BE_REPLACED
Author:
Alfred Hackensberger
Date:
Mail:
Send via mail

END_OF_DOCUMENT_TOKEN_TO_BE_REPLACED
Social media
and networks
Subscribe to our
newsletter