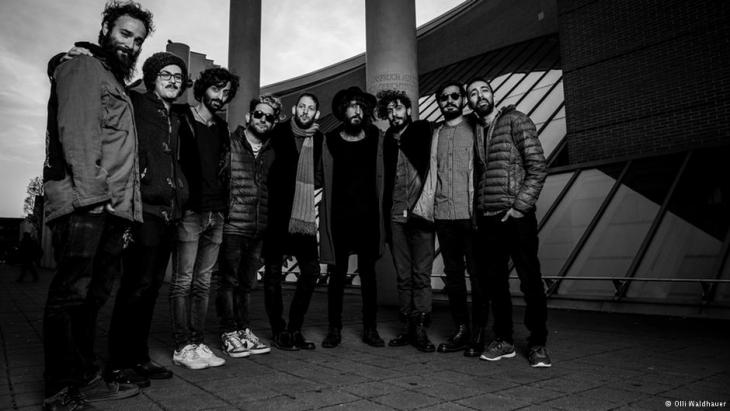 An Iranian and an Israeli band tour together

The political situation between their home countries may be tense, but that hasn't stopped an Iranian and an Israeli band from jamming together. Now the musicians are joining forces to tour Germany. By Heike Mund

In itself, the virtual project "The Secret Handshake" - for which the two bands initiated a net-based crowd-funding campaign - could have landed the Iranian indie rockers who call themselves Langtunes in jail. The four musicians live and work in the Iranian capital Teheran, where producing or publically performing Western music remains an offence punishable by law. Thus the band can only tour abroad. In 2012 they briefly toured Germany and stopped in the Turkish city of Istanbul. But their fans have long since found them online and enjoy their rocking indie flavor with English texts and guitar riffs. Their sound could be described as global rock music.

Together with the Israeli band Ramzailech, Langtunes recently launched an exceptional concert tour, starting in Leipzig and moving on to Hamburg (19 November) and Berlin (22 November) before winding up in Frankfurt on 3 December. The two bands are playing a total of thirteen concerts, each a stepping stone in the peace project they call "The Secret Handshake". Co-written songs are not (yet) part of the act, but the musicians say they are considering it. At this point, Ramzailech and Langtunes share the stage and their audiences. 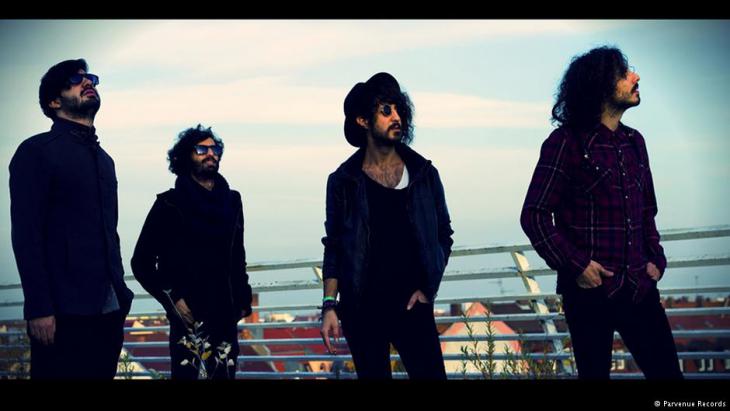 "The Secret Handshake": a crowd-funded tour to promote intercultural understanding and dialogue, breaking down barriers in the quest for peace and understanding

Ramzailech is a source of "hard core klezmer," and the yiddish texts with a daring mix of traditional Jewish klezmer music, punk and rock 'n' roll are well received. "There′s much, much dancing," says tour manager Elnaz Amiraslani. Both bands play fast, Oriental and with virtuosity. German audiences love it. How did the Yiddish band name come about? In Hebrew, one writes from right to left, so it's entirely possible that the Yiddish word "klezmer" gets read backwards sometimes. Add a couple of typos, and "Ramzailech" is the result.

A meeting of the peoples via music rather than political confrontation is the musicians' notion. They hope their concerts will serve as an impetus for more peaceful interaction – and not only between their respective homelands, which are bitter enemies. As recently as August 2015, the Iranian Ministry of Culture brusquely cancelled a concert scheduled to be conducted in Tehran by Daniel Barenboim, a citizen of Israel, declaring that it would "not collaborate with Israeli artists." The musicians of Langtunes take a different stance. "From the beginning, we were an underground band, which means you have to break some rules," lead singer Behrooz explained.

Musically, the two bands hail from utterly different worlds and fan cultures – but both are from the Middle East. That's what brings them together, said Behrooz: "Apart from our religion, we're not all that different. I'd say we have much more in common than we do with the Germans, for example." Both bands consider themselves global artists who just want to have fun together, he adds: "Our connection is purely musical and cultural. We don't see any political content in it." 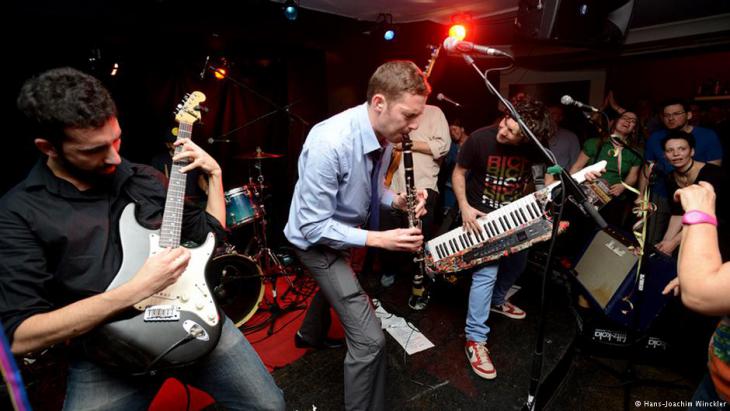 Ramzailech: a play on the word "klezmer" written backwards. The pace is fast and furious, exuberant and infectious - hard core, as the band themselves like to describe it. According to the tour manager Elnaz Amiraslani, there is always "much, much dancing"

On stage, the two bands work astonishingly well together, reported project manager Elmaz Almiraslani after the concert in Leipzig. Coming from Iran, she organises the intercultural concert tour and heads a music label in Germany, having invited Langtunes to the country for its first professional production. The release, in late 2014, would have been impossible back home. "There are cultural authorities in Iran," explained Almiraslani, "which you have to ask for approval for nearly any public activity, be it concert appearances, studio booking or CD production."

In 2014, the Israeli klezmer band Ramzailech happened to be touring Germany. Meeting backstage at a festival in Nuremberg, the musicians exchanged their views on the world. An idea was born, one of greater peace and understanding. "We asked ourselves: why not combine our activities, make a statement and link our cultures rather than fomenting antagonism?" says Amiraslani.

Ramzailech's members soon became aware of the risk their Iranian colleagues were taking, observed singer Gal Klein. "As far as we're concerned, we'd call off the tour immediately if we had to. Each person's safety is paramount. We don't talk about this in Israel and keep a low profile." But Langtunes' singer Beeroz sees less of a problem: "With us, that doesn't matter. As long as we can make music, we have to come to terms with the consequences. Sure, we're afraid, but clearly that doesn't stop us from giving concerts."

Interest in the crowd-funding project

The greatest obstacle was money of course. The musicians had to fund travel, accommodation and stage technology in Germany. The musicians from Iran couldn't just check in at Tehran Airport with equipment and instruments. At an estimated cost of 30,000 euros, the hastily-mounted crowd-funding initiative met with lively interest in the online community. Still, not enough contributors and sponsors were willing to commit, said tour manager Elnaz Amiraslani, somewhat disappointed. The bands had to cover the travel costs on their own.

But that didn't stop them from going ahead with their tour. "Our connection is purely musical and cultural. We don't see anything political in it," says singer Behrooz. "We're rock'n'rollers, and we can't stop just because we're scared." The online campaign on Indiegogo.com, a crowd-funding platform, will generate intercultural dialogue on a different level. Contributors can opt for free concert tickets, an Israeli-Iranian evening of cooking, or a personal appearance by the musicians at home.

Home
Print
Newsletter
More on this topic
"Tamburi Mundi" music festival: Summit of friendshipInterview with Ramin Sadighi from the Iranian music label Hermes Records: The fine line between what is permitted and what is notIn dialogue: Iskandar Ahmad Abdalla and Yuval Ben-Ami: Judaism and Islam – the beauty of the other
Related Topics
Dialogue of Cultures | Intercultural Dialogue, Dialogue of Religions, Free speech and censorship, Human rights, Iranian music, Jews in the Islamic world, Judaism | Jews, Musical worlds
All Topics

Nine victims of the right-wing extremist murderer of Hanau had a migration background. The motive for the crime is clear and unambiguous: racism. Sheila Mysorekar from the "Neue ... END_OF_DOCUMENT_TOKEN_TO_BE_REPLACED

The template of the mentally disturbed gunman doesn't fit. Seeing himself as a spearhead, heralding a new rise to power, the murderer of Hanau placed himself squarely in the Nazi ... END_OF_DOCUMENT_TOKEN_TO_BE_REPLACED

A newly leaked document confirms how China is imprisoning Muslim minority Uighurs based solely on their religion. Naomi Conrad met with a whistle-blower and visited relatives of ... END_OF_DOCUMENT_TOKEN_TO_BE_REPLACED

Education is the key to the future. Muzoon Almellehan has known this since she was 14 years old. But she lives in a Jordanian refugee camp. And since then she has been fighting ... END_OF_DOCUMENT_TOKEN_TO_BE_REPLACED

Michael Frey has written a fascinating book about the contemporary political thinker Nassif Nassar. Since 1967, Nassar has devoted his life’s work to the question of a fair social ... END_OF_DOCUMENT_TOKEN_TO_BE_REPLACED

The Kurdish YPG militia did the heavy lifting in the fight against the "Islamic State", yet many foreign YPG adherents, including Germans, have come home to find themselves under ... END_OF_DOCUMENT_TOKEN_TO_BE_REPLACED
Author:
Heike Mund
Date:
Mail:
Send via mail

END_OF_DOCUMENT_TOKEN_TO_BE_REPLACED
Social media
and networks
Subscribe to our
newsletter