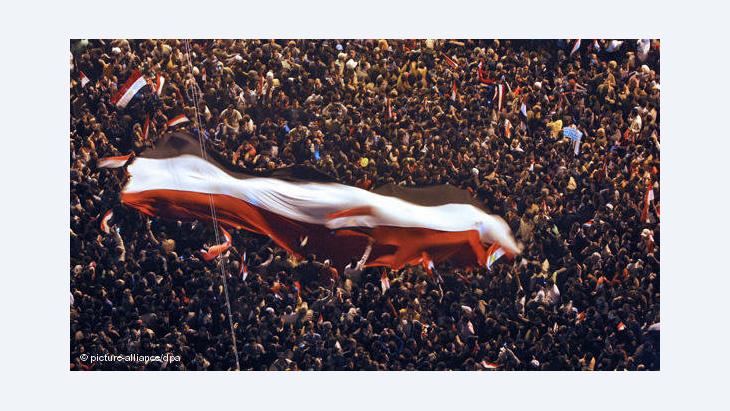 The Soundtrack of the Arab Spring

What kind of music characterized the revolutions in Tunisia and Egypt in early 2011? How did musicians in these countries react to the political upheavals? A new album from the world music label "World Network" presents the music of the Arab Spring. Martina Sabra introduces the song collection

Did something happen? Where is the wave of hope that engulfed North Africa and the Middle East in early 2011? In light of the horrors that have taken place in Libya and Syria, as well as the unstable political situation in Tunisia and Egypt, many expect the Arab Spring to be followed by a long and unpleasant winter.

Despite all the setbacks and justified doubts, one thing is certain – the Arab world has opened a new chapter in its politics. In terms of how this transformation was reflected in music is the task that the world music label "World Network" set out to document. The result is a new album with the title "From the Kasbah/Tunis to Tahrir Square/Cairo and back" produced in Frankfurt, Germany, under the direction of Christian Scholze.

Multi-facetted musical culture of the Maghreb

Under the motto "Our weapons are our dreams", a total of 14 works of music can be heard on the CD. All the recordings are more or less closely related to the events that took place in Tunisia and Egypt in early 2011. The young Arab revolutionaries captivated the international public in those electrifying days and weeks not only through their new forms of protest action and mobilisation strategies, but also with their rich and multi-facetted musical culture.

Whether in the Kasbah in Tunis or on Tahrir Square in Cairo, everywhere one could hear politically engaged and often satirical rap and pop songs. Rap clips and hymns in praise of freedom were quickly posted on the Internet, while on the street, spontaneously cobbled together bands helped to provide for a hearty revolutionary mood. It should not be overlooked that the singing of protest songs and reciting critical poetry helped bolster courage among the demonstrators on Tahrir Square and in the city centre of Tunis during those precarious times. 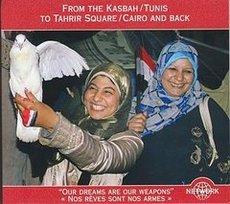 Rich and multi-facetted musical protest culture: the cover of "Soundtracks of the Revolutions in Tunisia and Egypt – 'Our dreams are our weapons'"

​​With all but one exception, none of the tracks on this sampler have been previously released. The range of genres spans from electro-rap to traditional Arab song and from conventional pop music to challenging acoustic fusion and voice/sound experiments.

All the tracks can be divided up into two categories. The first includes those songs that were composed months before the start of the revolutions and were later "adopted" by the political movements. These include the Tunisian revolutionary rap "Head of the Country" by El General (Hamada Ben Amor) and the rock song "Ezzay – Why?" by the Egyptian superstar Mohamed Mounir.

The second category of tracks are those that arose under the direct influence of revolutionary events. One of the highlights here is the catchy pop tune "Sawt El Horreya – The Voice of Freedom," composed and performed by the Egyptian musicians Hany Adel and Amir Eid.

Not all of the songs sound so young and carefree. Many of the lyrics on the album display a strong sense of pathos, expressing the fury of revolutionary events. "The hopes of the people have become a thorn in the throat of the tyrant" blares out the Tunisian singer Zohra Lajnef, whose clips on YouTube were watched thousands of times during the revolution. With her expressive and well trained voice, her musical talent impresses the listener.

Other musicians gush with poetic enthusiasm, like the Tunisian Skander Guetari, who interprets a text by Khaled Oueghlani: "Speak, my Tunisia! Your children are your eyes, the moon and the stars are your nights, and the flowers your civilization."

A musical and cultural idol across the Arab world, Sheikh Imam's songs remained banned in Egypt long after his death in 1995. They are now part of the "soundtrack of the revolution"

​​Next to such emotionally charged, yet musically simple songs, the album offers some sophisticated instrumental tracks. The intricate virtuoso improvisation of the Egyptian brothers Joseph and James Tawadrsos (playing lute and percussion) and the pieces composed by the duo Amine und Hamza (lute and Arabic zither) in honour of the revolution are equally stirring.

In these tracks, the relationship to the revolutions is perhaps not as directly perceptible as that of the song by the Tunisian artist Alia Sellami. With a striking a-cappella performance and the alternately spherical and alarming sounds of empty glass bottles, her song "Revelation" displays all the intensity and fragility of revolutionary emotion – joy and sadness, fear and anger, doubt and hope. "The fire blazes and your stars disappear from the firmament. You want to envelope us in silence and bury us. Yet, we have awoken, we have arisen, and have decide to be free men."

In principle, this album is a very good initiative. Yet, the listener might wonder, though, if it would have been better if the producers had taken a little bit more time in formulating their conception. On-site sound collages with original recordings of demonstrations in Tunis and Cairo would have given the album a more authentic air and made it less sterile. This would have also provided a better historical context for the music, as well.

Many of the songs that were sung on Tahrir Square during the revolution were originally composed by the late folk singer Sheikh Imam and the still active poet Ahmed Fu'ad Nigm. Sheikh Imam was denied permission to perform in Egypt for almost his whole life and his songs remained banned long after his death in 1995. Despite this, many of the songs by the duo Imam & Nigm have remained popular for decades. They were passed on from generation to generation, not only in Egypt, but throughout the whole Arab world.

Only after the revolution could they be sung openly for the first time. If one wants to obtain a realistic impression of the soundtrack of the revolutions in Egypt and Tunisia, then the songs by the duo Imam/Nigm simply can't be ignored.

Soundtracks of the Revolutions in Tunisia and Egypt: "Our dreams are our weapons," World Network 495135 (with extensive sleeve notes in German, English, and French)

A reading tip on the songs of Sheikh Imam: Kamal Abdel Malek – A Study of the Vernacular Poetry of Ahmed Fu'ad Nigm, Brill 1997

While Bashar al-Assad is still shunned by the West, which blames him for a decade of brutal war in Syria, a shift is under way in the Middle East, where Arab allies of the United ... END_OF_DOCUMENT_TOKEN_TO_BE_REPLACED

Unauthorised immigration to Europe went down at the peak of the pandemic. As EU countries re-open, migrant flows are back up. What does it mean for the EU – and for migrants? By ... END_OF_DOCUMENT_TOKEN_TO_BE_REPLACED

Newly discovered aerial photographs taken by the German Luftwaffe show what a keen interest the Germans took in British-controlled Palestine during the Second World War. Not only ... END_OF_DOCUMENT_TOKEN_TO_BE_REPLACED

Religions are often a source of conflict. But the worldwide Religions for Peace movement seeks to change that by galvanising interreligious dialogue. Delegates from 90 countries ... END_OF_DOCUMENT_TOKEN_TO_BE_REPLACED

Berlin's annual Human Rights Film Festival closed at the weekend. One entry to the festival was the documentary "Captains of Zaatari". Its Egyptian director Ali El Arabi focuses ... END_OF_DOCUMENT_TOKEN_TO_BE_REPLACED

Two refugees detained in Egypt are facing deportation to Eritrea. The expulsion of the Eritreans, who have been incarcerated in Cairo for more than eight years, has been halted ... END_OF_DOCUMENT_TOKEN_TO_BE_REPLACED
Author:
Martina Sabra
Date:
Mail:
Send via mail

END_OF_DOCUMENT_TOKEN_TO_BE_REPLACED
Social media
and networks
Subscribe to our
newsletter