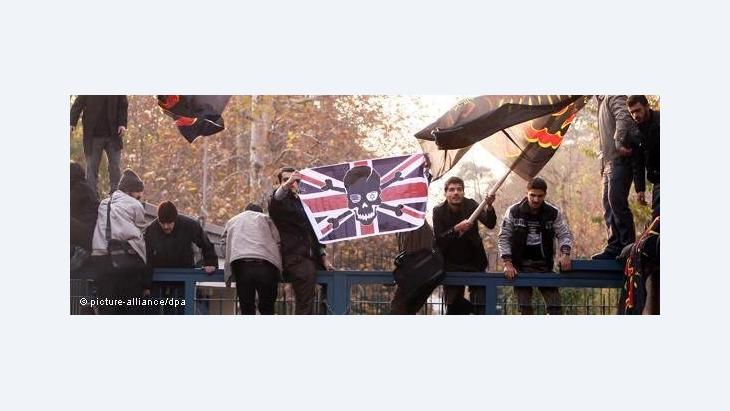 The Storming of the British Embassy in Tehran

﻿The West is increasing its economic pressure on Iran because it is suspicious of the Iranian nuclear programme. For its part, Iran is accusing the West of taking covert action against its nuclear and military programmes. According to Mehdi Khalaji, in this climate, Iran might become so fearful of an overt war that it starts one itself

As the West ratchets up its economic pressure on Iran to halt its drive to develop nuclear weapons, the Islamic Republic's rulers are not sitting idly by. Since Iran lacks the soft power and the economic capacity to counter Western pressure, it is likely that its leaders will resort to threats, and even to force, to prevent the West from cracking down further, as the recent attack on the British embassy in Tehran shows.

Iranian authorities claimed that angry "students" spontaneously stormed the embassy. Inside, they seized documents and set others alight and took six embassy employees hostage. It was only much later that the crowd came under police control and the hostages were set free.

The scene was quite familiar. In 1979, the United States embassy was also attacked by angry "students", fuelling enmity between the two countries that continues to this day. Ayatollah Ruhollah Khomeini was not aware of the students' plan in 1979, but he later endorsed their actions and made anti-Americanism a pillar of Iran's foreign policy.

​​Iran today is not the revolutionary Iran of 1979. Thirty-two years after the Islamic Republic was established, Iran's tactics are obvious to everyone. The so-called students are members of the Basij militia, which was ordered to attack the embassy, with the police only pretending to stop them.
In the government's thinking, it does not have to accept responsibility for the attack; the attackers' identity will remain a mystery, and no one will even be accused of or tried for breaking the law.

The Fars News Agency, which is affiliated with Iran's powerful Revolutionary Guard, has called the British embassy a "lair of espionage" – the same term used to describe the US embassy in 1979. This is not the first time that a European or British embassy has been attacked by the Basij. But the stakes are higher now than ever before.

In response to Iran's nuclear programme and Iranian banks' money-laundering activities, Britain sanctioned the Central Bank of Iran. As a result, Iran felt compelled to respond – and not solely with the assault on the British embassy: a few days prior to the attack, a majority in the Iranian parliament voted to downgrade the country's diplomatic relations with Britain.

Reacting to mounting fear of Western military action against Iran's nuclear facilities, Revolutionary Guard commanders recently sharpened their rhetoric against the US and Israel. Amir Ali Hajizadeh, commander of the Guard's Aerospace Division, said that in the event of war, "NATO's missile-defence installations will be attacked by Iran." Moreover, he threatened that Iran's armed forces would not remain quiet if "economic and cultural pressures" continued.

Likewise, Yahya Rahim Safavi, Supreme Leader Ayatollah Ali Khamenei's military adviser and a former commander-in-chief of the Revolutionary Guard, appealed to Iranian officials not to confine their threats to words, but rather to respond with military action. He not only argued that Iran's strategy should be offensive rather than defensive, but also threatened that Tel Aviv would be attacked by Hamas and Hezbollah if Israel went to war with the Islamic Republic.

Has the war already started?

According to Khalaji, "this is not the first time that a European or British embassy has been attacked by the Basij. But the stakes are higher now than ever before"

​​Some experts argue that if covert operations against Iran's nuclear and military programmes – such as the assassination of nuclear scientists and explosions at the Revolutionary Guard's missile arsenals – are already taking place, war has already begun. Indeed, Khamenei and Revolutionary Guard commanders believe that covert war will inevitably become overt if Israel and the West truly believe that Iran is approaching a dangerous point in its nuclear programme.

Khamenei recently stated that "we should threaten [the West and Israel] in response to their threats", which prompted Armed Forces Deputy Chief of Staff Brigadier General Mohammad Baqeri to conclude that Khamenei's remark meant "revising [Iran's] defence strategy."

Obviously, Revolutionary Guard commanders will not divulge what the new strategy is. Instead, they hope that their own covert action might stop the West from applying more sanctions and greater pressure. Thus, the West's main concerns should stem not from Iran's official responses, but from "independent elements", like those that attacked the British embassy. Recently, the US accused an Iranian-American of being instructed by a member of the Quds Force (a Revolutionary Guard unit tasked with carrying out foreign operations) to assassinate the Saudi ambassador in Washington.

Back in 2007, Iranian forces captured a group of British sailors in the Persian Gulf, releasing them a few weeks later under strong pressure from the United Kingdom. With tensions much higher today, however, such acts – even if carried out by unknown or unofficial groups – can trigger war. Indeed, Iran might become so fearful of an overt war that it starts one itself.

From the Kingdom of Elam to Alexander the Great, to the Shah dynasties and the Islamic Republic, Iran's cultural sites reflect its long history. ... END_OF_DOCUMENT_TOKEN_TO_BE_REPLACED

The assassination of the Iranian general Qassem Soleimani in a surprise U.S. drone strike is being used by the Islamic Republic of Iran to political ends, says Iranian journalist ... END_OF_DOCUMENT_TOKEN_TO_BE_REPLACED

In recent years, Tehran had pushed a clever public-relations campaign to depict Soleimani as a Napoleon- or Caesar-like warrior-poet. He was even mooted as a likely presidential ... END_OF_DOCUMENT_TOKEN_TO_BE_REPLACED

Trump’s sweet revenge could swiftly turn bitter, after all the U.S. attack is a direct declaration of war against the Iranian Revolutionary Guard and its elite Quds troops ... END_OF_DOCUMENT_TOKEN_TO_BE_REPLACED

With "Assad or We Burn the Country", Sam Dagher has furnished the world with some genuine ammunition against the Syrian regime's on-going campaign of disinformation. The only ... END_OF_DOCUMENT_TOKEN_TO_BE_REPLACED
Author:
Mehdi Khalaji
Date:
Mail:
Send via mail