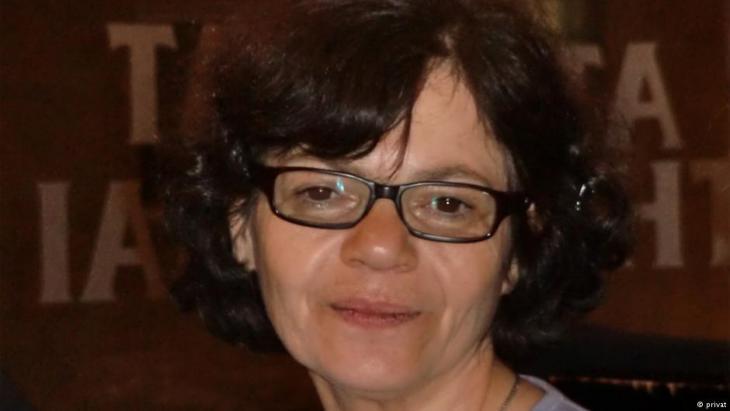 Baradaran: Left-wing women were subject to the religious commandment "ertedad" (apostasy). According to this commandment, women who fall away from the faith must be imprisoned until they repent or die. Many left-wing women were ordered to receive 25 lashes a day during prayer times. The whipping lasted as long as the prayer.  Mujahideen women were executed even though they were Muslim believers. In the tract where I was sitting, there were 44 mujahid women in total, all of whom were executed. There was a team of three in Tehran, the so-called "Death Commission". They asked the Mujahideen: "What do you think of the Islamic Republic? How do you feel about your organisation? If the prisoner said, "I am a mujahideen," it was enough to be executed.And how did they deal with left-wing activists?

Baradaran: They were asked: "Are you a believing Muslim? If this question was answered in the negative, it meant execution. When someone said, "I was born into an Islamic family", other questions were asked, such as: "Do you pray?" And then, depending on the arbitrary verdict arrived at by these judges, the prisoners were either executed or not.

So you could escape death by lying?

Baradaran: Yes. But most prisoners had no idea what these interrogations were ultimately for. Some thought it was simply a matter of separating certain groups within the prison.

Why did the regime end the mass executions? Why not eliminate all left-wing prisoners and mujahideen?

Baradaran: There are no plausible reasons for this. But I assume that the regime was convinced that it had spread enough terror with these mass executions to silence its political opponents. By not prolonging the horror they prevented the possibility of protests by families and human rights activists. 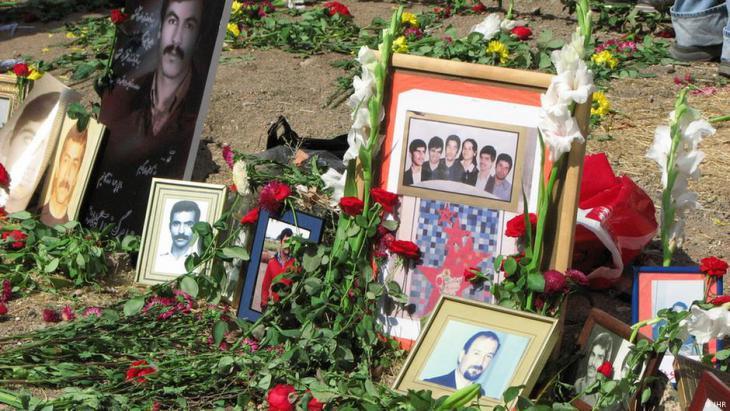 Khavaran Cemetery - mass grave of the opposition: at first sight fallow land, Khavaran hides the mass graves of executed dissidents. A place synonymous with the systematic elimination of sections of the Iranian opposition in the 1980s

So you donʹt believe that criticism within the regime could have been a reason for ending the massacre?

Baradaran: Ayatollah Montazeri – heir presumptive to Revolutionary Leader Khomeini – who later fell out of favour and was placed under house arrest, did protest. Not so long ago, a recording was published in which he spoke to the judges who had sentenced the prisoners to death in the summer of 1988. On these recordings he expresses outrage at what happened. Then we hear the judges talking about the role they played in a totally off-hand manner, as if they werenʹt talking about killing people, but about some business matters.

Apart from those responsible, was everyone else really in the dark about these secret executions?

Baradaran: Of course not, some bits of information inevitably leaked out. The families knew that the visiting ban could not be a good sign – that something unusual was going on. So they kept gathering in front of the prisons and asking for explanations. They also informed foreign countries about what was happening, finally human rights organisations such as Amnesty International got wind of it. Some Friday preachers in Iran like Rafsanjani or Mousavi Ardebili had also dropped terrible hints. But nobody knew about the real extent of the executions.

Baradaran: No.Which of your fellow prisoners were executed?

Baradaran: They were all political prisoners, the majority of whom had been imprisoned since 1981 and had long since been sentenced. Many of them had served their sentences and should have been released. The majority still remained true to their political beliefs.

When and how did you first hear about the executions?

Baradaran: At the beginning of the second summer month, three Mujahideen supporters were collected from our wing for the first time. None of us had received a visiting permit for weeks, which worried us. The Mujahid women didn't come back and my instincts said something terrible had happened, because it was clear that they hadn't been released. But nobody knew what had happened to them. Only when we once again allowed to receive visitors, did we realise the full extent of the executions.

There has been a lot of investigation in recent decades to shed light on what happened that summer. What has been the outcome? 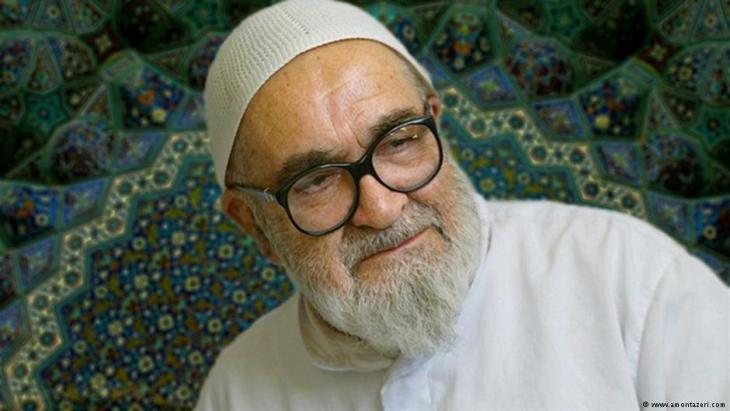 Shortly before Khomeini's death, Grand Ayatollah Ali Hussein Montazeri dared to criticise the mass executions of 1988, in which up to 4,000 political prisoners were allegedly executed. In the recording of 15 August 1988, Montazeri, at a meeting with representatives of the judiciary and the Ministry of Information – including today's Iranian Minister of Justice Mostafa Pourmohammadi – said that those present were responsible for the mass executions of 1988: "you are responsible for the greatest crime of the Islamic Republic of Iran and will go down in history as villains," said the Grand Ayatollah

Baradaran: We owe a tremendous debt to the so-called "Mothers of Khavaran" (the mothers of the political prisoners killed in the mass executions). For years, through their meetings in the Khavaran cemetery (where many of the executed are buried in mass graves), in front of the Tehran Justice Department, and through open letters to those responsible, they kept on drawing attention to the mass executions, even ensuring their voices were heard abroad. Gradually other women joined them. They wanted and still want to know why their children, husbands or siblings were executed and where they are buried. These are questions that remain unanswered.

Various initiatives then kicked off abroad. Among other things, the Borumand Foundation commissioned British judge Geoffrey Robertson to research the case and prepare a legal opinion. He talked to survivors and contemporary witnesses, including myself, and announced in 2010 that the mass executions of the summer of 1988 could be described as crimes against humanity.

There was also a so-called Iran Tribunal, a Truth Commission...

Baradaran: Yes, consisting of several international judges who dealt with the issue and symbolically accused the Islamic Republic.

Baradaran: This is an important question for which I have no plausible answer. The mothers in Argentina were supported by the media and human rights activists in all continents, even by the Pope. Unfortunately, the "Mothers of Khavaran" have not received the same international support. Perhaps the black and white image of Iran in the media is a factor. Your either romanticise Iran or you show focus on the dark side. The fact that there is resistance and striving for justice, for which these several hundred mothers stand, does not really fit into this picture. Whatʹs more, the defence of human rights has become institutionalised – like for instance in Germany. We are no longer living in the 1970s or 1980s, when thousands of people took to the streets for democracy and human rights. Today, people prefer to sign petitions on the Internet.

Do you think that at some point these crimes will be exposed for all to see?

Baradaran: Definitely. Thanks to modern digital communications, especially via the social networks, more and more Iranians now know about these horrible events. In contrast to the 1980s, the mass executions of summer 1988 are no longer just a matter for the families of the executed, but for society as a whole. The younger generation is showing an interest in these political crimes. And this gives me hope – indeed certainty – that at some point in the foreseeable future these events will be subject to comprehensive clarification. For this to happen, however, we – the activists and the families of the executed – need the solidarity of the international community.

In the run-up to Iran’s parliamentary elections on 21 February, state media was at full blast. Urging Iranians to take to the polls, state TV’s Channel 1 ran an election-day ... END_OF_DOCUMENT_TOKEN_TO_BE_REPLACED

The 2015 Joint Comprehensive Plan of Action with Iran is in jeopardy. European governments should use the JCPOA’s dispute-resolution mechanism both to pursue immediate measures to ... END_OF_DOCUMENT_TOKEN_TO_BE_REPLACED

Mullahs, dictatorship, nuclear conflict – Iran could be reduced to these keywords if one were to rely only on the articles in the daily press. But to really understand a country ... END_OF_DOCUMENT_TOKEN_TO_BE_REPLACED

Many predominantly Muslim countries have penal laws against "blasphemy", "defamation of religion" and "apostasy". In practice they serve as highly effective weapons to settle ... END_OF_DOCUMENT_TOKEN_TO_BE_REPLACED

Iranian-German artist Parastou Forouhar, resident in Germany since the 1990s, is known for her idiosyncratic drawings, photographs, installations and animations. ... END_OF_DOCUMENT_TOKEN_TO_BE_REPLACED

These days you might be forgiven for wondering whether international relations would be better served by artists than politicians. Iranian Kayhan Kalhor, a bridge builder from the ... END_OF_DOCUMENT_TOKEN_TO_BE_REPLACED
Author:
Farhad Payar
Date:
Mail:
Send via mail

END_OF_DOCUMENT_TOKEN_TO_BE_REPLACED
Social media
and networks
Subscribe to our
newsletter